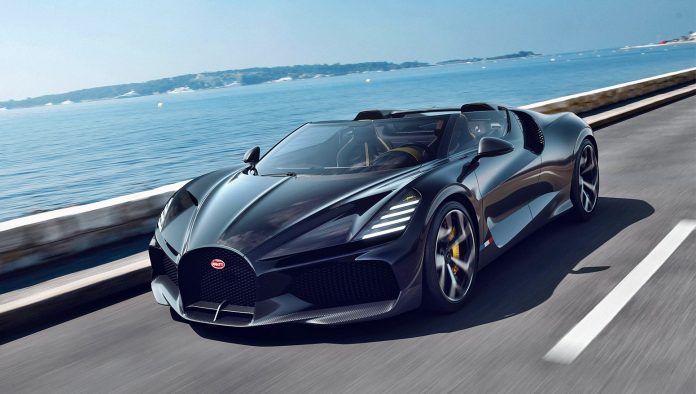 Well over 40% of all Bugatti vehicles ever created have been open-top in design but in the Chiron era, a roadster was never offered. Therefore, as a farewell to the legendary W16 powerplant, Bugatti decided to create a roadster which it has named the W16 Mistral.

“The introduction of the W16 Mistral continues the legacy, and also opens the next chapter in the Bugatti roadster story, inspired by over a century of open-top legends,” said Mate Rimac, CEO of Bugatti Rimac.

Being a very special Chiron, much consideration went into the name it should have. Inspiration came from the mistral, a powerful wind that blows from the Rhone River valley, through the chic towns of the Cote d’Azur in southern France and into the Mediterranean.

Built around the 1,600 ps W16 engine, first used in the Chiron Super Sport 300+, the W16 Mistral offers superlative performance unlike any open-top car. Its design and engineering is completely bespoke. The existing monocoque is not simply cut off above the A-pillars to make way for the new open-top design but has been reengineered and reshaped to create a more rounded silhouette without compromising performance.

“We know the W16 Mistral will always have significance in the story of Bugatti, marking the last time that perhaps the greatest ever automotive powertrain is used in a roadgoing production car. We, as a design team, felt enormous pressure to deliver styling that immediately conveyed this landmark moment, drawing inspiration from some of the most beautiful roadsters in Bugatti history,” said Achim Anscheidt, Bugatti’s Design Director.

As they considered the project, they looked at the 1934 Bugatti Type 57 Roadster Grand Raid (pictured above), a sporting roadster that represented the pinnacle of elegant design. Marked out by its dual aerodynamic headrests, flowing backwards into the bodywork, and a cut down V-shaped windscreen, this particular Grand Raid was effortlessly sophisticated with an understated sportiness. Finished in a duo-tone black and yellow livery, it would provide the perfect inspiration for this watershed moment in the Bugatti story.

The W16 Mistral has colours inspired by the Type 57 Roadster Grand Raid. A warm black with hints of truffle brown and subtle yellow accents can be seen throughout. Not only is it homage to the iconic coachbuilt body, but also to Ettore Bugatti, who chose the black and yellow combination for many of his personal cars.

The open-top hypercar also captures the essence of the Grand Raid’s V-shaped windscreen and evolves it into a modern-day work of art. A curving windscreen that seemingly wraps around the A-pillars, blending seamlessly into the side windows and creating a ‘visor’ effect that hints at the motorsport levels of performance available. The windscreen itself is a marvel of engineering, curved just enough to create the rounded visor design, without distorting the driver’s vision.

The top line of the windscreen and side windows flows purposefully around the side air intakes. This character line then flows back underneath the side glass to shoot through all the way to the front horseshoe grill creating a new three-dimensional character for the famous Bugatti C-line introduced on Chiron.

To keep the body side section slim, but also allow for optimum airflow to the W16, the oil cooler intakes on the side were deliberately separated from the engine air intakes, which now sit on the roof, just behind the occupants.

“To reflect the W16 Mistral’s new character, we also totally reinvented its frontal appearance, in line with the vertical layout of our unique or few-off models like Divo and La Voiture Noire. It’s immediately imbued with a sense of exclusivity; the vertically stacked headlights are completely bespoke and the famous horseshoe grille is reimagined to be much more three-dimensional; both deeper and wider. At the rear, we challenged ourselves to create a striking but also more elegant iteration of Bolide’s X-theme taillight motif, which forever left its mark on the world of automotive design,” Anscheidt explained.

The headlights themselves are intricately shaped, incorporating a 4-light signature that subtly nods to the W16 Mistral’s 4-wheel-drive and 4 turbochargers. But their 3-dimensional surface also functions as an aerodynamic aid that funnels air through the light and out through the wheelarch to improve aerodynamic drag. The wider horseshoe grille allows the high temperature engine radiator to be fully fed purely from one intake, leaving the two side intakes to focus only on providing air to the intercoolers.

The X-taillight, meanwhile, serves the function of venting the side oil coolers through ducts connecting the triangular negative space in between the X beams to the side radiators. Therefore, a pressure drop is created between the side intakes and the outlets at the back, which helps to manage the mid-temperature cooling circuit of the engine most effectively.

Other engineering innovations can be seen in Bugatti’s advanced composite materials are paired with cutting-edge titanium and aluminium 3D-printing for the striking design. A detailed analysis of the W16 Mistral’s dynamic stiffness allowed engineers to develop lightweight solutions that would ensure optimum handling and performance under the most extreme conditions.

The interior follows that in the Chiron, providing an experience that’s both elegant and luxurious, but also functional enough to ensure all information is easily visible at up to 420 km/h. The dedication to material quality remains a hallmark of Bugatti design, with advanced, lightweight titanium, aluminium components milled from a solid block and soft, blemish-free leathers.

An intricate woven leather is used on newly designed door panels, meticulously tested and produced to Bugatti quality standards that envision regular use for over a hundred years into the future. The gear shifter – machined from a solid block of aluminium – features a touch of wood and an amber insert with Rembrandt Bugatti’s famous ‘dancing elephant’ sculpture locked within.

“The union of a roadster format and our W16 powertrain is absolute perfection. With the roof removed, and a pair of large air intakes directly behind your head feeding around 70,000 litres of air through the engine every minute at full bore, driving the W16 Mistral connects you to the intricate workings of this revolutionary powertrain like no other Bugatti to date,” declared Rimac.

Only 99 units of the W16 Mistral will be built, each with an ex-factory pricetag of 5 million euros (about RM22.4 million). Orders are no longer accepted as the entire production run has already been taken, with first deliveries due to being in 2024.