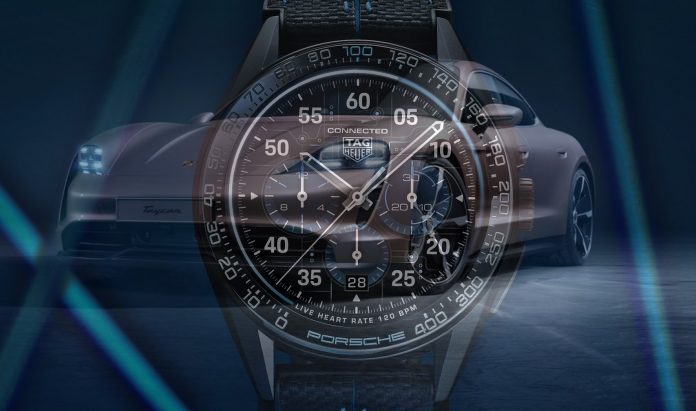 Most people have their smartphones with them all the time, and as these devices show the time and date, the watch may seem unnecessary. Nevertheless, it still has a place in our lives and sales still continue. Now Porsche owners will also find more reason to wear watch – specifically the new TAG Heuer Connected Calibre E4 – Porsche Edition.

This is a new luxury connected timepiece that does more than just show the time and other information usually found on the more sophisticated (and expensive) watches. It has Wear OS which can show information from Porsche vehicles on its face, turning it into a more useful accessory.

The watch follows the launch of the TAG Heuer x Porsche Carrera Chronograph, which celebrated the two companies’ rich history of motor racing heritage and the launch of their global partnership in 2021.

Both the physical watch and the software have design features used in the all-electric Taycan, which evokes the car’s exterior. The watch face was inspired by printed circuit boards and racing circuits, offering an animated visual effect which connects Porsche’s models and TAG Heuer watches with a feeling of technology and speed.

Car-related design
The design of the TAG Heuer Connected Calibre E4 – Porsche Edition has numerous features inspired by the frozen blue lacquered Taycan electric sportscar. For example, the large 45 mm case in black titanium is highlighted with details in the distinctive metallic shade seen on the car. The case is sandblasted black titanium, giving the watch a light, sporty feel and the black ceramic polished bezel has a dedicated scale going from zero to 400, referencing a Porsche car’s speed, which can be used to read functions relating to the car or to display metrics like heart rate.

The ceramic bezel of the watch gives it the feel of a traditional high-end timepiece. The crown has a large diameter, and stands out from the watch, so there’s lots of room for a finger to access the crown, making it easy to access apps on the go.

The pushers have a mechanical feel, highlighting TAG Heuer’s 162 years of heritage in making high-end mechanical watches. Running a customised version of Google’s Wear OS system, the watch offers a range of exclusive timers and sport and wellness apps which highlight TAG Heuer’s expertise in sports timing, including motorsports.

Connection to the car
Owners of specific Porsche models will be able to connect their watch to their vehicle. When connected, they will see information displayed in ‘complications’ on the watch face. At the time of launch this week, there are four complications available.

The first shows how much energy is left in the car’s battery pack and works with both fully electric as well as hybrid models. The second shows ‘car autonomy’ information, displaying how many kilometres remain before the battery pack or fuel tank are empty.

The third is a shortcut to the Wear OS My Porsche app which enables users to control their vehicle heating and air conditioning. The last complication shows the total mileage driven. To activate these features, users need to have Porsche ID, Porsche Connect Subscription and the My Porsche app on the watch and phone.

Porsche and TAG Heuer
Although Porsche and TAG Heuer a strategic partnership in February last year, the two companies have been associated various times for over 50 years. Similarities of heritage can be traced all the way back to the entrepreneurs of the companies whose visions changed their chosen fields forever. Edouard Heuer was responsible for the first manufactured chronograph and Ferdinand Porsche constructed a new electric wheel hub motor. Both these accomplishments earned medals at World Fairs held in Paris 11 years apart.

The true cornerstones of today’s partnership, however, are descendants of the brands’ founders. In 1963, the first Heuer Carrera chronograph was introduced, designed to let drivers tell the time at a glance in the heat of action. Jack Heuer, the great-grandson of the founder, was also responsible for the Heuer Monaco, the first square-faced, water-resistant automatic chronograph watch. Its name evoked the Monaco Grand Prix as well as the renowned Monte Carlo Rally which Porsche won in from 1968 to 1970 with its 911 model.

With its sale to the TAG Group, Heuer became TAG Heuer in the mid-1980s. At this time, Porsche and TAG Heuer jointly developed and produced the TAG Turbo Engine that enabled the McLaren team to win three consecutive F1 world titles.

In 1999, the relationship between Porsche and TAG Heuer grew even stronger – from the Porsche Carrera Cup and Supercup competitions, followed by the Endurance World Championship and more was yet to come. Porsche created its own Formula E team with TAG Heuer as title and timing partner in 2019.

Porsche has long distinguished itself in endurance events and together with TAG Heuer, its GT Team has competed in the World Endurance Championship. In addition to physical competitions, TAG Heuer also engages in virtual racing by supporting the Porsche TAG Heuer Esports Supercup. More recently, both companies have partnered in Formula E, the all-electric  single-seater world championship.