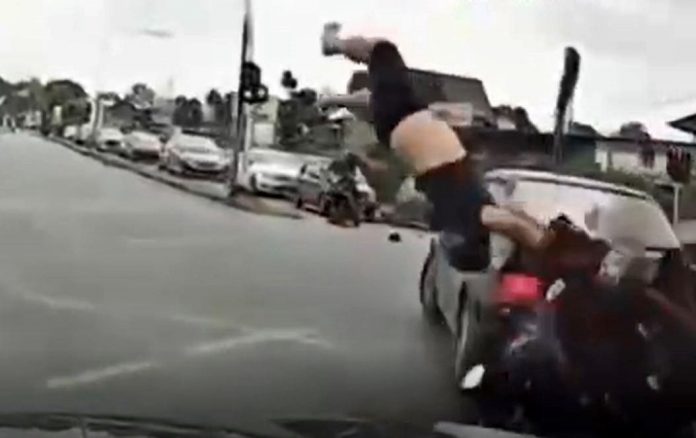 With dashcams now being installed by many motorists, we are seeing a lot of videos of accidents taking place on Malaysian roads. It’s well known that our accident rate is unacceptably high and now we can see reasons why there are some many crashes.

This is one example which is in a video circulating on some Whatsapp groups. It shows a car approaching a cross junction on the left of two lanes. Traffic in this lane should only go straight or turn left (the arrows on the road indicate that); if they want to turn right, they need to be in the right lane. The driver obviously did not think of this or realized he wanted to turn right and without even thinking about the danger of cutting across the other lane to turn, he just did it straight away.

Very unfortunately, a motorcyclist was coming along and at speed, so he could not stop or take evasive action and hit the car. But worse, another motorcyclist also came along and rammed into the rear of the car, the rider being thrown into the air and likely to be injured badly when he hit the ground.

While the motorcyclists might be partly at fault for using the right lane and going straight, the driver is at greater fault for turning right. In fact, he already committed an offence by not following the arrow indications. He should have realized his action was a dangerous one [to others using the right lane] and if he wanted to turn, he should look back and be sure no one was approaching. He obviously did not do that, causing two motorcyclists to be injured.

When we see such accidents, we should learn from the mistakes made so we do not make them as well. In this case, the lesson learnt is that you should always be in the correct lane if you want to turn. If you really must turn from another lane, then you must take maximum care and check for traffic moving along the lane to avoid such an accident. If there is a lot of traffic, it is better to go further down the road and find a way to turn back, which will be safer.