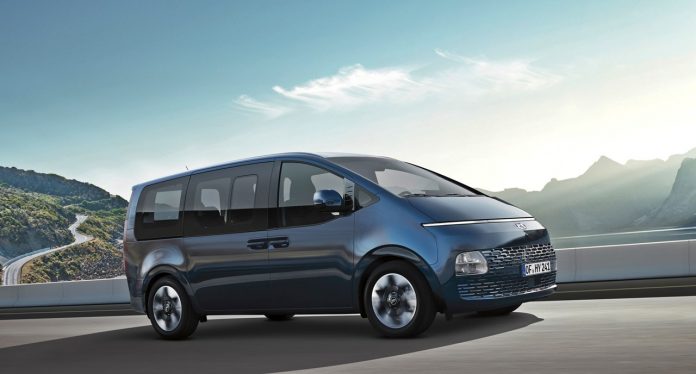 While the Toyota Hiace and its clones from China have long been popular among fleet operators requiring seating for 10 persons or more, there has also been the Hyundai Starex in recent years as an alternative. Now Hyundai-Sime Darby Motors (HSDM) will also offer the Hyundai Staria with a 10-seat configuration.

To go on sale in the fourth quarter of 2022, the large Korean MPV is essentially similar to the Staria 7-seater launched last year. According to Low Yuan Lung, Managing Director of HSDM, there has been the expectation that the 10-seater Staria will also be made available.

MPVs don’t usually qualify as ‘head-turners’ but the Staria does with its futuristic form said to be inspired by a spaceship. The exterior is defined by a single stroke running from front to rear — like the curve of light that illuminates the Earth’s horizon at sunrise when viewed from space.

A bold departure from conventional design, the front end has horizontal daytime running lights (DRLs) and a positioning lamp, both elements running across the width of the vehicle. This is complemented by a bold, wide radiator grille with a unique pattern. The clean silhouette incorporates a pair of low-set headlamps.

Hyundai’s designers have used the same body colour for all frontal parts to maximise the Staria’s modern and pure style. Its rear design emphasises brevity and sleekness, with parametric pixel lamps and a large rear glass area.

Within the spacious cabin measuring around 5 metres in length, there’s generous legroom said to be among the best in its segment. If more cargo space is needed, the seats can be pushed together, thanks to the versatile long sliding seat function. There’s also a full-flat mode at the back for activities that require a lot of room and interior flexibility, such as camping and for equipment-intensive transportation.

The Staria 10-seater has a 2.2-litre CRDi turbodiesel engine similar to that in the 7-seater. This unit produces 177 ps/431 Nm and is mated to an 8-speed automatic transmission operated by a simple electronic shift-by-wire system. The high-efficiency, air-cooled turbocharger enhances low speed performance, with peak torque available from 1,500 rpm.

The Staria 10-seater will be available in three variants, with pricing expected to start from RM17X,XXX, considerably less than the 7-seater Premium version which was RM358,888 (without insurance and with partial sales tax exemption at that time). HSDM also offered a choice of warranty periods with an extra charge for a longer period.

If you are looking for a modern MPV for lots of people, there’s also the new Kia Carnival which seats 11 from Dinamikjaya Motors. Like the Staria, the Carnival is also imported from Korea in CBU form and priced at at RM196,340.80 (without insurance).