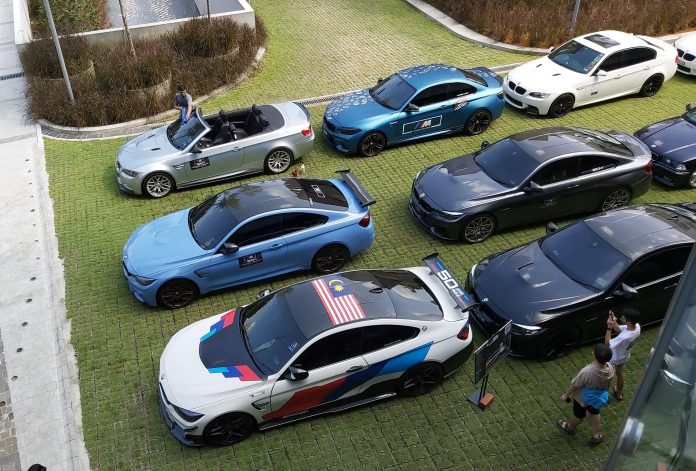 Over 120 BMW M cars travelled in a convoy today to celebrate the 50th anniversary of BMW’s performance brand. The convoy had started from Ingress Auto’s BMW Damansara dealership and made its way to LaLaport Bukit Bintang City Centre where the cars filled Gourmet Walk, the roar of their exhausts reverberating along the ‘canyon’ of buildings.

At the event, one of many around the world celebrating BMW M’s anniversary this year, there were also other activities where cars with the most striking liveries were picked for awards, and the public could also vote for their favourite among all the BMW M cars. There were also music performances and engagements with the public who could win exclusive merchandise.

In conjunction with the anniversary celebrations, BMW Group Malaysia also introduced 6 new models, led by the MY edition of the latest M850i xDrive Coupe. The other 5 models are the new M3 Competition and M4 Competition Sedan and Coupe (both with the M xDrive for the first time), M5 and M5 Competition, and showing BMW M’s electric future, the i4 M50.

“At the BMW Group, M remains the most powerful letter in the world, as it represents our high-performance vehicles born out of pure passion for motorsports. This fascination for power, speed and dynamics has put M on the map since 1972. Fifty years on, we are thrilled to be celebrating the legacy of the BMW Motorsport GmbH with a great community of owners and enthusiasts alike. This milestone is not one we could have achieved without their loyal support throughout these years,” said Mr. de Visser.

The BMW M story
Over the past 50 years, BMW M has given the motoring world many iconic performance cars –  models like the legendary M1, M3, M5 and M635CSi. The M1 was the first-ever official M car, making its debut in 1978. Only 456 units were produced with pure racing technology that continues to be admired to this day.

The M635CSi is one of the most significant models in the history of BMW M. In 1984, the 4-seater continued the concept of high-performance 6-cylinder in-line engines that the M1 had established earlier. But like no other M model before it, it embodied the ultimate symbiosis of luxury and high performance. Dubbing it ‘Sharknose’ and ‘Bayern-Express’, the first ‘Six’ had a production period of over 13 years – from 1976 to 1989 – making it BMW’s longest lasting series.

Although BMW M focused almost exclusively on the construction of performance and racing cars, many BMW enthusiasts were also looking for the BMW M power and badging on road cars. The M5, which premiered in 1985, offered high performance with elegance in its segment.

It was followed by the M3, launched in 1986, which quickly became one of the most iconic BMW M vehicles in the line-up for its numerous championship victories in touring car racing, while also performing impressive on the road.

BMW M has followed market trends and as even enthusiasts came to appreciate SUVs, it developed the X5 M and X6 M, the first M models with 4-wheel drive and turbocharged engines. Today, the BMW X family members with M badges include the X3 M Competition and X4 M Competition.

And now, with electrification underway, the company is also responding accordingly with the debut of its first fully electric model in this anniversary year.  For a company like BMW M, which has built up a reputation producing cars with superlative performance means that the same kind of performance is expected even with electric models. This is promised with new iX M60, which has a powertrain output of 455 kW/619 ps and up to 1,015 Nm of torque. And while it is claimed to be able to go from 0 to 100 km/h in 3.8 seconds, it will also be able to travel up to 566 kms, factory tests have shown.