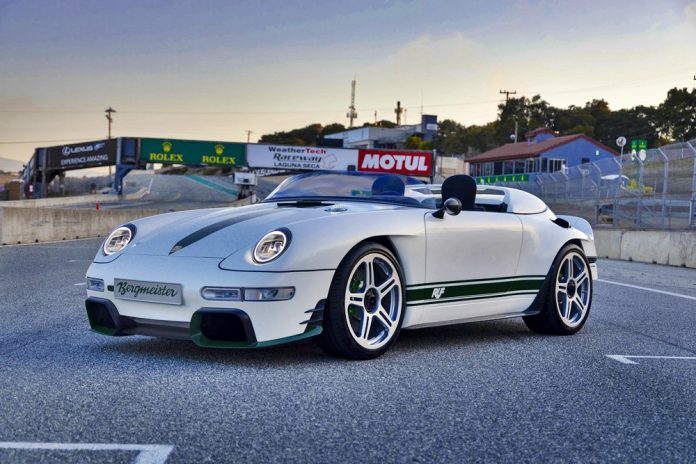 RUF Automobile GmbH, well known for its specialization in Porsches, has come out with a unique model inspired by the legendary Porsche 906. Known as Project RBS, or ‘Bergmeister’, it also has inspiration from the 909 Bergspyder and the 718 RS 60 Spyder hill-climb cars.

The Project RBS is the work of Tony Hatter, a British designer who was with Porsche at one time. Hatter conceived the Bergmeister as an all-carbon skinned roadster which combines the best of classic design and modern engineering in a package ready to master both road and track.

Black Alcantara lines the entire interior and the driver sits in bucket seats, with an Alcantara-clad steering wheel. With its direct steering, the Bergmeister responds to the slightest wheel input and ensures precise handling.

New SCR prototype
At the world debut of the Bergmeister, RUF Automobile also displayed its newly developed SCR prototype which carries much of the same DNA as the 1978 original dressed in a modern package using RUF’s latest technology and engineering. The original SCR was based on the Porsche 911 SC and its engine was improved to deliver similar performance to the 930 Turbo, which cost more.

The iconic SCR build is designed as a state-of-the-art sportscar for those who prefer the soundtrack of a naturally aspirated engine. The consistent lightweight construction and powerful engine result in the feeling of a racing car built for the street. The 4.0-litre flat-six produces 510 bhp/470 Nm, with the power routed to the rear wheels via a 6-speed manual gearbox for an optimal mechanical feel.

“When we began building our own automobiles in 1974, it was all for the thrill of the drive,” said Alois Ruf, owner of RUF Automobile GmbH and son of the founder. “Bergmeister embodies the most elemental driving experience, while the SCR highlights the latest technology offerings from our team in Pfaffenhausen.”

The RUF Story
RUF Automobile’s history goes back to 1939 when Alois Ruf Senior established ‘Auto RUF’, a general automotive and mechanical repair shop. It was located in Pfaffenhasuen, a small village to west of Munich in Germany. The company is still based there though its business has expanded way beyond German borders.

In 1963, the company became associated with BMW as a representative. While the senior continued to expand his company, Alois Junior, both in 1950, began to develop a passion for sportscars. As early as 1975, he built his first car, a 911 Carrera RS 3.0, to his own design. The car attracted much attention with its special interior equipment, headlamp-washer system and roof aerial.

Fast forward to 1983 and the first vehicle to bear a RUF chassis number was the RUF BTR of 1983. The core of this car was a 3.4-litre RUF turbocharged engine with 374 bhp output and a RUF-developed 5-speed manual transmission. The car was hand-built from a bodyshell up. Along with the wide turbo bodywork, RUF also offered the BTR in the narrow 911 Carrera body.

In 1987, the company presented the RUF CTR, a lightweight coupe powered by a 469 bhp 3.4-litre twin-turbo engine and Motronic engine management in a narrow, aerodynamically-optimized body. The performance of the CTR, which the international motoring press dubbed the ‘Yellowbird’, set new benchmarks for street-legal sportscars.

In comparison tests on the high-speed track at Nardo in southern Italy the CTR, with its top speed of 343 km/h beating pedigree high-end sportscars like the Ferrari F40, an AMG-Mercedes and a works-tuned Porsche 959. In that same year, the US Environmental Protection Agency (EPA) and Department of Transportation (DOT) certified RUF as an automobile manufacturer.

To this day. RUF remains unique as a manufacturer in its own right and continues to source ‘bodies-in-white’ directly from Porsche to produce bespoke hand-built sportscars with their own very special characteristics. Every car is built specifically to the owner’s requirements which means that each car is very rarely the same as any other produced at the factory and carries its own RUF chassis number.