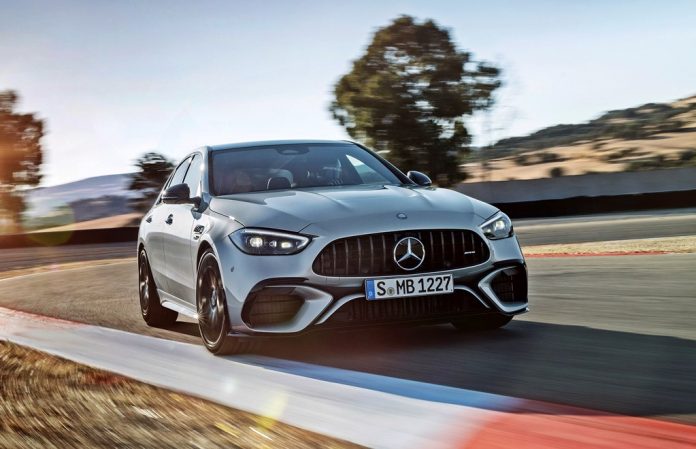 The V8 that has always been the engine most associated with the high-performance brand. It was a 6.8-litre V8 in the AMG 300 SEL, nicknamed ‘The Red Pig’, that powered AMG to fame at the 1971 24 Hours of Spa.

Up till now, the top-selling C63 S has had V8 power with the current version developing up to 503 bhp from its 4-litre engine. But the V8 tradition looks like it’s coming to an end with the new C63 S E Performance that has what some might see as a ‘lowly 4-cylinder powerplant’. And to add to the despair of enthusiasts, the powertrain in this new C 63 S is a plug-in hybrid unit.

Of course, Mercedes-AMG has not been indifferent to 4-cylinder engines – in fact, they have even developed and made the world’s most powerful 4-cylinder engine (the M139) which is in the A45S AMG, among other models.

F1 hybrid technology
Having built up such a strong reputation for high performance, it is only to be expected that Mercedes-AMG is not going to allow electrification to erase that. And not surprisingly, it has drawn on the one area that few other high-performance manufacturers have direct access to: the hybrid technology used in the Mercedes-AMG PETRONAS Formula 1 racing cars since 2014.

In fact, Mercedes-AMG had actually made history a bit earlier than 2014 at the 2009 Hungarian Grand Prix. Back then, using the Kinetic Energy Recovery System (KERS) was optional and the opening races were won by cars with conventional engines. However, Mercedes-AMG had developed a hybrid system run by McLaren-Mercedes in 2009 so when Lewis Hamilton won the event that year, it was the first ever victory for a hybrid F1 racing car.

Electrically-assisted turbocharger
The technologies used in the combustion engine include an electrically-assisted exhaust gas turbocharger which is integrated rather than a separate element. A powerful but very slim electric motor is slotted between the turbocharger’s inlet and exhaust turbines, providing extra boost at low speeds when the exhaust gases have lower pressure. At higher speeds, the motor shuts down as the gases rushing through can spin it up to at least 150,000 rpm.

In the old days, turbochargers were big and had the dreaded ‘turbo lag’. One solution was to make them smaller so the turbines could spin up faster. Now, with the electric drive assisting, it is possible to have a significantly larger turbine which forces in large volumes of the air and fuel mixture.

That’s the 2-litre combustion engine alone and then there’s the electric motor at the rear axle, where it is integrated with an electrically shifted 2-speed gearbox and the electronically-controlled limited-slip rear differential in a compact electric drive unit.

Drawing power from the high-performance 6.1 kWh battery, the motor can generate continuous output of 70 kW and a peak output of 150 kW for 10 seconds. A fully-charged battery can power the C63 S for up to 13 kms on electricity alone.

Over 1,000 Nm of torque
With its combined power generators, the hybrid system can provide up to 500 kW (680 bhp), with the maximum torque going up to 1,020 Nm. That can take the C63 S from 0 to 100 km/h in a claimed 3.4 seconds, with the acceleration ending at 280 km/h (with the AMG Driver’s Package) which is an electronically-set speed limit. So rest assured that even with 4 pistons less and a lot less displacement, this new model still delivers AMG performance.

The basic operating strategy is derived from the hybrid powerpack of the F1 racing cars where  maximum propulsion is always available. How much power goes to the four wheels through the AMG Performance 4MATIC+ drivetrain can be chosen by selecting one of eight AMG DYNAMIC SELECT programs.

These drive programs – Sport, Sport+, RACE, Slippery, Electric, Comfort, Battery Hold, and Individual – adjust important parameters such as the response of the drive system and transmission, the steering characteristics, the suspension damping or the sound.

One example of how the variable power distribution works is when in Electric mode, for instance, the combustion engine is not used until 125 km/h. Comfort mode has the car starting off in electric mode but then switches to hybrid at higher speeds. However, when both electric motor and engine are working together, the rear electric motor is limited to 25% boost.

The hybrid drive also benefits dynamic handling control. Instead of braking intervention by ESP, the electric motor can also control traction as soon as a wheel slips too much. To do this, the intelligent control system reduces the drive torque of the electric motor that is transferred to the wheel via the LSD. The ESP therefore does not have to intervene at all, or only later.

The advantage here is that the combustion engine can be operated with higher torque, which both improves agility afterwards and increases efficiency. In addition, the power otherwise wasted during braking can be used to charge the battery.

‘Advanced sound experience’
For those who miss the throaty growl an AMG engine, the C 63 S does offer something that can  provide the aural experience, albeit artificially. The ‘advanced sound experience’ is from a recording of the actual sound of the combustion engine via a pressure sensor in the exhaust system, enriched further before being generated in the cabin via the infotainment system.

When driving on just electric power, the car will be fairly quiet and this has been recognised as being dangerous to pedestrians. So there are now laws in some regions which require some sort of sound to be generated and for the C 63 S, there is an Acoustic Vehicle Alerting System. This generates a specially composed, low-frequency and speed-modulated AMG sound outside the car via a loudspeaker at the front and a soundbar with two loudspeakers at the rear. It is active up to 20 km/h (30 km/h for US market models).

The standard rear axle steering operates with a maximum steering angle of 2.5 degrees. Up to this point, the rear wheels turn in the opposite direction to the front wheels at speeds of up to 100 km/h. This leads to a virtual shortening of the wheelbase which, in turn, results in significantly more agile turn-in, less steering effort and improved manoeuvrability.

At speeds above 100 km/h, the rear wheels turn in parallel to the front wheels – up to a maximum of 0.7 degrees. This virtual extension of the wheelbase has a positive effect on driving stability, leads to a faster build-up of lateral force when changing direction and thus to a more direct reaction of the vehicle to steering commands.

New AMG Performance seats available
The interior of the C 63 S has the typical AMG sporty environment with special upholstery and the option of installing a completely redesigned second-generation AMG Performance seat instead of the standard AMG sports seats. Its special feature is the seat side bolsters with weight-saving openings that also allow better ventilation.

The MBUX infotainment system is in virtually every Mercedes-Benz and Mercedes-AMG these days. Mercedes-AMG customises the system for its models and for the new C63 S, there are also hybrid-specific displays and functions. These include special displays in the instrument panel, on the central display and on the head-up display. The appearance of the instrument cluster can be personalised with different display styles , with an AMG-specific Supersport style arranging presenting a vertical menu structure.

Two bodystyles
To be offered in sedan and stationwagon bodystyles, the C 63 styling differs from that of the latest C-Class with its more muscular proportions and dimensional increases. The front end is 50 mm and the front wings are wider, with an extra 83 mm in overall length with 10 mm added to the wheelbase.

Exclusive to the C 63 S is the slim air outlet in the centre of the bonnet that transitions elegantly into the two powerdomes. Flics, large inlets and air curtains direct the airflow specifically to its various functions. Two electronically controlled AIR PANELS (behind the radiator grille and in the front apron) allow the air to be regulated as required.

For the first time on a Mercedes-AMG production model, instead of the Mercedes star with laurel wreath, there is a round badge with a black AMG emblem on the bonnet. Further typical elements include the AMG-specific radiator grille with vertical struts and the AMG front apron in jet-wing design.

Exclusive details at the rear include the special airflow breakaway edge on the bootlid (roof spoiler on the Estate), the plug-in charging flap and the model designation set against a red background.