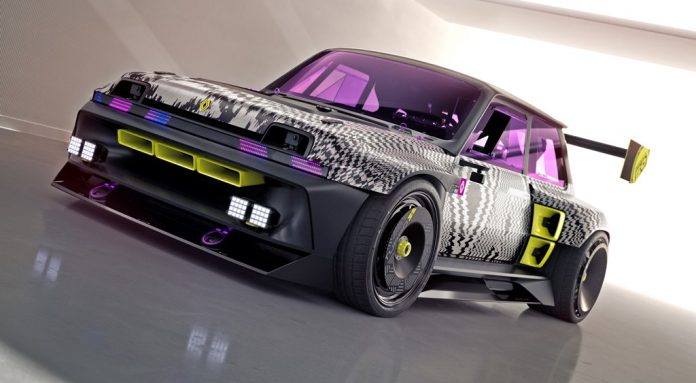 The Renault 5 might never have been born as it never started as an official project of the company. It was an idea which a designer worked on during his own free time and when top management saw it, they were impressed with its concept and wanted it put into production.

Though starting life as a humble little car, the Renault 5 would become an icon today and on the 50th anniversary of the model, Renault has created the R5 TURBO 3E as an all-electric showcar which pays tribute to the most celebrated sports versions: the Renault 5 Turbo and Turbo 2. It has logically been named R5 TURBO 3E, ‘3’ because it follows the Turbo 2, with ‘E’ being for electric.

This reinterpretation of the Renault 5 Turbo 2 is deliberately exuberant, and a perfect blend of ‘the automobile of the future and fashion’. Alongside the Renault 5 Prototype, it marks an ‘electric rebirth’ for the brand as a prelude to the company’s all-electric future in Europe by 2030.

Like its iconic predecessor, it is strictly a two-seater. However, it no longer pollutes the air as the rear-mounted powertrain consists of two electric motors, each moving one of the wheels, with the batteries in the middle under the floor. The total output is 280 kW (380 bhp), with 700 Nm of instantly available torque.

Renault says it can zip to 100 km/h from standstill within 3.5 seconds and reach a top speed of 200 km/h. Built on a tubular chassis, protected by a flat base and shielded by roll bars, the R5 Turbo 2 has been set up to be a pure drifter.

Its 42 kWh battery has plenty of capacity for several laps or an intense gymkhana. For these situations, it has a 50-plus steering angle so it’s easier to dodge obstacles.

To facilitate the recording of the car’s action inside and out, there are around 10 mounting brackets for cameras around the car. These include locations at the headlights and exterior mirrors, from which thrilling footage of the drifting can be captured.

Inspired by videogame universe
“A work of art with exaggerated lines, inspired by the videogame universe, with hints at the Renault 5 and Renault 5 Turbo inside as much as out.” This was the brief handed to the teams working with Sandeep Bhambra, Chief Designer for Renault concept cars, for the R5 TURBO 3E show car.

To start off, they looked at the original model and decided to adopt the same shape for the bonnet, doors and cockpit – with the bodyshell made of carbonfibre. It also has a fresh take on the Turbo 2’s iconic air inlets on the rear fenders.

The large air inlets on the front bumper cool the engine and add downforce. The three vertical sections are instantly reminiscent of the Renault 5 Turbo 2’s bumper. The square fog lights look a lot like the ones ‘back in the day’, but now there are four and each contains 16 LEDs. There are also pink, blue and yellow LED strips at the front and rear, which flash when the car drifts, adding a 1980s and 1990s videogame vibe. Retro videogames also provided the inspiration for the camouflage stickers adorning the bodywork.

The show-car measures 2.02 metres in width with a 4-metres length and 1.32 metre height. Like the Group B rallycars of the 1980s, it has a huge rear spoiler which helps press the rear end to the ground as the car slides around the course.

Inside the R5 TURBO 3E, the mood is a present-day and cheerful combination of hallmarks from motorsports and videogames. The carbonfibre racing bucket seats, safety harness and steering wheel are the result of teamwork with Sabelt. An imposing upright handbrake lever – a drifter car mainstay – in the middle of the centre console that is eminently ‘pop’ yellow.

The same yellow intertwines with pink to add sparkle to the grey and black tartan – a tip of the hat to the 1980s – on the seats and dashboard. The tartan in turn produces a visual effect based on the Renault logo. There is also a logo – which lights up this time – on the steering wheel hub. All these colourful touches also contrast with the black cork floor and Alcantara lining the top of the dashboard and the door panels.

In a modern twist on one of the Renault 5 Turbo 2’s instantly recognisable features, the 10 analogue dials facing the driver have been replaced by 10 digital screens on the R5 TURBO 3E’s dashboard. They work like widgets (looking a lot like Pixel Art and Glitch Art), and seem to have leapt out of the retro gaming universe.

“R5 TURBO 3E combines ultra-tech design and wilful exuberance with numerous references to the world of car racing and video games. This combination propels the show car into modernity and technology, and it is at the frontier between the real and virtual realms. This pure electric ‘drifter’ demonstrates that electric cars can also be fun with incredible performance!” said Renault Design Director, Gilles Vidal.