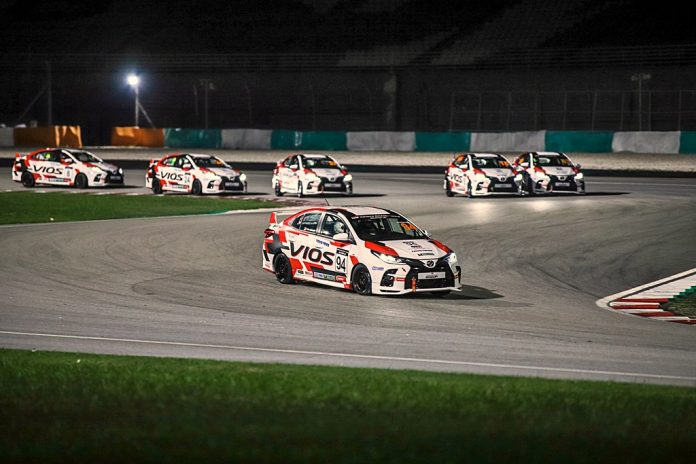 An intensely-contested race for the finale of Season 5 of the Vios Challenge, part of the TOYOTA GAZOO Racing Festival (TGR Festival) was expected and that was precisely what took place at the Sepang International Circuit. In the final showdown, the overall championship title in all four classes of racing would be decided in the very final 20-lap race

The fierce competition was understandable as the Vios Challenge, a series now well established in Malaysian motorsport, is the most lucrative motorsports event in the country. More than a half a million ringgit in prize money is offered and the overall champions of the Super Sporting and Sporting Classes this year would take home RM70,000 and RM50,000, respectively.

As in previous seasons, the weekend’s race (as well as activities) were streamed live and according to UMW Toyota Motor, a record-high 3.1 million online viewers and race fans tuned in to watch.

“We’ve come a long way in five seasons of the TOYOTA GAZOO Racing Festival and the Vios Challenge race series since it was started in 2017. At the time of inception, we wanted to change the thinking that Toyota cars are meant for the matured crowd. We wanted to build an ever better car that also makes it attractive for the younger buyers and today, there has been a total shift,” said  UMW Toyota Motor President. Ravindran K.

“Of course, we also wanted to make a significant contribution to Malaysian motorsports,” he added, ”and the Vios Challenge provides us with a very strong platform to evaluate and develop our future cars. We also want our young engineers to be able to contribute to the research and development of future models. We want our customers to enjoy a very safe, fun and powerful car to drive, in this case, the Vios. The Vios Challenge is the right platform for people to see this and for a lot of young engineers to join us to build better cars for the future.”

The results, however, made little difference as to who would be crowned the overall Super Sporting champion in Season 5 – Axle Sports’ Hayden Haikal. “It feels just like 2020 when I won the Sporting Class. I couldn’t be happier. Going into Race 2, I felt that my car was slower than it was in Race 1 due to the weight penalty and I came under tremendous pressure from the field. The last two laps were the happiest of my life when two drivers had some problems with their cars and that allowed me to pass moving me up to fourth position with just enough points to stay ahead in the championship,” said the 18-year-old newly crowned champion.

Victory in the Rookie Class meanwhile, went to Muizzuddin Musyafa, with Sharique Zulqarnain and Nabil Azlan rounding up the top three. Third place, however, was enough to crown Nabil with overall Rookie Class champion. Incidentally, Nabil is the brother of Naquib Azlan, who was the champion rookie in Season 4. Both brothers, skilled sim racers, are graduates of GAZOO Racing’s Young Driver Development Program which trained the rookie racers.

“First of all, here’s a massive shout out and thanks to Toyota and giving all of the rookies this opportunity to transition from simulator racing to saloon car racing. It wasn’t an easy task but thankfully, everything went well for me. I learnt from the mistakes I made and that led to three race victories and four podium finishes in six races. I hope to continue racing next year,” said Nabil.

In the Sporting Class, brother Naquib Azlan drove to a dominant Race 2 win – his second straight win over the weekend – to clinch the overall championship title with an unassailable lead in the point standings. Finishing second in the heatedly contested race was Carroof Motorsport’s Mirza Syahmi Mahzan who crossed the finish line just 0.4 seconds adrift, followed by Tom Goh of S&D Tama Motorsports in third place.

“Coming into this race and starting from sixth position, it was never going to be straight forward. Also, with the overall championship in mind, I really had to manage the risks that I took. I did not want to get into any incidents that could cost us the championship title,” said Naquib who drove for Axle Sports.

“With 60 kgs of ballast, it was difficult to keep up with the faster cars and I had to be more imaginative to make the overtaking manoeuvres stick. At towards the final laps of the race, I saw an opening and I just went for it,” he explained.

“I’ll try to find a way to make that happen. I want to win that as well. I never expected my transition to the Sporting Class to be so successful, especially with more experienced drivers. To be honest, I was never certain I could win a race what more the overall championship,” he said.

The Promotional Class saw singer Khai Bahar racing to his first race win of the season, just ahead of Ahirine Ahirudin with presenter Nabil Ahmad in third position. That third position was enough to earn Nabil the overall Promotional Class title with a 6-point advantage over actor Zizan Razak who again finished runner-up in his second successive season.

Season 5’s finale was held as a special and exclusive event opened to only 2,000 race fans and celebrity superfans over the race weekend. The entire rooftop of the circuit’s main paddock building was transformed into a festival ground, with numerous activities for all the family.

The TGR Festival was also celebrated with live concerts on both days. The TGR racing celebrities presented their own performance while there was also a special 40-minute Rappers & Racers concert anchored by K-Clique. Additionally, the Rockers & Racers concert featured Malaysian rock queen Ella and girl group Dolla.