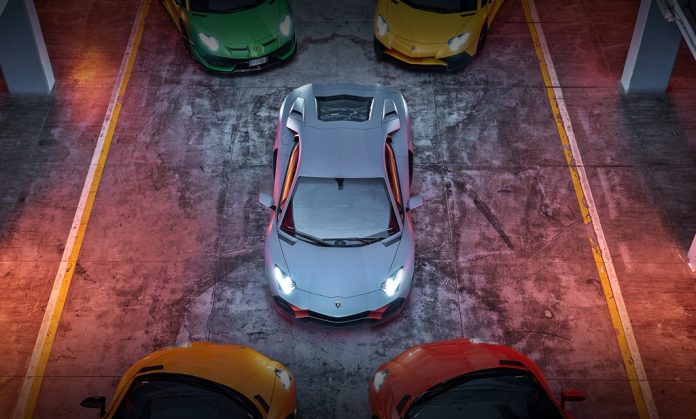 A light blue Aventador LP 780-4 Ultimae Roadster was the last pure, naturally-aspirated V12 Lamborghini to be produced, bringing an era to the end. Lamborghini has sold more Aventadors than the sum of all its previous V12 models, delivering its 10,000th Aventador in September 2020.

Unveiled at Geneva Motor Show in 2011 as the Aventador LP 700-4, the Aventador was a game-changer at its launch, and stood as the flagship model of the sportscar maker for 11 years of production.

“The Aventador is a jump of two generations in terms of design and technology, with an exceptional package of unique, innovative technologies and performance that is simply overwhelming,” said Stephan Winkelmann, Chairman & CEO of Automobili Lamborghini at the time of its launch.

The benchmarking characteristics described at its debut have endured throughout its life. It has originated over 10 one-off and limited editions; set track records; won numerous awards; been the subject of artistic projects; featured in films and videogames; and delighted owners, enthusiasts, children and media the world over.

The Aventador’s technical innovation at its heart began with a ‘clean sheet’ approach. The first of its kind in a production car, a lightweight carbonfibre single-piece monocoque weighing just 147.5 kgs  was produced using Lamborghini’s patented RTM-Lambo process, manufactured entirely in-house. It delivered maximum torsional stiffness, and safety for the car’s occupants.

Automobili Lamborghini’s expertise in carbonfibre and lightweight technologies is represented throughout the Aventador’s evolution, including extensive developments in forged composite technologies. A team of ‘flying doctors was established at the Aventador’s inception, travelling across the world to support dealers with specialist diagnostics and repairs to the carbonfibre monocoque when damaged.

The design, created in-house by Centro Stile, was that of an aeronautically-inspired, dynamic, sculpted super sportscar. Its taut lines, complex surfaces and juxtaposition of angles and surfaces, including the scissors doors reserved for V12 Lamborghinis. Not only was it a timeless automotive design but more importantly, a powerful piece of enduring automotive art.

The then-new Lamborghini V12 60˚powerplant, developed entirely in-house, a continuation of the V12 heritage since the company’s earliest days. The launch car had a 6.5 litre engine that produced up to 700 bhp at 8,250 rpm and 690 Nm of torque, rocketing the Aventador from standstill to 100 km/h in 2.9 seconds and on to a  top speed of 350 km/h.

A robotized, Independent Shifting Rod (ISR) single-shift transmission, chosen for its lightweight compactness and the most emotive shift feel, was unique in a roadgoing car. It could change gears in just 50 milliseconds.

A pushrod suspension system inspired by Formula 1 was implemented in the Aventador, with a central ECU controlling electronic systems as well as the car’s set-up in terms of engine, transmission, differential, stability and steering via the unique drive mode selection system.

“The Aventador captured Lamborghini’s competencies in design and engineering when it debuted, with Lamborghini values that are always at the centre of company and product impetus: pure, futuristic design; benchmarking performance; and addressing technical challenges with innovation to produce the most emotive, class-leading super sportscars. These principles are the very essence of the Lamborghini Aventador, and assure its timeless appeal,” said Winkelmann.