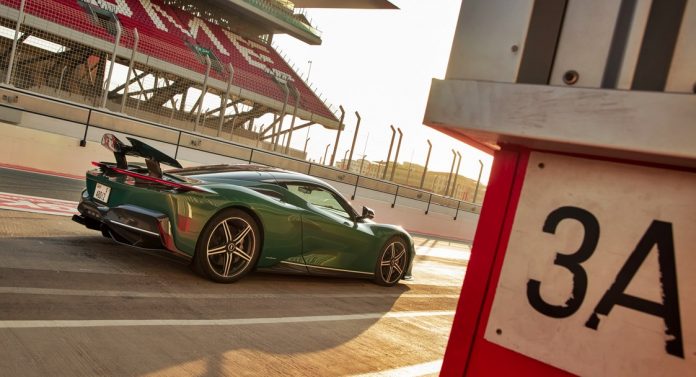 The switch to electric powertrains has seen a sudden leap in the power and torque available to propel cars. Unlike internal combustion engines, electric motors generate power in an entirely different way, with a huge amount of peak torque available from almost standstill.

So impressive new performance numbers are beginning to appear and new records are being set by this new generation of cars. Every month, some company will announce a sub-5-second time and sometimes it is recognised as a world record as well.

The confirmed times (set at the Nardo course in Italy) were announced at the debut of the hypercar in the Middle East which took place on the track at the Dubai Autodrome in the United Arab Emirates. Additionally, the company also claimed it to be the fastest braking electric car in the world, decelerating from 100 km/h to standstill in 31 metres.

The Battista has a 120 kWh battery pack which provides power to the four electric motors – one at each wheel – and has a claimed maximum range of 476 kms, with a maximum speed said to be 350 km/h.

“I am proud that our new electric hyper GT delivers on the promises we made when we set out or development plan. In Battista, we have achieved performance beyond our original, extreme targets,” said Paolo Dellacha, the company’s Chief Product and Engineering Officer.

“Perfectly optimized weight distribution and low centre of gravity are at the heart of this result. The combination of bespoke chassis and suspension tuning, tyres proven over many thousands of test miles and 4-motor torque vectoring delivering unprecedented power enables Battista to be the fastest accelerating road-legal car in the world,” he said.

The Battista also features a unique soundscape, SUONO PURO, that complements the driving experience. The soundscape can be personalised via one of five driving modes – Pura, Calma, Energica, Furiosa and Carattere.

Only 150 units will be built by Automobili Pininfarina, which is related to the original Pininfarina that designed cars for Ferrari, Peugeot, Lancia and many other carmakers in past decades. Each Battista is ex-factory priced from €2.2 million (around RM10.33 million) although customers are likely to pay more with the additional personalisation that will be required.