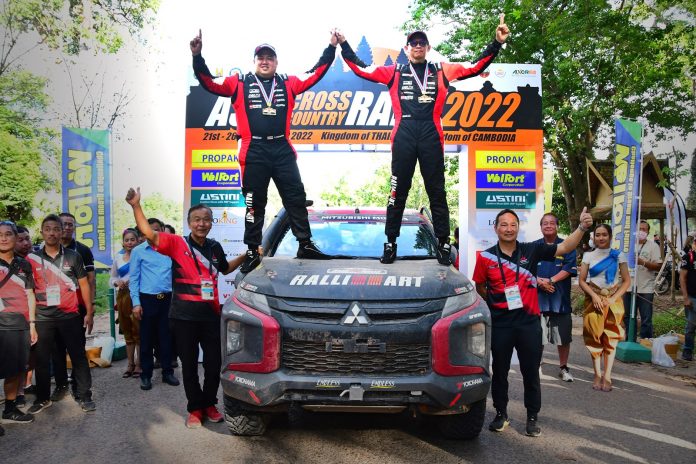 After not being run for 3 years due to the COVID-19 pandemic, the Asia Cross Country Rally (AXCR) 2022 returned this month. The tough event held in the northeastern part of Thailand and in Cambodia saw Team Mitsubishi Ralliart taking overall first place after 6 days of competition over 1,200 kms.

The event saw the participation of a total of 56 machines – 21 in the motorcycle category, 2 in the sidecar category, 32 in the car category, and 1 in the truck. Legs 1 to 3 were run over courses in the area around Buriram, while Leg 4 brought the participant to the border between Thailand and Cambodian. For Leg 5, the participants crossed into Cambodia to race to finish line near the World Heritage site of Angkor Wat.

The first half of the rally consisted mainly of high-speed stages on rough, dry unpaved roads, while the second half was more challenging with large, deep puddles scattered on muddy roads caused by heavy rain, and a tougher course compared to the earlier stages.

Due to one of the Team Mitsubishi Ralliart drivers (Sakchai Hantrakul) being infected with COVID-19 and having to retire right away, the team had to continue the rally with two Tritons driven by Chayapon Yotha and Rifat Sungkar. Even from the early stages, the Triton of Chayapon was already taking the lead.

Despite suffering from a flat tyre in SS2 on the second day of the competition, Rifat Sungkar had steadily moved up from 8th to 4th overall position, prioritized focusing on a solid finish to the final day rather than aiming for the fastest time.

The final stage was the most demanding as it had rough dirt roads with large holes and deep ruts, and muddy roads that were difficult to escape from if stuck. Some drivers were unable to extract their vehicles fast enough and failed to finish within the 2-hour time limit.

With his comfortable lead, Chayapon drove his Triton calmly and made sure that there were no mistakes or damage. With a total time of 8:22:42, he took overall victory in the Asia Cross Country Rally 2022 which was his first attempt. Rifat Sungkar finished in fifth position, 17 minutes and 14 seconds behind the winner.

Throughout the event, the drivers had the guidance of off-road veteran, Hiroshi Masuoka, who was the director of Team Mitsubishi Ralliart. He had been participating in the Dakar Rally since 1987 and won it in 2002 and 2003 with the Mitsubishi Ralliart team.

“For this year’s AXCR, we built on the high reliability and durability of the Triton by tuning the engine and chassis, and entered the rally with specifications relatively close to the production vehicle. Even so, the two Tritons delivered powerful driving, and I am very proud of our high finish,” said Masuoka.

He commended the drivers and team for their efforts, and also appreciated the extensive know-how which Mitsubishi Motors has accumulated over the years. “We would like to feed the knowledge we gained through our participation in the AXCR back into the development of production vehicles, and build Mitsubishi vehicles that are even tougher, more powerful, and more reliable,” he said.

Visit www.mitsubishi-motors.com.my to know more about the Mitsubishi Triton and where you can test one in Malaysia.