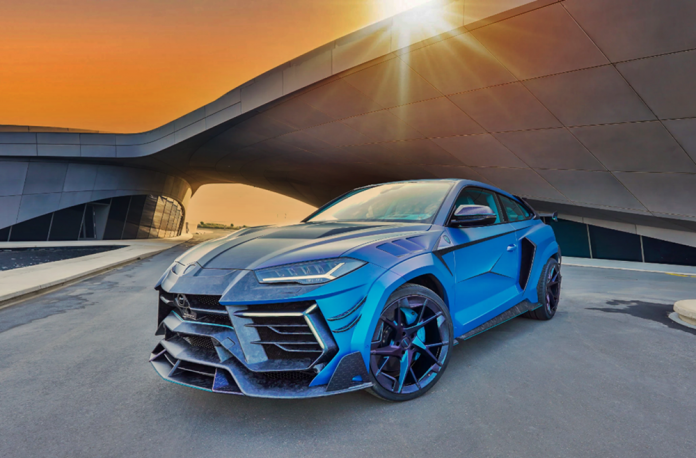 The Lamborghini Urus super SUV has been a success for the sportscar maker right from the time it went on sale in 2018. Within the first four years, 20,000 units were sold, making it the company’s best-selling model in the shortest time ever. Last year, of the 9,322 vehicles Lamborghini delivered worldwide, 5,367 of them were the Urus.

For most people, owning an Urus (which presently has an 18-month waiting list) is already something special. But there will be some who still want their luxury SUV to be more unique and are willing to pay the extra money for personalisation.

MANSORY, the specialist customisation company in Germany, has been offering complete conversions of the Urus which is one of the more popular models it works on. Now it has embarked on a project to produce a very special Urus which has 2 doors instead of the four in the production model. Not only will this model – called the VENATUS Coupe EVO C – be uniquely different but only 8 units will be available for purchase.

The basic idea for such a conversion was suggested to MANSORY by its customers several times before when discussing the MANSORY Bespoke conversion program. It was an enticing idea and having received the same suggestion from different customers, MANSORY began extensive planning over a year and a half before deciding to go ahead.

The starting point for the conversion was the Venatus EVO S, based on the Urus and already available from MANSORY. This has an upgraded engine tuned to produce 900 bhp/1,100 Nm so the powertrain side was already fully developed.

In order to convert the base model from a 4-door bodyshell to a 2-door configuration, extensive body modifications have to be made. As a first step, the standard Urus body is stripped of all 4 doors. The B-pillar is then moved backwards by 200 mm in order to provide sufficient space for the front doors, which have grown to the same length.

In order to adapt the design of the Venatus Coupe EVO C to the existing design elements of the Venatus EVO S as harmoniously as possible, the 2-door body has been significantly widened in the area of the side panels. Massive side air intakes have also been added in front of the rear wheels. There is a modified high-performance exhaust system with a new layout of the 3 exhaust tailpipes, providing differentiation from the base model.

The corresponding new body side panels to be fitted were also completely redesigned and newly welded into the existing body structure of the car. The design of the doors will also be adapted and given a completely new design language by using an arrow-shaped 3D shape. To round off the side view in its entirety, MANSORY installs an additional side air duct made of full carbonfibre in the entire area of the C-pillar.

The YN.5D rims which made their debut on the Venatus EVO S are also fitted to the Venatus Coupe EVO C, with the same sizes of rims (10 x 24 inches in front, 12.5 x 24 inches at the rear) as well as tyres.

As with all MANSORY complete conversions, customers will have total freedom in the appointments and choose whatever colour, quilting and materials they want. As standard, the SUV comes with seatbelts with the MANSORY logo, MANSORY sports aluminium pedals, MANSORY leather floor mats, specially designed ambient light in the headliner, and also a start button relocated to the headliner.

As the removal of two doors creates a new requirement for entry to the rear seats,  the front seats are extended by a folding mechanism. The rear seating area does not have individual seats but is fitted with an individually configurable centre console.

“We are very proud of the quality and the perfect craftsmanship of our modifications in many respects. The Venatus Coupe EVO C not only sets new standards in terms of its design, but with the transformation of a standard 4-door vehicle into a 2-door coupe, we can once again impressively demonstrate our high level of competence in the field of body construction,” said Kourosh Mansory, CEO and founder of MANSORY Design und Holding GmbH, adding that there will be another model coming soon which will be ‘no less spectacular conversion in this style’.