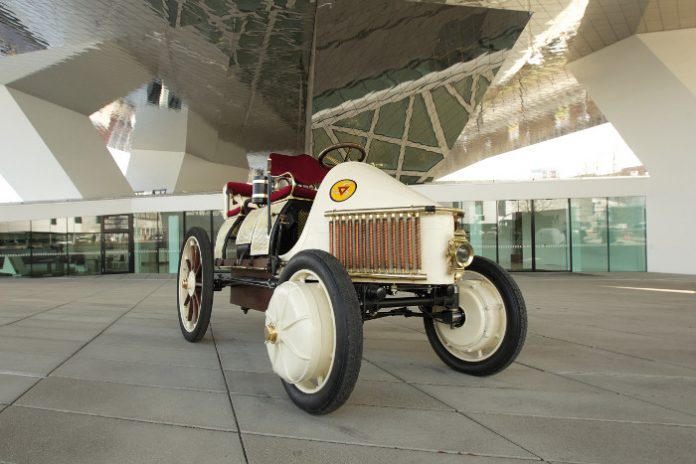 If you are a Porsche fan and have a thirst to know everything you can about the brand, then this is your lucky day. The German automaker has decided to share 36 facts you didn’t know about the company, the 919 hybrid and its achievements at Le Mans.

Some of them are really interested such as what the 919 Hybrid has in common with the power supply of a village, How many times has the company won Le Mans and how many hollywood actors participated in Le Mans with a Porsche race car.

Here are the 36 facts as described by Porsche:

1 The initial roll-out of the first 919 was done by Porsche works driver Timo Bernhard on June 12 in 2013 at the Weissach test track. A little over two years later, he became world endurance champion with the further developed Le Mans prototype.

3 Hollywood stars entered Le Mans with Porsche. Steve McQueen’s attempt made it in to the cinema in 1971, Paul Newman came overall second in 1979 while Patrick Dempsey also climbed the 2015 podium, finishing second in the GTE-AM class.

3.2 hours is the average time each of the Porsche LMP drivers spend on a massage bed during the 24-hour race.

4 Porsche LMP team members were the small delegation visiting Le Mans in 2013 for research purposes one year before the return to the top category. They witnessed the first win of a works Porsche since 1998 when the 911 RSR won the GT class.

5 people were on board at the end of 2011 when Porsche, under the guidance of Fritz Enzinger, began to prepare for the LMP return. Since 2015 the team’s head count is 260 with 160 of them being engineers.

6 Porsche LMP drivers in three bedrooms: two drivers each share a container behind the pit box to rest and sleep. A shared bathroom is included. Quietness is not an option.

8 megajoules from energy recovery systems per lap in Le Mans is the highest category from the efficiency regulations. Porsche was the first – and for a long time – only manufacturer in that category. The trendsetting challenge behind this: the more electrical power the 919 uses, the less fuel it is allowed to burn.

12 men were the advance guard that began on 23rd May 2017, almost four weeks before the race, to build up the two-floor steel hall behind the Porsche LMP pit box. On May 30, a convoy of eight semi-trailers arrived containing the race cars and the entire equipment. For the test day on June 4, everything has to be in place.

15 minutes before the 919’s maiden race, at Silverstone in 2014, Team Principal Andreas Seidl spun his tension into a funny quote: “That’s one small step for mankind, but one giant leap for Porsche – we’ve got two LMP1 cars on the grid!”

19.9 kilograms is the weight of a rim with tyre. Mechanic Rainer Mühlhäuser manages to pick up a used wheel and attach a new one by using only one hand respectively. Since he did that at the opening WEC race in Silverstone, others down the pit lane are practicing this truly impressive feat.

20 hours in to the race when car number 20 took the lead in 2014. 20 minutes after Mark Webber had begun his final stint, he brought home this number 20 car on electric drive – engine failure. 20 minutes later the number 14 sister car suffered a gearbox failure.

20:32 was the time in complete darkness on December 9 in 2013 when Mark Webber started his first ever lap at the wheel of an LMP1 car on a circuit he had never driven on. This Portimão test was a turning point: The 919 Hybrid’s initial V4 engine had caused heavy vibrations. By December, the problem was solved. 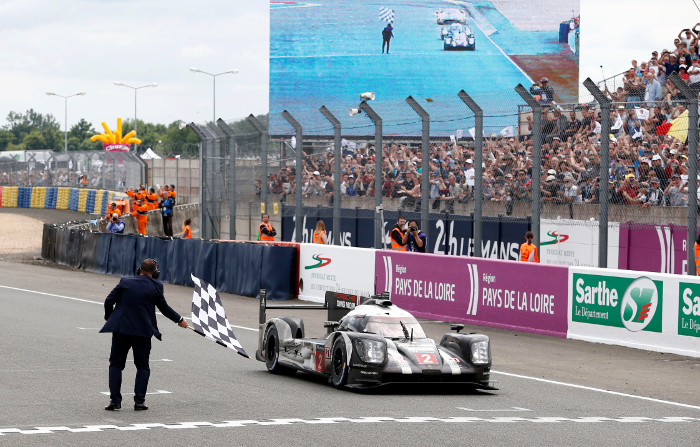 25 On October 10 in 2014, practice day in Fuji, the team congratulated Brendon Hartley for his 25th birthday – including presents. Unfortunately, it was one month early.

30 stops for refuelling and ten stops for changing tyres and drivers is anticipated for each Porsche 919 Hybrid during the Le Mans race.

54 consecutive laps Romain Dumas as well as Neel Jani were at the wheel of the winning car at night during the 2016 Le Mans. Due to safety car periods, Dumas’ stint was exaggerated to the longest stint of all the Porsche LMP drivers. It lasted from 00:13 hrs until 03:38 hrs. That’s almost the duration of two Formula 1 Grands Prix.

60/40 Around 60 per cent of the 919 Hybrid’s recovered energy comes from the front brakes, around 40 per cent is provided by the exhaust system.

65 people form the Porsche LMP Team’s operational crew at a six-hour race. At the Le Mans 24-Hours this number is 90.

90 degree is the cylinder angle of the 919 Hybrid’s V4 combustion engine. But its operating mode is one of a steep standing “boxer” engine.

100% At the 2015 final WEC round in Bahrain, both throttle barrel levers broke on the Timo Bernhard/Brendon Hartley/Mark Webber car. The fact that the three drivers still reached the chequered flag and became world champions was thanks to a mechanic’s clever idea and quick thinking engineers: mechanics had locked the barrels on full throttle – by putting two pliers into the engine, fixed with cable straps – while engineers were busy programming in real time to keep the car running.

239 On November 30 2014, Mark Webber was on lap 239 at the season’s finale in São Paulo when he suffered the worst crash of his entire career.

248 After 248 laps in São Paulo, Neel Jani in the sister car, scored the first race win of the Porsche 919 Hybrid.

395 laps were covered by Earl Bamber/Nico Hülkenberg/Nick Tandy on their way to win the 2015 Le Mans 24-Hours. The three LMP rookies agreed before the race that they each drive the speed they were comfortable while trying to avoid hitting anything. This way a podium finish should be doable. The plan resulted in the first overall victory for Porsche since 1998.

397 laps is the longest distance ever covered during the Le Mans 24-Hours. The 2010 winners all had a Porsche junior background (Timo Bernhard/Romain Dumas/Mike Rockenfeller). They shared an Audi when they covered the 5,410.713 kilometres.

> 400 HP contribute the two different energy recovery systems (front axle brakes and exhaust). On demand, an electric engine powers the front axle and turns the 919 Hybrid in to what is in effect, a temporary four-wheel drive car.

< 500 HP is the output of the 919’s turbo charged petrol engine that drives the rear axle.

919 The 919 Hybrid is the only LMP1 that regains energy not only when braking but also when accelerating, thanks to exhaust energy recovery. 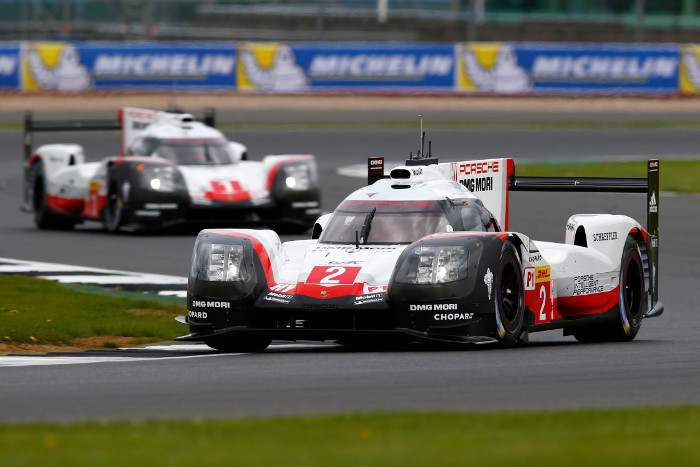 1900 was the year when Ferdinand Porsche created the first car with a serial hybrid drive. Its name “Semper Vivus” translates to “always alive”. Two-wheel hub electric engines (20 ampere at 90 volt each) and a battery were constantly serving two combustion engines by a dynamo. At the 1901 Semmering hill climb race, an improved version of the Lohner Porsche prototype comfortably achieved the best time of an electric car. Afterwards a small series of two-seater electric compact cars were built.

2013 For two hours the smell would linger for if a driver broke wind in the car commented Neel Jani – unhappy with the cockpit ventilation of the first test car back in 2013.

62,000 kilowatt hours of electrical energy have been recuperated by Porsche 919 Hybrids during a total mileage of 321,000 kilometres (testing and race weekends) from their two energy recovery systems (brake energy from the front axle and exhaust energy). If the 919 was a “power station”, this energy would have been the capacity to power a village of 15 houses, each occupied by four people, for an entire year.

120,000 revs and more per minute of the turbine that sits in the exhaust and drives a generator. To recover energy also at low engine revs, the turbine has variable geometry. The turbo charger instead works without VTG.
128,000 kilometres have been completed by various variants of the Porsche 919 Hybrid from early 2014 until the end of May 2017 during race weekends (including practice and qualifying).

243,000 kilometers had been clocked up by the identical specification of the Porsche 919 Hybrid’s water pump with no issue when it suddenly failed at 23:13 hrs in 2016 at Le Mans. At 01:56 hrs, Bernhard/Hartley/Webber returned to the race now 39 laps be-hind the leaders.

If you’ve made it this far, congratulations! You are a die-hard Porsche fan who will stop at nothing to understand everything in order to develop encyclopedic knowledge about one of the most respected names in motoring.