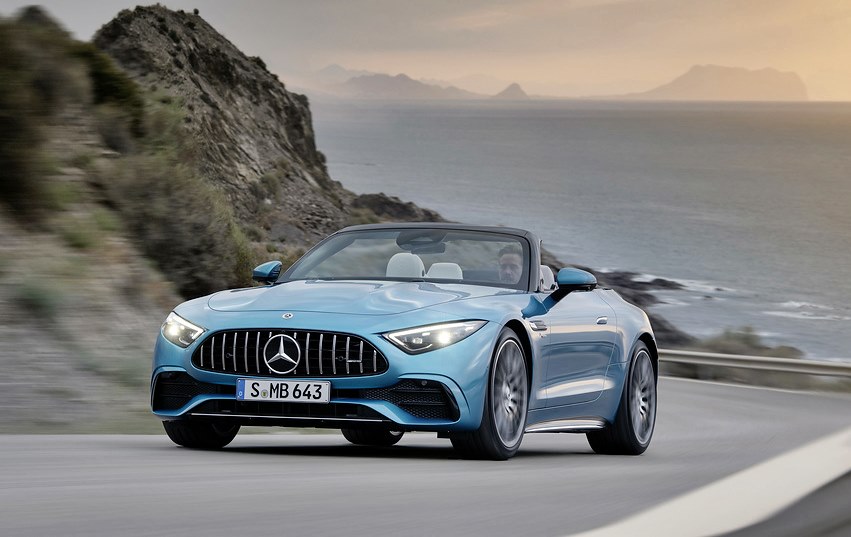 electric exhaust gas turbochargerThe trend of downsizing engines which has been going on for the past 20 years has been apparent in all segments and even sportscars now see engines with smaller displacements, but still able to generate high outputs to maintain high performance. New technologies have helped in this respect, and for companies like Mercedes-AMG, technologies developed for Formula 1 cars are being adapted for road cars.

This is the case with the SL 43, a new entry-level version of the roadster range. In the 70 years of its development history, the SL has evolved from a thoroughbred racing car to an open-top luxury sportscar – and it has typically had large and powerful engines. For this new model, there is a 2-litre 4-cylinder engine which may depart from the norm of V8s but is not new to the SL either. In the 1950s and 1960s, there were also SL models with 1.9-litre engines with 4 cylinders too. 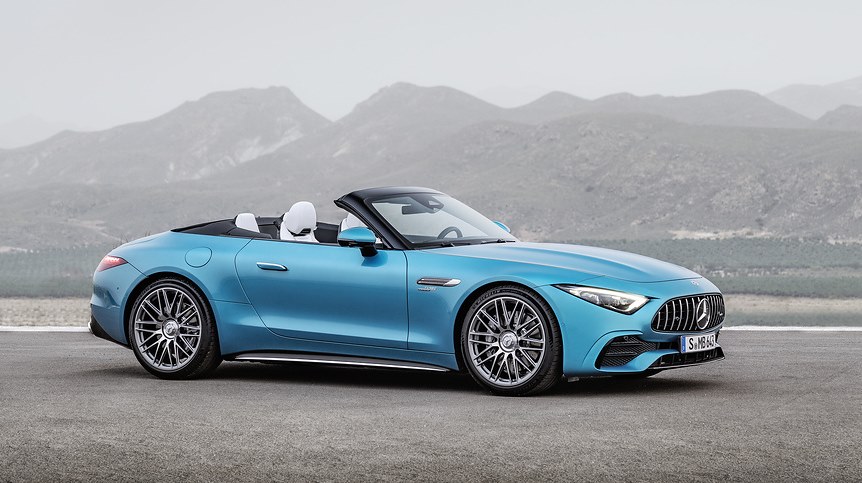 The 2-litre engine in the new SL 43 is a M139 unit and lays claim to being the first in the world with an electric exhaust gas turbocharger for a production model. This technology comes from Formula 1, having been used in the multiple championship-winning racing cars of the Mercedes-AMG Petronas F1 Team for many years. 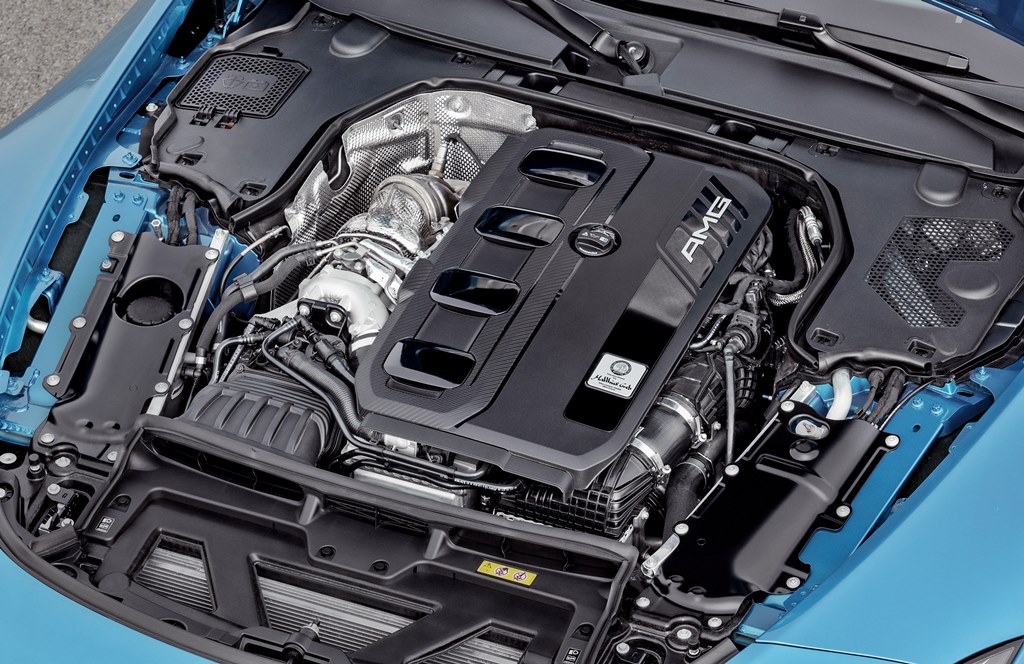 The advantage of having this little motor is significantly improved and immediate response from idle and across the entire engine speed range. The combustion engine (similar to the ones used in models like the C-Class) responds even more spontaneously to accelerator pedal input, while the electrification of the turbocharger enables higher torque at low revs. Even when the driver takes their foot off the accelerator or applies the brakes, the technology of the electric turbocharger is able to maintain the boost pressure at all times enhancing response. 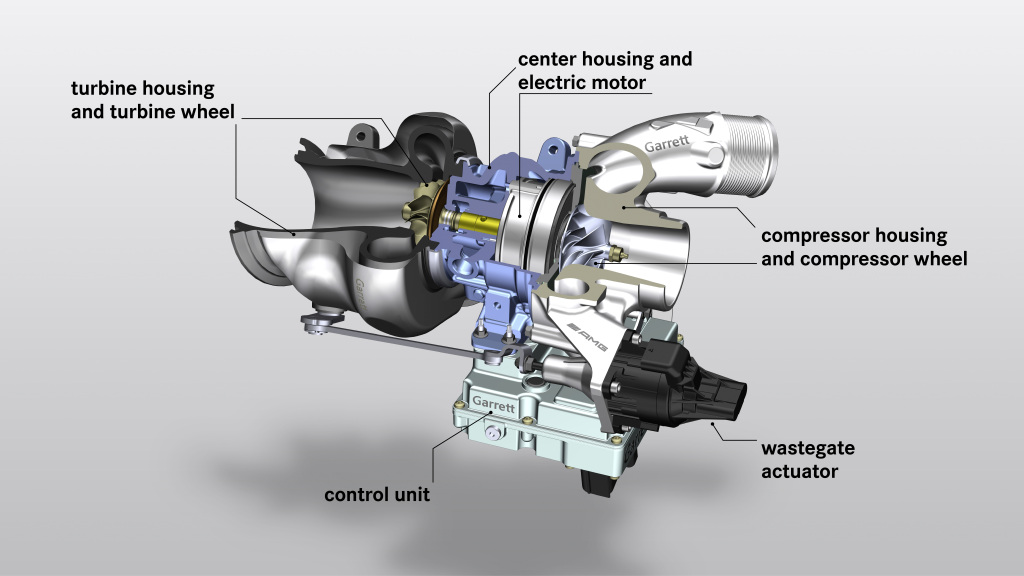 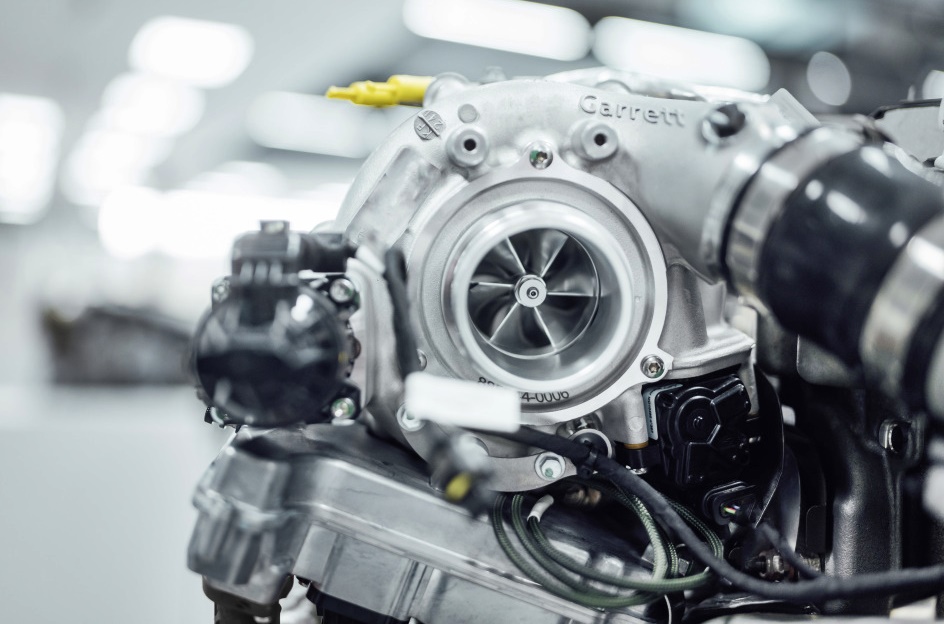 The motor, powered via the 48V on-board electrical system, along with the turbocharger and power electronics are connected to the engine’s cooling circuit to ensure an optimal temperature environment at all times. Maximum output is 381 bhp at 6,750 rpm, with 480 Nm of torque available between 3,250 rpm and 5,000 rpm. Depending on the situation, the system can also provide a  boost of 14 bhp briefly from the belt-driven starter generator (RSG). The second-generation RSG, in addition to the temporary power boost. enables functions such as gliding mode and energy recovery for greater efficiency.

AMG SPEEDSHIFT MCT 9G transmission
Drive to the rear wheels is through the AMG SPEEDSHIFT MCT 9G transmission (MCT = Multi-Clutch Transmission) which is used for the first time. A wet start-off clutch replaces the torque converter, its advantage being reduced weight and, thanks to its lower inertia, optimised response to accelerator pedal input, especially during spurts and load changes. There is also the RACE START function for quicker departures from standstill. 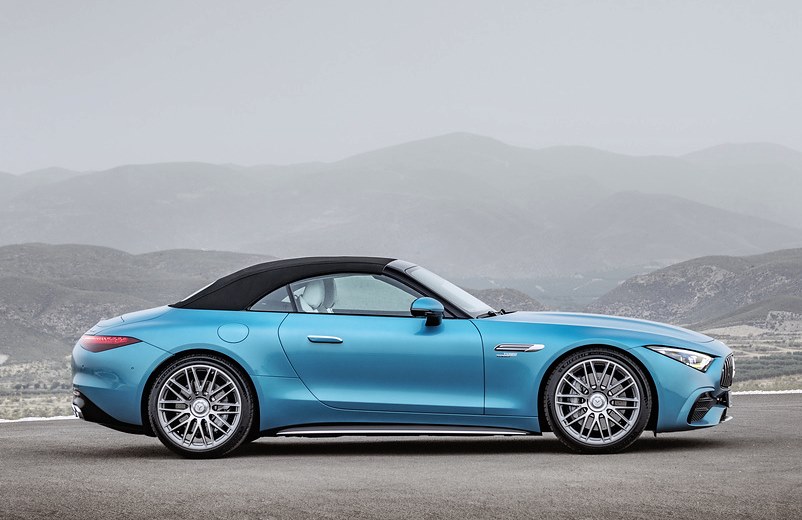 Performance claims show that this entry-level version is no less worthy of the SL badge, wit its ability to go from 0 to 100 km/h in 4.9 seconds and reach a top speed of 275 km/h. Fuel consumption, depending on the driver’s behaviour, can be up to 11.2 kms/litre, it is claimed.

Aluminium composite structure
The latest R232 series SL has a completely new architecture developed by Mercedes‑AMG. The new dimensional concept allows a 2+2 seating configuration for the first time since 1989. Constructed from lightweight aluminium composite, the chassis consists of an aluminium space frame with a self-supporting structure for maximum rigidity. The bodyshell architecture focusses on lateral and longitudinal dynamics while offering comfort and ensuring safety.

In the new SL, the intelligent material mix enables the highest possible rigidity at a low weight. The materials used include aluminium, magnesium, fibre composites and steel, from which the windscreen frame is made, for example. This serves as roll-over protection in conjunction with the roll-bar system behind the rear seats which pops up at lightning speed when needed. 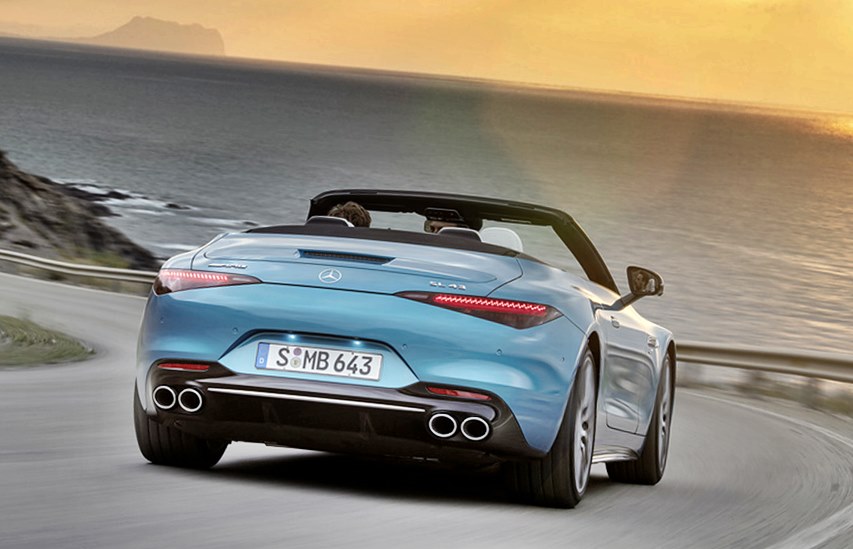 Entry-level model features
While the overall form and SL proportions are similar, the exterior of the SL 43 has some details which differ from the two 8-cylinder models. For example, it has differentiated front and rear aprons as well as round instead of angular double tailpipe trim. 19-inch light-alloy wheels as standard but customers can also opt for aerodynamically optimised light-alloy wheels with diameters of 20 or 21 inches. The 20-inch wheels come with plastic aero rings that save additional weight.

Active aerodynamics
A technical highlight for improving aerodynamics is the AIRPANEL active air control system. The horizontal louvres behind the upper air intake are electronically controlled and can be opened and closed with actuator motors. In this way, the airflow is directed according to demand, thus improving aerodynamic performance. 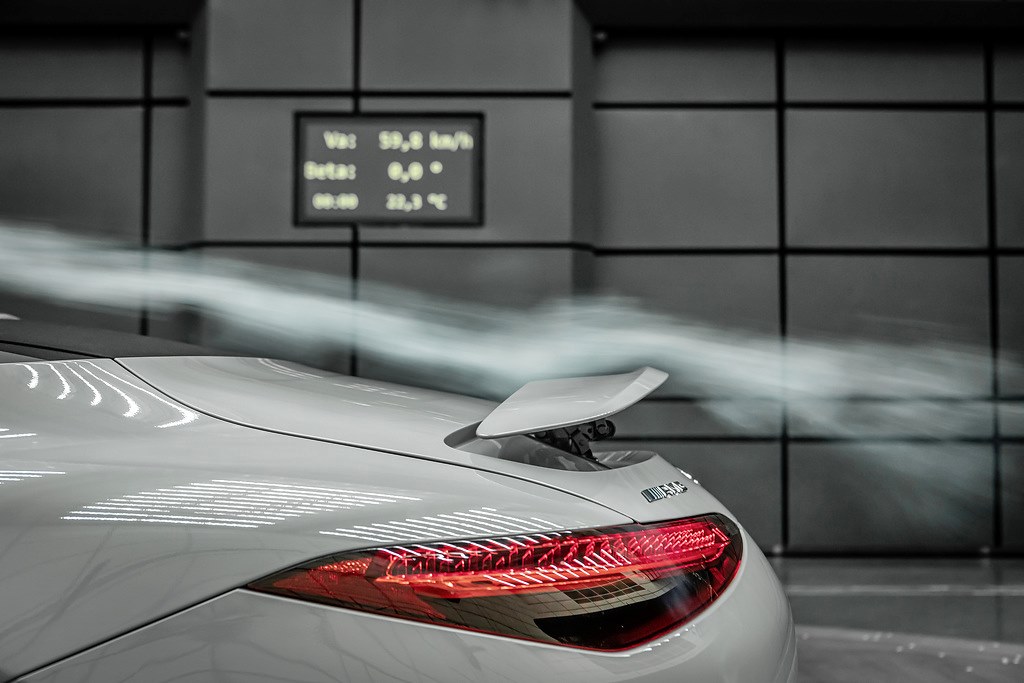 Normally the louvres are closed to reduce air resistance. Should certain operating temperature levels be exceeded, the louvres will open and allow cooling air to flow to the heat exchangers. This calls for highly intelligent and fast control. When the temperature drops below the defined level, the louvres will automatically close again.

The same applies to another active aerodynamic component – the retractable rear spoiler integrated into the car’s profile. It changes its position depending on driving conditions. Numerous parameters are considered to determine the position – driving speed, the longitudinal and lateral acceleration and steering speed are among the factors. The spoiler can assume 5 different angles when speeds are more than 80 km/h to either optimise handling stability or reduce drag.

Lightweight fabric soft top
The latest SL uses a soft top instead of the previous metal vario-roof, removing 21 kgs of weight. The Z-fold saves space and weight, and makes it possible to dispense with a conventional soft-top compartment cover. For convenience, an electric motor opens and closes (at speeds up to 60 km/h) the soft top within 15 seconds. Switching to a soft top also lowers the centre of gravity, benefitting driving dynamics and handling.

‘Hyperanalogue’ cockpit
The interior of the SL 43 has a combination of analogue geometry and the digital world which the designers refer to as ‘hyperanalogue’. This is exemplified by the fully digital instrument cluster which is integrated into a three-dimensional visor. The symmetrical instrument panel is designed as a powerful wing and structured into an upper and lower section. The highlight on the dashboard are the 4 galvanised turbine nozzles which surfaces merge into the instrument panel in the form of powerful power domes. Despite symmetry, the cockpit design creates a clear focus on the driver. 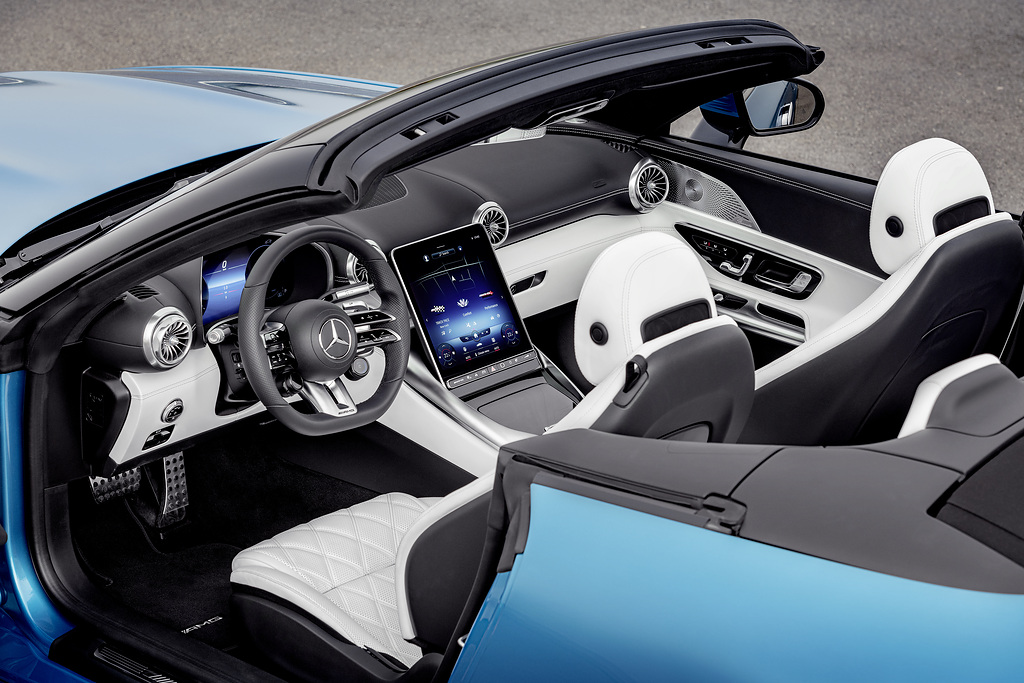 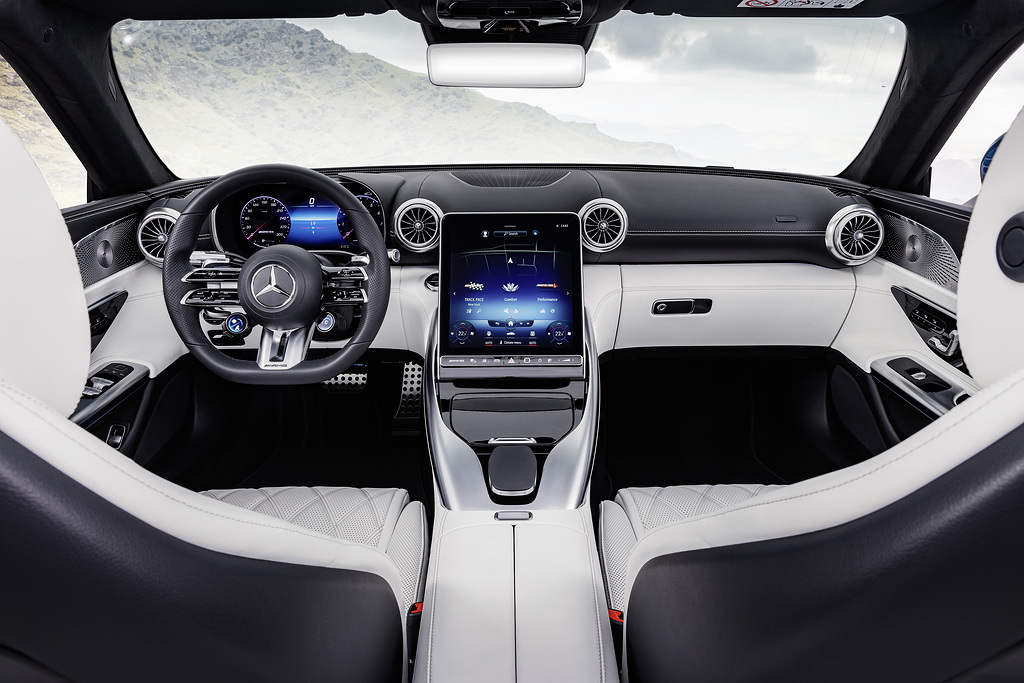 “In its long history, the SL has repeatedly set technological milestones. For example, while the legendary 300 SL Gullwing in 1954 was the world’s first series-produced passenger car with direct petrol injection, the new Mercedes-AMG SL 43 is now the very first series-produced vehicle with an electric exhaust gas turbocharger. With this technology, the SL also has an outstanding performance range in its entry-level version. This means that our seemingly smallest SL combines the typical AMG Driving Performance with luxury and comfort at the absolute top level. What’s more, with this innovative engine we are undoubtedly also appealing to a wider clientele,” said Philipp Schiemer, Chairman of the Board of Management of Mercedes‑AMG GmbH.