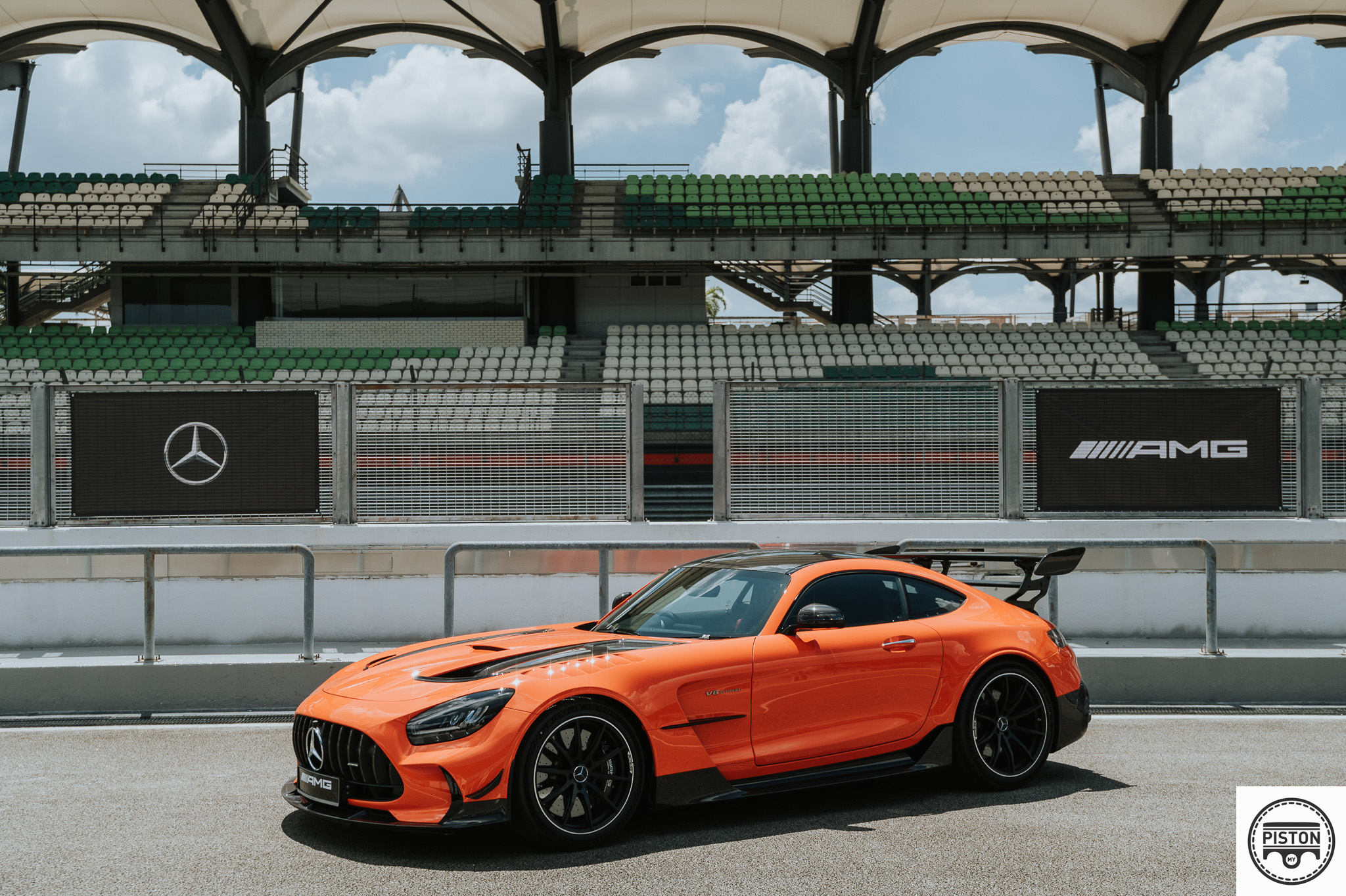 Since 2006, the Black Series High-Performance Cars from Mercedes-AMG have never failed to impress. From the puristic SLK 55 AMG Black Series to the latest GT Black Series, the exclusive range from the specialists at the carmaker’s high-performance subsidiary has been synonymous with a very special type of car.

The GT Black Series launched by Mercedes-Benz Malaysia today continues with uncompromisingly sporty and expressive design, with the most consistent technology transfer from motorsport to a  production car. It is designed for the racetrack but is road-legal too. 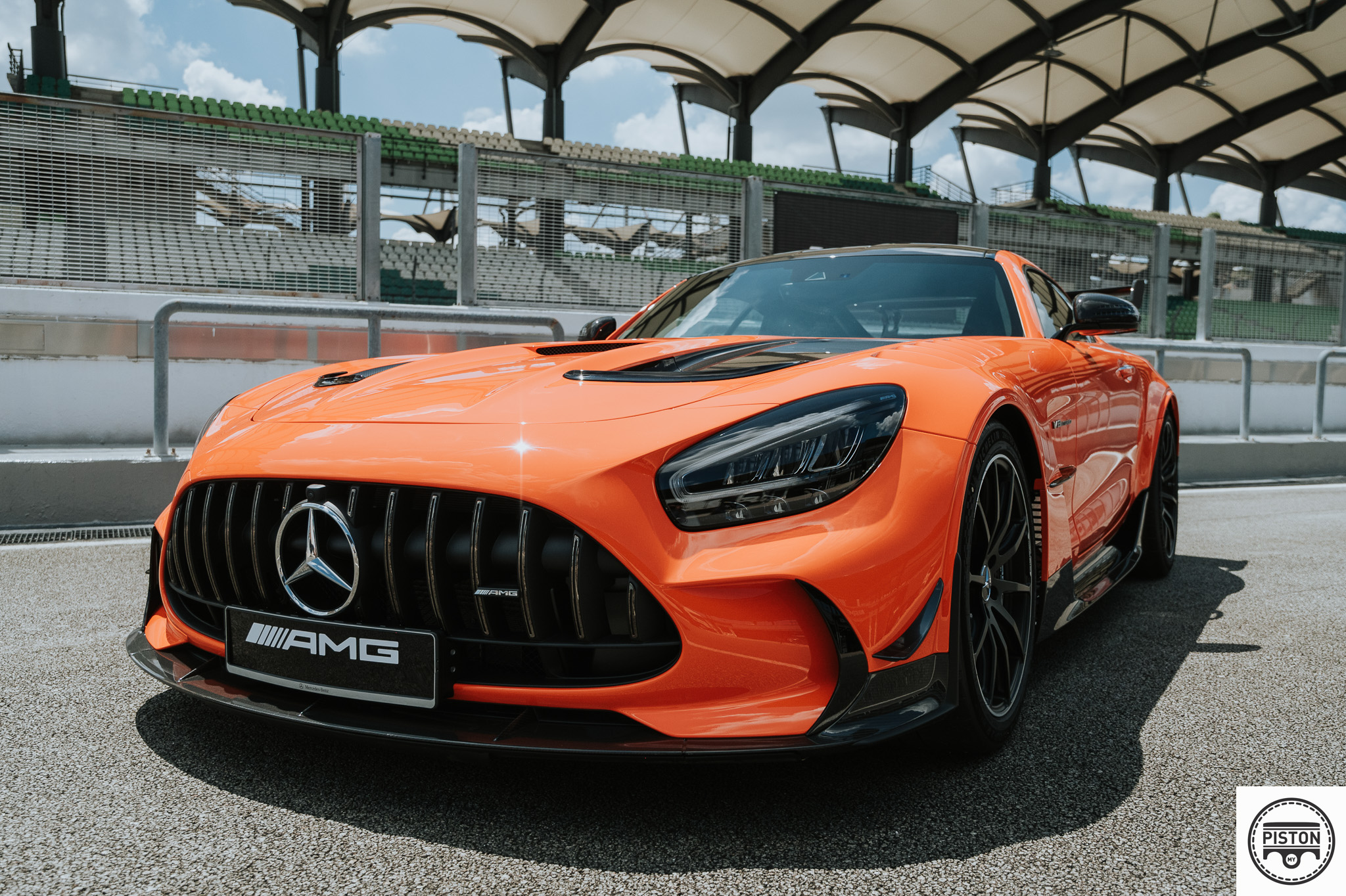 Improved V8 biturbo engine
The AMG GT Black Series represents a new highlight in this approach. It is the most powerful Mercedes-AMG with a 4-litre V8 biturbo engine, adaptable to special conditions of various racetracks.  Further development puts significantly more power (730 ps) than the previous flagship model of the AMG GT family, with even more agile throttle response, thanks to maximum torque of 800 Nm.

What does this improved engine do for performance? It enables the sportscar to go from standing still to 100 km/h in a claimed 3.2 seconds, crossing 200 km/h in less than 9 seconds, and on to a top speed of 325 km/h (only on racetracks). The superlative performance level is not only reflects in the power delivery but also with a distinctive soundtrack. 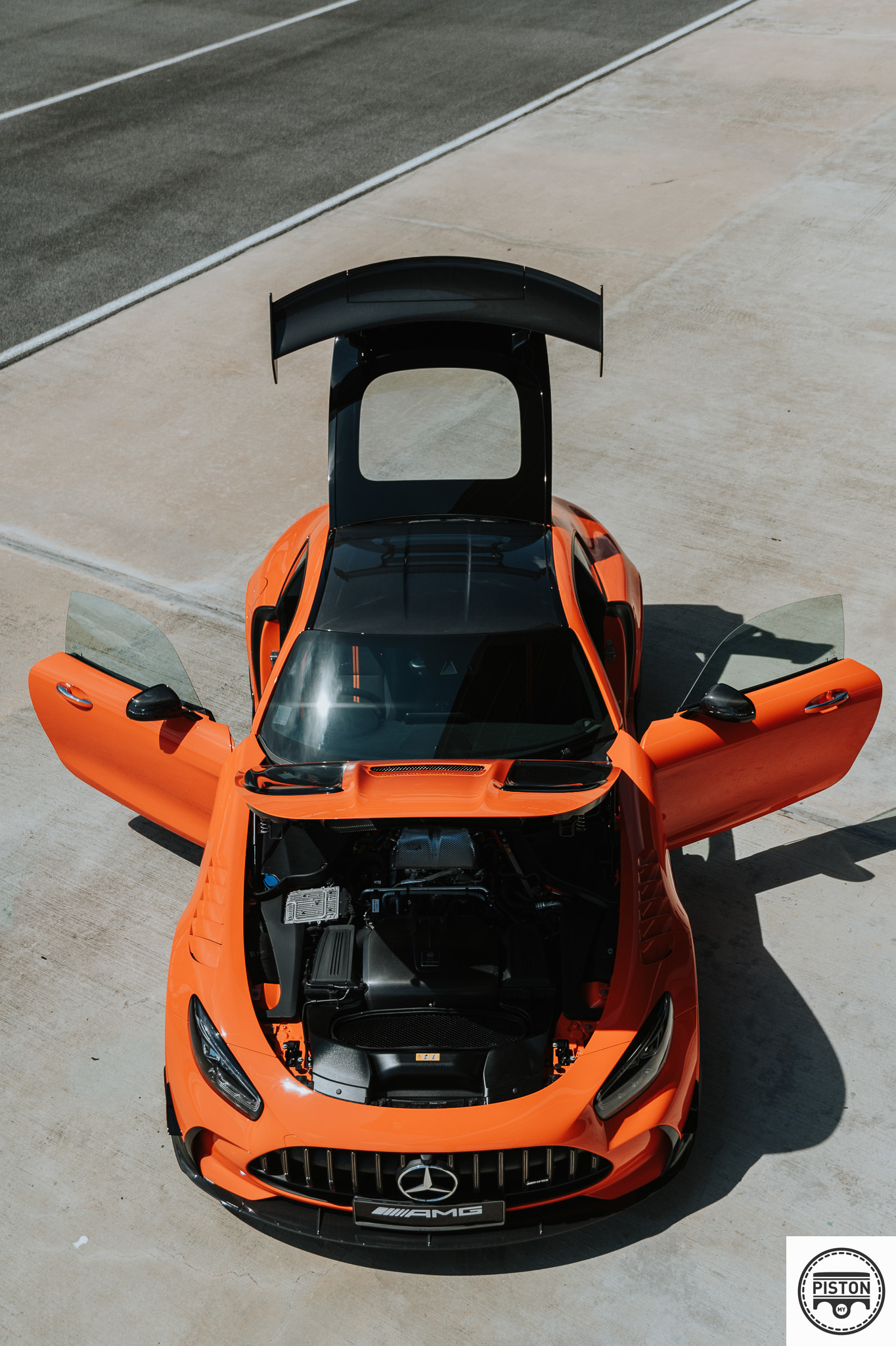 Power goes to the rear wheels through a 7-speed AMG SPEEDSHIFT DCT 7G dual-clutch transmission. The unit is located on the rear axle in a transaxle arrangement for optimal weight distribution, as is the case for all AMG GT models. It has been modified for use in the AMG GT Black Series and adapted to the increased torque of 800 Nm.

The Race Start function is now even more impressive, thanks to the increased starting revs, the more sensitive wheel slip control and the sports tyres fit for the racetrack. Furthermore, the transmission cooling has been adapted to the tougher requirements, and the transmission ratios have also been slightly modified. 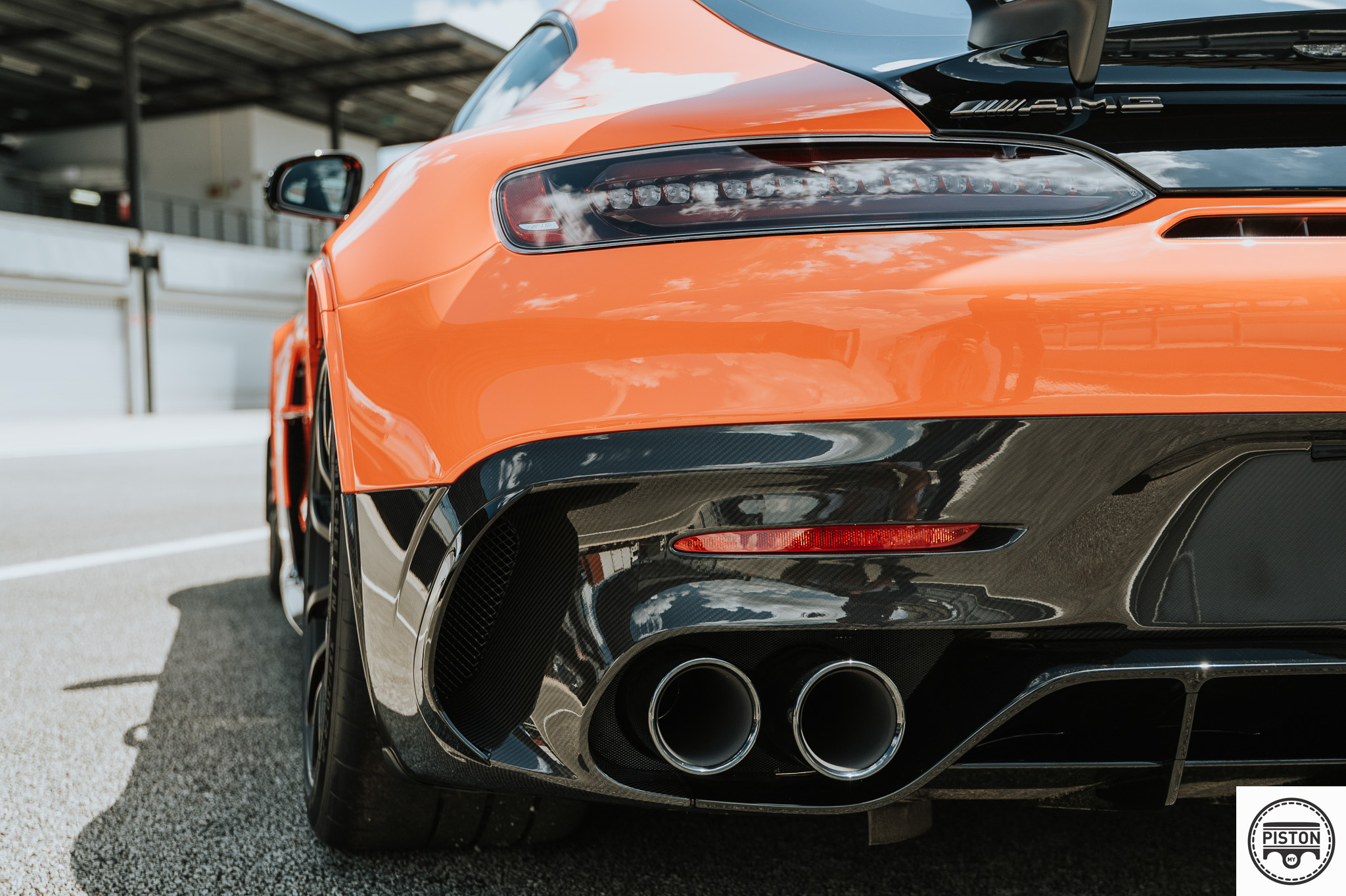 At the rear is the new apron with a large diffuser, two rounded twin tailpipe trims on the outside left and right, side wheel arch ventilation, and the innovative rear aerofoil concept. Both aerofoil blades are made from carbonfibre, can be mechanically adjusted and therefore adapted to various track conditions. The second, lower positioned blade was made particularly small and narrow because this is ideal for the air arriving from the front of the car. 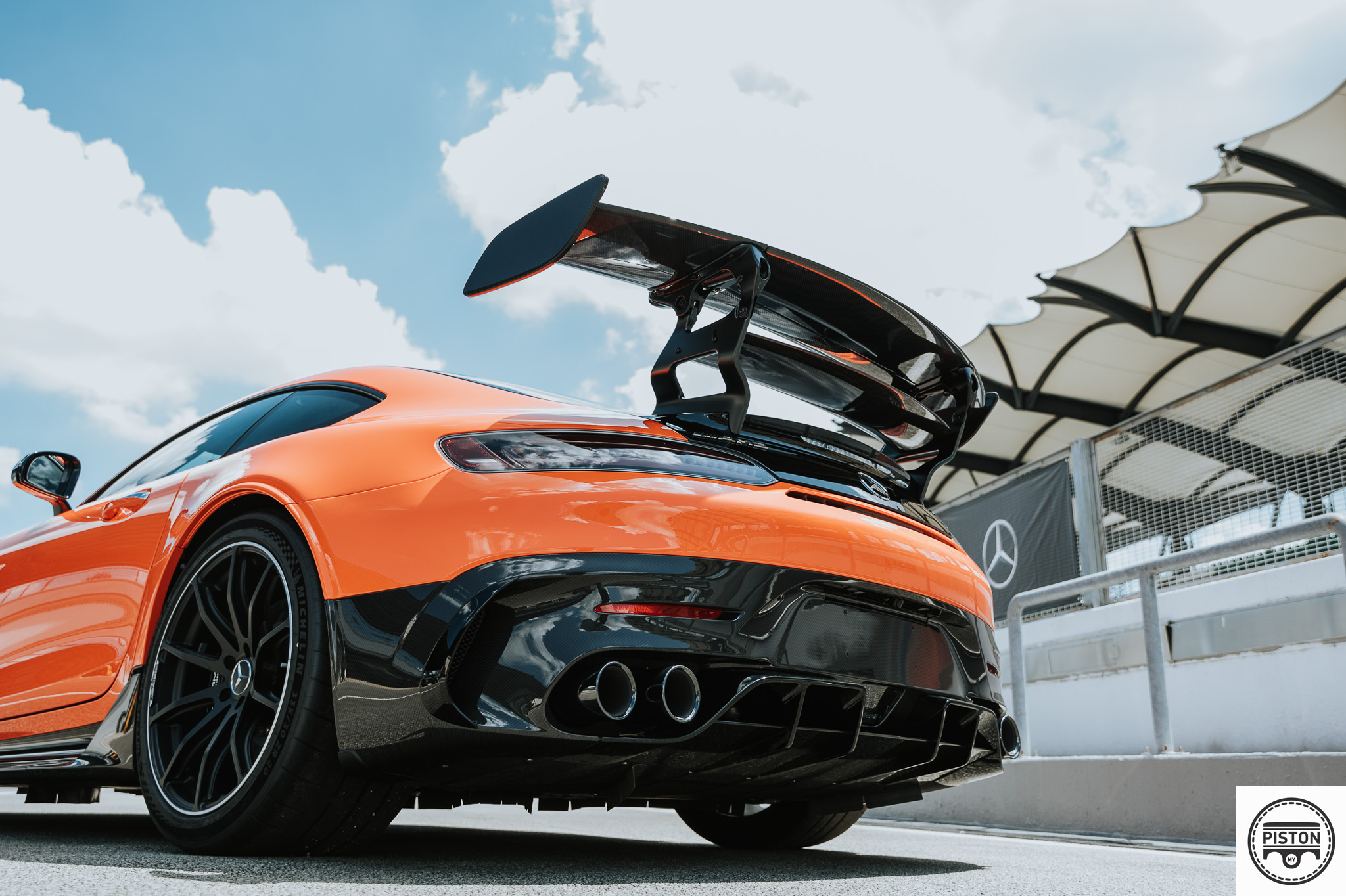 The detailed aerodynamic work also includes the now almost fully panelled underbody. This area must not only meet aerodynamic requirements but also thermal ones (for heat dissipation). The flat underbody is equipped with specially designed longitudinal fins. These air channellers have been meticulously optimised to ensure optimal airflow to the rear diffuser. The entire package accelerates air flow, significantly increasing downforce up to well over 400 kgs at 250 km/h.

The lightweight carbonfibre roof, with a sunken centre, as well as the carbonfibre tailgate with small spoiler lip and larger rear windscreen made from lightweight thin glass, are all key components of the intelligent material mix and lightweight construction. Moving to the front of the car, the glass used to make the laminated glass windscreen is likewise thin and therefore light in weight. 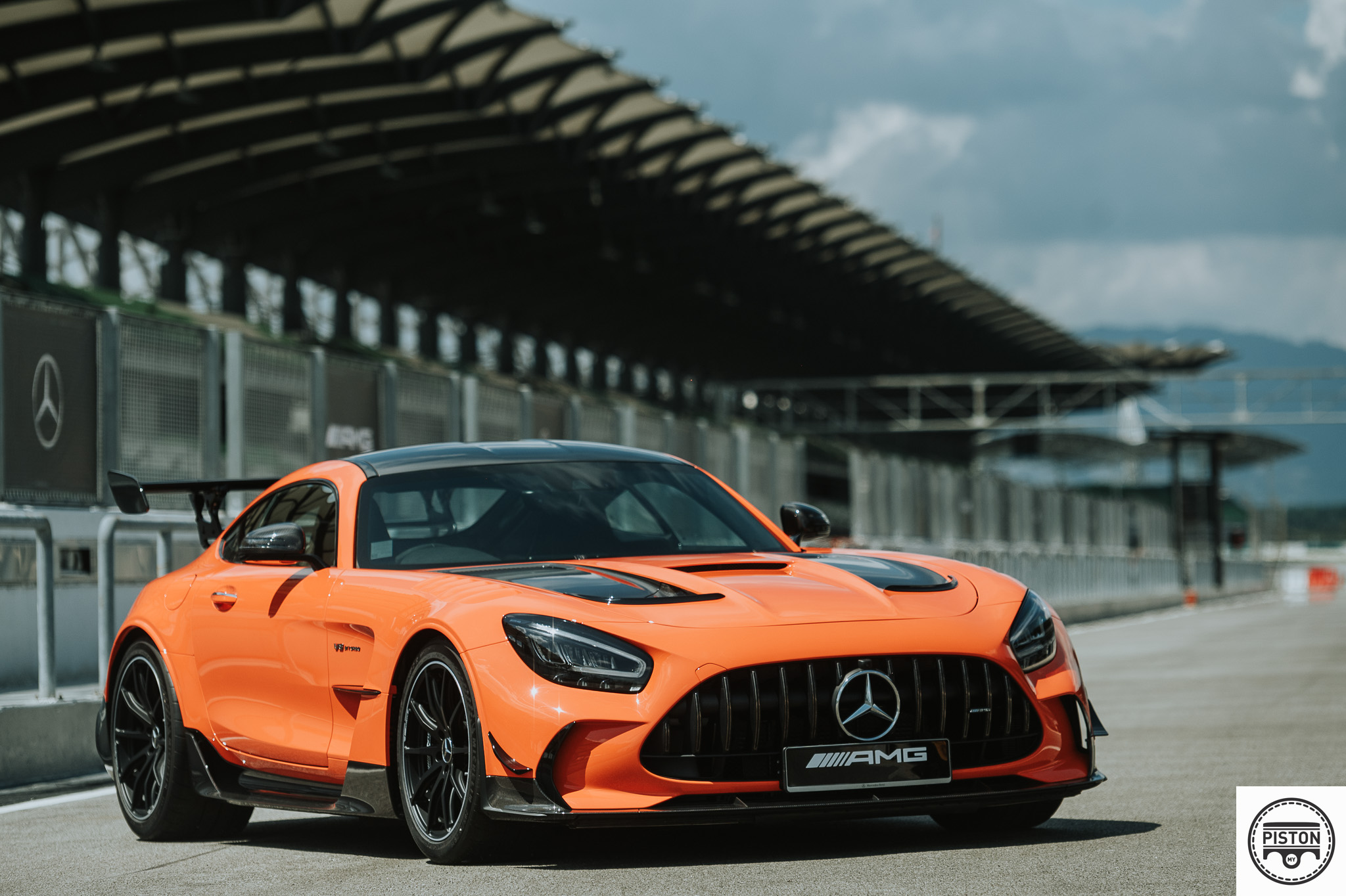 AMG coil-over suspension
The double wishbone concept locates the wheel with high camber and toe-in stability. This enables high cornering speeds and gives the driver optimum road feel when cornering at the extreme limits. Wishbones, steering knuckles and hub carriers on the front and rear axle are made entirely from forged aluminium in order to reduce the unsprung masses. The spherical bearings on the upper and lower wishbones of the rear axle come straight from motorsport.

Their design means they have no play, which means toe-in and camber do not change even under high loads. The coil-over suspension offers yet another advantage which serious racing drivers value greatly: the wheel load distribution can be individually adapted for every wheel and thus optimise handling.

AMG TRACTION CONTROL
For use on closed racetracks in ESP OFF mode, the AMG TRACTION CONTROL enables the driver to get individual support for controlling the immense power of the Black Series – and without any ESP brake intervention whatsoever. The level of support can be fine-tuned, providing the ideal level of assistance for each driver and each track situation. Control is exclusively via corresponding maps in the engine electronics and without any intervention in the ESP system, as is also the case with the GT3 racing car.

The AMG development has a major advantage over conventional systems in that it anticipates situations with the help of a friction coefficient evaluator and other data processed by a control unit within a fraction of a second. The maximum permissible drive slip on the rear wheels is calculated depending on the selected AMG TRACTION CONTROL level. When the wheels reach this level of slip during acceleration, the traction control modulates the engine output so that this level is not exceeded and the vehicle continues accelerating with this specified slip.

An exclusive contrasting colour
The interior design emphasises the leading position of the AMG GT Black Series. It may be for the racetrack but there’s exclusive nappa leather combined with sporty DINAMICA microfibre in black with orange contrasting topstitching. The instrument panel and the newly designed lightweight door panels, which are now equipped with loop pull handles instead of conventional handles, are trimmed in black DINAMICA microfibre. 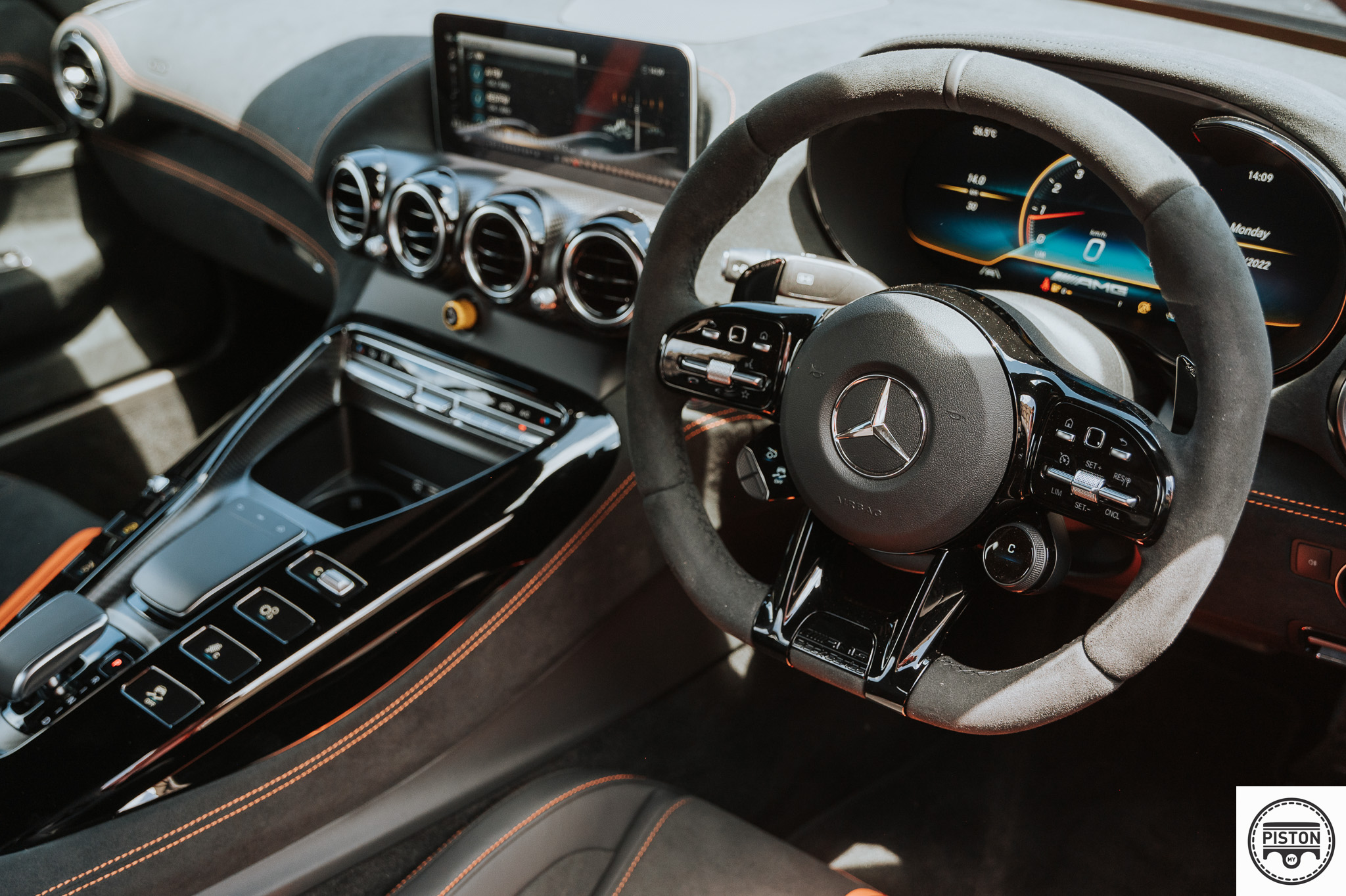 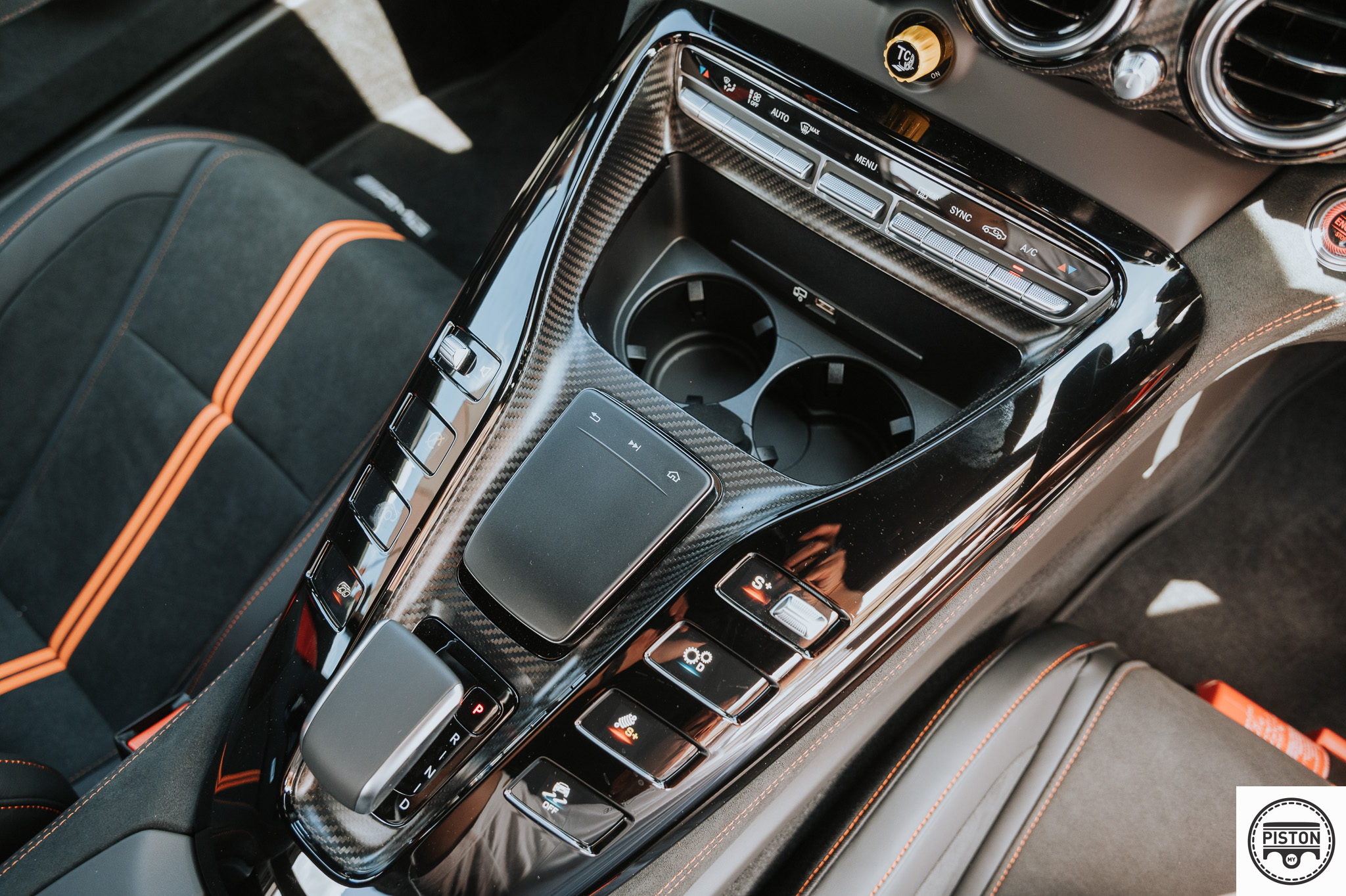 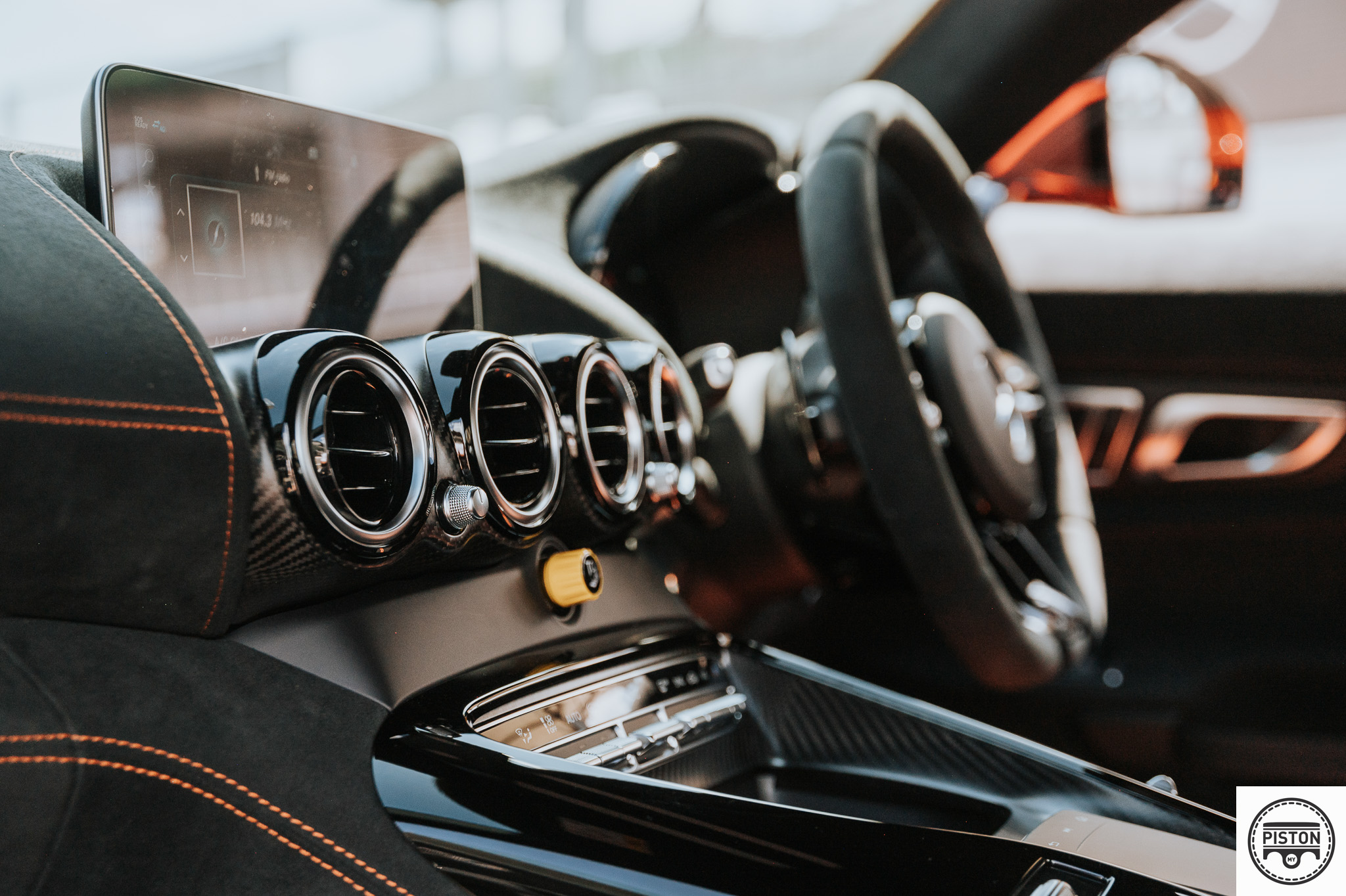 The fully digital instrument displays from the AMG GT family with an instrument cluster measuring 12.3 inches ahead of the AMG Performance steering wheel, and a 10.25-inch multimedia monitor on the centre console. The instrument cluster offers different designs with the three AMG-specific display styles to suit driver preference. Coloured display buttons in the V-shaped central console integrate the display and control of transmission logic, suspension, ESP, exhaust system, rear aerofoil flap and start/stop function. As they still have a mechanical pressure point, they can also be operated whilst wearing racing gloves.

Mercedes-Benz Malaysia has an allocation of 13 units of the AMG GT Black Series, each having a base price of RM3 million (without insurance). And at the time of writing, all of them already have an owner waiting for delivery. Whether or not these owners will use them as the engineers developed them – for the racetrack – remains to be seen, but they will certainly be a rarity on our roads. 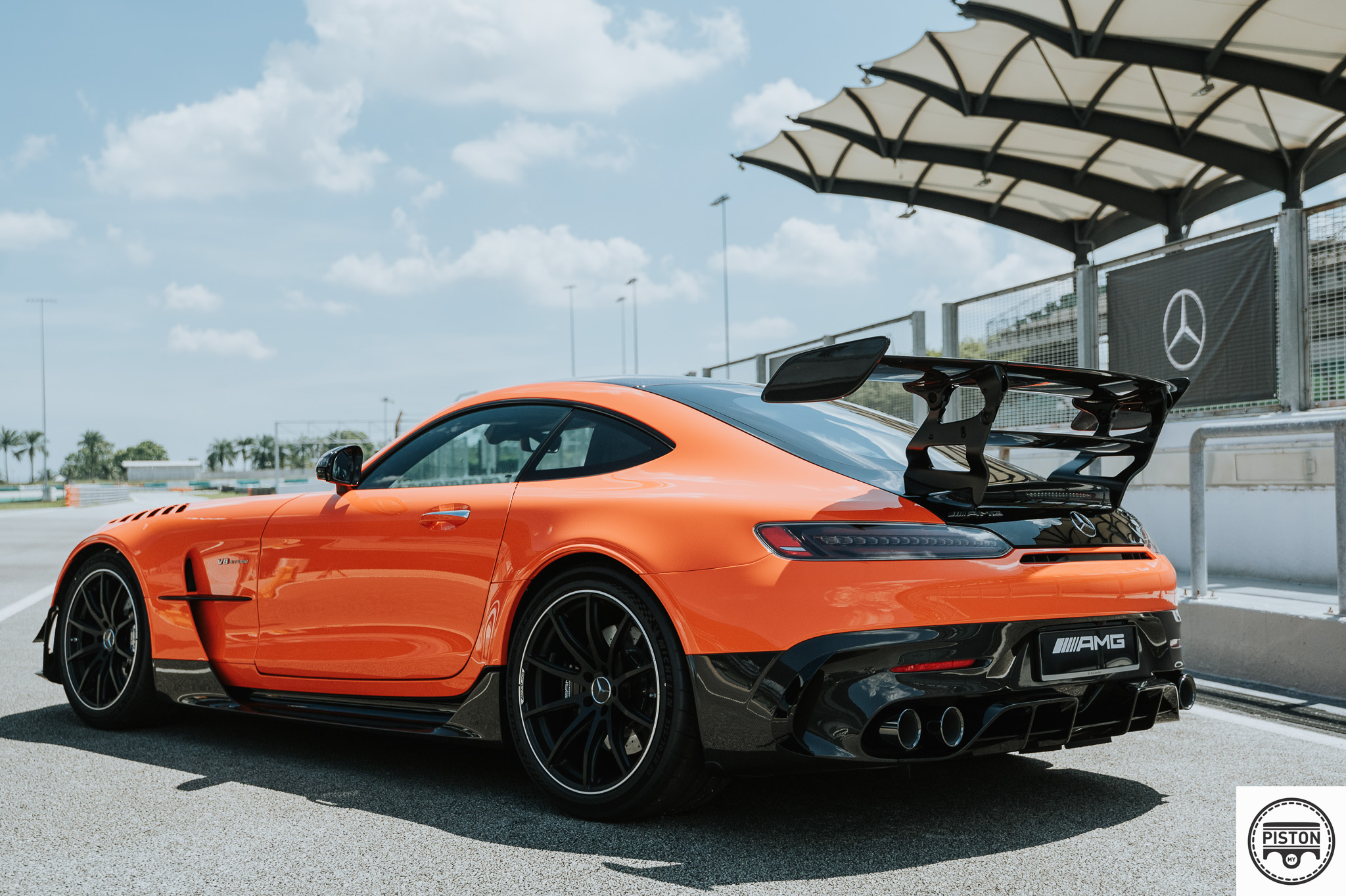