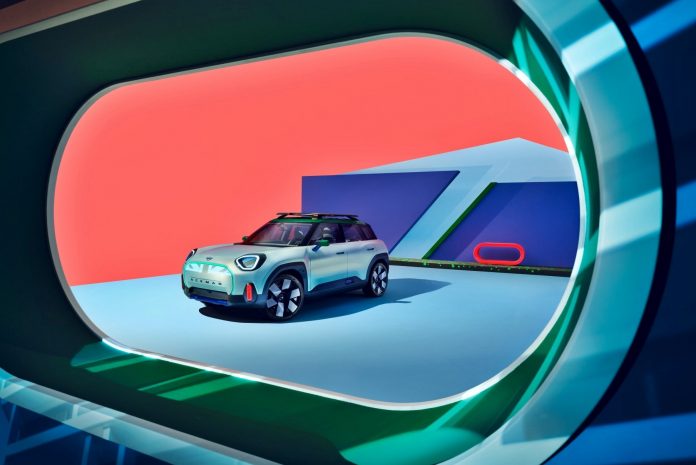 Starting off as just a little car with simple engineering for ease of construction and low cost, the Mini has evolved over 60 years into a premium product that is design-based and technologically innovative. It has also grown substantially in size but the designers of the modern MINI (capital letters differentiate the original and the modern cars) have stuck to many of the original ideas which Alec Issigonis applied.

Soon, a new generation will be born and as an initial preview of its design, MINI is presenting the Concept Aceman. In this next generation, the MINI Cooper in the iconic 3-door bodystyle, which has been reinterpreted time and again over its entire history, will be joined by a crossover model for the first time. 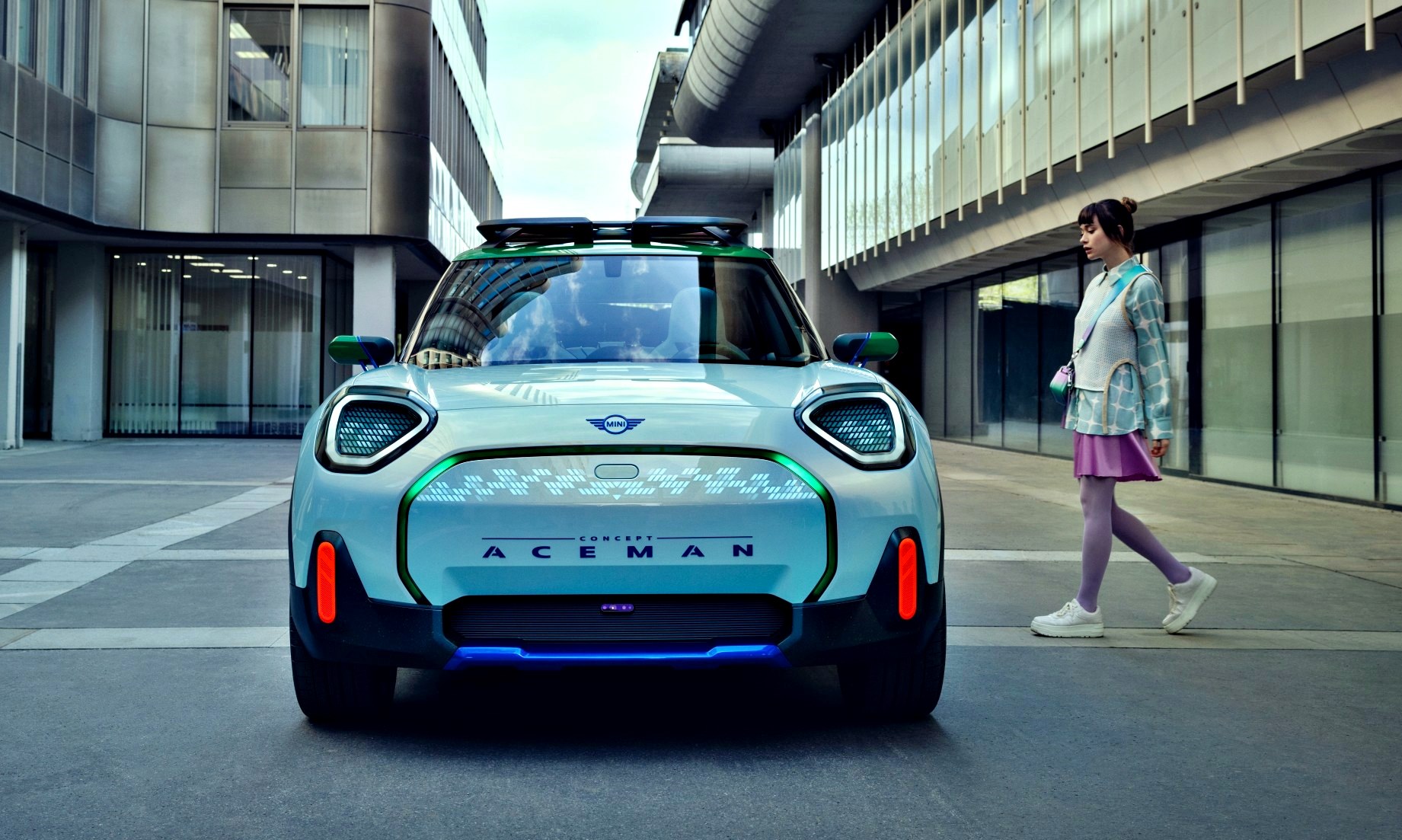 “The MINI Concept Aceman provides an initial glimpse of a completely new vehicle, bridging the space between the MINI Cooper and the MINI Countryman in the model family’s future,” said Stefanie Wurst, Head of the MINI Brand. “This concept car reflects how MINI is reinventing itself for its all-electric future and what the brand stands for: an electrified go-kart feel, an immersive digital experience and a strong focus on a minimal environmental footprint.”

A new MINI design era
“The design language of the MINI Concept Aceman heralds the beginning of a new design era for MINI,” explained Adrian van Hooydonk, Head of BMW Group Design. “Design features typical of the MINI brand have always been unmistakable. We are returning to these now, but at the same time consistently combining them innovative technology. With this approach we are redeveloping the MINI design icons, with all their analogue strengths, for the digital future.” 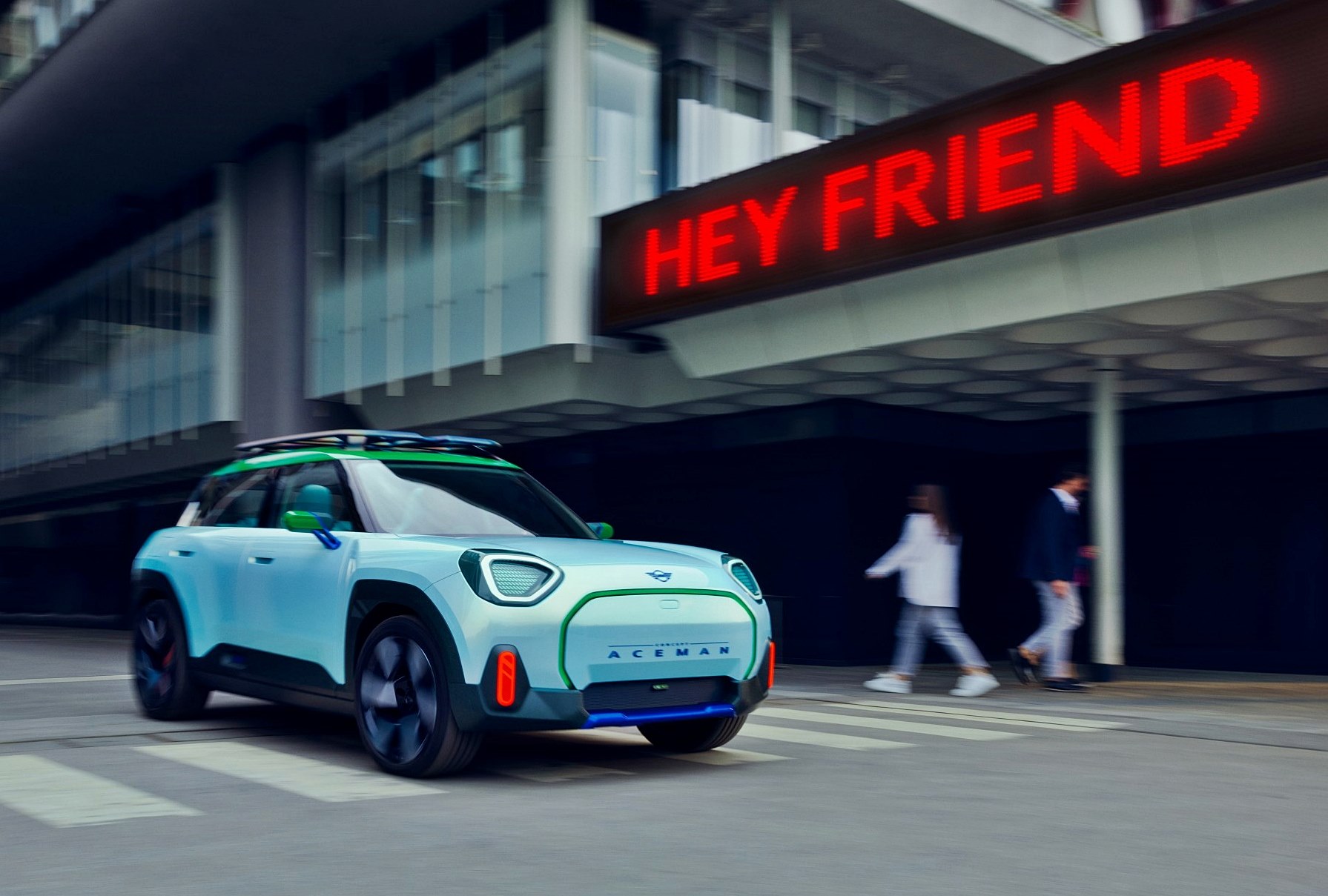 Along with the clear and reduced exterior and interior design, the holistic user experience of light, movement, interaction and sound also combine to define this style. Surfaces constructed from knitted recycled textile with fresh colour contrasts combine with seamless digital controls with a new OLED display as the central interface.

The all-electric models of the next generation are also given an independent sound design for the first time, providing emotionally compelling drive sounds and an authentic background for the new Experience Modes.

Creative use of space reinterpreted
Everything about the appearance of MINI Concept Aceman expresses agility and a self-confident presence. This merges distinctive features of the brand’s two most successful models, the MINI Cooper and the MINI Countryman, to create a modern interpretation of a crossover model.

“The purely electric vehicle concept means the design can again be geared more towards MINI’s traditional basic values, in terms of the principle of using space creatively,” said Oliver Heilmer, Head of MINI Design. “This creates models that take up little space on the road while offering even more comfort, more versatility and more emotion on the inside than ever before.” 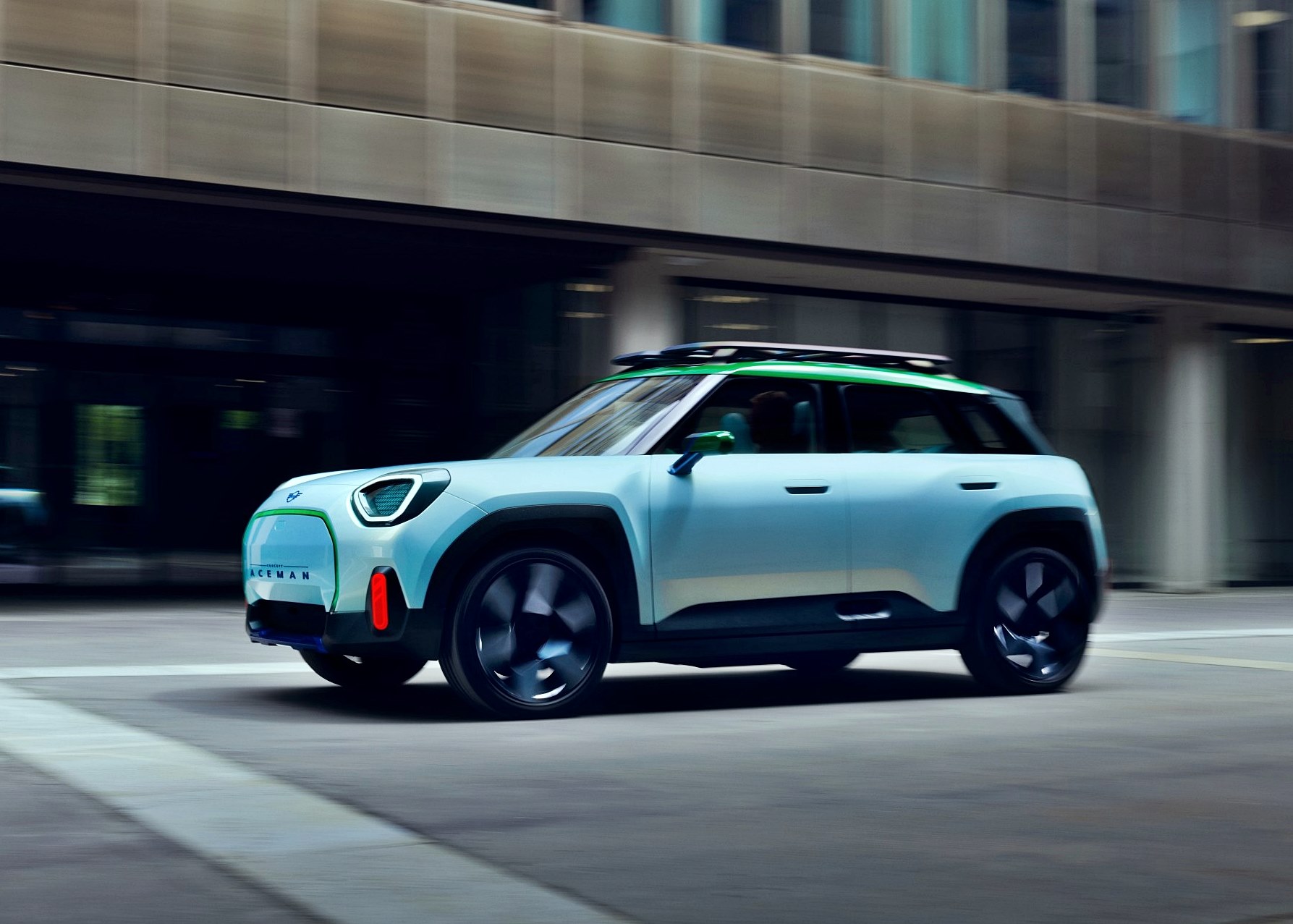 A functional two-box design with short overhangs creates the maximum of space for occupants and luggage on a minimal surface area. Its exterior dimensions are 4.05 metres in length, a width of 1.99 metres and a height of 1.59 metres. The Concept Aceman has 4 doors and a large boot lid with interior seating for 5. The classic 3-way division of body, all-round window graphics and roof is reinterpreted. A flush transition between the vehicle body and glass surfaces makes the most of the aerodynamic properties.

The clear and reduced design completely dispenses with the chrome trim around the edges that was common in earlier model generations. Wide surrounds on the lower edge of the body, strongly contoured wheel arches, large wheels, a striking roof rack, and front and rear valance panels styled as an underride protection emphasise the solid all-round characteristics of a crossover model. 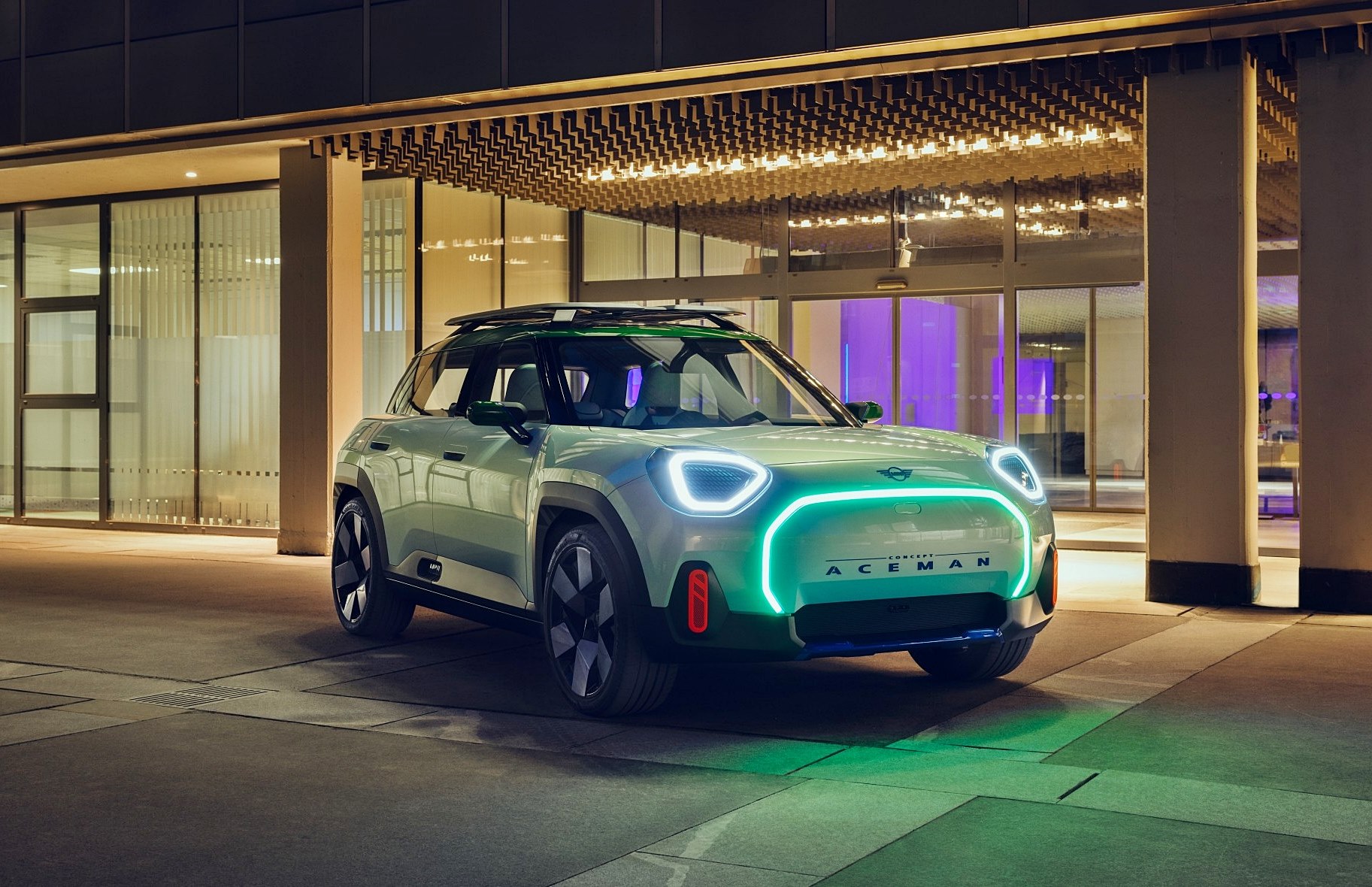 The upright front of the Concept Aceman strikingly announces its presence. The brand’s iconic design features have been reinterpreted to reflect its crossover characteristics and purely electric drive. The radiator grille element at the centre of the vehicle front is surrounded by clear surfaces, the traditionally hexagonal outline having been further refined into an octagonal contour.

The new design is accentuated by an illuminated surround. The LED contour lighting in a shade of light green provides a striking light signature both in daytime running lights and in night design. The central grille element is completely closed with matrix LED units are integrated in its upper section to create impressive lighting effects. The contour of the lights follows through to the surfaces of the outer areas of the bonnet. 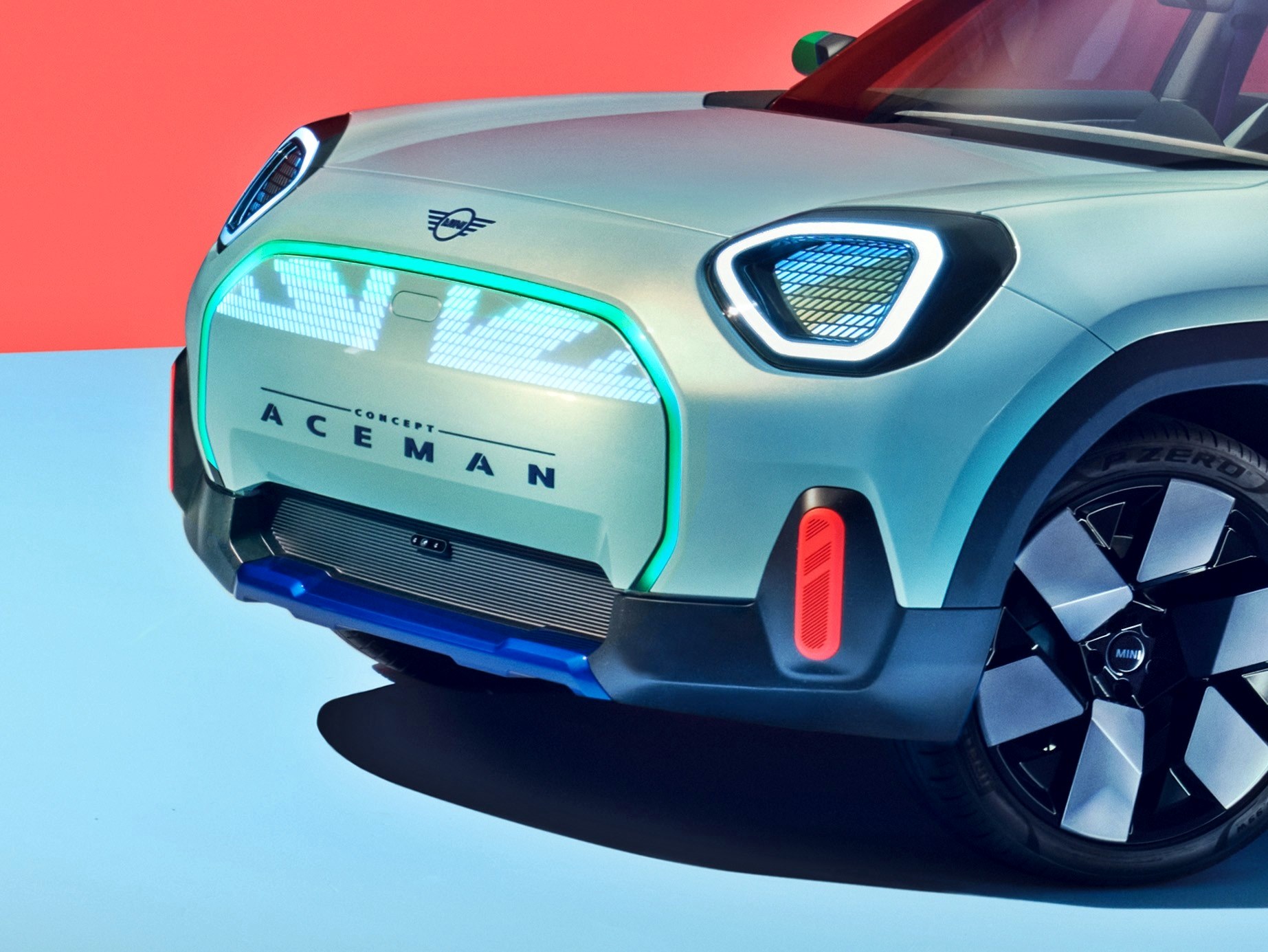 Clear design and definition
A diagonal contour below the A-pillars will spark memories of the striking weld seam of the classic MINI, for those who are familiar with it. Surface modelling and lines create a tapered effect between the front and rear wheel arches that give a dynamic expression to the side view of the Concept Aceman. This intensively accentuates the powerful profile of the rear wheel arches. 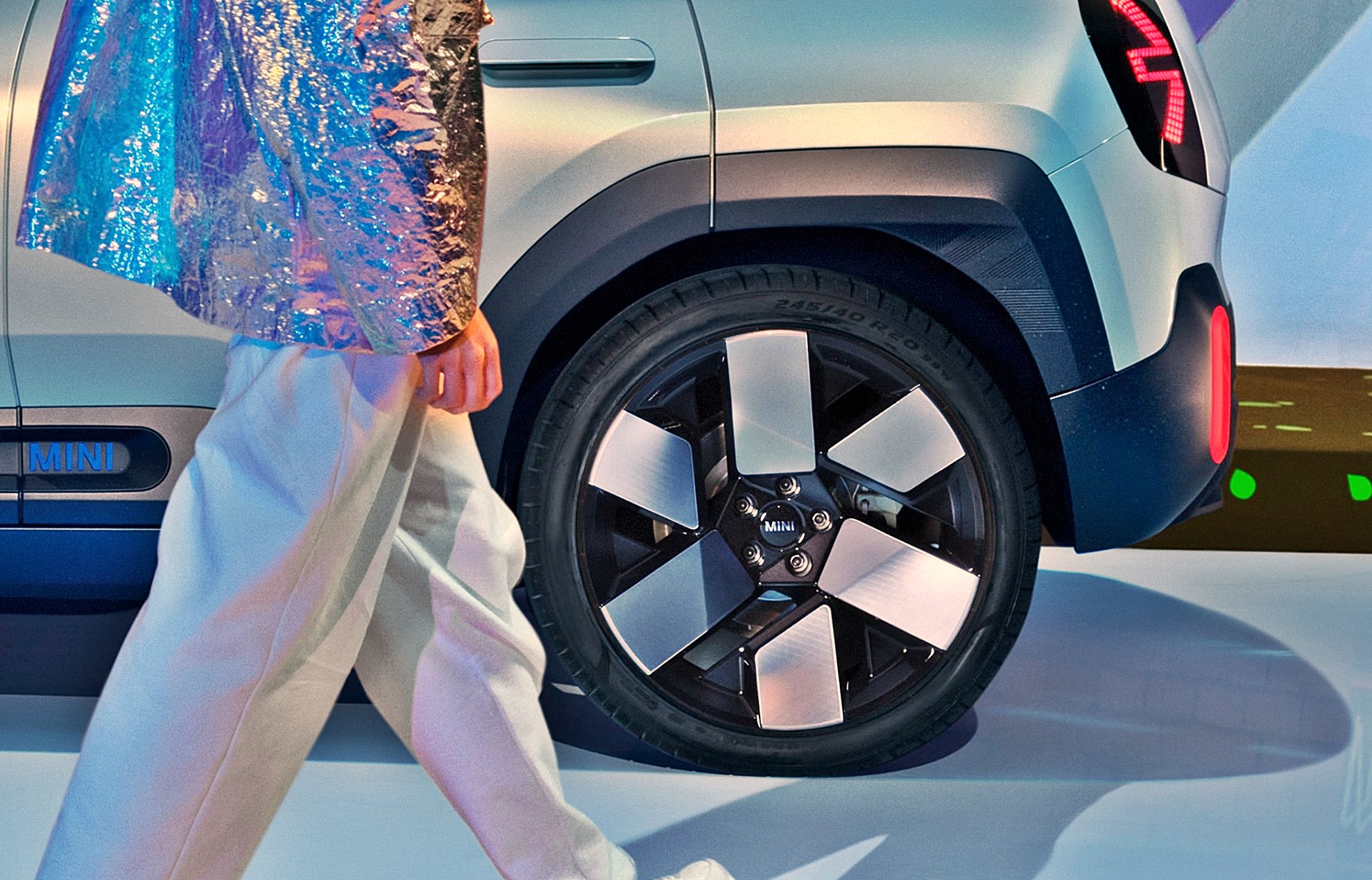 These are further defined by distinctive contour lines, the first of their kind on a MINI. Contour lines provide a lively play of light and shadow in the side view; a dynamic upward movement in the front area, an elongated progression and a steep downward swing. A matt green side skirt, more pronounced in the area of the doors, gives the vehicle an athletic appearance.

A typical MINI twist
A typical MINI twist is the oblong hole outline which is a recurring element with many instances, including the door openers – integrated flush with the surface for the first time in a MINI – as well as the exterior mirror caps and the MINI logo in the lower door section.

The design also features in numerous details in the interior. The equally distinctive Union Jack design, acknowledging the brand’s British roots, is seen in both the rear light graphic and on the robust roof rack. The triangular outline in the centre of each rim gives the spokes visual depth and dynamism, a special graphic feature which is generally only noticed on second glance.

In the rear perspective, there us the cascading contour that MINI is known for, gradually broadening towards the road. The dark roof spoiler and the glass surface of the rear window further reinforce this impression by visually receding into the background. 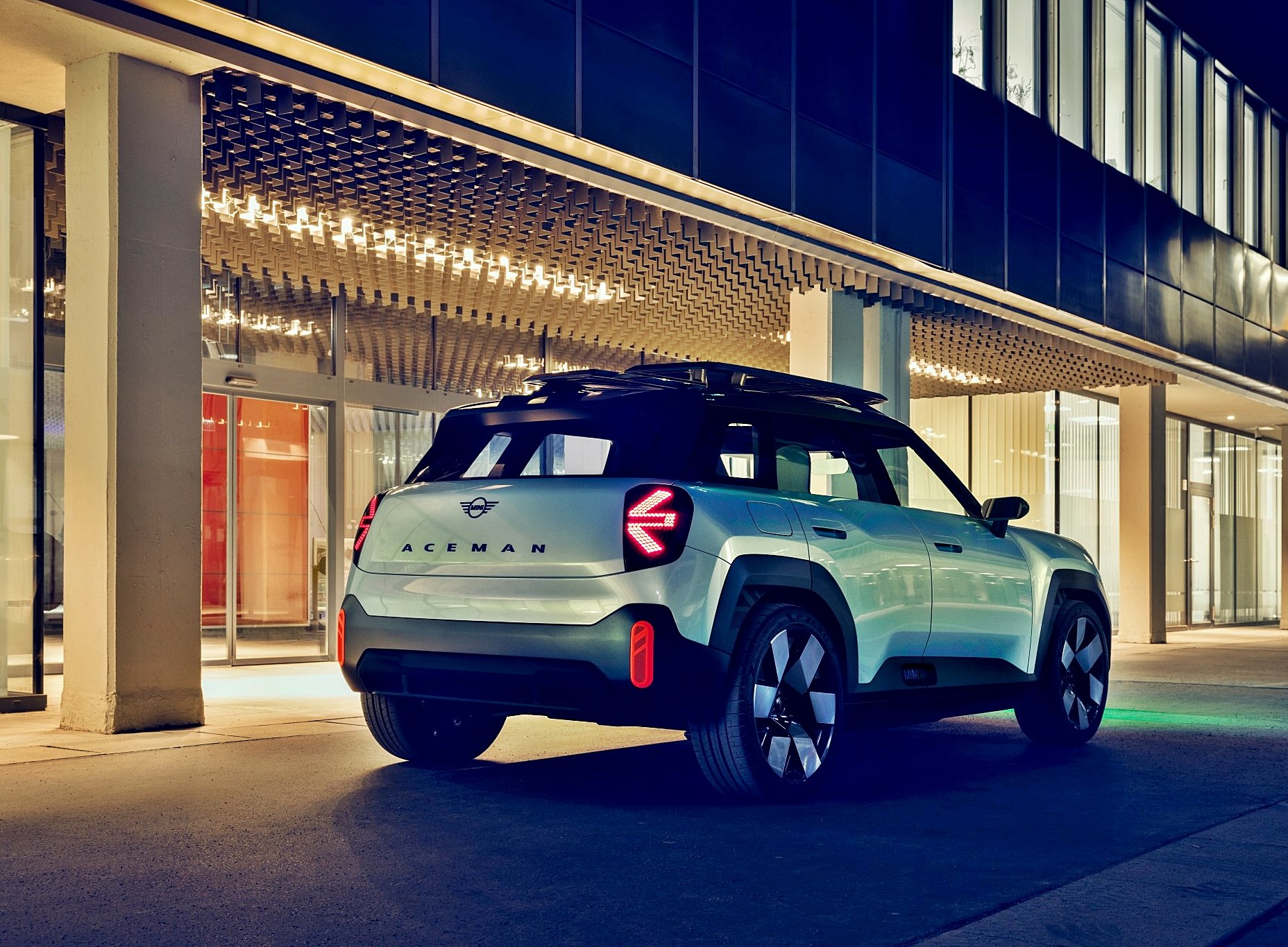 The distinctive vertical MINI rear lights provide a captivating contrast to the clear, horizontal surfaces. They also feature matrix LED units, allowing for different lighting scenarios depending on the situation.

MINImalism redefined
The Concept Aceman interior is also dominated by a reduced design with clear contours and carefully executed details. It combines innovative technology with newly interpreted, yet typical MINI design features. The cockpit is consistently reduced to the bare essentials, just as the designer of the classic MINI had in mind in 1959. Alec Issigonis designed an interior which, in addition to the seats, steering wheel and gear lever, needed nothing more than a central round instrument and toggle switch bar. 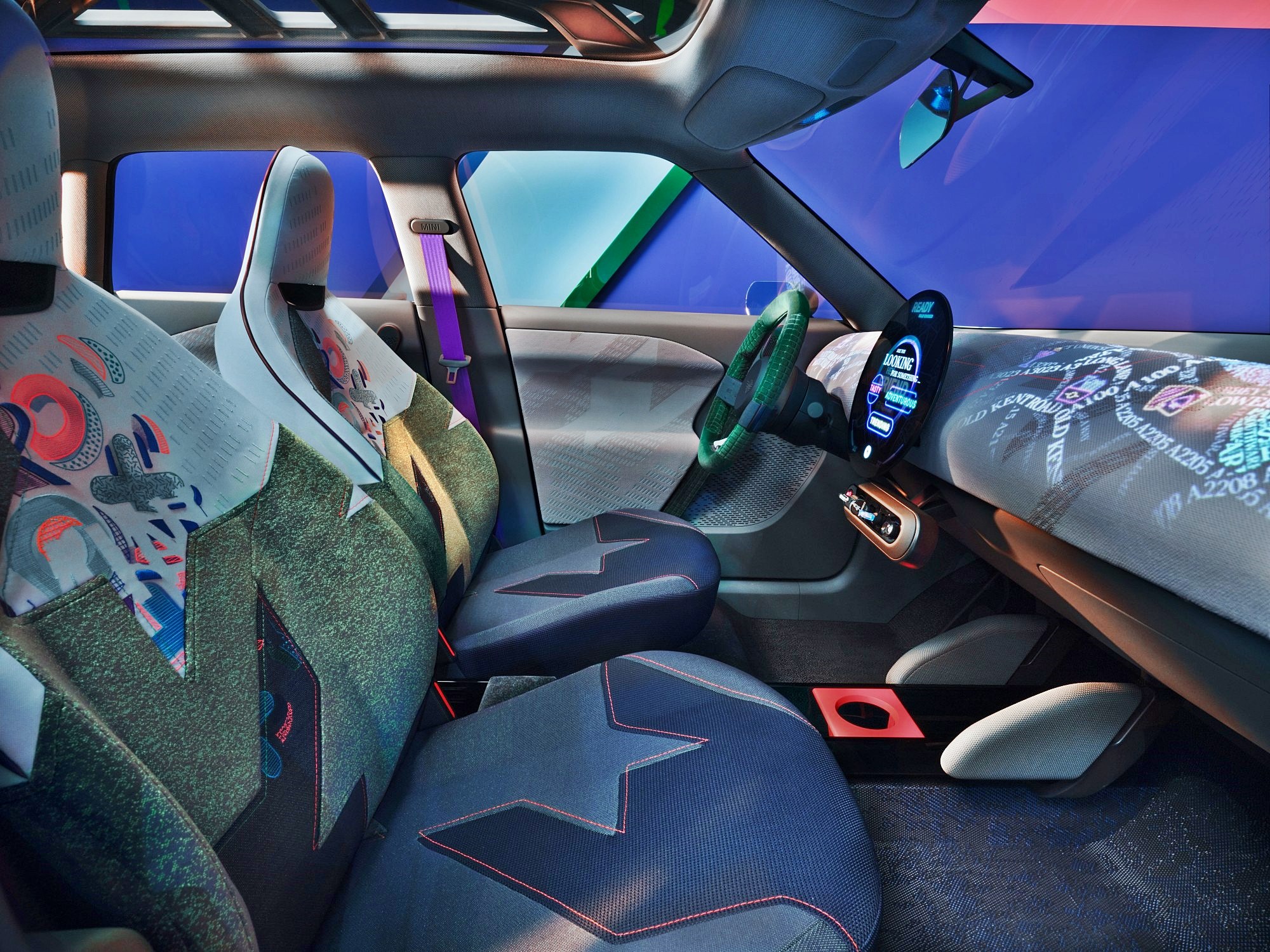 Wide-open and gently curved surfaces in the area of the door panels and the dashboard give a generous feeling of space. The large panoramic glass roof provides an ambience flooded in light. Its glass surface is patterned by the transverse and diagonal struts of the roof rack, whose structure picks up on the Union Jack flag motif, a reminded of the brand’s origins when looking upwards from within. 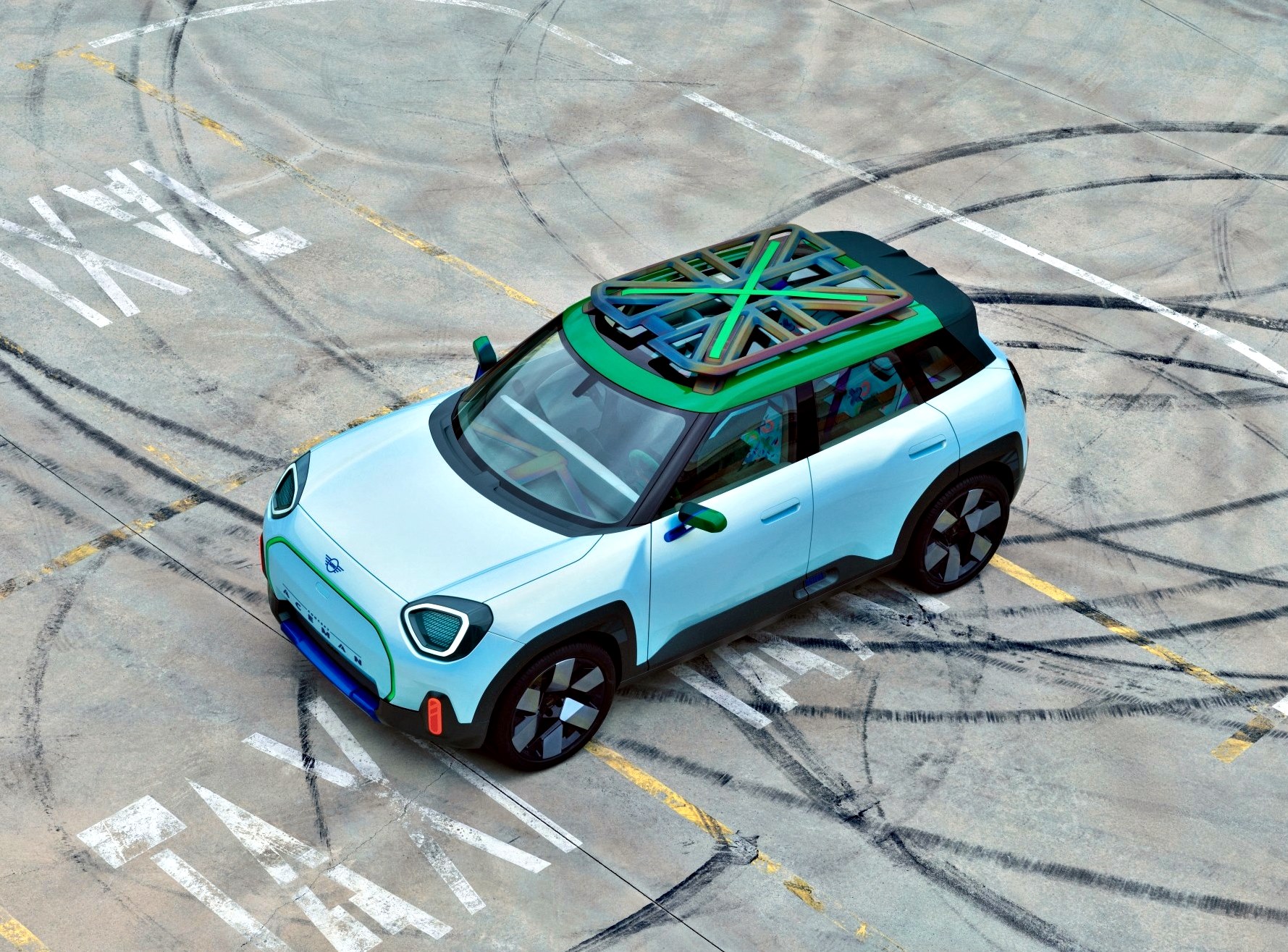 The MINI cockpit
The dashboard is a flat design element styled like a sound bar that extends across the entire width of the interior in front of the driver’s and front passenger’s seats. Its soft knitted textile surfaces create a modern and homey atmosphere. The dashboard is connected via a support structure which, like the roof rack, displays the Union Jack pattern.

The centre interface combines all the functions of the instrument cluster and the on-board monitor as a round OLED display. True to its traditions, a toggle switch bar is set below the large screen. There are both touch controls using state-of-the-art digitalisation and analogue physical switches, depending on the function. 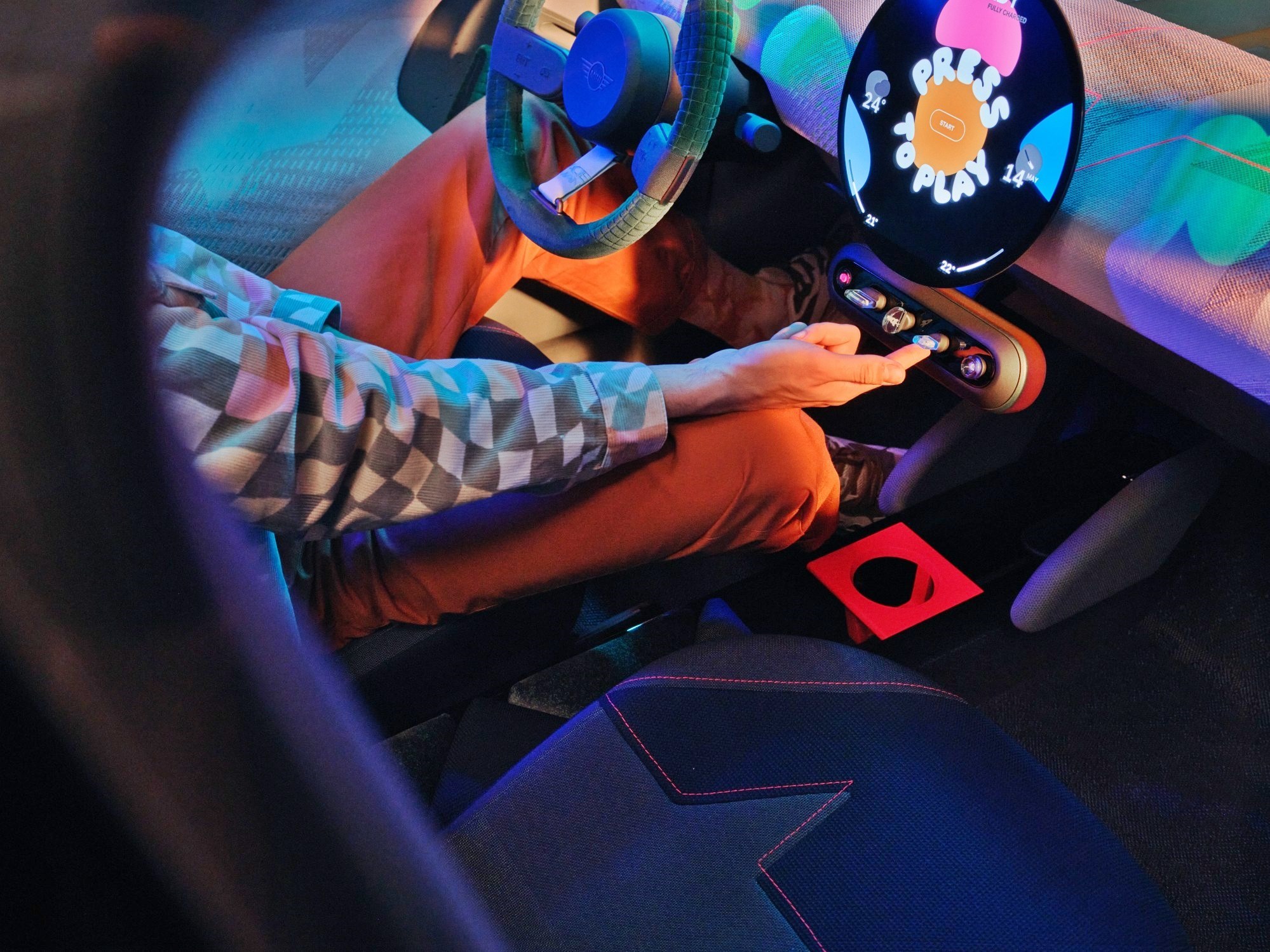 The redesigned toggle switches operate the parking brake, select gears, activate and deactivate the drive, select Experience Modes and adjust the audio system volume. Each toggle is individually designed as a rotary knob or toggle switch for the most intuitive operation.

The distinctive MINI display and operating experience scales new heights with its reinterpretation of the familiar central interface. MINI is the world’s first car manufacturer to present a circular OLED display that takes up the entire surface of the central interface. OLED technology gives the display a particularly high-quality appearance and can display strong contrasts and deep blacks.

The user interface also features a completely new graphic display, a modern layout and attractively designed widgets. The display and control system in the production model will be based on the latest generation of the MINI Operating System which, for the first time, is built on an Android Open-Source Project software stack. This allows for an unprecedented and particularly comprehensive expansion of digital features in the vehicle. 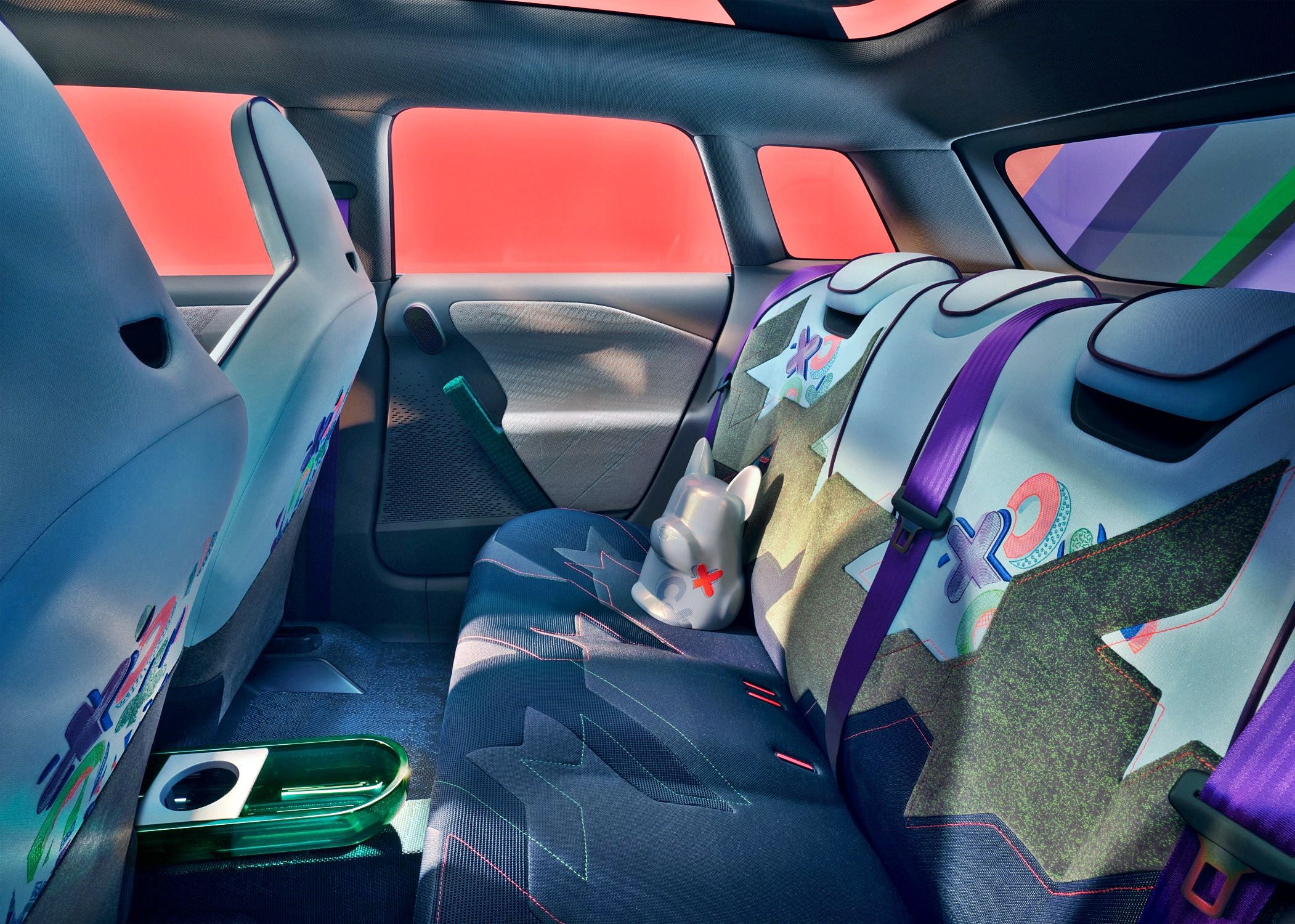 Experience Modes
Innovative Experience Modes generate new possibilities to individualise and personalise the driving experience in the interior. They combine specific displays and colour worlds, which are depicted on the central interface panel and through interior projection, and a coordinated sound stage.

Chrome elements are completely dispensed with – not only in the exterior but also inside. Instead, the dashboard support structure creates its own high-quality, individual highlight in the interior, with its iridescent coating matching the roof support for example. 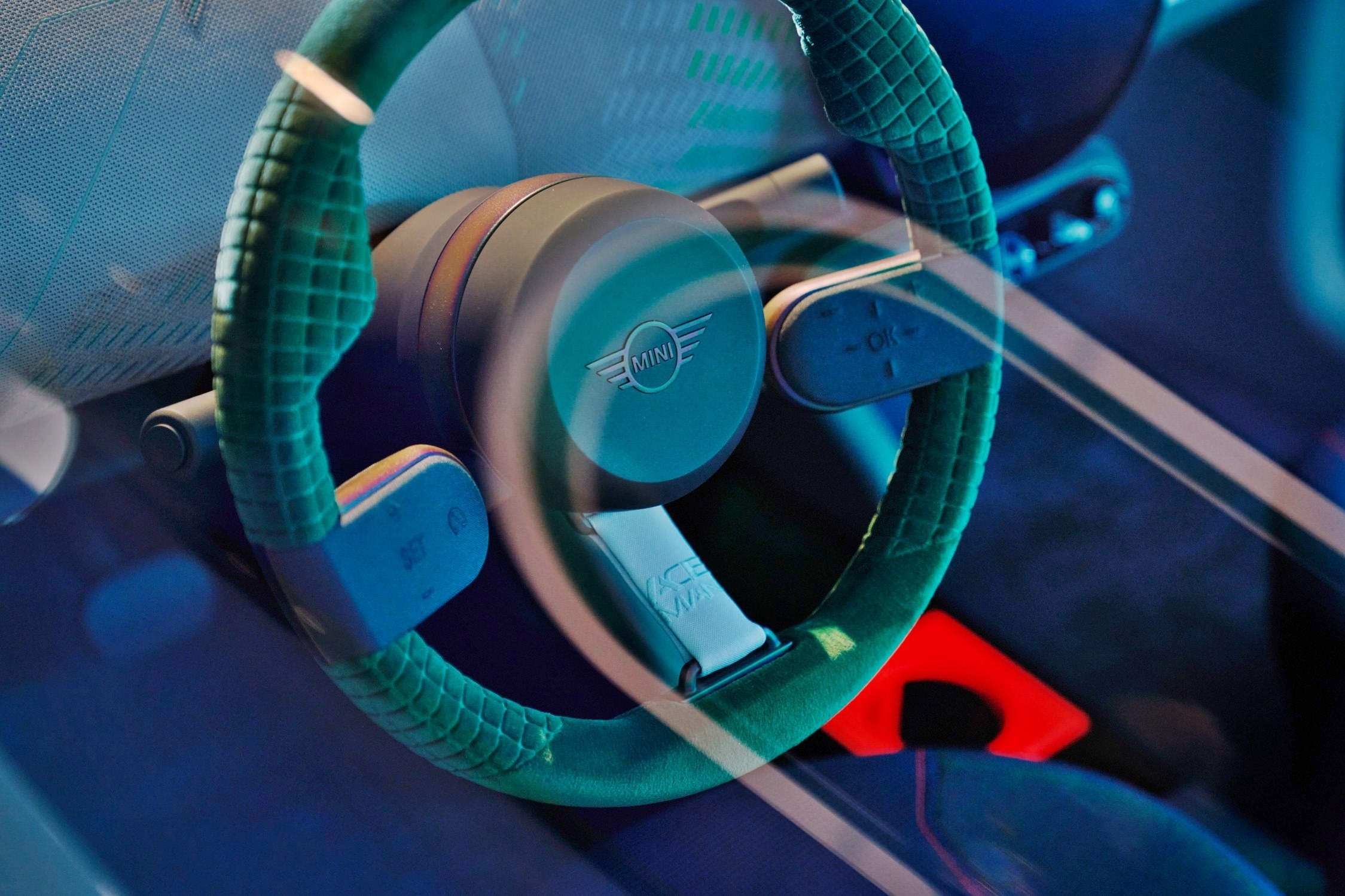 The steering wheel, like the seats, door panels and all other interior surfaces, is leather-free. The steering wheel rim is laminated with dark green velvet velour, giving a particularly pleasant feel. The multifunction buttons are integrated under backlit textile surfaces and the ‘Aceman’ lettering and a robust strap form the 6 o’clock spoke of the steering wheel.

The Concept Aceman will make its first public appearance Gamescom 2022, the world’s largest gaming event to be held in Cologne, Germany next month. 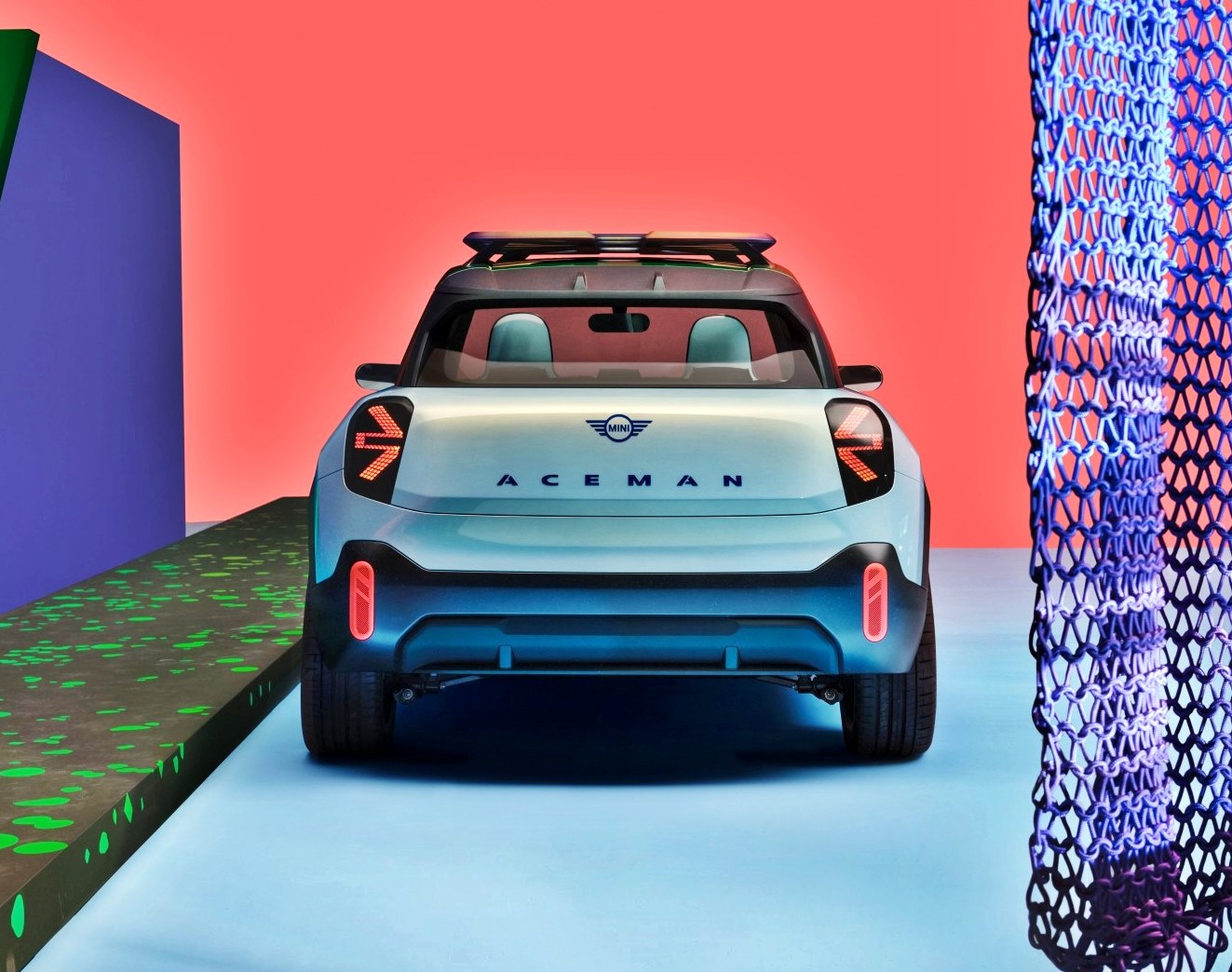 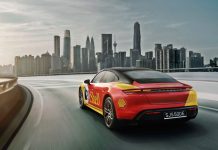