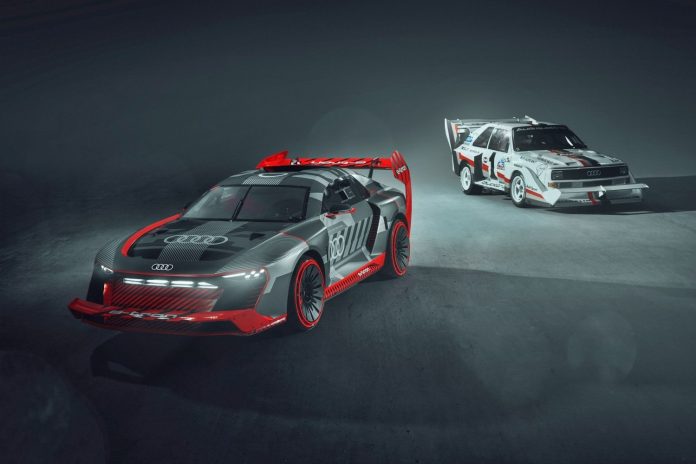 The Audi S1 e-tron quattro Hoonitron to be driven by Ken Block has been completed and will make its North American debut at the Rolex Motorsport Reunion later this month. This is the first time the drift artist is working with Audi after having long associations with Ford and Subaru.

Unlike all previous cars that Block has used, the S1 e-tron quattro – to be used in the next installment of his famous Gymkhana series, ‘Electrikhana’ – does not run on petrol because it has no combustion engine. Instead, it has dual motors powered by electricity, and Block will show that even with electrification, extreme performance is still possible.

Inspiration for the design of the one-off car came from the legendary quattro S1 rallycar that sped up Pikes Peak in record time. The entire development, including the technology, of the S1 Hoonitron was conducted by Audi Sport.

Audi Design was brought in for the styling work only in December 2021. Typically for a project of this magnitude, designers and engineers would spend a year or more just developing the concept. However, in the case of the S1 e-tron quattro Hoonitron, an accelerated timeline of just 4 weeks was targeted at the Audi Sport facility in Germany.

After about a month of labour-intensive work, the S1 Hoonitron was finalized. Block flew over to provide his input and also learn how to drive an all-electric car sideways and in circles. “I’m familiar with a wide variety of cars using internal combustion engines and transmissions, but there were a lot of new things for me to learn. Spinning into a donut at 150 km/h directly from standstill – just using my right foot – was an all-new experience for me! Our work was focused on getting the car and I used to each other. My thanks go to the whole Audi Sport squad for their outstanding teamwork,” he said.

“The S1 e-tron quattro Hoonitron combines a lot of what Audi was already famous for in the 1980s,” added Block. “For instance, the car’s spectacular aerodynamics have now been translated into a totally modern form. I think it’s cool that the Audi designers have been inspired by their own past and uniquely transferred the car’s technologies and appearance into the present.”

The S1 e-tron quattro Hoonitron brings electrification directly to the performance car enthusiast’s doorstep. Besides powerful electric motors, there’s all-wheel drive, a carbonfibre chassis, and incorporation of the full suite of safety standards as dictated by the FIA.

From 1984 to 1987, Walter Rohrl, as a member of the Audi Sport team, drove the original Sport quattro S1 during the Group B era of rallying. Audi had gained an unfair advantage in the early 1980s when it used the quattro all-wheel drive system in its rallycars. The ‘unfair advantage’ propelled the success of the brand in off-road, pavement, and track competitions alike, with significant performance benefits.

Today, the Audi quattro system has evolved with the latest technologies and credentials adapted from the world of motorsports. The modern interpretation, the S1 Hoonitron, serves as a nod to this significant period, while remaining sharply focused on the commitment toward electrification.