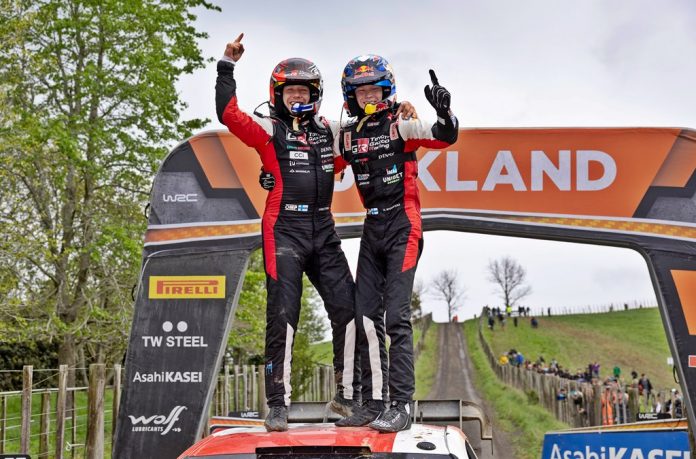 Kalle Rovanpera, 22 years old, has become the youngest ever winner of a World Rally Championship  (WRC) title after winning Rally New Zealand. Driving for the TOYOTA GAZOO Racing World Rally Team with co-driver Jonne Halttunen, Rovanpera is only in his third season of rallying at the top tier of the sport.

The Finnish driver, who father also took part in the WRC before, is more than 5 years younger than the previous record-holder, Colin McRae, when he won the championship in 1995.

“I don’t think about the age too much, but it’s still special to know we could achieve this. It means a lot, to become champion is the only goal I ever had in this sport,” he said.

Rovanpera has had a good run this year, the first year of the WRC’s new hybrid Rally1 regulations. His victory in New Zealand is his sixth of the 2022 WRC with the Toyota GR YARIS Rally1 HYBRID. Having led the standings since winning round 2 in Sweden in February, he can now confirm the title with 2 rounds remaining (in Spain and in Japan).

The WRC title is the eighth won by a Toyota driver and the fourth in as many years. Rovanpera is the first Finnish driver to win the championship for 20 years and the first to do so driving a car built in Finland.

Rovanpera’s speed in difficult weather conditions was central to his victory in New Zealand, where the smooth gravel roads winding through the countryside were used for a WRC round the first time in a decade. After finishing the longest day of the rally on Friday in mixed conditions in fourth overall, he excelled on a soaking wet Saturday on his 22nd birthday to take over the lead and build an advantage of almost half a minute.

Sunday brought further wet weather for the final 4 stages but the Toyota driver managed his lead ahead of the rally-ending Power Stage. Only a top-four time there was needed to secure the 2 extra bonus points he required for the championship. But he nonetheless recorded the fastest time – the seventh occasion he has topped the Power Stage this season.

2021 WRC champion Sebastien Ogier completed a 1-2 finish for the team on his fourth start of the 2022 season. Part of a close 4-way fight for the lead earlier in the rally, he played an important role for his team-mates by taking points away from their championship rivals.

Hyundai driver. Thierry Neuville, who finished fourth saw his title hopes end when his car has gearbox problems on the second day. Casualties on the rally included GR Yaris drivers Elfyn Evans and Takamoto Katsuta as well as M-Sport Ford Puma’s Gus Greensmith who had a dramatic accident.

The incidents that affected the Rally1 frontrunners meant that New Zealander Hayden Paddon finished as high as sixth overall as well as winning the WRC2 category with his Hyundai i20N Rally2.

The 1-2 finish overall, plus the first and third fastest times from the Power Stage, ensures that the team increases its Manufacturers’ championship lead to 81 points, with 104 points left available.

Akio Toyoda, Founder of the TOYOTA GAZOO Racing World Rally Team and President of Toyota Motor Corporation, said: “A journalist asked me the other day why Kalle is this strong, and my prompt answer was “because he loves donuts”! I think those words came out because I remember very well that Kalle did donuts during one of the Power Stages before, and I believe he is strong because he always enjoys driving. I really thank him for driving and enjoying the GR YARIS Rally1 HYBRID and becoming World Champion. I hope we can have a place to celebrate somewhere and enjoy donuts together.”