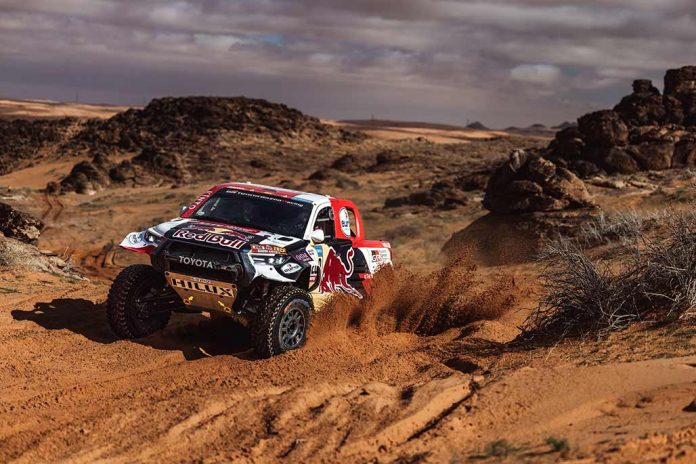 Qatar’s Nasser Al-Attiyah and his French co-driver, Mathieu Baumel, successfully defended the Dakar title they won for TOYOTA GAZOO Racing (TGR) in 2022 when they brought their GR DKR Hilux T1+ over the finish line of the final stage of Dakar 2023 with a winning margin of 1 hour 20 minutes 49 seconds.

Although they had lost almost 6 minutes to the final stage leaders, they had already built up a comfortable lead from stage 3 to be able to take overall victory. For Nasser, it’s a fifth win in the event, while Mathieu’s tally is now 4 victories. The pair have won 3 times for Toyota, with the latest victories coming in a back-to-back. Nasser’s two earliest wins were win Volkswagen (2011) and MINI (2015)

Instead, it was Bahrain Raid Xtreme (BRX) which grabbed second place after a determined fight back from stage 3 onwards by Sebastien Loeb/Fabian Lurquin. Seven stage victories from 14 stages was certainly a massive step forward for the team in only its third attempt at the event. On June 15, 2020 the Kingdom of Bahrain’s plans for launching the team were revealed. BRX was founded by the Kingdom of Bahrain’s sovereign wealth fund Mumtalakat Holding Company, and has a partnership with the British team Prodrive which developed the cars and manages the team.

Third place was won by Overdrive Racing which also used the Toyota Hilux based rallycar. Brazilian Lucas Moraes performed impressively on his debut in the Dakar Rally, partnered with Timo Gottschalk. In fact, he had risen to as high as second in ranking.

Toyota dominated the Dakar 2023 results, with the works TGR crews finishing 1st, 4th and 5th, and Overdrive Racing’s Hilux T1+ in third. In terms of the 2023 World Rally-Raid Championship, of which the Dakar Rally was the opening round, Nasser and Mathieu amassed a total of 85 points. This means they trail the leaders by just 2 points after Round 1 of the 5-round championship. Toyota is in 2nd place in the Manufacturers’ championship, just a single point behind the leaders.

Audi, which entered its electrically-powered RS Q e-tron for the second time, was hoping for a win this time. Things had looked very promising as Audi drivers had led the rally across the Saudi Arabian desert with the prototype rallycar for 3 days. Over the 15 days of the event, the team would collect a total of 14 podium results but a series of punctures, accident-related, as well as a massive loss of time for Mattias Ekstrom/Emil Bergkvist prevented a better result than 14th place.

The Audi team accepted that bad luck had prevented it from doing better although the strong performances in the early stages provided some consolation and encouragement. “A podium was our goal; however, from tyre and chassis damage when encountering obstacles on the rough tracks to the accidents, we also experienced many disappointments. Now we are thoroughly working through all aspects and will analyze all areas,” said Rolf Michl, Head of Motorsport at Audi.

Audi aims to be the first carmaker to win the Dakar Rally with an electrically-powered car. With the RS Q e-tron, it is using an innovative charging concept. On board of the car is the highly efficient TFSI engine from the DTM. It is part of an energy-converter that charges the high-voltage battery while driving. Since the combustion engine is operated in the particularly efficient range of between 4,500 and 6,000 rpm, the specific consumption is well below 200 grams per kWh.

A third motor-generator unit (MGU) is part of the energy converter and serves to recharge the high-voltage battery while driving. In addition, energy is recuperated during braking. The battery weighs about 370 kgs and has a capacity of around 50 kWh. The maximum system power of the e-drivetrain is 500 kW. The electric drivetrain offers many advantages. The electric motors can be controlled extremely precisely and can thus ensure good drivability. In addition, braking energy can be recovered. There may still be emissions from the TSI engine, but certainly, the car would have the lowest emissions of all the vehicles that took part in the Dakar Rally.

In the Trucks category, IVECO’s new teams pushed hard over the 8,500 km route to win the class. Janus van Kasteren and Martin van den Brink finished first and third, with a private team from MM Technology splitting them.