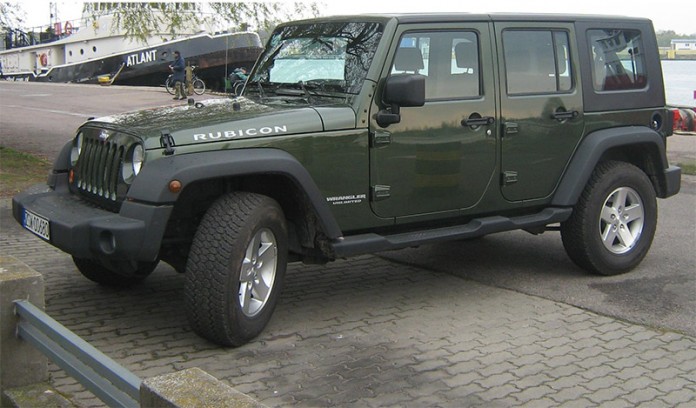 Many SUVs in the market claim to be off-roaders, but not many can quite pull it off like the Wrangler.

There are many SUVs in our market which claim to have so-called off-road abilities, but how rugged are these vehicles in reality? More often than not, these vehicles are shown crossing a stream, or driving through the desert to promote their capabilities, and that’s it.

But what if someone is looking for a vehicle that needs to traverse the roughest of terrains on a daily basis, and even need to drive something with floating axles and independent suspensions?

Yes, pickup trucks are available and they can be modified to suit our off-roading needs but truth be told, it is not easy to add these modifications as expertise in this field is very scarce and boy, are they expensive!

So, the best thing to do would be purchasing a vehicle that is purposefully built to tackle the worst of conditions without breaking a sweat, such as the Jeep Wrangler Rubicon which we got our hands on recently.

Having been around for more than seven decades, Jeeps are so tough that they have even won wars, and the reputation for being tough still remains.

Since the glory days of the Willy in the 1940s, there have been countless variations on the classic, and the model that you’re looking at now is one of the most recent – the 2015 Jeep Wrangler Rubicon, which is the top of the line Wrangler model in the stable today.

Since the 2015 model is still being built on the JK platform that made its debut in 2007, the Wrangler’s design has not changed much over the past eight years. From the lights, the bumper design, to the door, the Jeep still looks the same. But that doesn’t mean that there have not been any improvements at all. New colours and wheel designs have been introduced every time the Wrangler went through a facelift.

Things have changed under the hood as well. The previous generation’s 4.0-litre V6 engine by AMC has been replaced by Mopar’s 3.6-litre V6 Pentastar engine which kicks out 282hp and 347Nm of peak torque. The engine is paired to a five-speed automatic transmission. In case you’re wondering, no, the Wrangler does not come as a manual in Malaysia.

Since the Rubicon is the top of the line variant of the Jeep Wrangler, it comes packed with goodies. Outside, the model gets the Rock-Trac 4WD system, a front sway bar disconnect system, Dana 44 heavy-duty axles, monotube shocks, Electronic Stability Control (ESC), Hill Start Assist (HSA),  skid plates for the fuel tank, a Premium Sunrider soft top, and 17-inch aluminium wheels.

Just by looking at the Wrangler Rubicon and the features that come with it, it’s obvious that Jeep made this vehicle with one thing in mind – to tackle the roughest and toughest of surfaces. In fact, even the Rubicon’s cabin is built with sturdy material. Regardless of whether we laid our hands on the steering wheel, the dashboard, glove compartment, or the seats, everything felt sturdy.

From the dashboard on the Rubicon itself, we could lock the front and rear differentials. Normally, one would have to spend thousands of Ringgit just buying the parts needed to perform as well as the Rubicon off-road.

Also from the dash, we were able to disconnect the front sway bar. Normally, one would have to get out of the vehicle to do it, but in the Rubicon, it was nice to know that much greater front wheel articulation was just a touch of a button away.

If you’re interested in spending a lot of time off-road, there’s hardly an argument not to get the Rubicon, because if you opt for a Japanese 4×4 that is most likely much cheaper, you’re eventually going to buy a ton of equipment on top of the truck itself, pay more for it, and still not get the capabilities that the Rubicon offers.

For instance, the Rubicon comes with Dana 44 front and rear axles, which are among the toughest in the world, as opposed to the lighter duty Dana 30 on the lesser trims. And then, there is the convenience factor.

On the road, the Rubicon behaved like a typical top-heavy SUV. Noise, vibration, and harshness (NVH) level was decent for a vehicle in its class. Comfort wise, we had no complains at all as seats were comfortable, and provided good support, regardless of the shape and size of the occupants.

On top of that, they were clad in leather. Adding to the experience was the impressive audio system with Alpine speakers. The only setback is that the Rubicon is a “shorty” (two-door variant). So, space in the rear comes at a premium. Besides that, the Rubicon was an absolute joy to be in.