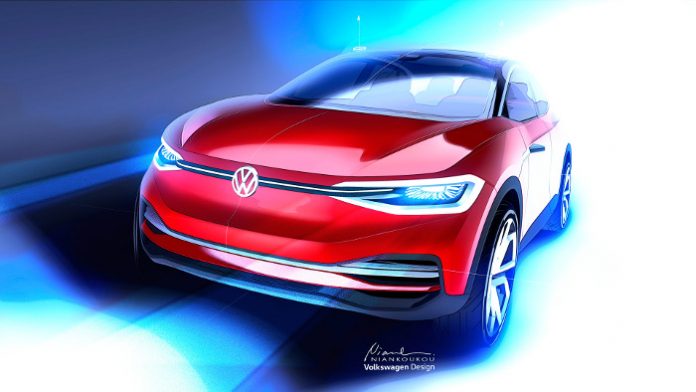 Volkswagen will be revealing a concept vehicle at the International Motor Show (IAA) in Frankfurt that will showcase the automaker’s advancement in EV technology. Called the I.D. Crozz, the SUV crossover is built on VW’s all-electric architecture with the end goal of creating a clean and powerful design.

Based on the images, the vehicle seems to sport Volkswagen’s current design philosophy that has been retouched to seem more futuristic. The wide bonnet that seems to stretch to the entire width of the car belnds well with the front fenders.

It’s basically a mash of several different Volkswagen cars including a hint of XL1 to produce one that is a culmination of their best parts. The interior features a bright red body colour that is contrasted by high-gloss black for a portion of the hood and entire roof.

Despite sporting car-like looks, the crossover SUV will feature a high tech interior and a lithium-ion battery pack that is fitted under the cabin floor. This will allow for less cluttered switch-gear and more cabin space for all occupants.

It will have an open space concept that resembles a mini-lounge where four adults can sit and converse comfortably. Little less is known at the moment because Volkswagen has decided to save the juicy details for the actual reveal date.

Take a look that the video below and let us know what you think of the upcoming VW concept and whether it will be able to shape the EV Volkswagen of tomorrow.