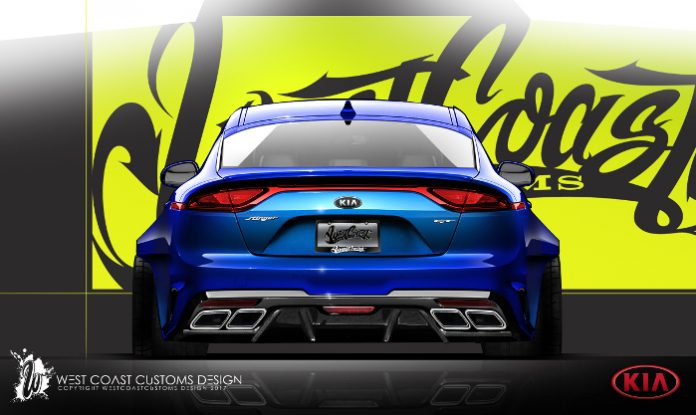 Kia has teamed up with world renowned aftermarket modification expert, West Coast Customs, to turn the Korean automaker’s Stinger GT into something special. The car will be put on display at the upcoming SEMA motorshow that will take place on the 31st of October.

According to a statement by the automaker, the car will receive extensive upgrades that include design and performance modifications. The Stinger GT will spearhead Kia’s charge into the grand tourer segment of the market.

It’s striking good looks, rear-wheel drive platform, decent performance figures and practical layout may play a part in swaying would-be continental car owners toward the Korean brand. But the SEMA showcar, will build upon the strengths of the base model to showcase the possibilities and configuration options that are available.

Working together with West Coast Customs, Kia has revealed that the showcar will get lowered front and rear suspensions, a gloss black finish for its signature front grille, stylistic yet functional carbon-fibre aero kit and widebody fender flares.

Based on the teaser image that was revealed, it has been made apparent that West Coast Customs has lived up to its reputation of being one of the best at making good car even better. A custom made rear diffuser and squared-off quad exhaust tips provide car with a more prominent sporty presence.

The same can be said of the 21-inch forged wheels that sit perfectly snug within the custom made bodykit. However, the cambered stance may not be to everybody’s taste, especially when it comes to practicality, but as a show car, it definitely earns points for uniqueness.

There will probably be a number of other features will be added to the car before it heads to SEMA, but Kia has not divulged much else regarding details and specifications of the car. That said, all will probably be revealed as we approach the launch date.