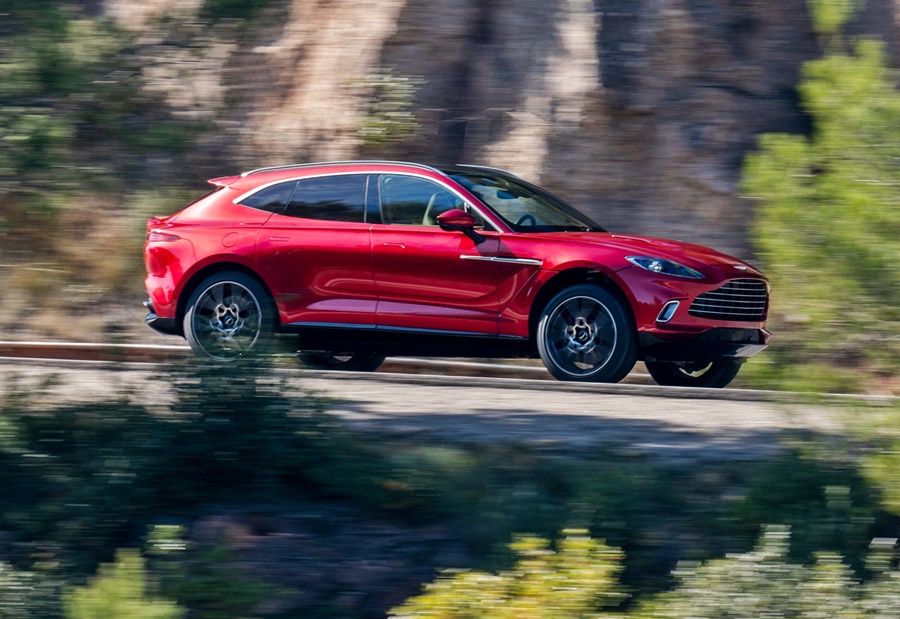 Aston Martin officially joins the SUV bandwagon today with the all-new DBX – the first SUV model in its 106-year history. It’s the culmination of a development programme that began when Dr. Andy Palmer joined Aston Martin Lagonda from Nissan as President & Group CEO in 2014 and made a SUV project one of the company’s priorities.

When you think back 5 years ago, there were no true benchmarks for the Aston Martin SUV to observe. It was a segment previously unexplored and bringing both the versatility and indulgence expected of a luxury SUV with sportscar levels was a bold new challenge for the company. 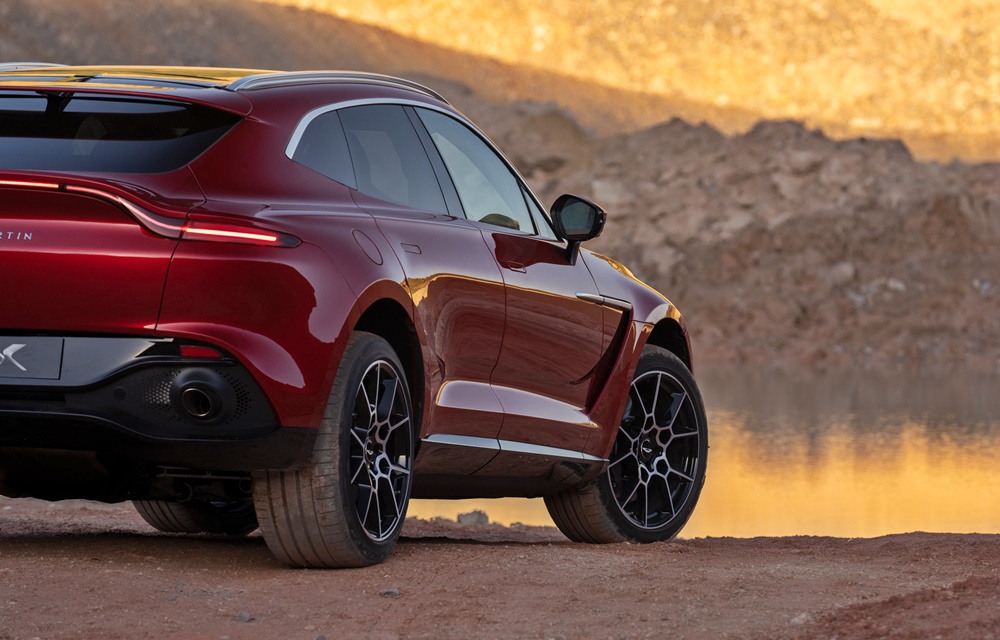 “DBX also marks a key moment in the delivery of the third and final phase of our Second Century Plan, not only representing the promised expansion of our portfolio but also signalling the start of production at Aston Martin’s second manufacturing plant,” said Dr. Palmer. “We have both delivered this model through our expertise, but also by garnering invaluable experience and knowledge from external counsel, including our Female Advisory Board. This is a real landmark for this great British brand, and I promise that DBX will reward all who experience it in their everyday lives.”

“DBX is a car that will give many people their first experience of Aston Martin ownership.
As such, it needed to be true to the core values established in our sportscars,
while also providing the lifestyle versatility expected of a luxury SUV.”

All-new platform, sportscar structure
The foundation of the DBX is a new dedicated SUV platform, something rarely seen across the sector. By taking such an approach, all departments within Aston Martin could innovate and push the boundaries of what British design and engineering can create, resulting in a truly remarkable product that has ‘British-ness’.

Utilising bonded aluminium, a construction method Aston Martin has refined through the development of its sportscars, the body structure is both very light and incredibly stiff, with an overall kerb weight of 2,245 kgs. The exceptional stiffness inherent in the design of the new platform has also enabled the DBX to achieve exceptional dynamics both on and off-road. 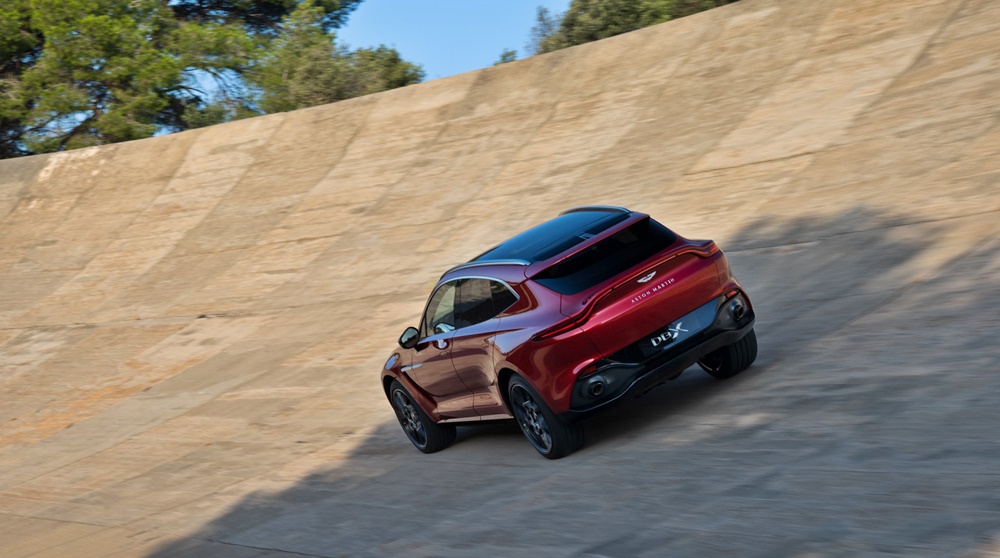 Adaptive triple volume air suspension has been combined with the latest 48V electric anti-roll control system (eARC) and electronic adaptive dampers to provide the new SUV with a huge breadth of ability. With its capacity to raise the ride height by 45 mm or lower it by 50 mm, the air suspension gives the capability to tackle a wide range of terrain.

The eARC can limit the SUV’s body roll for handling that is much more akin to that of a sportscar than an SUV. This sophisticated system of adaptive air suspension, dampers and eARC allows for maximum ride comfort when transporting up to 5 occupants and their luggage, while maintaining a highly responsive and engaging dynamic capability. 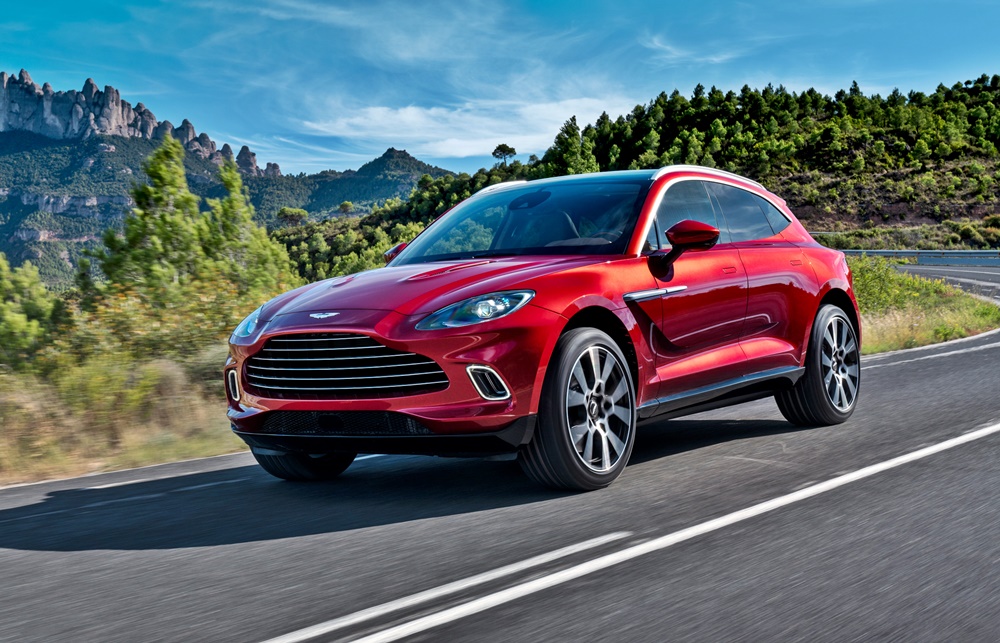 Powered by a new version of the 550 ps/770 Nm 4-litre, twin-turbocharged V8 engine also used in DB11 and Vantage, the DBX has a sound character that is unquestionably Aston Martin. The active exhaust system ensures this is a luxury SUV that can sound refined one moment and exhilarating the next. But the soundtrack is not everything and to enhance fuel economy, the engine has cylinder deactivation. Yet it can also propel the DBX from 0 to 100 km/h in a claimed 4.5 seconds with a top speed of 290 km/h.

Transmitting this power and torque to the ground is a 9-speed torque convertor automatic gearbox, allied to an all-wheel drive system with active differentials. The drivetrain features an active central differential and an electronic rear limited slip differential (eDiff). This allows the torque to be moved precisely both fore and aft in the vehicle and also across the rear axle. 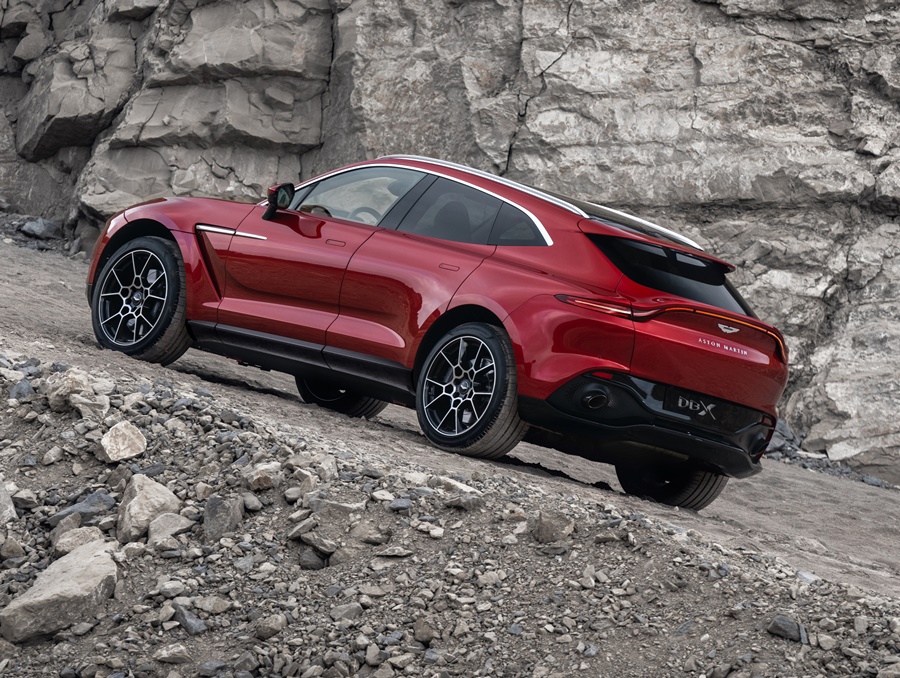 First 5-seater Aston Martin
Aston Martin’s first ever full-size 5-seat model has been designed to be extremely adaptable to a wide variety of lifestyle needs and owners. It can accommodate the world’s 99th percentile male and 5th percentile female, which covers a broad range of heights. The use of sportscar seat packaging in the front not only provides the driver with exceptional support and long-distance driving comfort, but also provides knee and footwell clearance for those sitting behind. 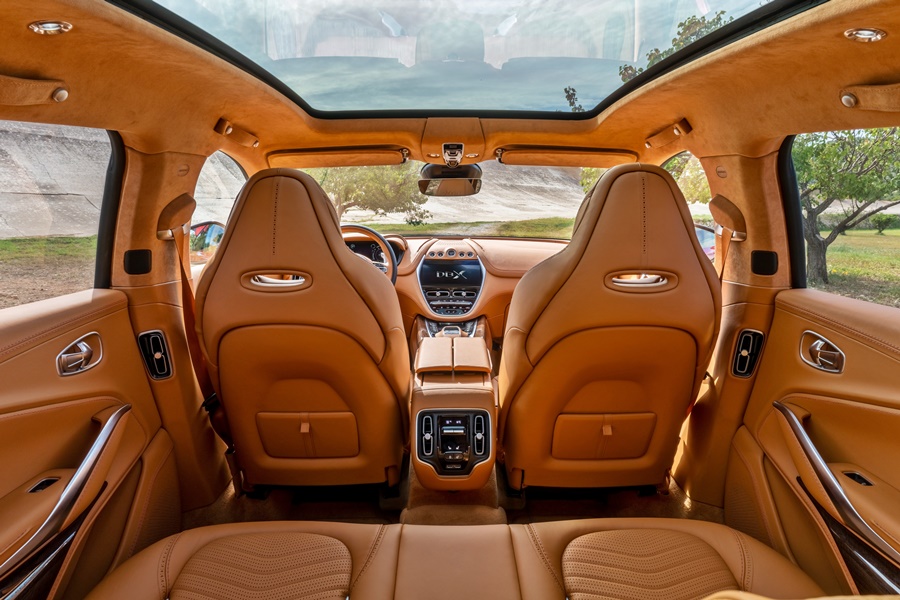 Small touches throughout, including separate central armrests, glovebox design and the ergonomic positioning of the car’s key control systems, have been guided carefully by the input of the brand’s Female Advisory Board, dealership feedback and a variety of private focus groups held worldwide. Not limited to this area, the guidance provided has been key to the success of DBX’s overall design.

With 632 litres of boot space and 40:20:40 split folding rear seats, the DBX possesses all the flexible load capacity expected of an SUV with class-leading interior space. The load space offers a practical and cleanly designed space. A narrow load sill and broad aperture maximises the practicality for a variety of luggage, such as suitcases, golf bags and ski equipment. 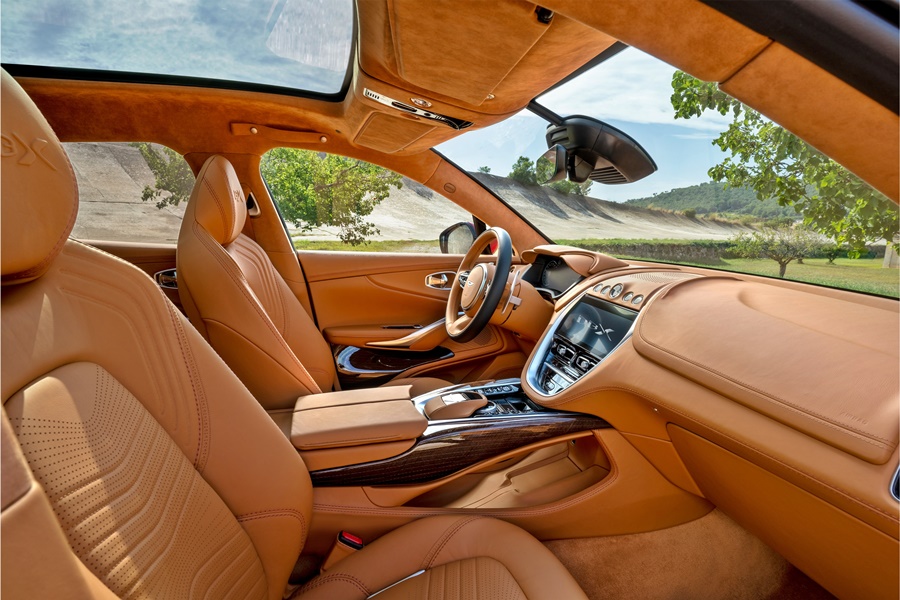 An industry first, both the headlining and electric roof blind are available in a luxurious Alcantara finish, providing a harmonious design, light obscuration and solar attenuation without compromising headroom. Throughout the cabin, DBX maintains an authenticity of materials, with judicious use of metal, glass and wood throughout the cabin.

Another design highlight includes the elegantly crafted bridged centre console allowing for both flexible storage below and a beautiful, architectural centrepiece. This feature keeps valuables close to hand while not occupying the passenger seat and away from dirt on the car’s floor mats. As part of ‘Q by Aston Martin’ – Aston Martin’s personalisation service – optional features of this centre console can be machined from a solid piece of wood, such as Walnut, for added tactility. 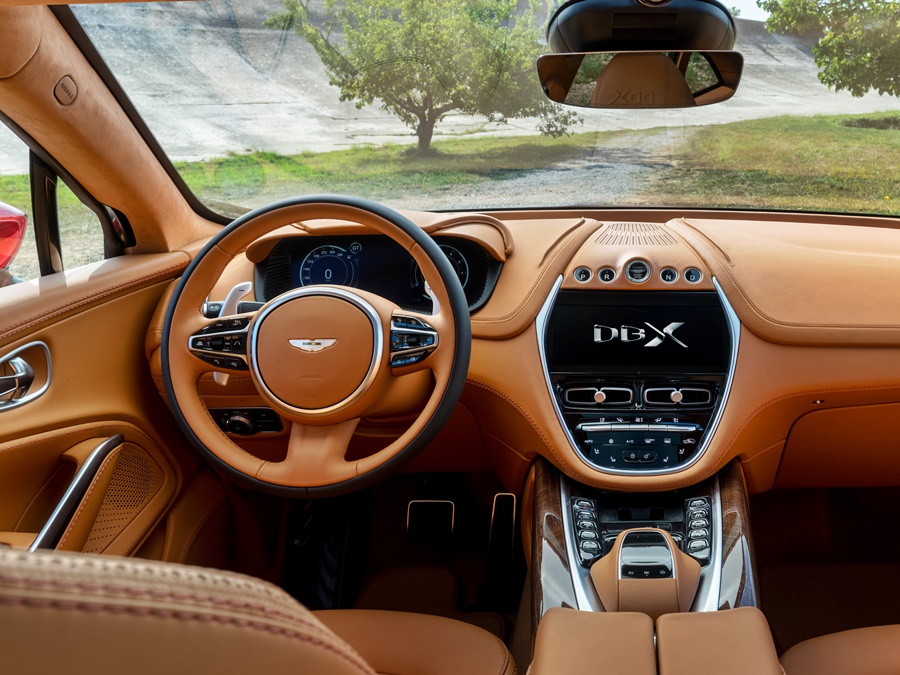 Framed by these materials is an abundance of technology. A 10.25-inch TFT screen sits elegantly flush in the centre console, while a huge 12.3-inch TFT screen provides a wealth of information to the driver. Apple CarPlay comes as standard (will DBX owners used only iPhones?), as does a 360-degree camera system and ambient lighting that offers 64 different colours in two zones.

Sportscar style with SUV functionality
The DBX’s exterior combines the elegance of Aston Martin’s sportscars with the functional style of SUVs. However, the big story is about the aerodynamics which were an important consideration within the design process. 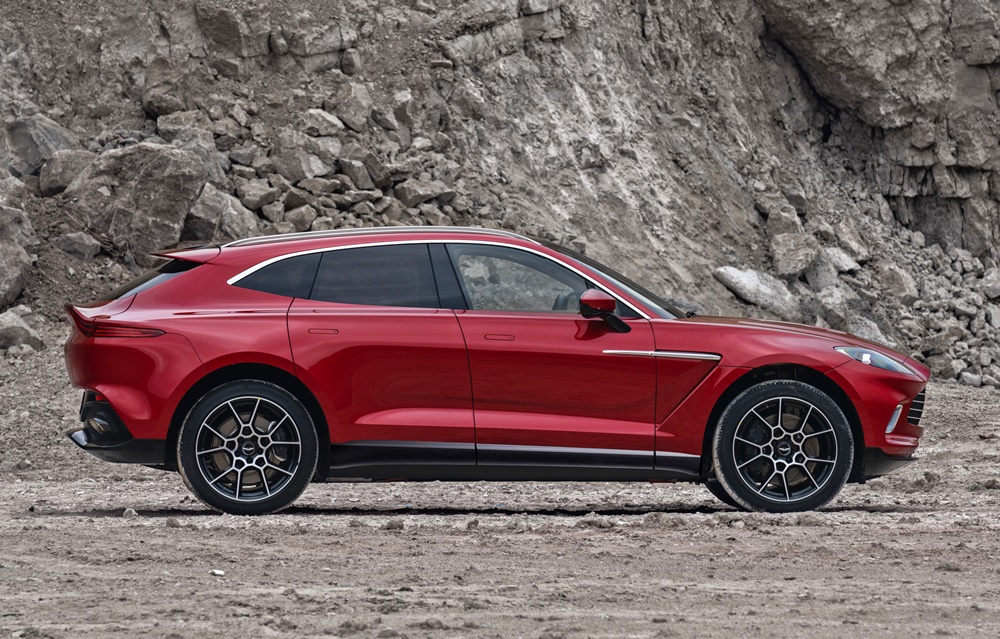 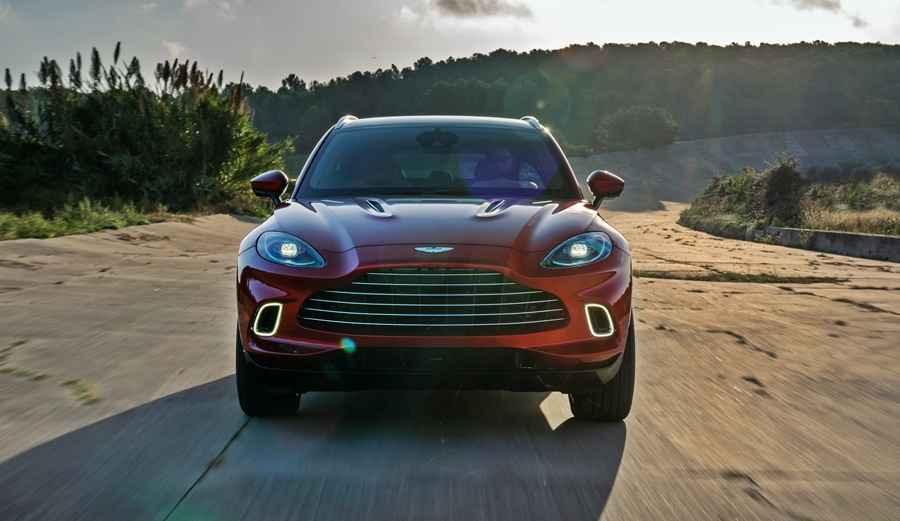 At the car’s front, the daytime running lights (DRLs) have an integrated aerodynamic duct, which channels air through the front wheel arches and along the side, helping to reduce both drag and lift while also cooling the brakes. Air flows cleanly over the roof, through the rear wing, over the rear window and on to the rear flip. This unique approach and design detail allows the rear screen to self-clear on the move. Aerodynamic design has also played a key part in passenger comfort because as one of only a few companies using computational aeroacoustics technology, Aston Martin’s engineers have been able to keep cabin noise to a minimum at speed. 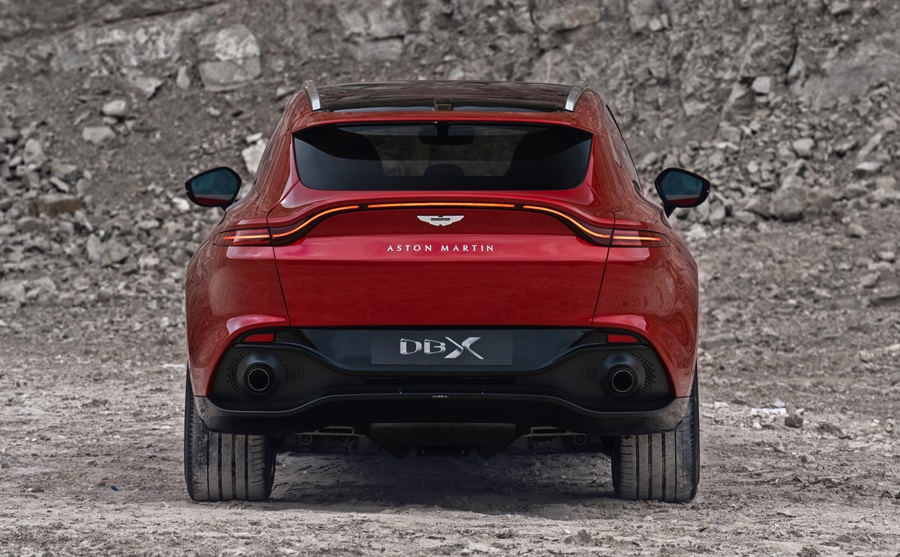 Further adding to the desirability of DBX, the first 500 owners of this landmark model will benefit from an exclusive ‘1913 Package’. Fitted with a unique fender badge, sill plaques and an inspection plaque detailing its limited build-run; each of these first examples will be personally endorsed and inspected by Dr. Palmer. In addition, each customer will also receive a unique build-book signed by both Aston Martin’s CEO & Chief Creative Officer Marek Reichman and an invitation to a regionally hosted Waldorf Astoria celebration cocktail party, hosted by a member of the Aston Martin Lagonda executive team.

As for the Malaysian market, Aston Martin Kuala Lumpur is ready to accept bookings. The DBX will be priced from RM798,000.00 (excluding duties). For more information or to find out where to send your deposit cheque, call 03 2163 1196. 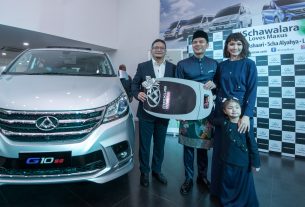 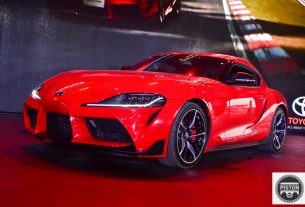 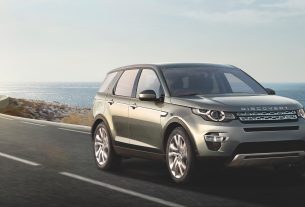