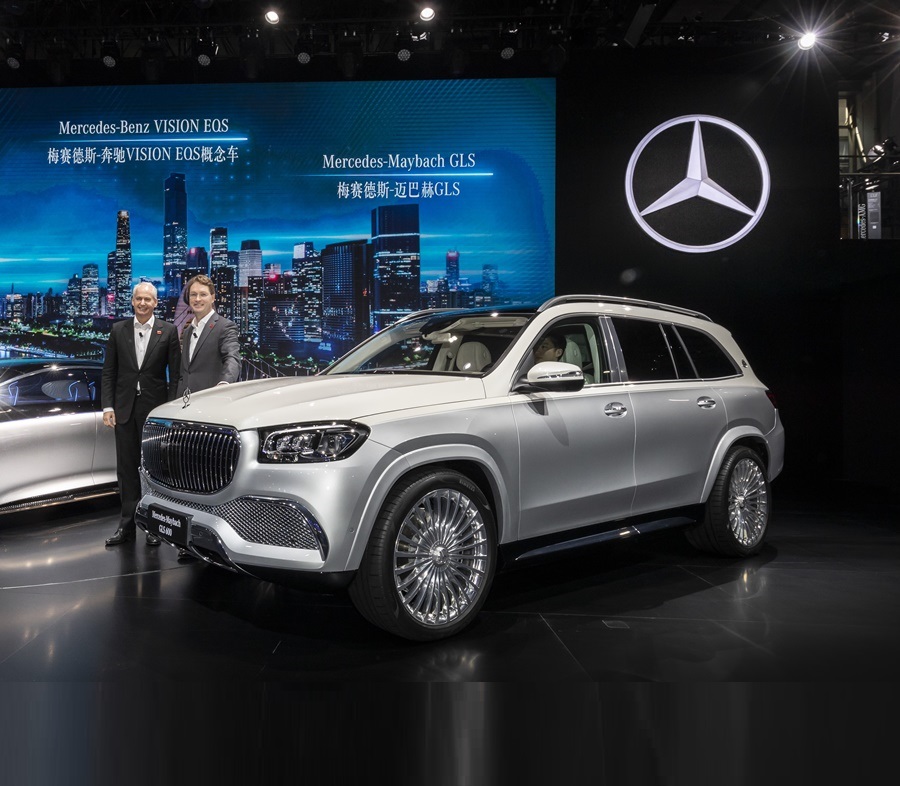 The Maybach brand is 110 years old and although acquired by Mercedes-Benz in 1960, it remained dormant till the late 1990s when the carmaker decided to use it for an ultra luxury brand in its portfolio. It was an attempt to offer something comparable at the Rolls-Royce level but somehow, the strategy didn’t work and after poor response, Mercedes-Benz removed Maybach as a standalone brand after 2012.

Then in 2014, the company took a new approach, still aiming at the Bentley and Rolls-Royce, and created the Mercedes-Maybach sub-brand. It enlarged the S-Class (W222) considerably and gave it all the luxury that its rivals could offer. Interestingly, besides Germany, Mercedes-Benz has also been assembling Mercedes-Maybach models in India since 2015. To date, more than 45,000 units have been sold worldwide. 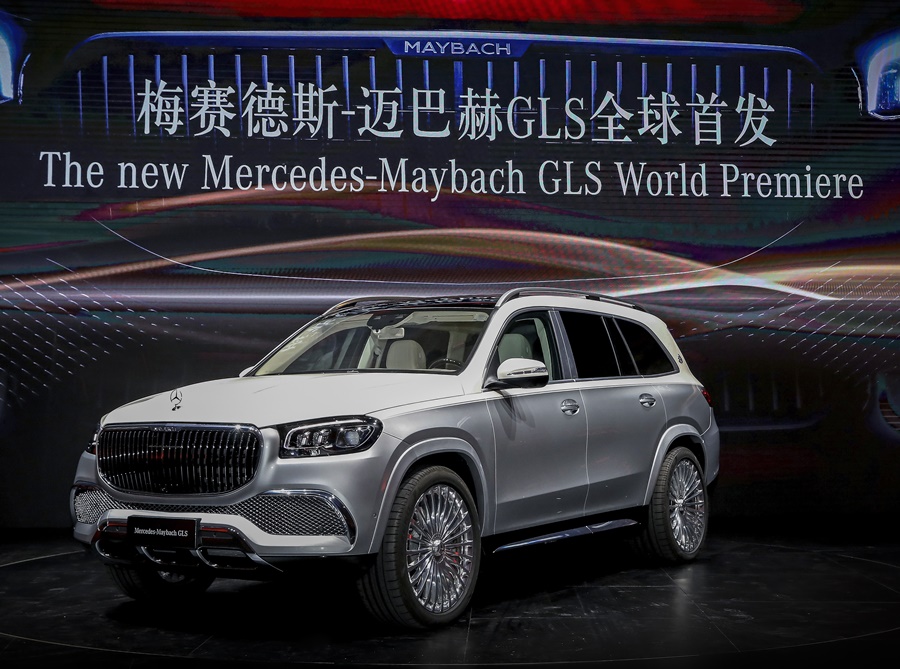 Why Mercedes-Maybach chose China for the launch
New SUV models have usually made their global debut at American motorshows since the SUV market is huge. However, Mercedes-Benz did not do so this time. Why? In 2018, more Mercedes-Maybach saloons were sold than in any previous year (+21.8%) and more than two-thirds of these cars are travelling on roads in China. This year, demand for the cars in the world’s largest car market has been averaging 600 units a month. So it’s not surprising that the company chose the Guangzhou International Automobile Exhibition on this week to introduce its first SUV model – the GLS 600 4MATIC.

With the exception of Land Rover and its Range Rover which was in a different era, Mercedes-Benz was the second carmaker to introduce a premium SUV with the M-Class in 1997 and has been selling lots of such vehicles since then. It has built up a lot of experience in developing SUVs which would have gone into the GLS 600 to offer ‘a new form of luxury in the SUV segment’. Pricing has not been revealed but the new model will appear in some markets during the second half of 2020.

It extends the portfolio of the Mercedes-Maybach brand by combining the body design and technical basis of the GLS with the luxury of a top-class saloon. Power comes from a V8 engine with a displacement of 4 litres which can develop 558 bhp/730 Nm and has been specially tuned for the Mercedes-Maybach. It is combined with the EQ Boost 48V system that contributes up to 22 bhp and 260 Nm. 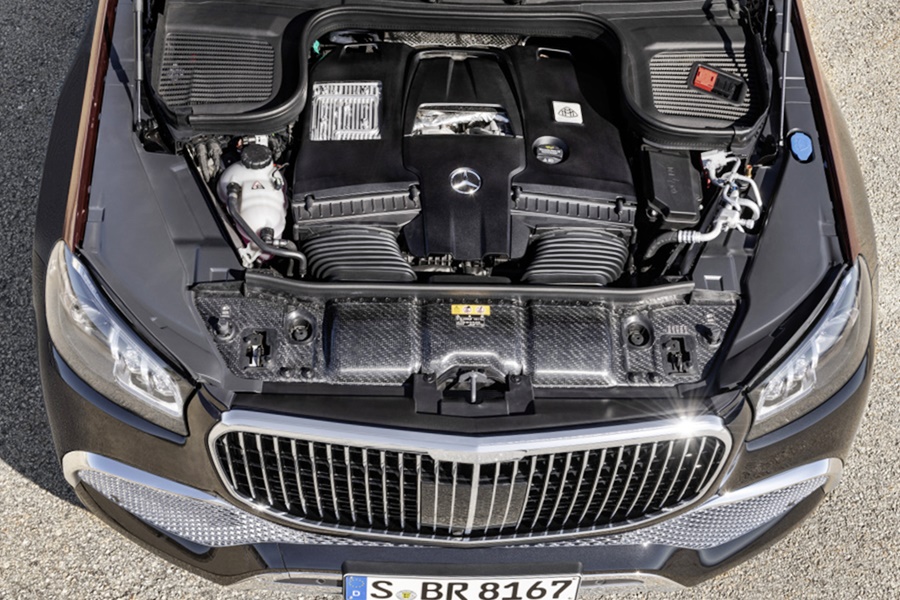 Dignity and elegance
The Mercedes-Benz star sits on the bonnet in the classic way with fine, vertical chrome struts of the Maybach radiator grille creating a pinstripe effect. Effective chrome highlights around the side windows, and the chrome inserts in the side sill panels, lend dignity and elegance to the profile. 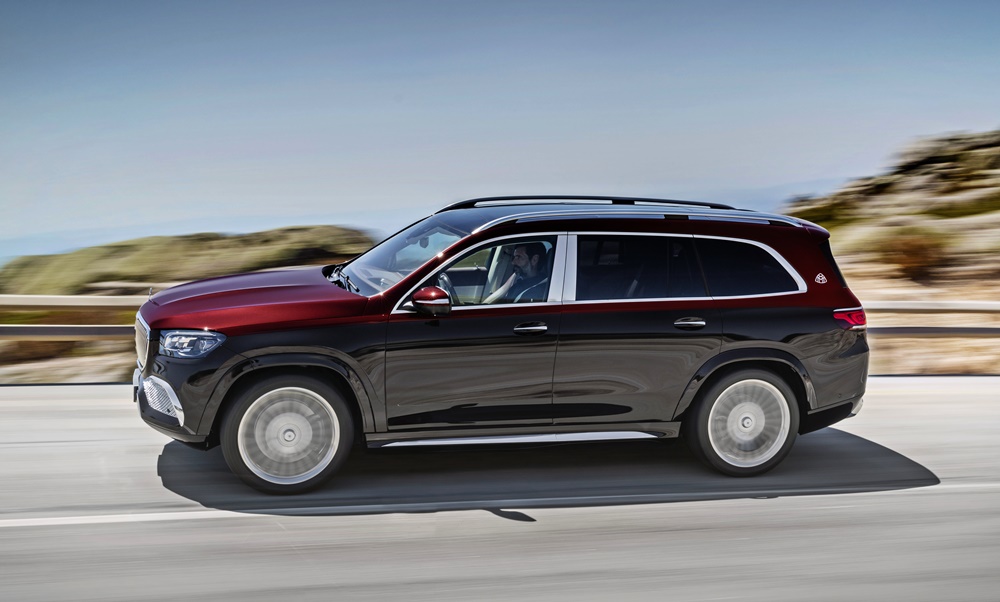 The 22-inch or 23-inch wheels were developed exclusively for this model, with the 23-inch version echoing the pinstripe theme. The tailpipe trim elements with a small cross rib emphasise the model’s identity as a Mercedes-Maybach. The same applies to the brand emblem, which is positioned at various points such as on the D-pillar. As a special, Maybach-specific feature, two-tone paintwork is available in 8 different, elegant colour combinations.

Retractable side steps
An interesting and classy feature which is not commonplace in SUVs are the electrically extending running boards (you would know them as side steps). They make accessing and leaving the higher seating position both convenient and safe. With surfaces of anodised aluminium laced with black rubber strips, illuminated in the dark and particularly wide in the area of the rear doors, they ensure a very special visual appeal. When in their retracted state, the running boards are concealed behind the side sill panels. If a rear door is opened, the running board on the side concerned automatically swings into position in around one second. 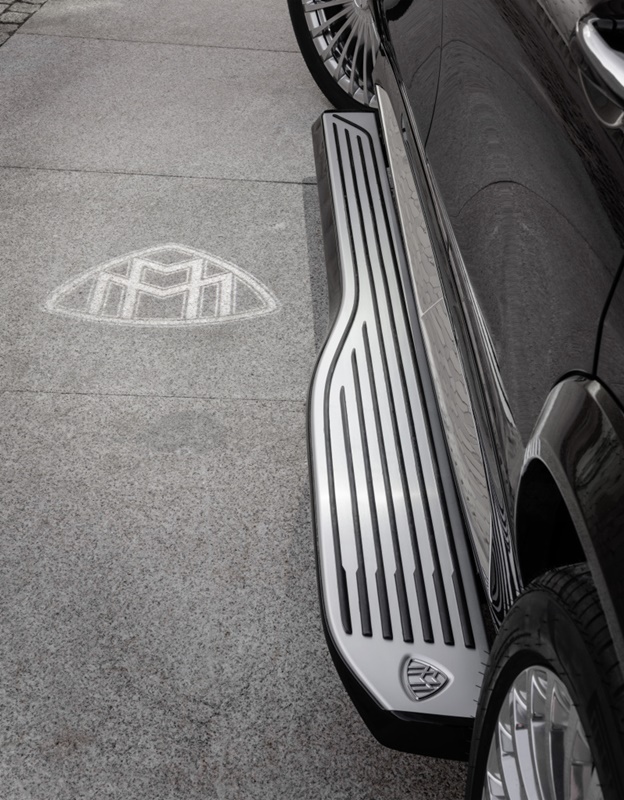 Getting in and out are made more convenient: when the doors are opened, the vehicle is lowered slightly. Not that this is unique as the Range Rover had it back in the mid-1990s and air suspension has made it easy to incorporate. The AIRMATIC suspension is standard and there is also an optional, fully-active suspension with E-ACTIVE BODY CONTROL that effectively keep the road bumps at bay. There is a dedicated drive program for the suspension and powertrain with settings that can prioritise rear seat passengers’ comfort.

The best available for occupants
Technical information on the GLS 600 is limited at this time but there is a lot of emphasis on interior comfort and appointments. As would be expected, the highest-grade materials are used and the extremely effective noise insulation creates a stylish, cocoon-like feel-good atmosphere. With the standard MBUX Rear Tablet in the centre console or the armrest between the rear seats, the extensive comfort and entertainment functions can also be intuitively controlled from the rear seats. 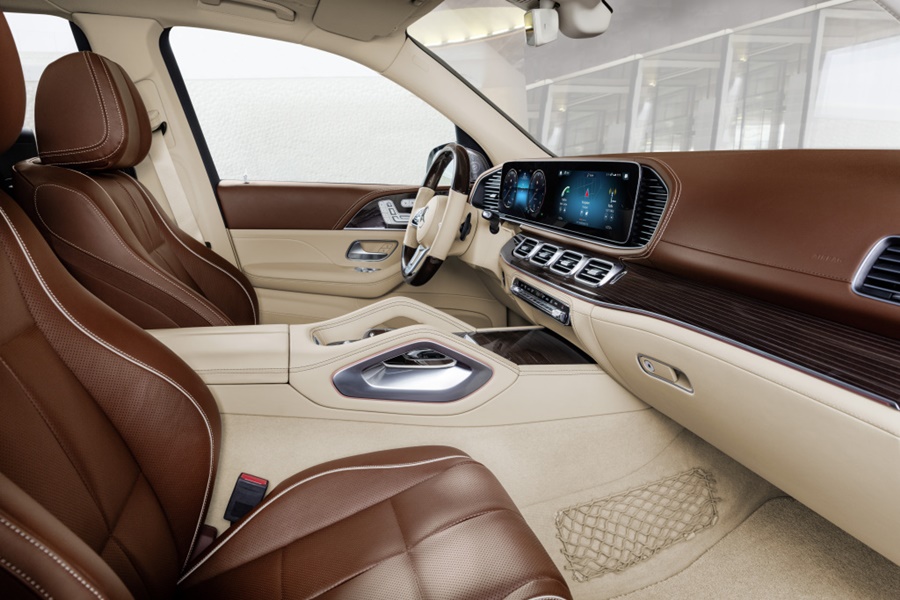 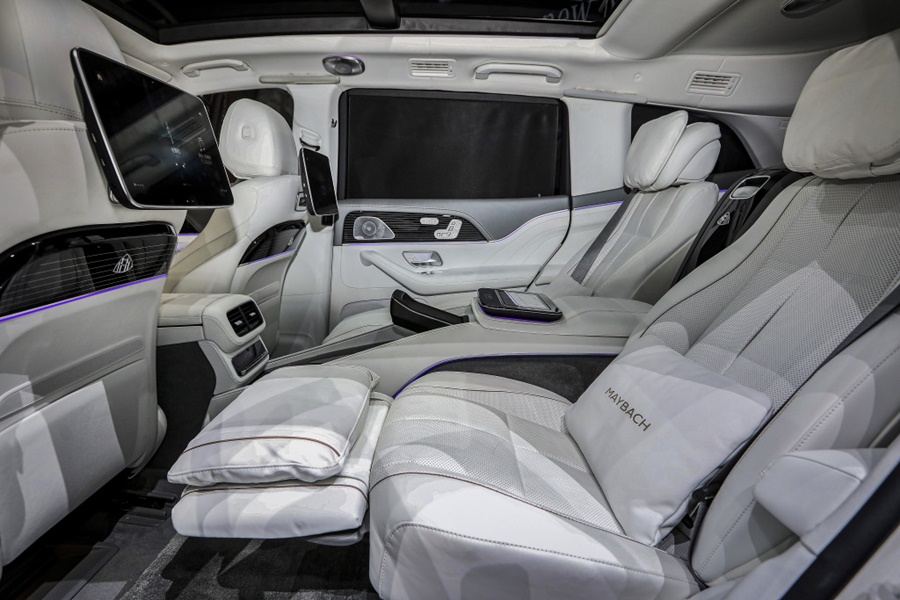 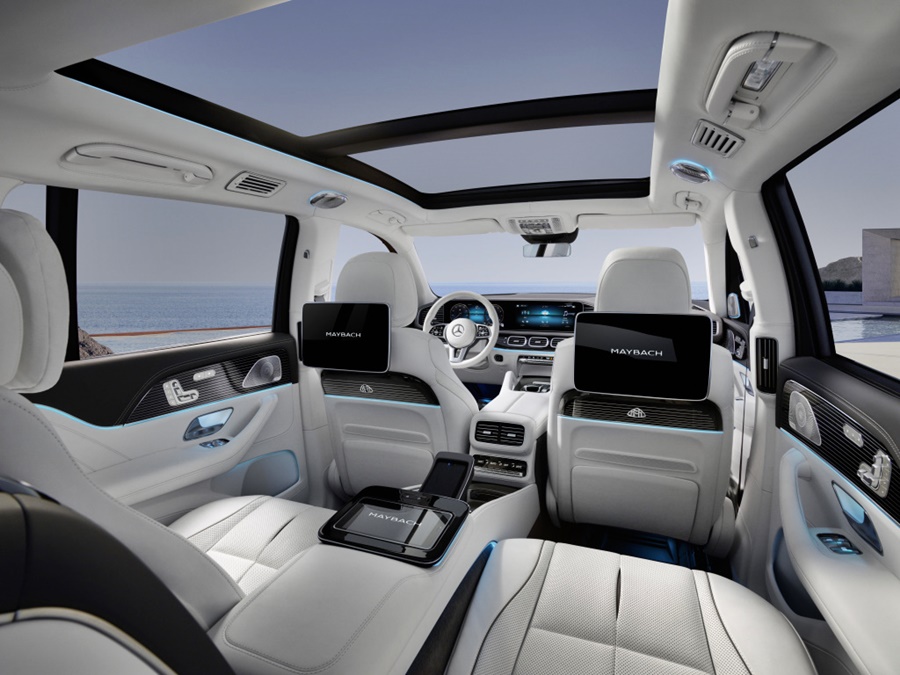 From their elevated seating position, thanks to electrically operated roller sun blinds on the two rear side windows, the passengers can decide for themselves how much of their surroundings they want to see. Overhead is an electrically opening panoramic sliding/tilting sunroof with an opaque roller blind as standard equipment. 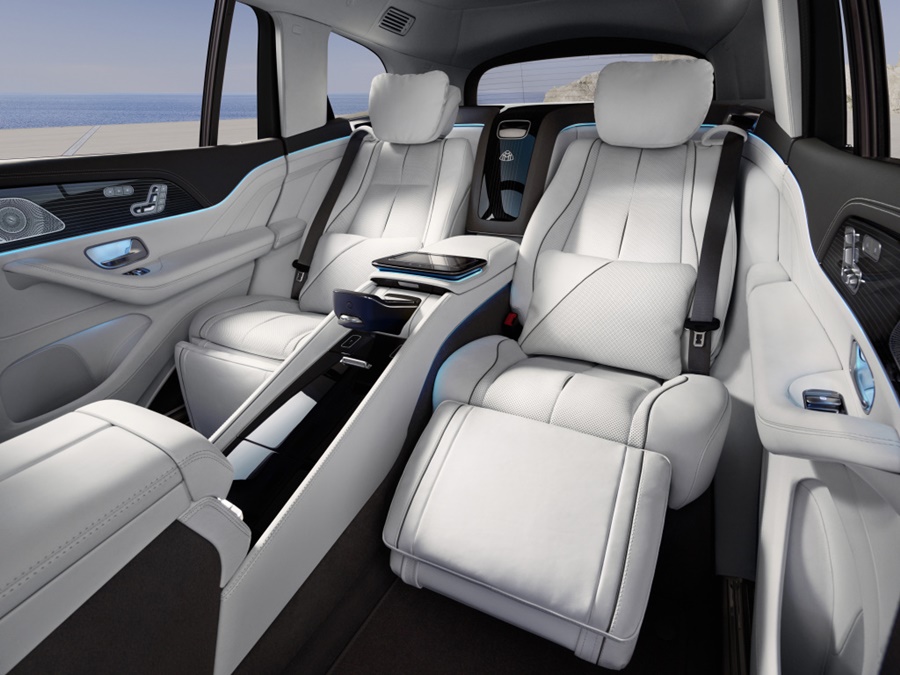 Rear passengers’ comfort prioritised
The two outer rear seats can be electrically converted into reclining seats. Padded areas and the dashboard are finished in fine nappa leather as standard, with a range of further cushions and leather interior linings available on request., as are climatised massage seats. Obtainable on special request, the fixed centre console transforms the car into a spacious 4-seater whose rear is just as suitable for working as for relaxing. This console is available with extending, folding tables, even a refrigerator with space for champagne bottles. Suitable silver champagne flutes for this are available from the accessories range. 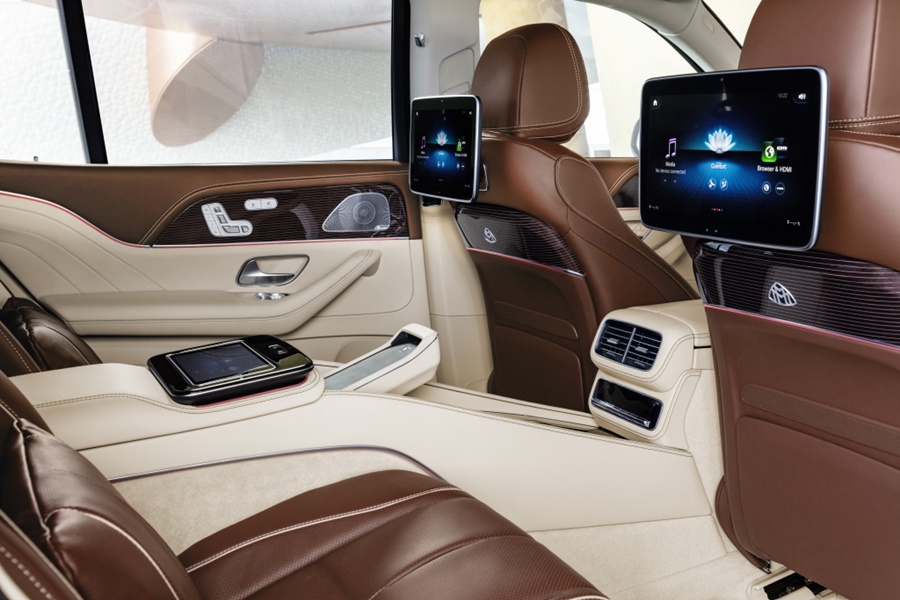 A dedicated fragrance was developed for the GLS for active fragrancing as part of the optional AIR BALANCE package: a white osmanthus blossom, floral and light, is rounded off by a gentle leather note and spicy tea. A separate air conditioner for the rear seats is standard and features additional outlets and heater boosters with which temperature control is even faster and draught-free. 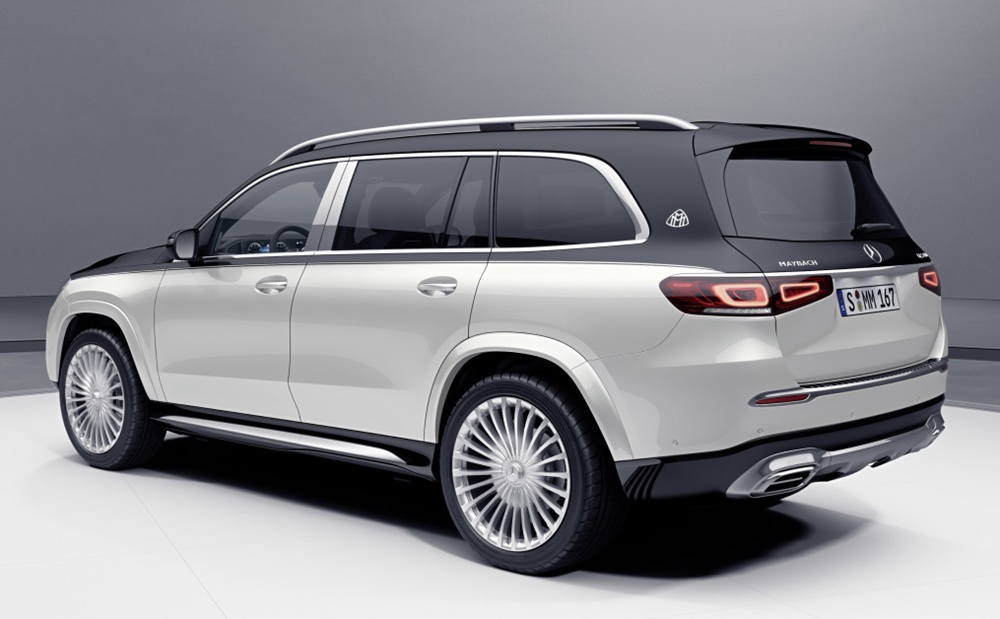 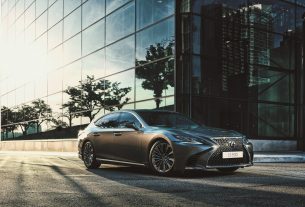 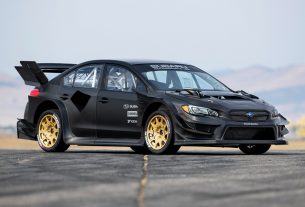 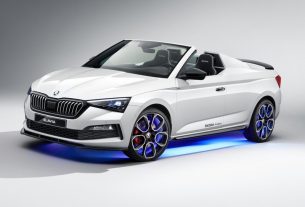