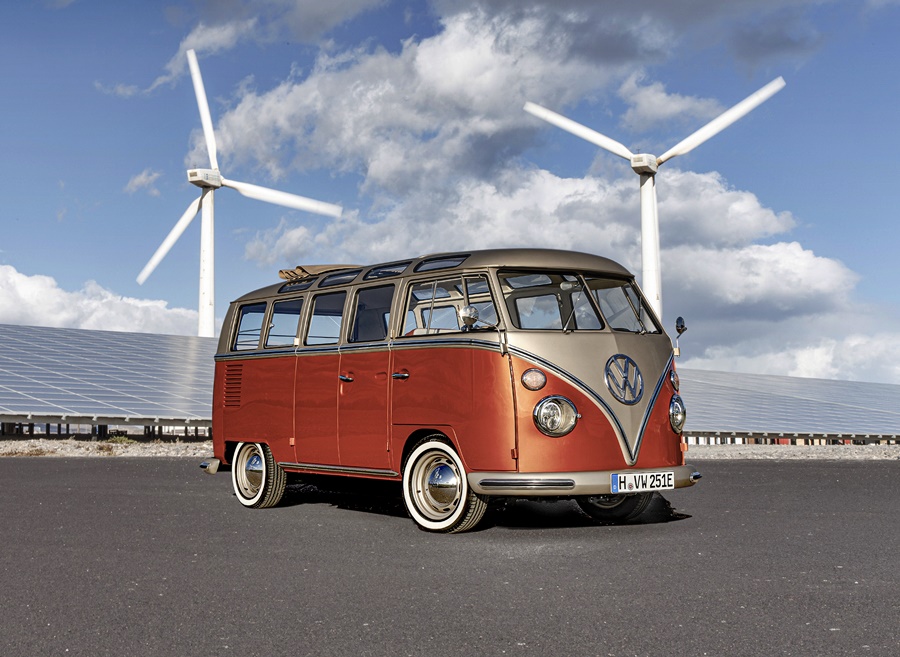 In due course, it will be possible for owners of the original Volkswagen T1 to make a conversion of the powertrain to a zero emissions electric drive system. Volkswagen Commercia Vehicles (VWCV), collaborating with eClassics, has developed a conversion package which is demonstrated in the e-BULLI all-electric concept vehicle.

VWCV engineers and designers formed a team along with drive system experts from Volkswagen Group Components and eClassics (a company which specialises in electric car conversions) to develop the e-BULLI. For the concept model, they chose a T1 Samba Bus produced in 1966 which, prior to its conversion, spent half a century on the roads of California. 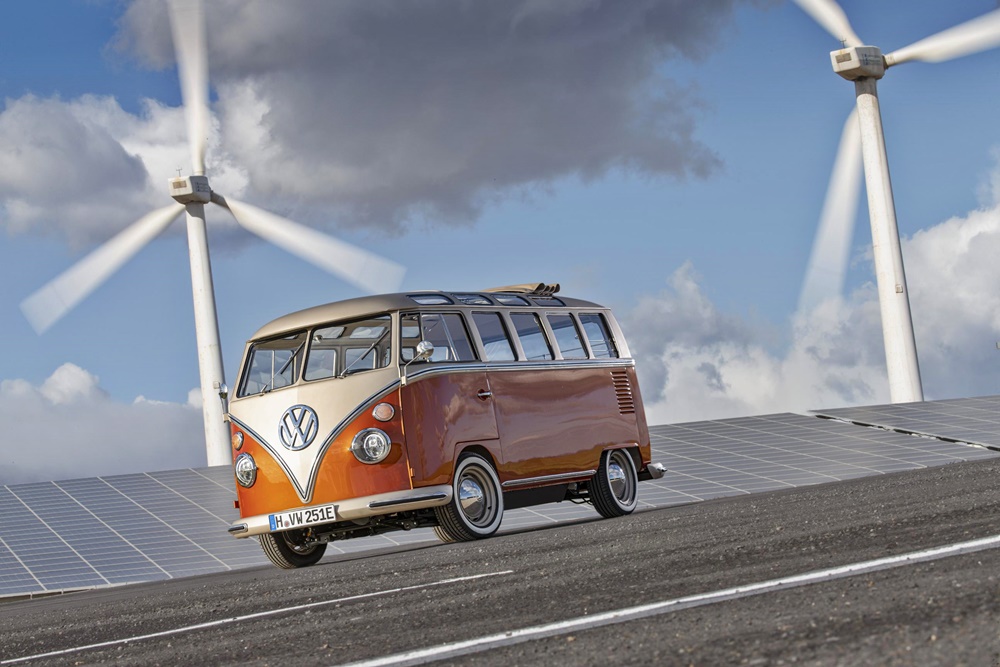 New electric drive system components
The original 44 ps 4-cylinder boxer engine is replaced by a silent Volkswagen electric motor generating 61 kW (83 ps) and 212 Nm, the torque being more than double that from the engine before. The comparison of the engines’ power output alone makes it very evident that the concept vehicle will have completely new drive characteristics with performance unattainable using the original combustion engine.

Power transmission is by means of a 1-speed gearbox. The automatic transmission has 5 positions (P, R, N, D, B) and in position B, the driver can vary the degree of recuperation, ie of energy recovery when braking. The e-BULLI is claimed to have top speed of 130 km/h (electronically limited), 25 km/h more than the original T1.

Just like the powertrain of the 1966 T1, the combination of gearbox and electric motor integrated in the back of the 2020 e-BULLI drives the rear axle. A 45 kWh lithium-ion battery pack provides energy for the electric motor while a DC/DC converter provides 12V power for on-board electronics.

As in the new ID.3 and future ID.BUZZ, the battery pack is housed centrally in the vehicle floor. This layout lowers the e-BULLI’s centre of gravity and thus improves its driving characteristics. 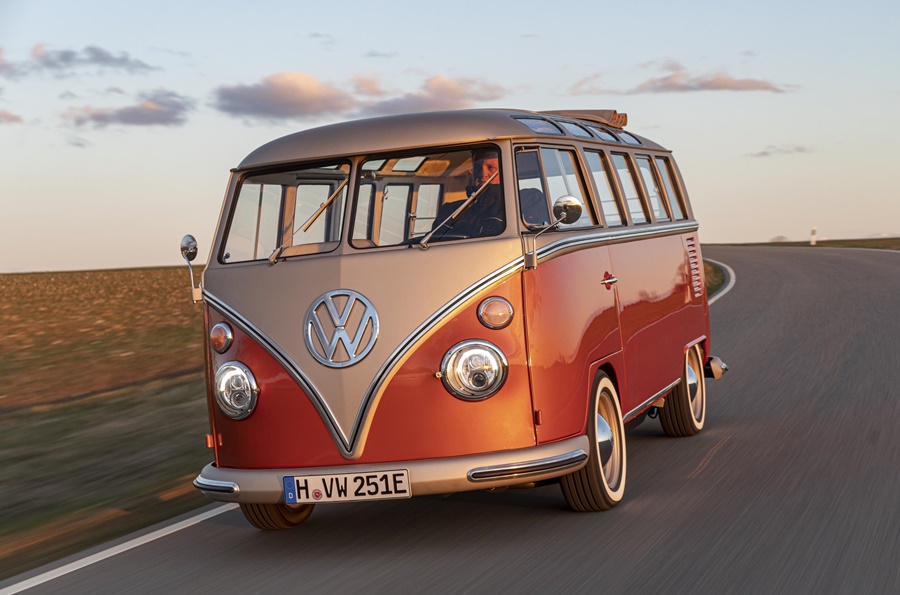 80% recharge in 40 minutes
The battery pack is charged via a combined charging system (CCS) socket. It enables charging with AC or DC electrical supply. Thanks to the CCS charging socket, the battery pack can also be charged at DC fast-charging points with up to 50 kW of charging power. In this case, recharging up to 80% energy levels can be done within 40 minutes. The range with a fully charged battery packs is claimed to be more than 200 kms.

Redesigned chassis
Compared to the T1, riding in the e-BULLI will feel completely different. This is due to the redesigned chassis which consists of multi-link front and rear axles with adjustable shock absorbers and coil-over struts. There is also a new rack-and-pinion steering system and 4 internally-ventilated disc brakes.

New looks
In parallel with the new electric drive system, an interior concept has been created for the e-BULLI that is both stylish and avant-garde. The new look and corresponding technical solutions were developed by the VCVW design centre together with a team from VWCV Vintage Vehicles and the Communications department.

The designers modernised the exterior of the iconic vehicle with great sensitivity and finesse, including giving it a two-tone paintwork finish in Energetic Orange Metallic and Golden Sand Metallic MATTE.

Details such as the new round LED headlamps with daytime running lights modernise the looks. On the outside at the rear, there are also LED charge indicators. They signal to a driver walking up to the e-BULLI how much charge the lithium-ion battery still has. 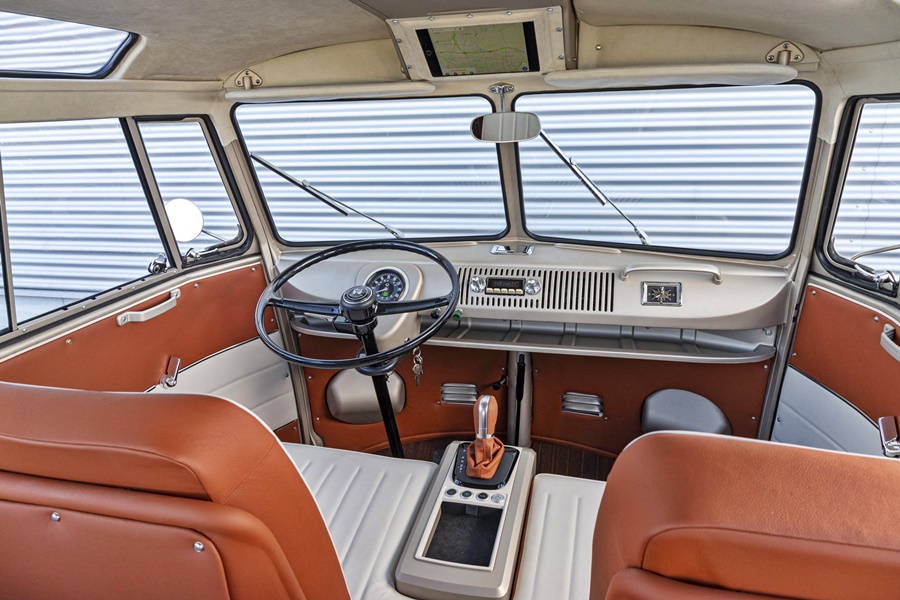 Original interior concept modernised
The 8-seat interior has a few things not expected to be in a T1. While the designers have re-imagined a lot of the interior, they did not forget the original concept and the seating is one of the new features. In keeping with the external paintwork, it is also in two colours. Solid wood looking like that of a ship’s deck is used for the floor throughout and, with the nice bright leather tones, the electrified Samba Bus takes on a maritime feel. This impression is strengthened by the large panoramic folding roof.

The new speedometer is based on the original while a two-digit display within it creates a link to the modern era. There is a small detail in the centre of the speedometer: a stylised Bulli symbol. A multitude of further information is shown via a tablet integrated into the roof console. 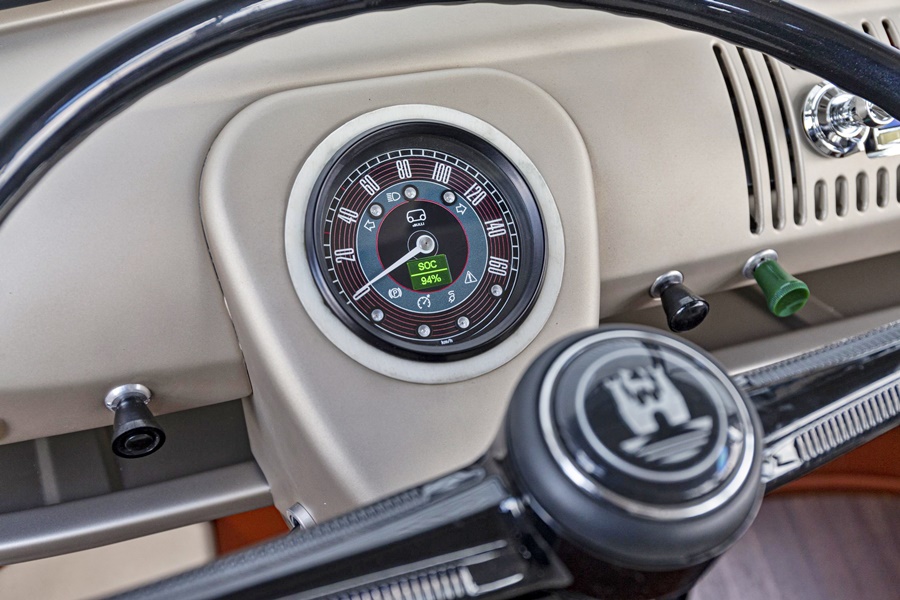 Music on board comes from an authentic-looking retro-style radio which is equipped with cutting edge technology such as DAB+, Bluetooth and USB. The radio is linked to a sound system with high quality components, including an active subwoofer. 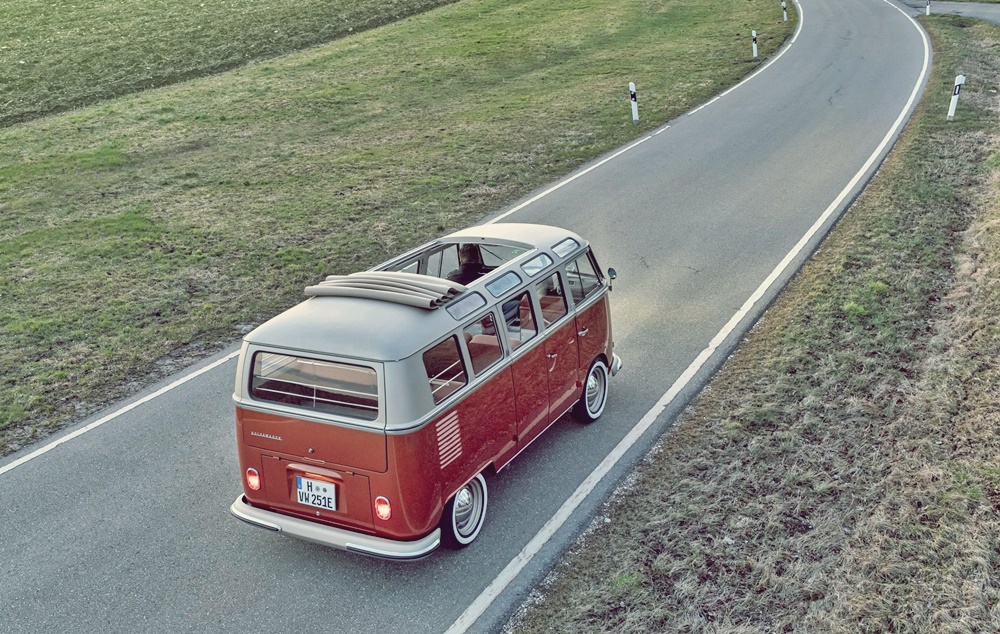 The e-BULLI will be available at prices starting from 64,900 euros (about RM307,000) for the T1 conversion (complete with redesigned front and rear axles), with T2 and T3 conversions also being offered by eClassics in Europe.

Volkswagen’s electric vehicles will use a 1-speed gearbox! 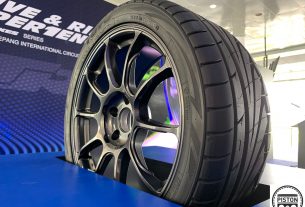 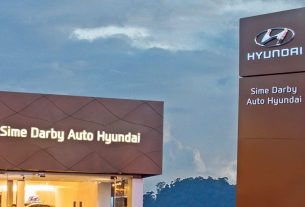 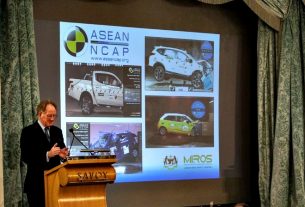