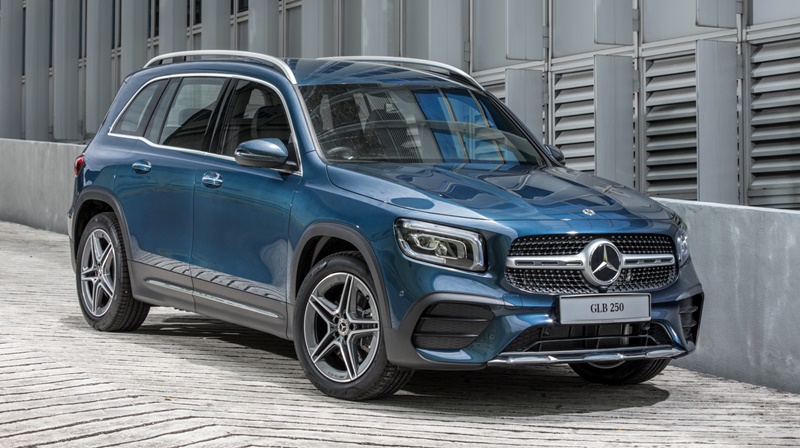 When Mercedes-Benz announced its rationalization of model nomenclature or designations in late 2014, the offroad-SUV category had the G-Class, GLS-class, GLE-class, GLC-class and GLA-class. The new designations were matched to the core models (S-Class, E-Class, C-Class and A-Class) but there was a gap between the GLC-class and GLA-class which had no equivalent SUV to the B-Class. 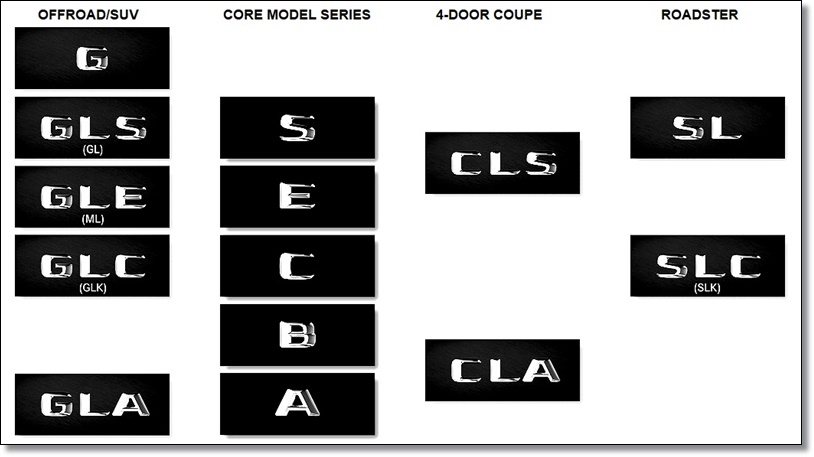 5 years later, that gap was finally filled with the new GLB-Class, initially shown as a concept in Shanghai in April 2019 with the production model unveiled in America in June of the same year. Like the GLE (made in America), the GLB is produced outside Germany in Mexico as well as China, and after going on sale at the end of last year, it has finally arrived in Malaysia.

Three engine choices
The GLB 200, which doesn’t have all-wheel drive, is powered by a 1332 cc 4-cylinder petrol engine.  That may sound rather small but the engine, co-developed with Renault, has turbocharging which enables it to develop 163 bhp/250 Nm from the 1.3-litre displacement. With a 7G-DCT 7-speed automatic transmission, the 1,600-kg SUV has a claimed 0 to 100 km/h time of 9.1 seconds and a top speed of 207 km/h.

The GLB 250 is powered by a familiar engine – the M260 unit which has a 1991 cc displacement and with turbocharging, delivers 224 bhp/350 Nm through an 8G-DCT 8-speed automatic transmission. The 4MATIC system varies torque according to surface conditions to achieve optimum grip and stability. This variant is claimed to be able to go from 0 to 100 km/h in 6.9 seconds and reach 236 km/h.

For those who want to get to their favourite beach or fishing pond as fast as possible, the GLB 35 has significantly stronger performance with claimed 0 to 100 km/h acceleration of 5.1 seconds and a top speed of 250 km/h. It uses the same M260 engine but tuned for higher output of 306 bhp/400 Nm. To optimize power delivery, the GLB 35 is fitted with an AMG SPEEDSHIFT 8G-DCT 8-speed automatic transmission and AMG’s Performance variable 4MATIC all-wheel.

Traditional SUV style
All three variants share the same bodystyle which follows the more traditional SUV style. Though it is said that there is influence from the iconic G-Class, the lines are less ‘hard’ and there’s a nice blend with modern aesthetics. 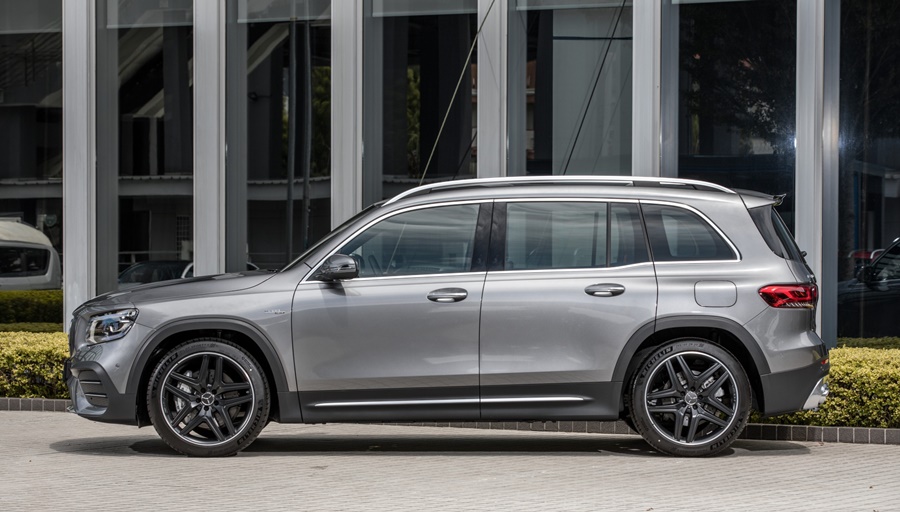 The front end is upright with a visual skidplate to convey ruggedness while distinctive air intakes in the front apron are tailored to the contours of the radiator grille. While the GLB 200 and GLB 250 have similar themes for the grilles – two horizontal bars for the GLB 200 and one for the GLB 250 – the GLB 35 has its own exclusive design in the AMG style. The front splitter, the prominent rear apron with two round, single tailpipe trim elements, and the AMG roof spoiler in the vehicle colour with a black spoiler lip are also exclusive to this variant. 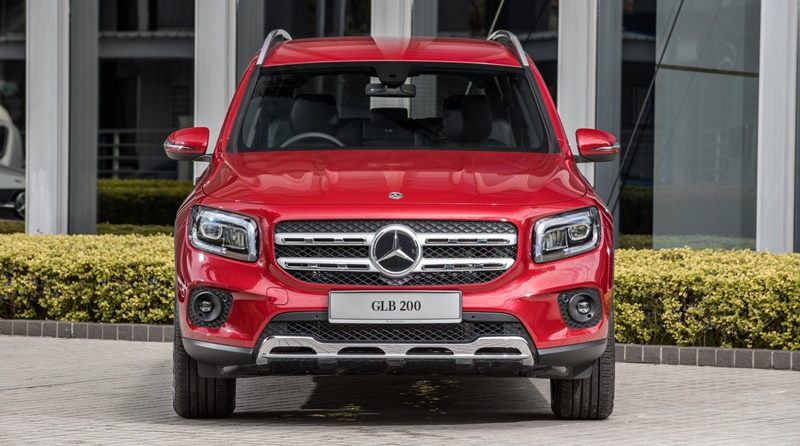 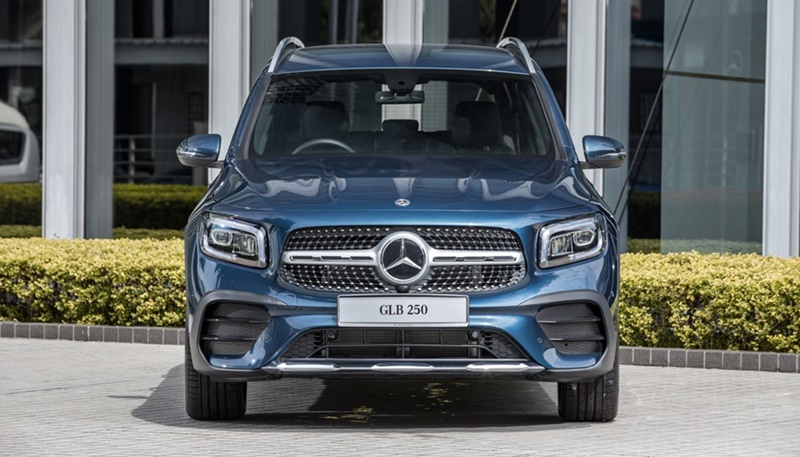 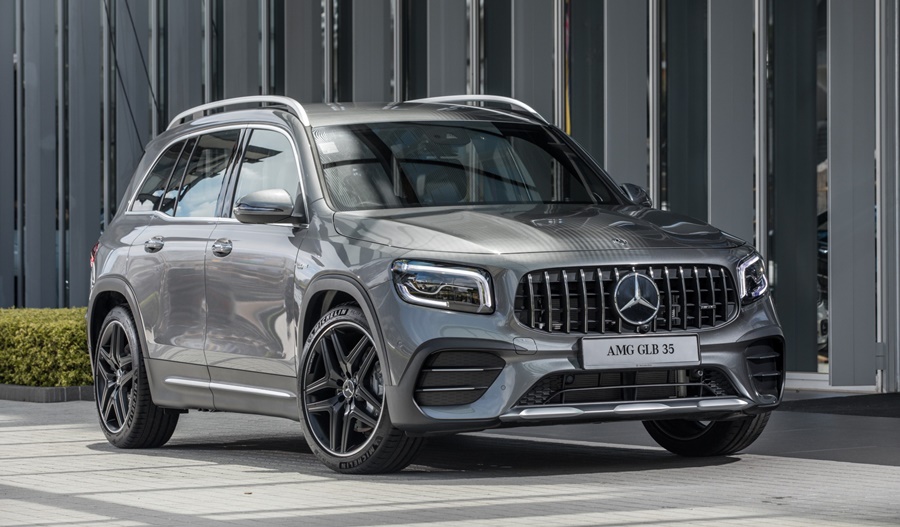 Along each side, the GLB has panels under the doors and the wheel arches that reinforce the rugged theme. These are not just for looks and offer protection for the bodywork when driving off-road.

Longer wheelbase for three rows
The GLB’s 4.62-metre overall length puts it right between the GLA and GLC atlhough it actually sits on a similar platform as the GLA but with the wheelbase extended by 100 mm. This allows a third row of seats to be installed at the back for another 2 persons. 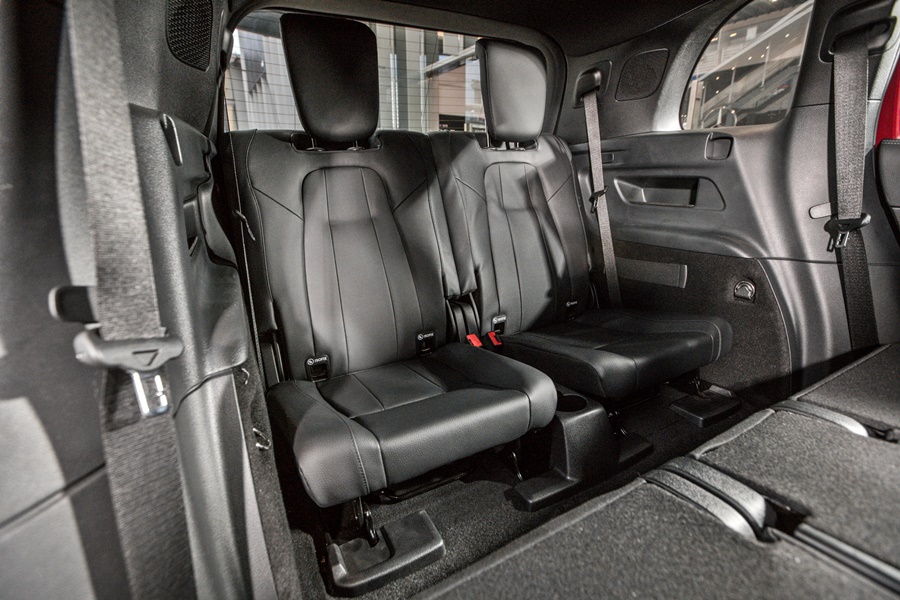 In some markets, the third row is an option but it seems that Mercedes-Benz Malaysia is making it standard so the GLB is a 7-seater. It is noted that the two seats in the third row will be comfortable enough for people up to a height of 1.68 metres.

Getting to the third row is by folding down the second row seats which move forward to create a gap for access (or exit). ISOFIX and TOP-Tether anchorages are available for compatible childseats and up to 4 childseats can be installed in the second and third row. 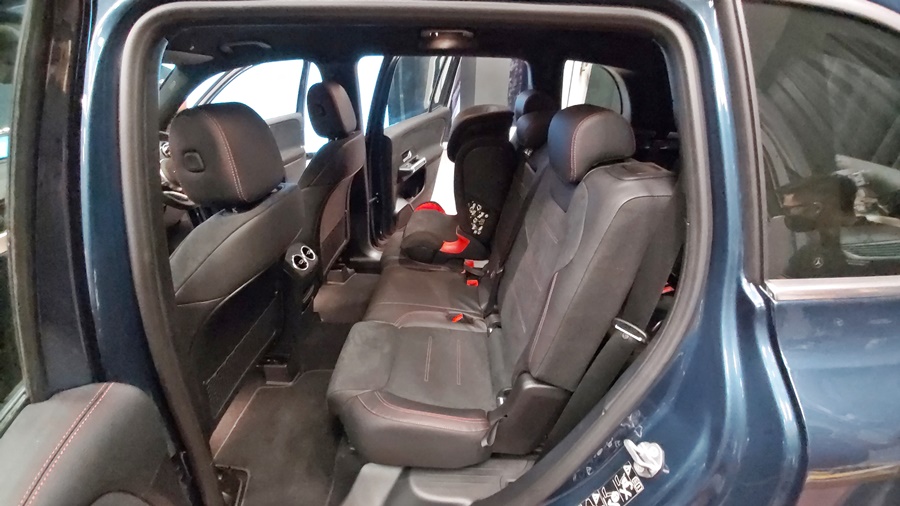 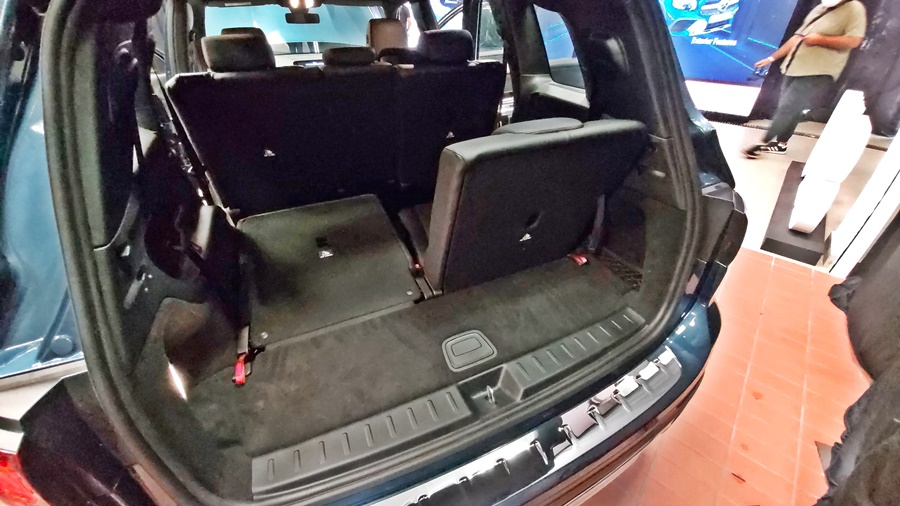 If the third row is used, the available space in the boot is limited to 570 litres. Enough for groceries on a supermarket run but a bit tight for the luggage of seven persons on holiday. But like all SUVs, the backrests can be folded down; with the third row down, the volume increases to 1,805 litres and if the second row is down as well, another 190 litres will become available.

‘Technical’ theme within
The interior design has a ‘technical’ theme with metallic trim. Tubular elements with a milled look are used and even the buttons of the air-conditioning controls give the impression of having been milled out of an aluminium cylinder. Materials like nappa leather and carbon structure trim reflect the high quality the brand is well known for. 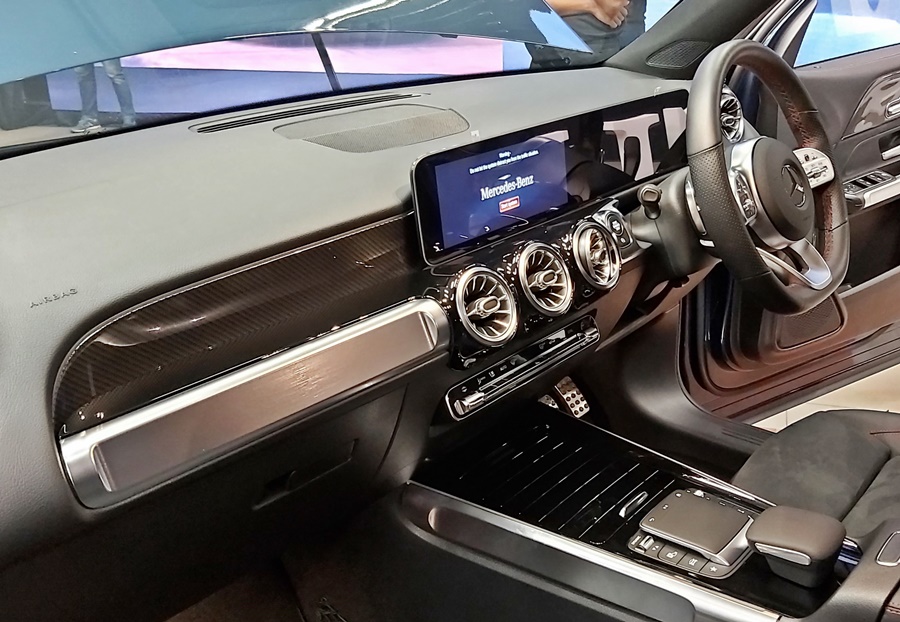 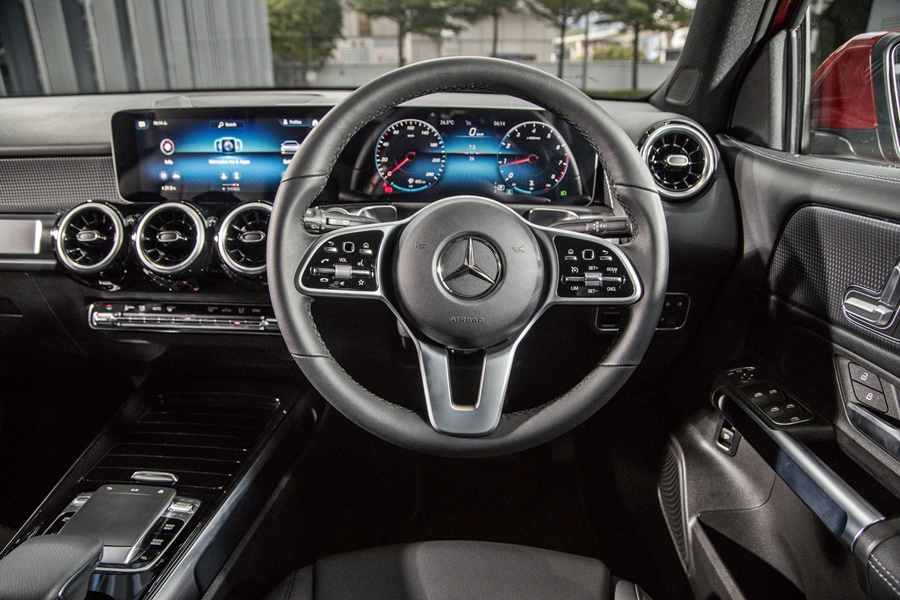 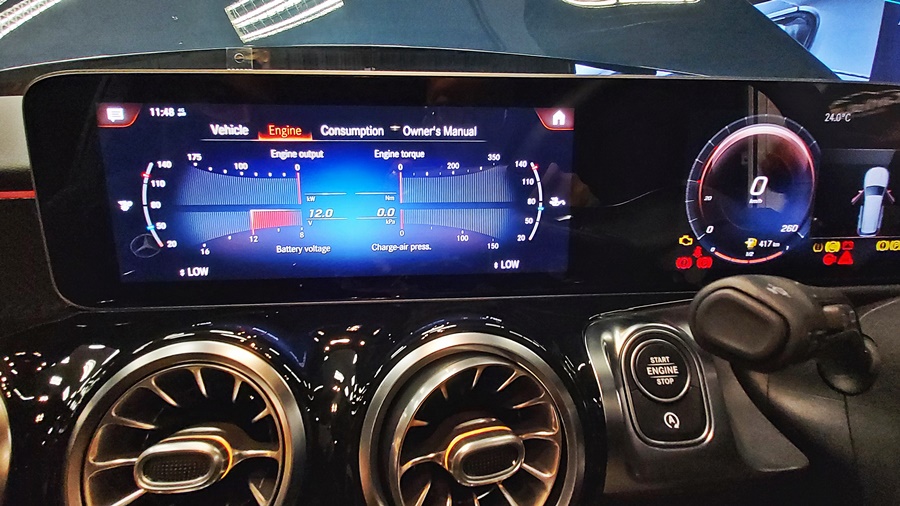 The instrument panel (with a choice of screens) is laid out with a Widescreen Cockpit concept that has two 7-inch colour displays for the instrument cluster and media display. The touchscreen and Touch Control buttons on the sports steering wheel operate and interact with MBUX (Mercedes-Benz User Experience) intelligent assistance system. The latest generation of the Mercedes me connect also comes as standard in the GLB, allowing the owner to remotely connect with the vehicle and carry out certain functions. 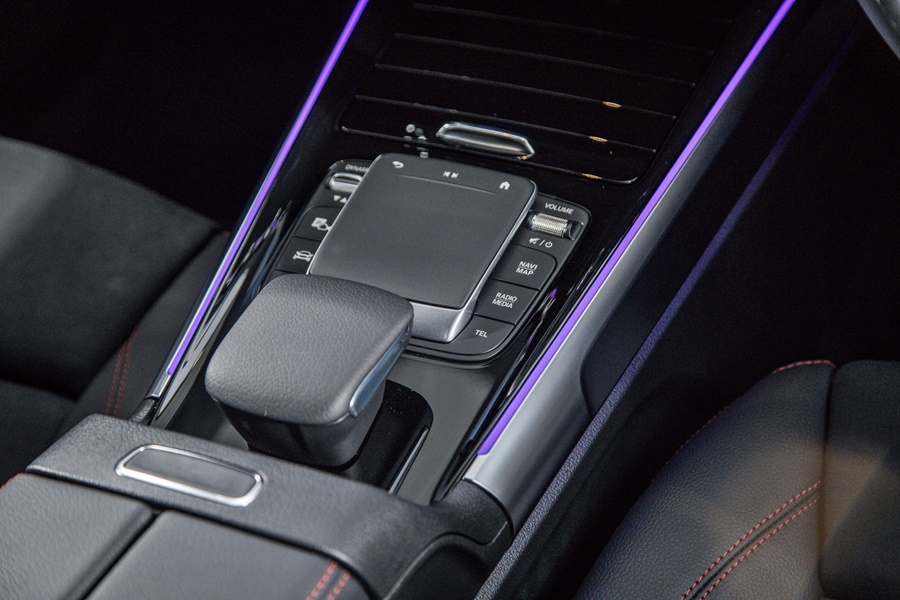 Safe, as always
It goes without saying that the GLB is a very safe SUV to drive and besides Blind Spot Assist with Exit Warning and the PRE-SAFE System for this model, there is also Active Braking Assist with a turning-off function. This activates when the driver intends to turn off across the oncoming lane; if there is a risk of collision with oncoming traffic when starting off, the GLB will brake automatically. The presence of other vehicles is detected via an intelligent fusion of radar and camera signals.

There’s also PARKTRONIC to help the driver place the GLB in a bay. It uses an array of advanced sensors in the bumper to determine if the vehicle is able to fit into a parking spot. If it can, all the driver needs to do is control the brakes and gear selection as the vehicle steers itself into the space. 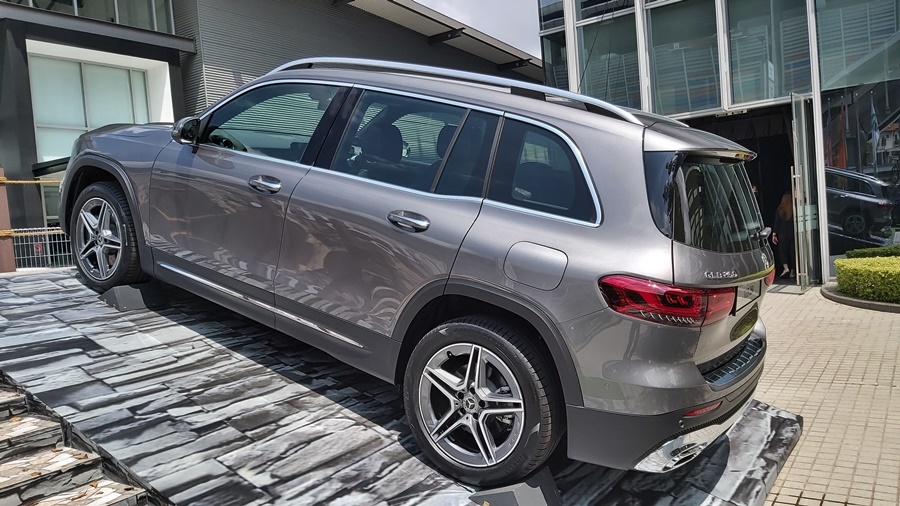 Financial services available
Those who are ready to buy a GLB can consider Possi-B-ilities Financing offered by Mercedes-Benz Malaysia Financial Services. Benefits include lower monthly instalment (from RM2,688 a month), flexible end of agreement options, MobilityPlus programme and most importantly, a guaranteed future value of the GLB. The offer is for a limited time and subject to terms and conditions. 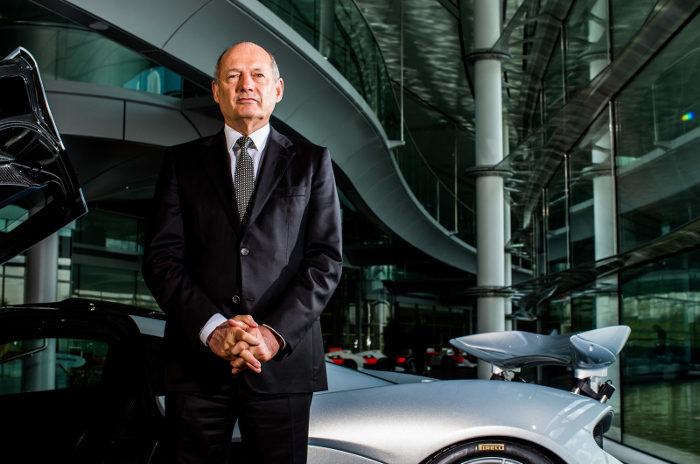 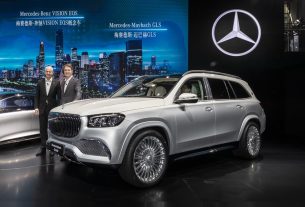 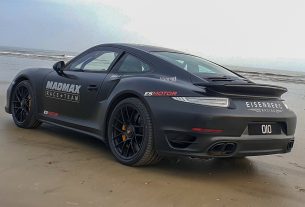