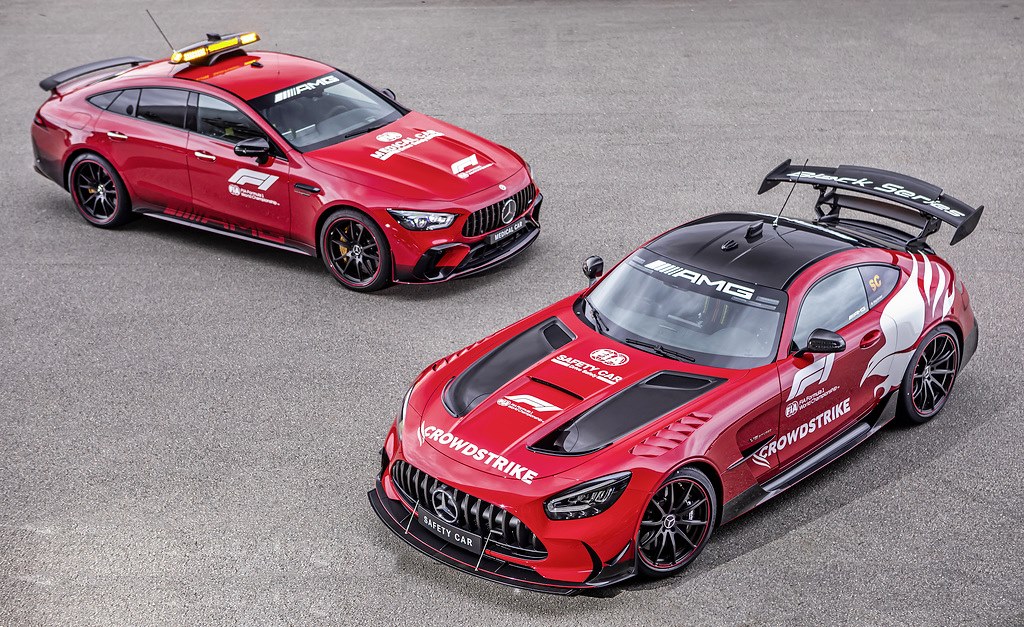 As in 2021, the 2022 Formula 1 World Championship will have Official F1 Safety and Medical Cars from two brands – Mercedes-AMG and Aston Martin. The cars will be used during different rounds and for the first round on March 18, it will be the Mercedes-AMG GT Black Series for the Safety Car and GT 63 S 4MATIC+ Medical Car. It will be the first time that the estate model (previously the C 63 S AMG Estate) is not used since Mercedes-AMG began supplying F1 Official Cars in 1996.

“Recent years have seen Mercedes-AMG celebrate a huge number of amazing successes in the FIA Formula One World Championship. Eight constructors’ titles and seven drivers’ titles in the last 8 years speak emphatically for themselves. Added to that is the extensive and widespread transfer of technology and image from this greatest of all motorsport stages and our series-production vehicles. Motorsport means so much to us, as does the best possible level of safety. There was absolutely no question that, after more than 25 years, we would extend our commitment as the provider of the safety car and medical car – with two absolutely outstanding vehicles from our line-up,” said Philipp Schiemer, CEO of Mercedes‑AMG GmbH. 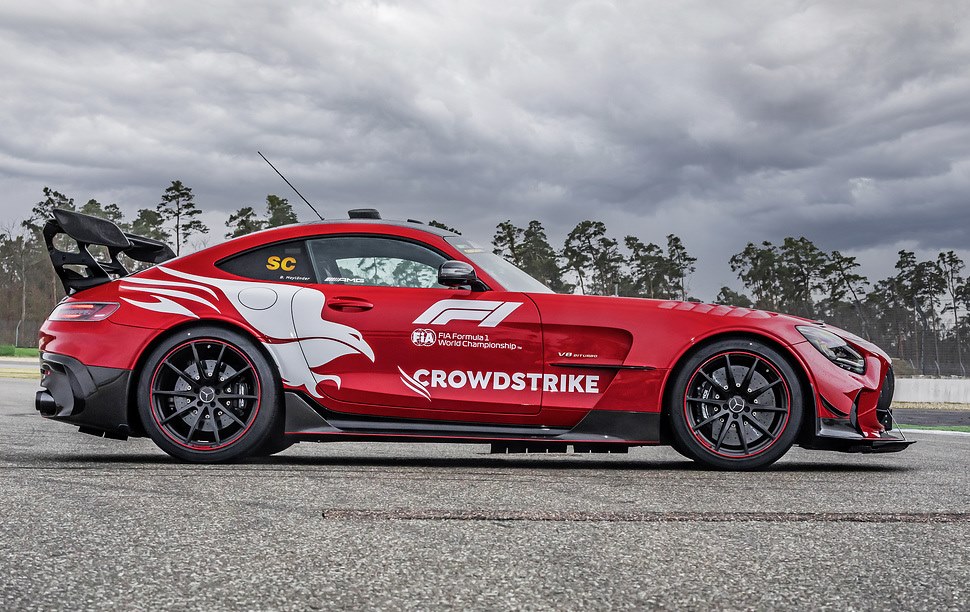 Extensive equipment for F1 job
From a technical standpoint, both cars are almost entirely standard. However, they have extensive equipment specific to their respective jobs on the track. The most noticeable feature of the Official F1 Safety Car is the absence of the usual light bar on the roof, which would have interfered with the carefully refined aerodynamic balance of the AMG GT Black Series. 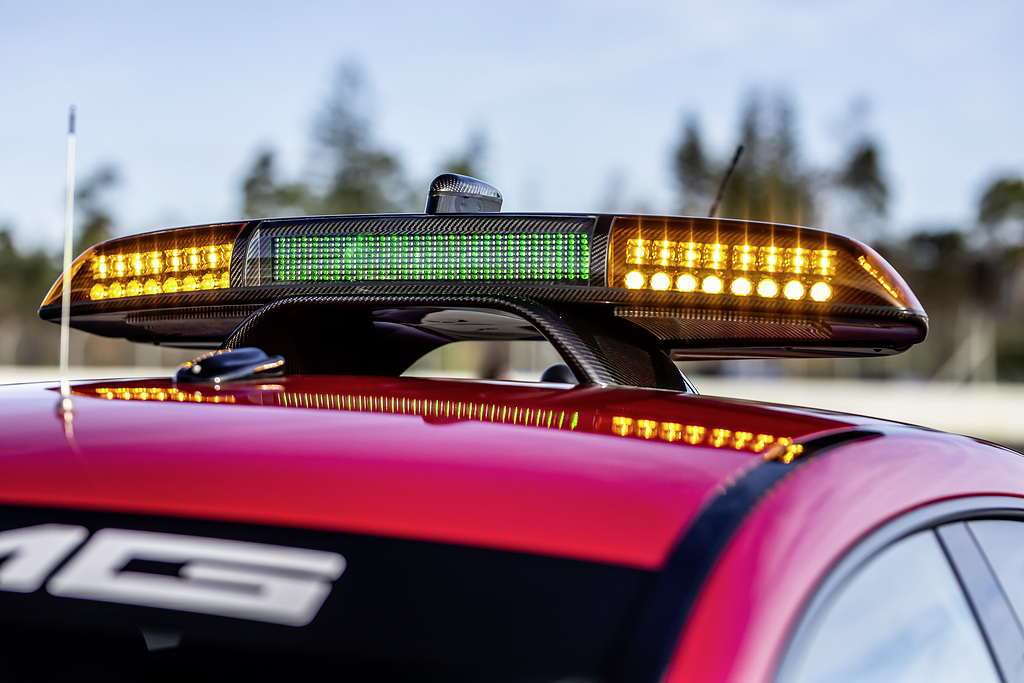 Instead, development engineers at Mercedes-AMG came up with something completely new. At the front, the obligatory signalling has been incorporated into the upper area of the windscreen, while the rearward-facing lights have been elegantly integrated into the rear spoiler. All signalling functions are delivered via fast-reacting and energy-efficient LED lights.

At the front, three small orange light modules and one large green module are positioned on each side of the AMG logo, level with the sun visors. In the main upper blade of the rear spoiler are 13 orange lights – 3 on the outer edges on either side that shine steadily, and 7 more lights in the centre that flash when required. There are also 4 wider, green LED modules.

Two tiny video cameras are installed into the spoiler strut on the right-hand side and their images displayed inside the car. One camera serves as an electronic rearview mirror for the co-driver (small monitor in the headliner to the right of the conventional rearview mirror), while the other transmits a live TV stream. As a service for the spectators in the stands, there is also a light module in each of the rear side windows which displays ‘SC’ (for Safety Car) in orange when the car is in action. 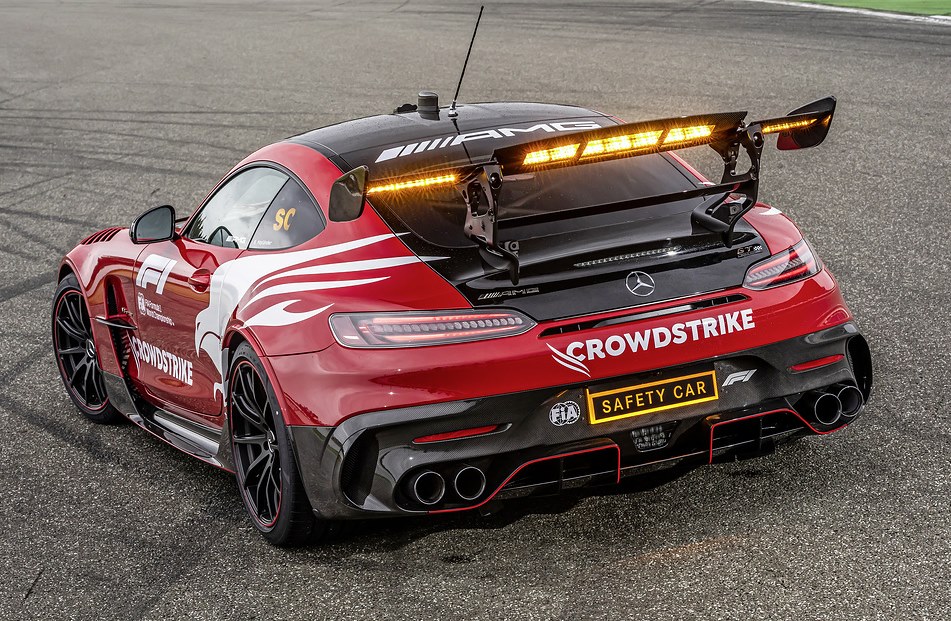 The rear number plate is also illuminated in either orange or green in synch with the safety lights. Likewise, the headlights and rear lights have an important role to play in the signalling. Whenever the safety car is on the track, their rapid flashing draws even more attention.

AMG Track Package
The interior of the Safety Car is the same as that of the standard AMG GT Black Series with the optional Track Package including roll-over protection. The lightweight roll cage made from bolted tubular titanium consists of a main frame, a belt-fixture brace, two rear braces and a diagonal cross at the rear. The system increases the already excellent vehicle stiffness even further and thus has a positive influence on vehicle performance. It also improves passive safety. 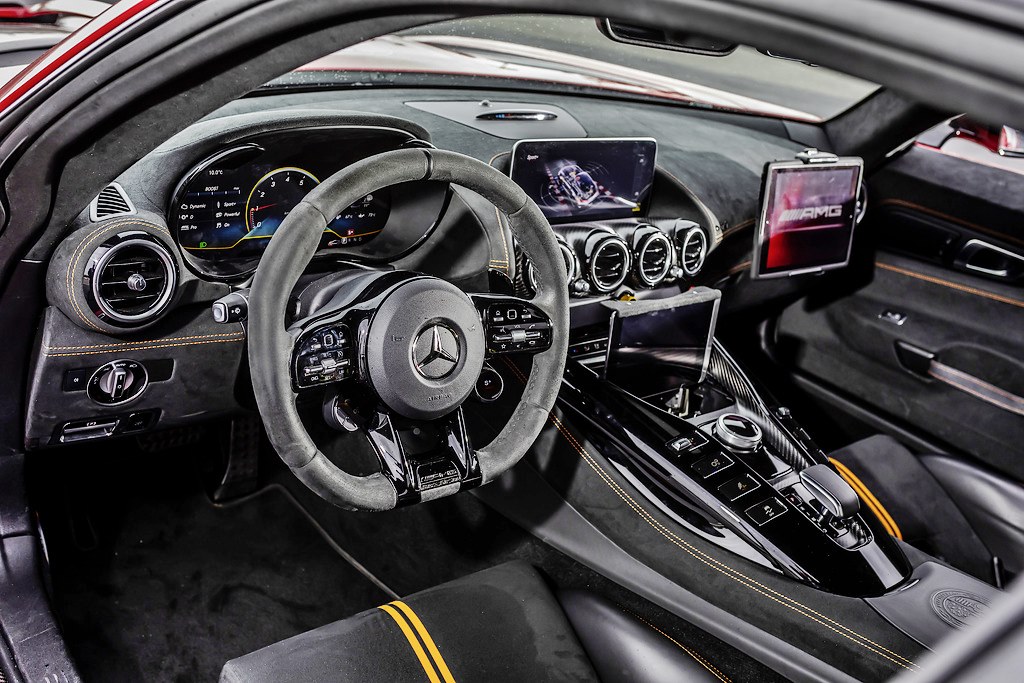 The only new features are the 6-point safety harnesses stipulated by the FIA and two tablets in the centre console and instrument panel in front of the passenger seat. They enable the co-driver to monitor the situation on the track. Displayed on the left tablet in the centre console is the international TV signal, while the right monitor can be switched between the animated representation showing the current position of the racing cars on the track or the current lap times.

Same telemetry systems as F1 cars
Further additional FIA-specific systems are also installed and are identical to those in every F1 racing car. They include the transponder system for time-keeping, the high-resolution GPS and the telemetry. Likewise integrated is the ‘marshalling system’ which uses three coloured LEDs in the instrument binnacle and in front of the co-driver to show the flag signals for the respective section of the track. In addition to that, there is the ‘medical warning light’: in the event of an accident on the track that exceeds a critical g-force threshold, the LEDs flash several times. This provides the crew in the Safety Car with an additional warning to prepare for action. 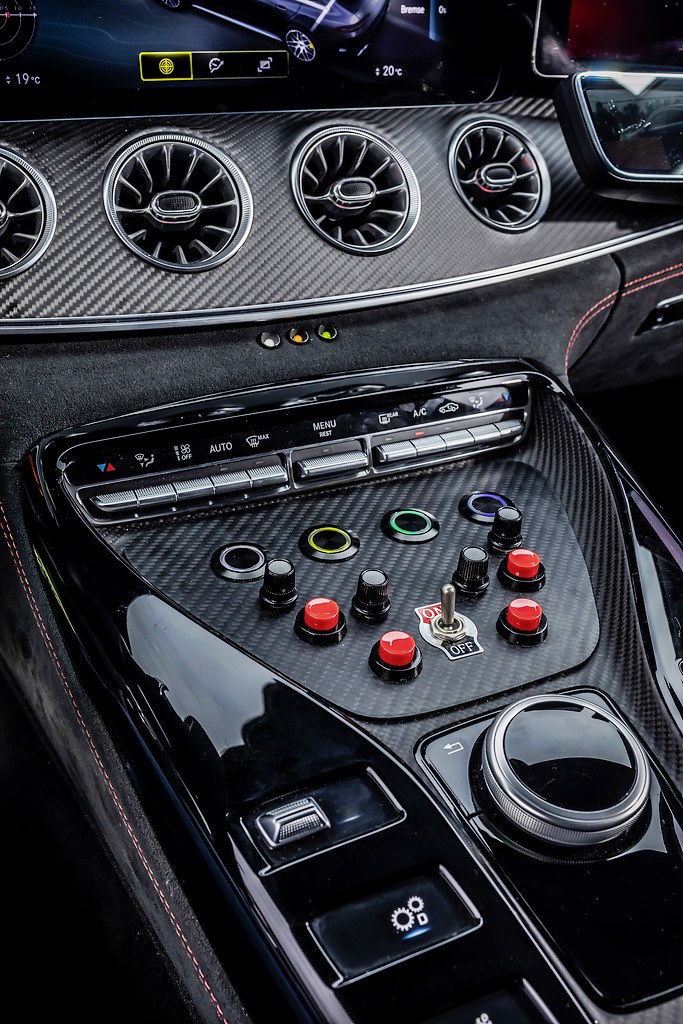 Developed for demanding service
High cornering speeds, dynamic sprints and fast lap times – the FIA sets a demanding job profile for the Safety Car. The bottom line is that it must be able to lead the racing cars safely around the track in extreme situations (often in rain). The Safety Car cannot drive too slowly either as that could lead to the tyres and brakes of the racing cars cooling down too much and cause their engines to overheat. If necessary, the Safety Car can reach up to 325 km/h.

The AMG GT Black Series has all the necessary credentials for the tough job with its V8 biturbo dry-sump engine which produces 730 ps. No other road-legal AMG model is currently closer to motorsport than this. That includes the AMG SPEEDSHIFT DCT 7G dual-clutch transmission to the twin-pipe exhaust system made from thin-gauge stainless steel with a titanium silencer. 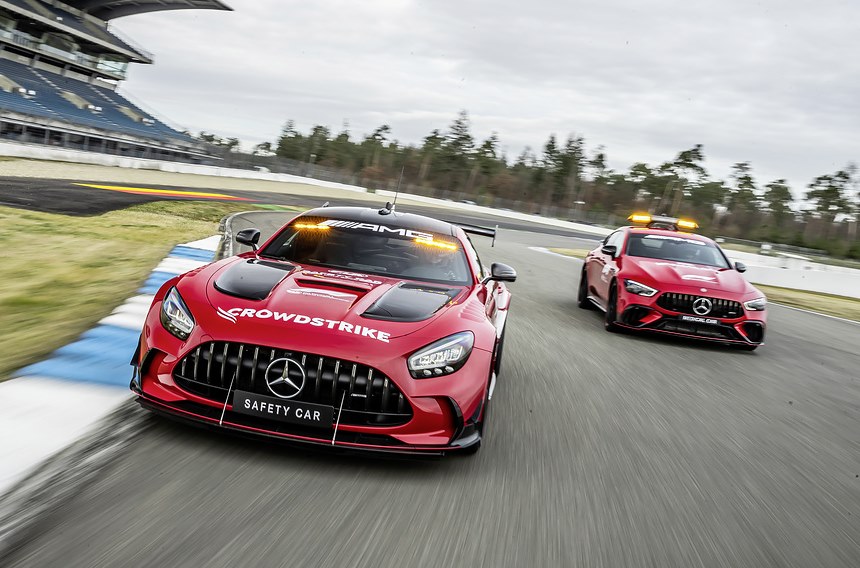 The suspension specialists have engineered a set-up in combination with the Pirelli P Zero tyres that offers the best possible solution for all racetracks and weather conditions. The standard-fit AMG ceramic high-performance composite brakes are exactly the same as those in the regular AMG GT Black Series. The same applies to the finely tuned aerodynamics with a large front skirt, additional flaps, a bigger front splitter and the vertical tear-off edge on the rear skirt. Together with the two‑blade rear wing with an additional, electronically controlled flap, the aerodynamics provide the AMG GT Black Series with optimum downforce and balance.

The new Official F1 Medical Car
The Mercedes-AMG GT 63 S 4MATIC+ makes its Formula 1 debut as the second official car – taking over from its predecessor, the C 63 S AMG Estate. With an equally important role, it is on standby for rapid emergency response and is crewed by up to 3 medics, including the FIA’s Medical Rescue Coordinator, Dr. Ian Roberts. Occupying the back seats are either one or two local medics who come from a specialist clinic close to the racetrack. 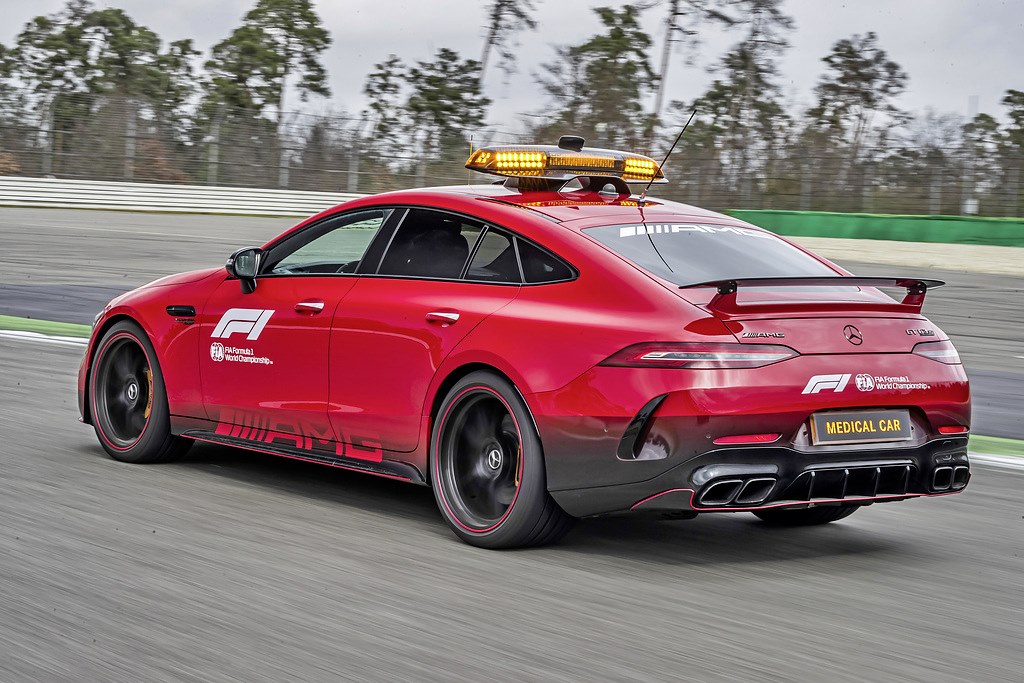 The medical car follows the racing cars as they take off at the start and around the track during the first lap. This is because the cars are particularly densely packed in this critical phase of the race. In the event of an incident, this ensures the doctors can reach the accident site as quickly as possible and immediately start administering first aid. During the race, the Medical Car will be on standby in the pitlane alongside the Safety Car.

To make sure no time is lost in the event of an emergency, the new Medical Car has maximum performance capabilities. Its 4-litre V8 biturbo engine delivers 639 ps and can accelerate the 4-door coupe from 0 to 100 km/h in 3.2 seconds, with a top speed up to 315 km/h. Unlike the C 63 S which had only rear-wheel drive, the new Medical Car has fully variable AMG Performance 4MATIC+ all-wheel drive which guarantees optimum traction, especially in wet and slippery conditions. 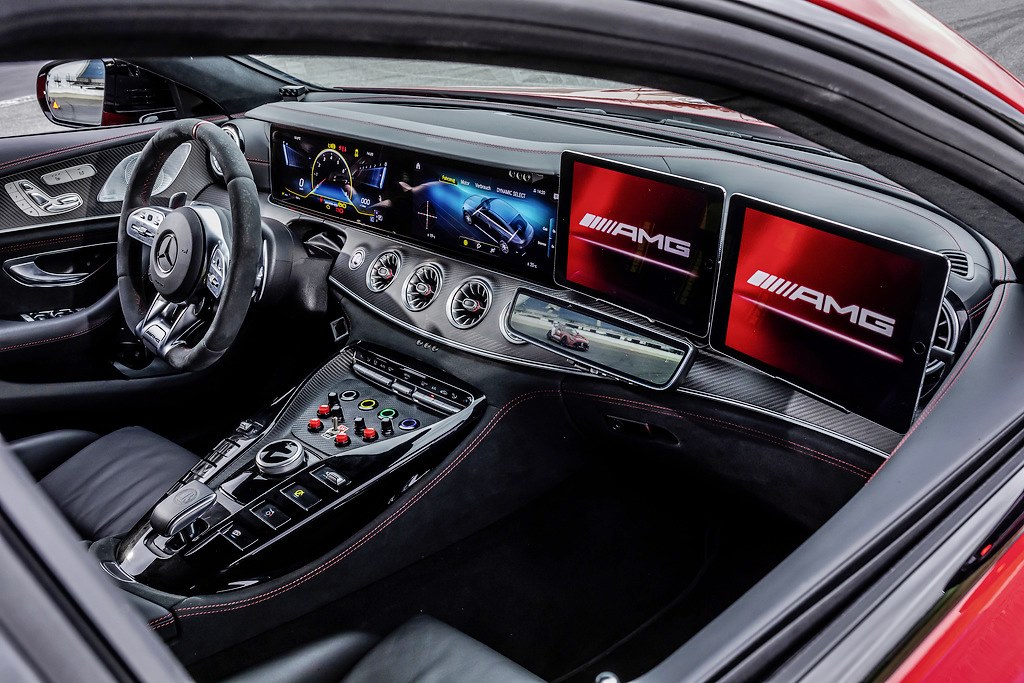 In terms of appearance, the medical car differs from the standard production car largely due to the distinctive FIA and F1 logos and the light bar on the roof. It is mounted on a carbonfibre scoop designed to offer the lowest possible wind resistance. At the same time, it optimizes the airflow towards the fixed rear wing.

Inside the spacious boot is the full set of emergency equipment, including defibrillator, breathing apparatus, rescue cutter and two handheld fire extinguishers. When the rear lid is open, additional flashing lights signal a warning to the racing cars if they are still circulating on the track behind the Safety Car. 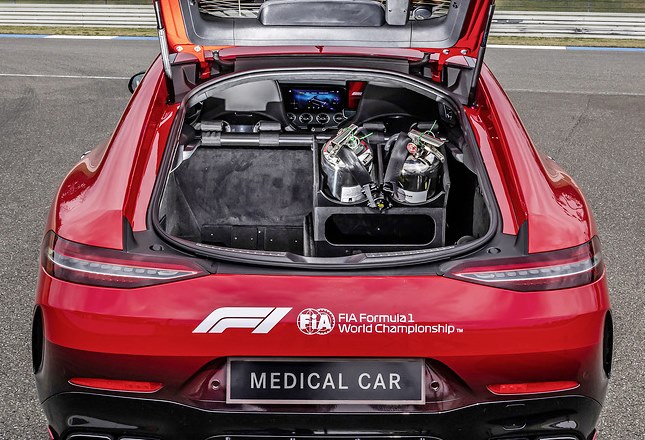 All F1 racing drivers wear special gloves equipped with sensors in the pinkie finger to monitor their vital signs. In an emergency, the paramedics in the Medical Car can receive information in real-time on one of the screens telling them the current pulse rate or blood-oxygen level of the casualty. This enables them to coordinate effective and targeted first-response measures. 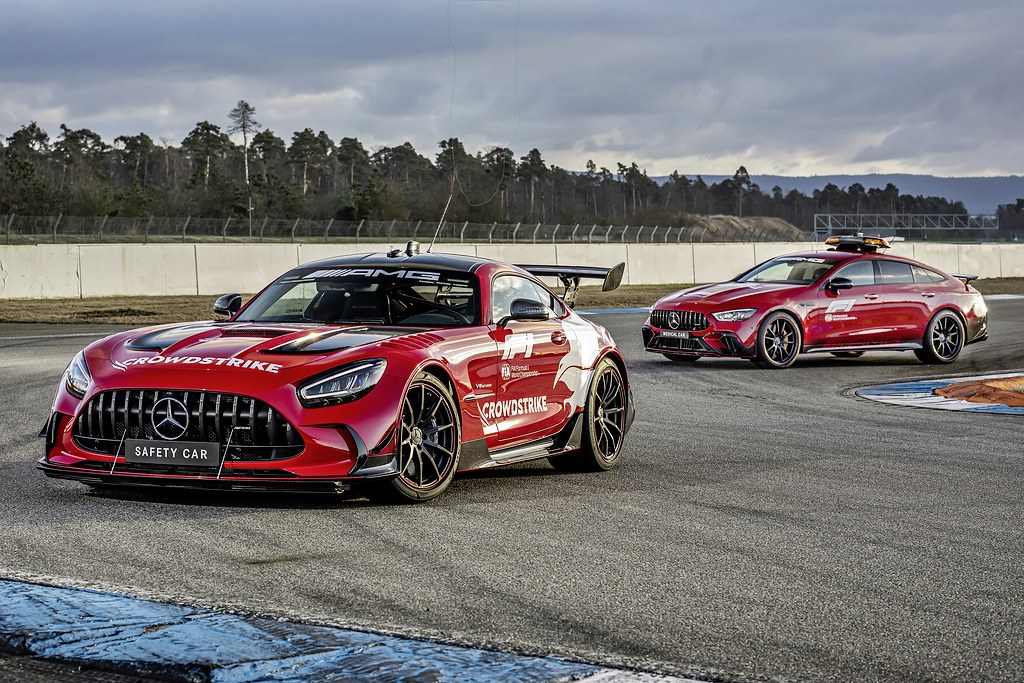 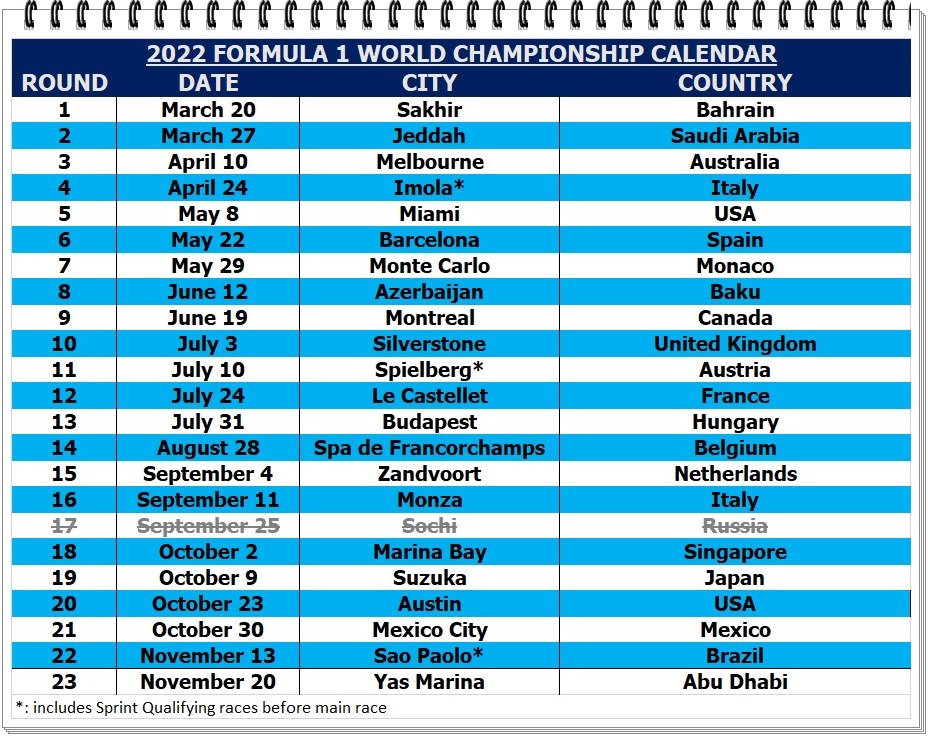