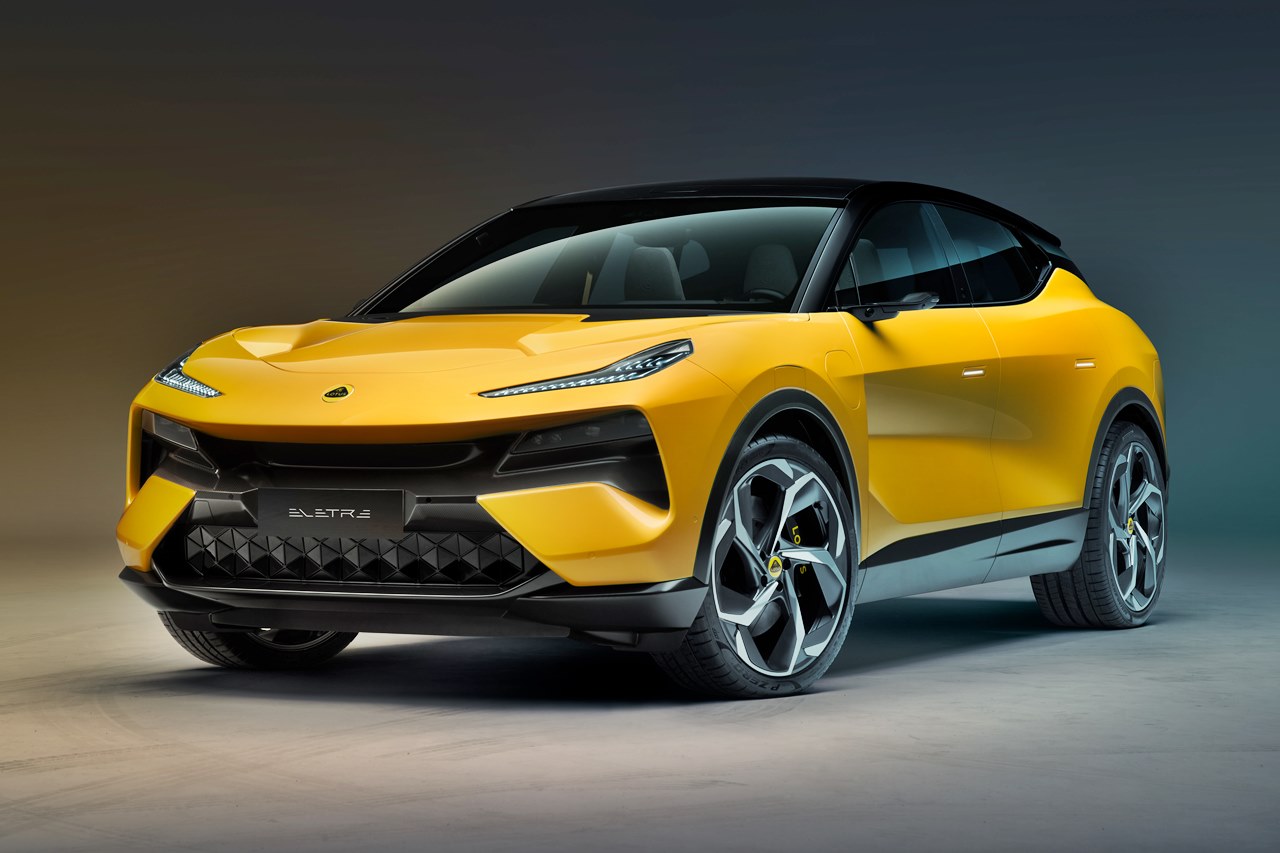 Lotus has finally joined the SUV crowd with its new Eletre (pronounced ‘El-etra’ and means ‘Coming to Life’ in some Eastern European languages) which is not only its first SUV but also the world’s first fully electric hyper SUV. Officially launched tonight at the BBC Television Centre in London, the model brings with it a significant number of firsts for the British brand – the first 5-door production model, the first model outside sportscar segments; the first lifestyle EV; and the most ‘connected’ Lotus ever.

As would be expected, advanced technologies are found throughout the car, including the most advanced active aerodynamics package claimed for any production SUV. There are also intelligent driving technologies such as the world’s first deployable Light Detection and Ranging (LiDAR) system in a production car. 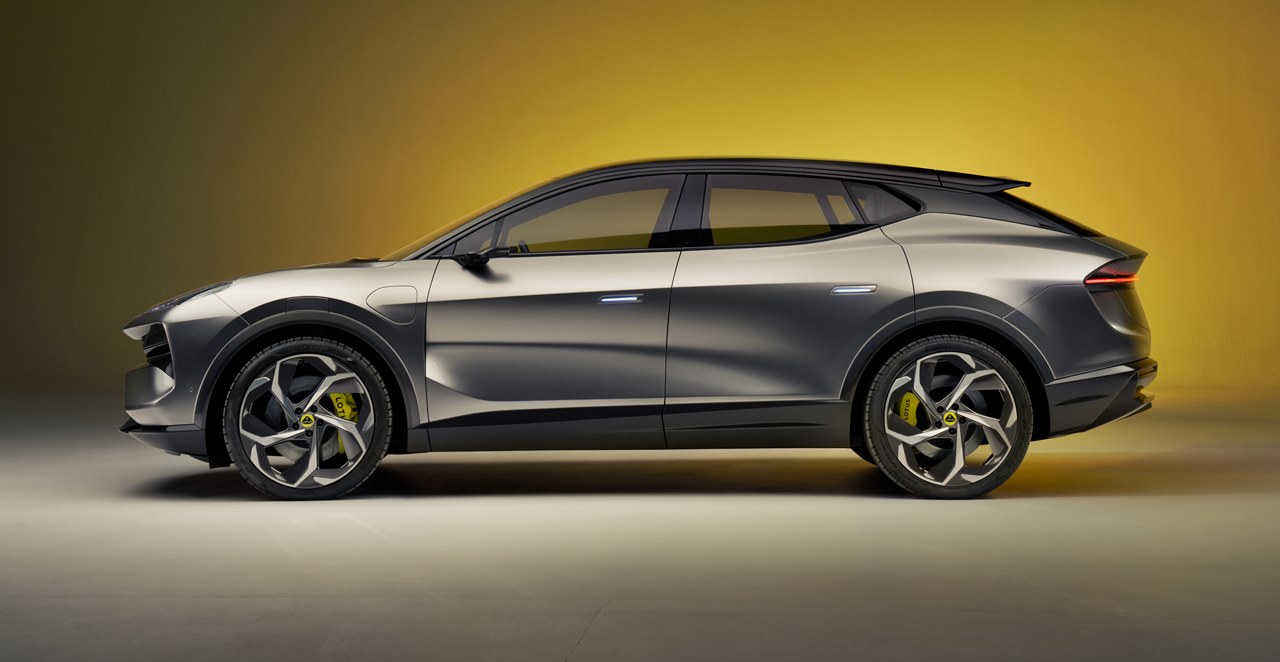 The Eletre is built on Lotus’ all-new Electric Premium Architecture (EPA). The low-to-the-ground design endows it with outstanding handling, and the EPA can easily adapt to accommodate C+ to E+ vehicle class battery sizes, motors, component layouts and intelligent driving technologies. The platform will be the basis for an all-new range of premium lifestyle performance electric vehicles from Lotus.

The Eletre has a 4WD drivetrain with 2 electric motors that provide up to 600 bhp, and uses 800V dedicated electric vehicle architecture with integrated, high-voltage power distribution system. The high-density battery pack has a capacity that’s over 100 kWh and a full charge is expected to last for up to 600 kms. A 350 kW charger will provide 400 kms of range in just 20 minutes, and it also comes with the ability as standard to accept 22 kW AC charging (if available). The hyper SUV credentials come from claimed performance numbers of less than 3 seconds for 0 to 100 km/h and a top speed of 260 km/h. 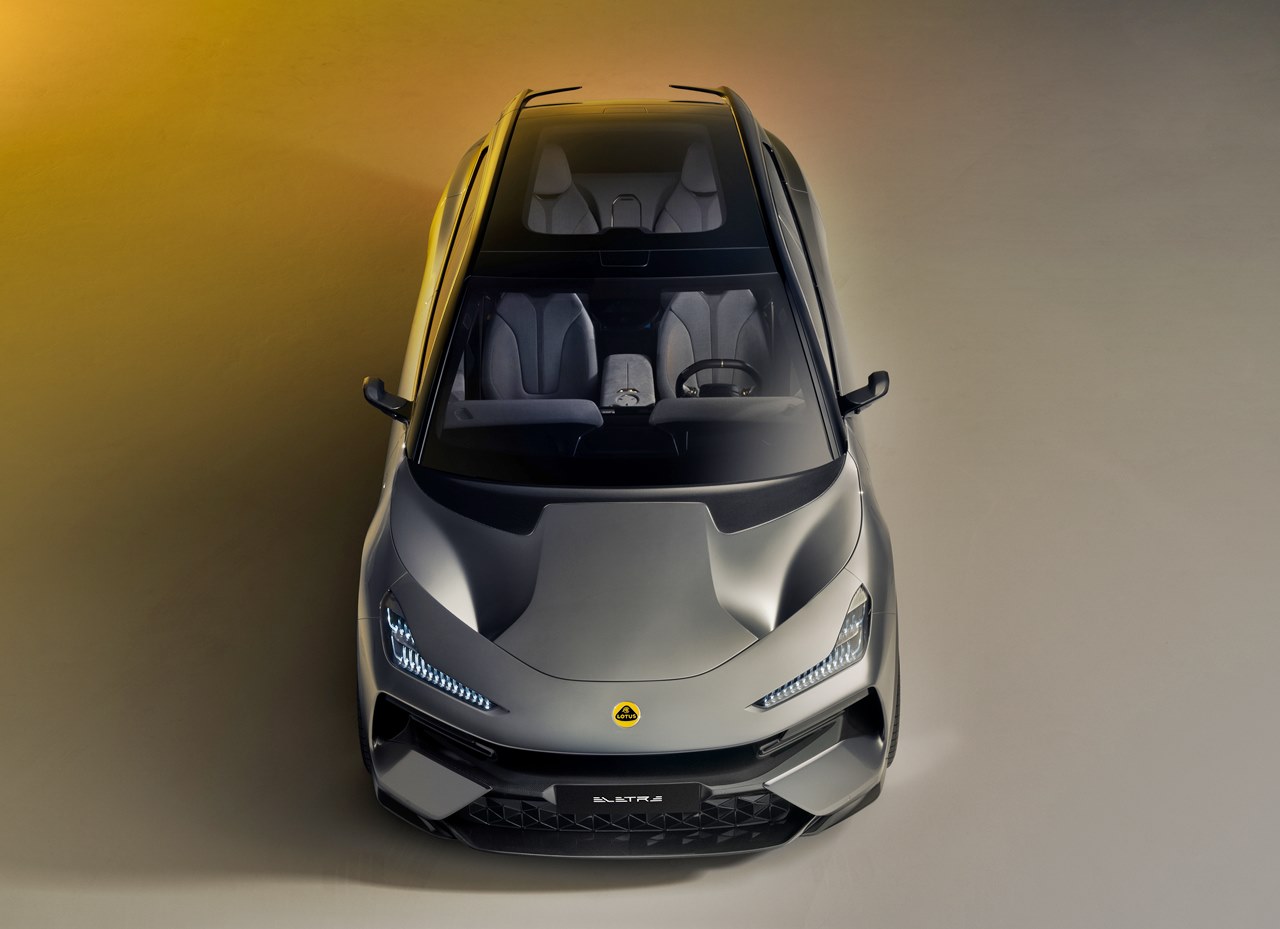 The international design team was guided by Peter Horbury, who became Senior Vice President, Executive Advisor, Design, of Group Lotus last August. Horbury was the man who ‘threw the box out’ at Volvo when he designed the C70 and prior to moving to Lotus, he provided guidance for various brands in the Geely group which Lotus is part of.

The designers created a daring and dramatic new model with a cab-forward stance, long wheelbase and very short overhangs front and rear. They had newfound creative freedom with the absence of a combustion engine under the bonnet, while the short bonnet echoes the styling cues of Lotus’ iconic mid-engined layout.

A signature element of the 5103 mm long bodywork’s design is its ‘porosity’ – the aerodynamic principle of air flowing through the car as well as under, over and around it. Porosity was at the heart of the Evija’s design, is integral to the Emira, and has provided clear inspiration for the Eletre. It is most obvious where air is channelled under the leading edge of the car, emerging through two exit vents in the bonnet above. 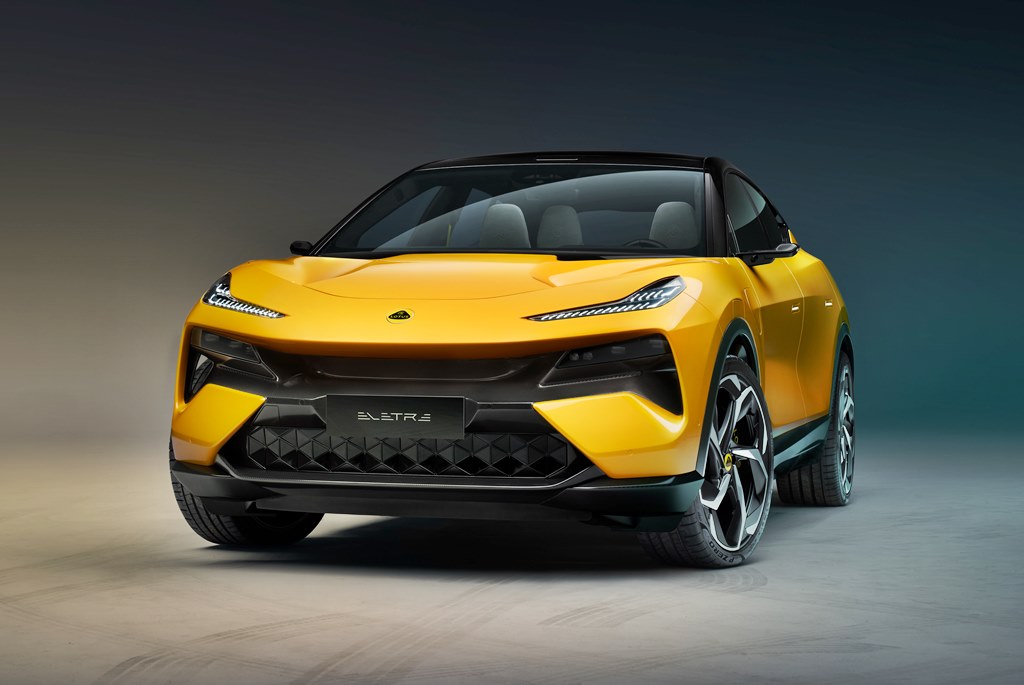 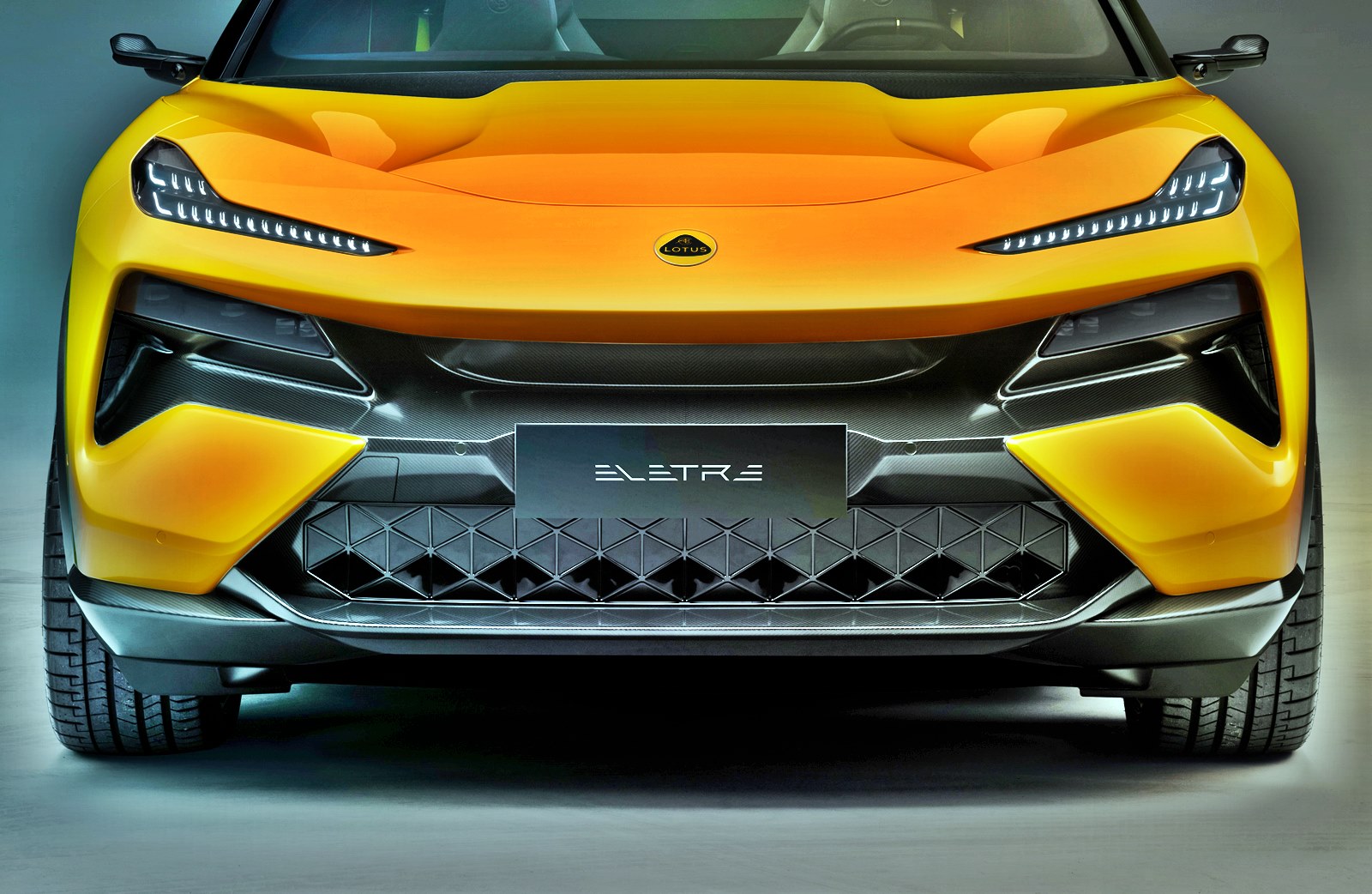 The active front grille is formed from a network of interconnecting triangular petals that dominate the central section. Intricately designed, they remain closed when the car is at rest or when there’s a need to reduce drag during driving. They open in a distinctive pattern to feed air into the radiator, allowing the Eletre to ‘breathe’ when cooling of the electric motors, battery pack and front brakes is required. All the black components are finished in carbonfibre while the body panels are aluminium.

The rear is dominated by the unique cantilevered carbonfibre ‘floating’ split roof spoiler, a motorsport-inspired design feature that evokes race car winglets. With the central section removed, weight is saved – a very Lotus concept – and allows the LiDAR sensor to be integrated at the top of the glass. Optimised for exceptional aerodynamics, the roof spoiler channels airflow down the glass and into the active tailgate spoiler which is deployed automatically at speed. It has three distinct deployment angles, depending on the drive mode selected. 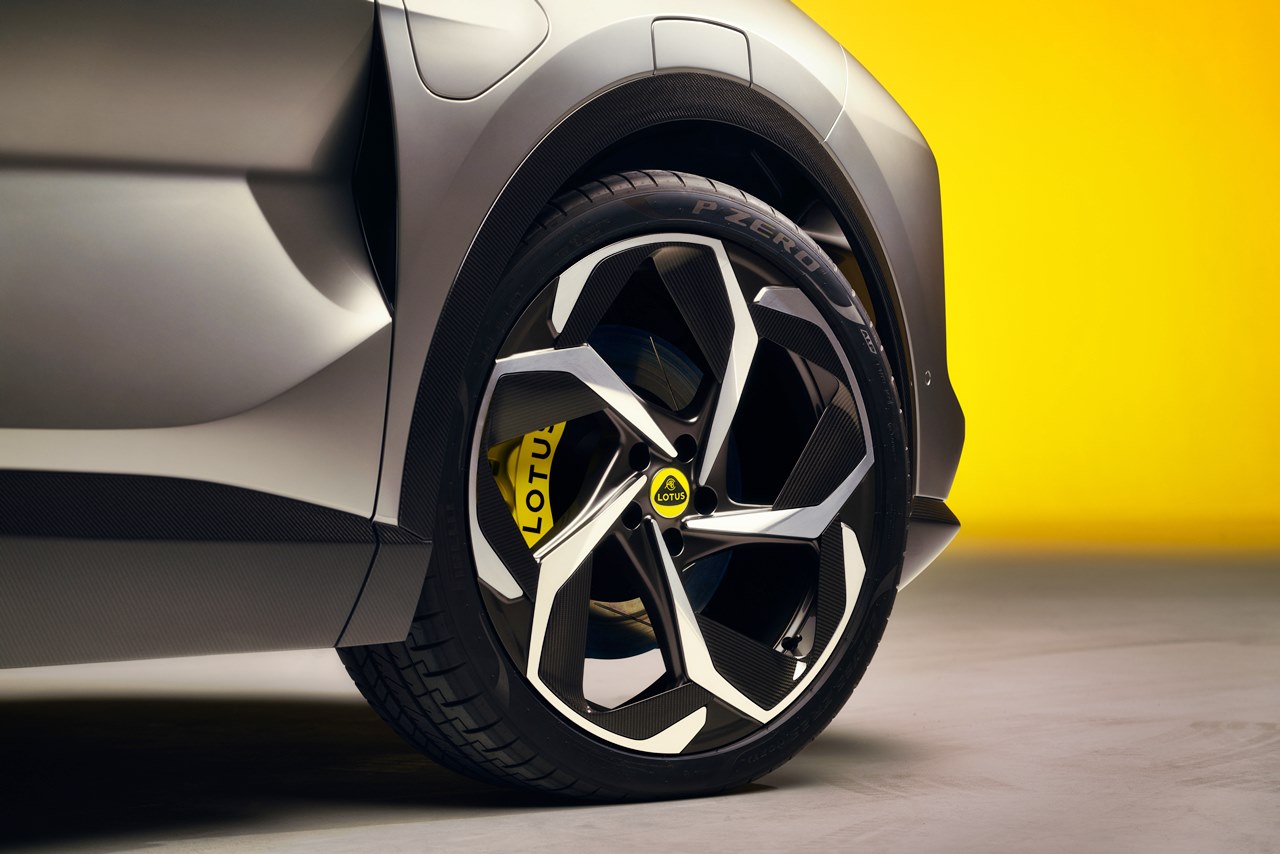 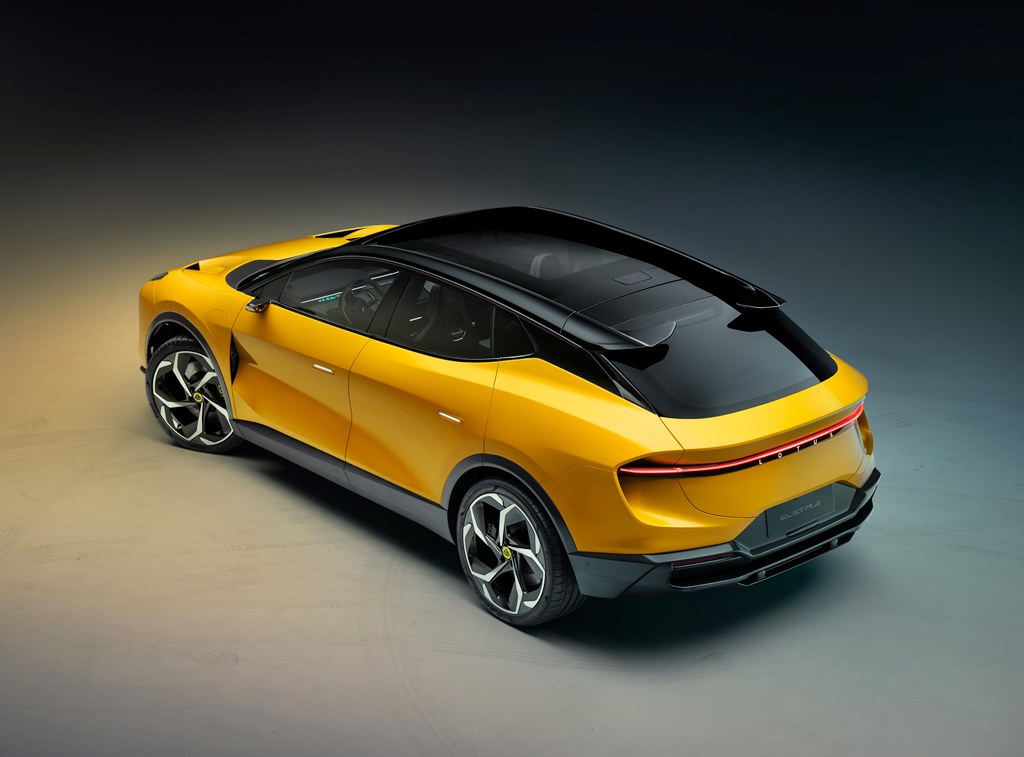 The interior has a performance-oriented and technical design which is ‘visually lightweight’ and as former F1 driver Jenson Button (who drove the car in for its debut) said, it has ultra-premium materials to offer a level of luxury that is new to Lotus. Sustainability has also been a core focus of the design team with the hard materials of carbonfibre that give a premium marble-like finish. 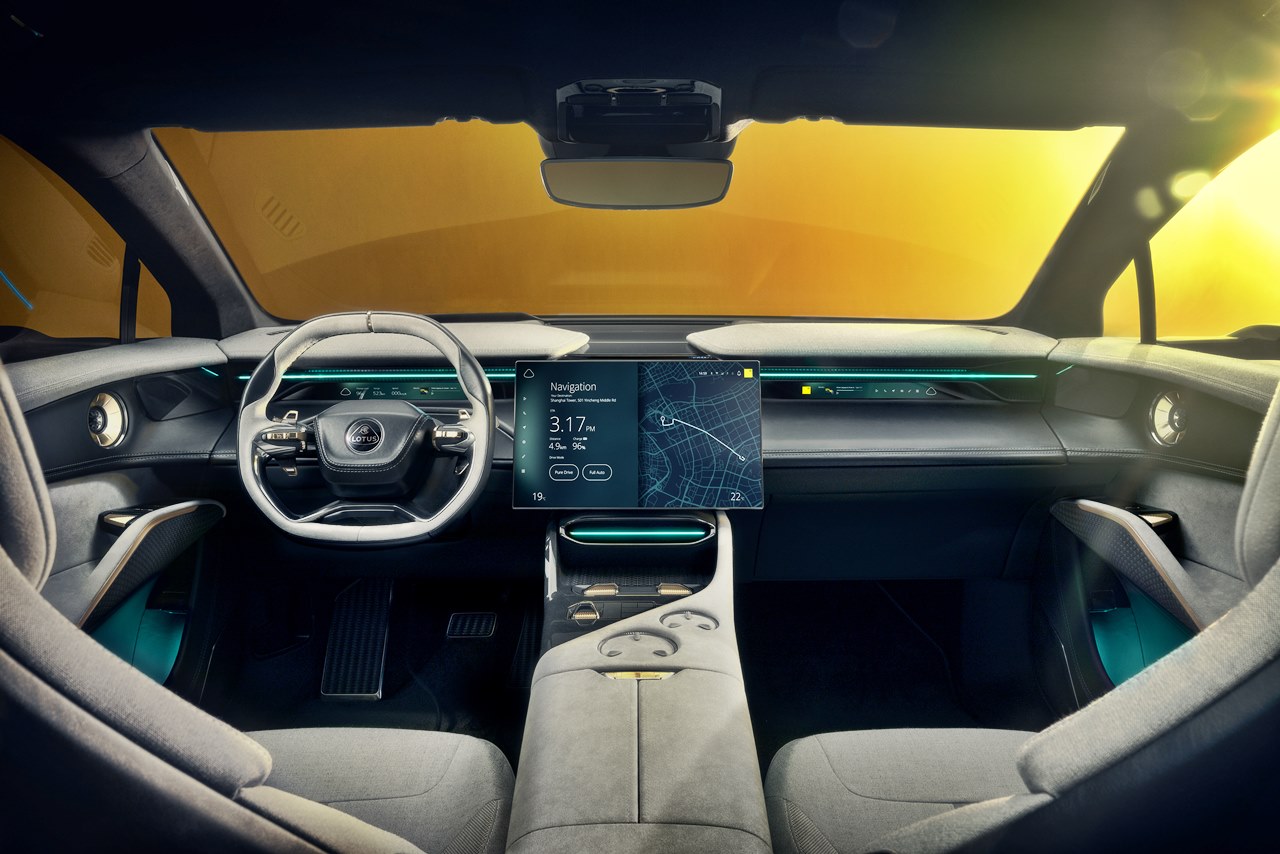 The cabin has four individual seats as standard, with customers also offered the more traditional 5-seat layout under a fixed panoramic glass sunroof. The cockpit and high centre console are inspired by the Emira and Evija with the triangular theme seen externally on the grille being replicated in multiple locations around the cabin.

The Lotus philosophy of light-weighting – removing material if it’s not needed – is clearly illustrated in the instrument panel. The floating wing’s central section has been taken out, echoing the design of the rear spoiler. Below the instrument panel a blade of light runs across the cabin, sitting in a ribbed channel that widens at each end to create the air vents. While it appears to be floating, the light is more than decorative and forms part of the human machine interface (HMI). It changes colour to communicate with occupants, for example, if a phonecall is received; if the cabin temperature is changed; or to reflect the vehicle’s battery charge status. Information can also be displayed to the driver via a head-up display featuring augmented reality (AR) technology. 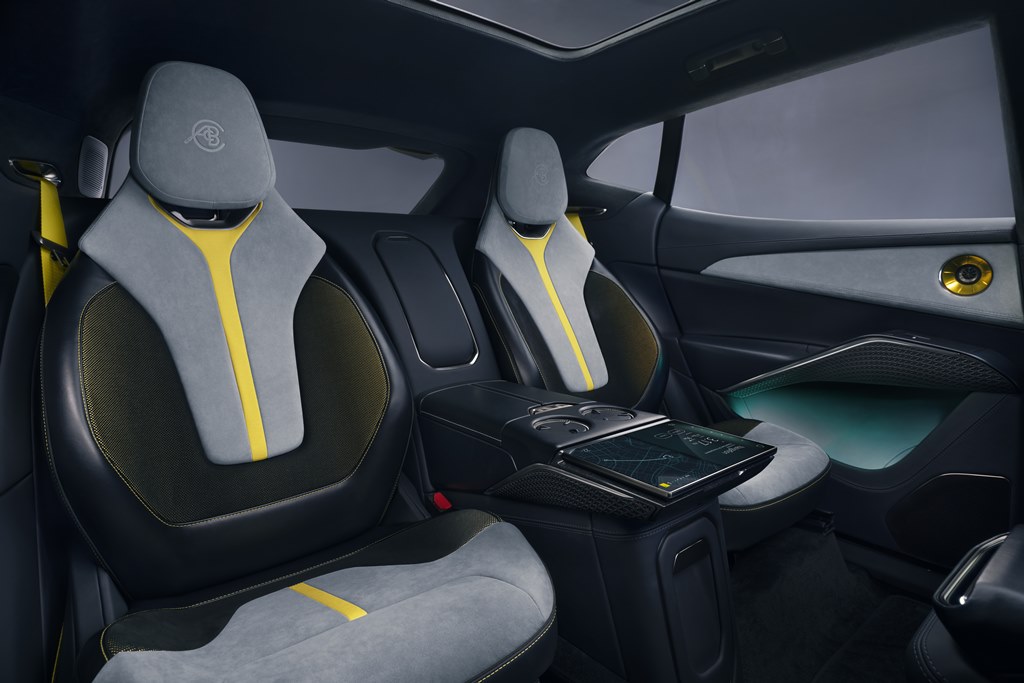 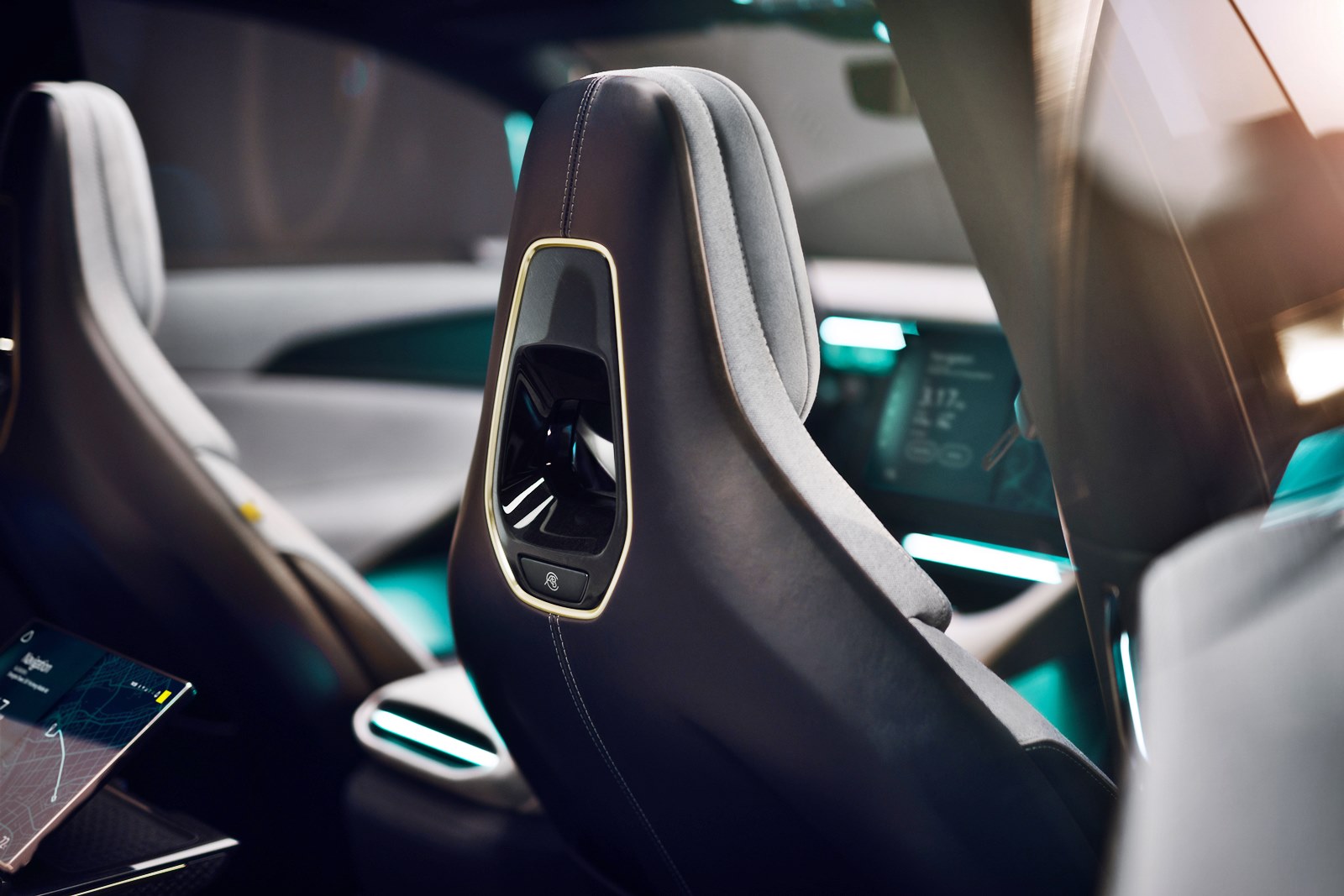 The infotainment experience is said to set new standards in the automotive world, with pioneering and innovative use of intelligent technologies. It is a collaboration between the design team in England and the Lotus team in China, who have huge experience in the fields of User Interface (UI) and User Experience (UX). At the core of the Eletre’s UI/UX is the Lotus attribute of simplicity, which is realised through three pillars: lightweight (for both system components and the experience); intelligence (system versatility); and immersive (for interactions that excite and engage occupants). This includes the on-screen 3-dimensional world in which the car is viewed, showcasing the Eletre as the hero and adopting user experiences from the worlds of gaming and mobile technology.

While every element of the Eletre can be controlled digitally, certain key controls are duplicated with analogue switches – evidence of the simplicity for which Lotus is famed. The technical look, compact size and premium feel of the steering wheel is intended to deliver maximum comfort, performance and usability. Visually lightweight, it houses switchgear for the adaptive cruise control and infotainment system. 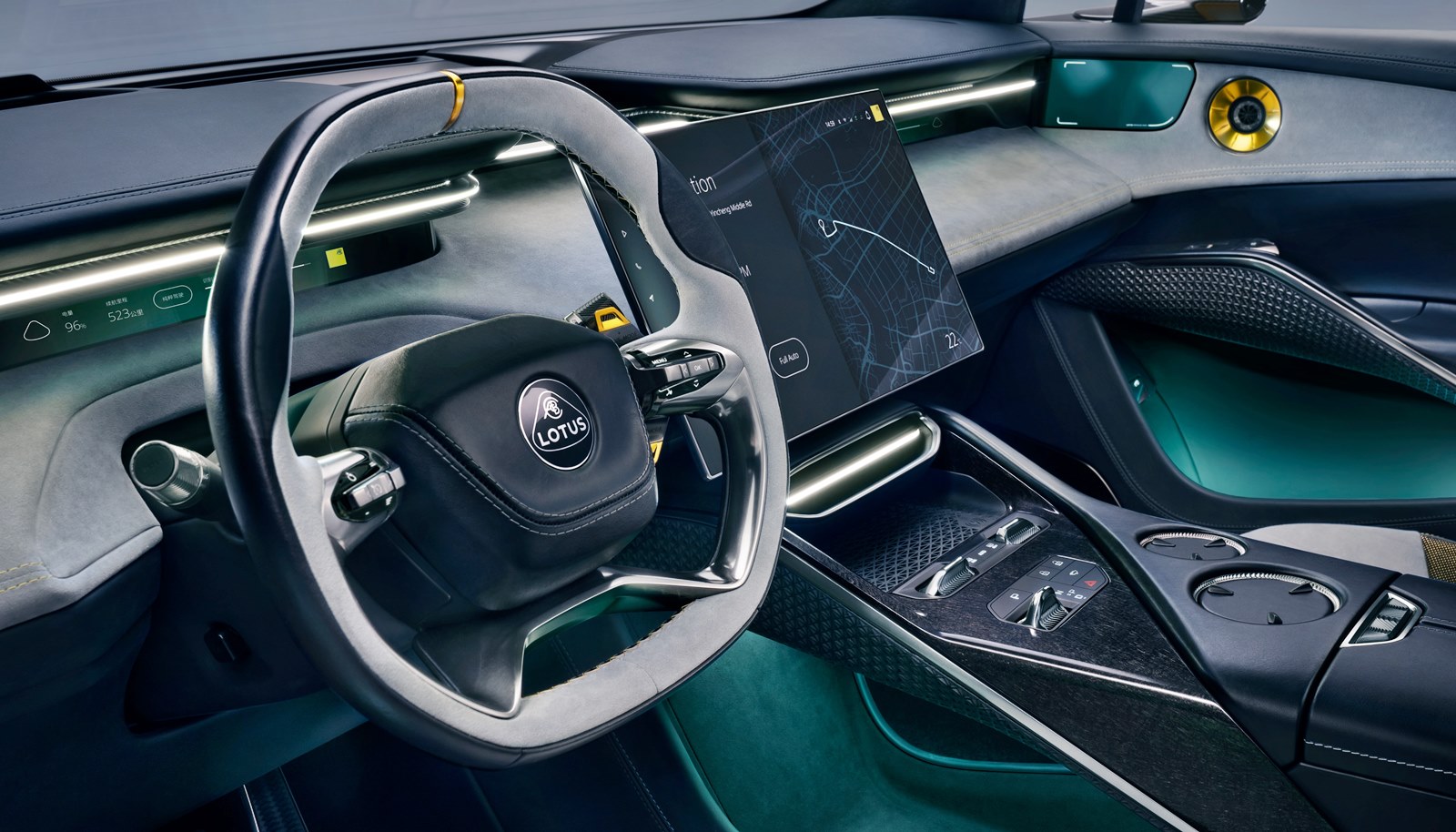 The standard audio system on the car comes from KEF and is composed of a 1,380W 15-speaker set-up with Uni-QTM and surround sound technology. Uni-Q dispenses with separated tweeter and mid-range speakers, instead combining both into an acoustically idealised single unit. It covers the entire mid and high-frequency sound spectrum from a single point in space, delivering a more coherent, hyper-realistic sound experience.

Technology is used for much more than infotainment on the Eletre. It is also at the heart of the car’s comprehensive suite of intelligent Advanced Driver Assistance Systems (ADAS), many of which are designed to be futureproof so new features can be enabled via Over The Air (OTA) updates. Several utilise the LiDAR system which supports end-to-end autonomous driving technology and is future-proofed for further development, achievable because of the hardware that’s already integrated. Further capability can be added via OTA software updates, as and when it is allowed by local market regulations.

Incidentally, each door mirror is replaced by an Electric Reverse Mirror Display (ERMD), which houses 3 different cameras – one for the rearview mirror, a second to help create a 360-degree view of the car from above to aid parking, and a third that’s part of the intelligent driving technologies which work in tandem with the LIDAR system. 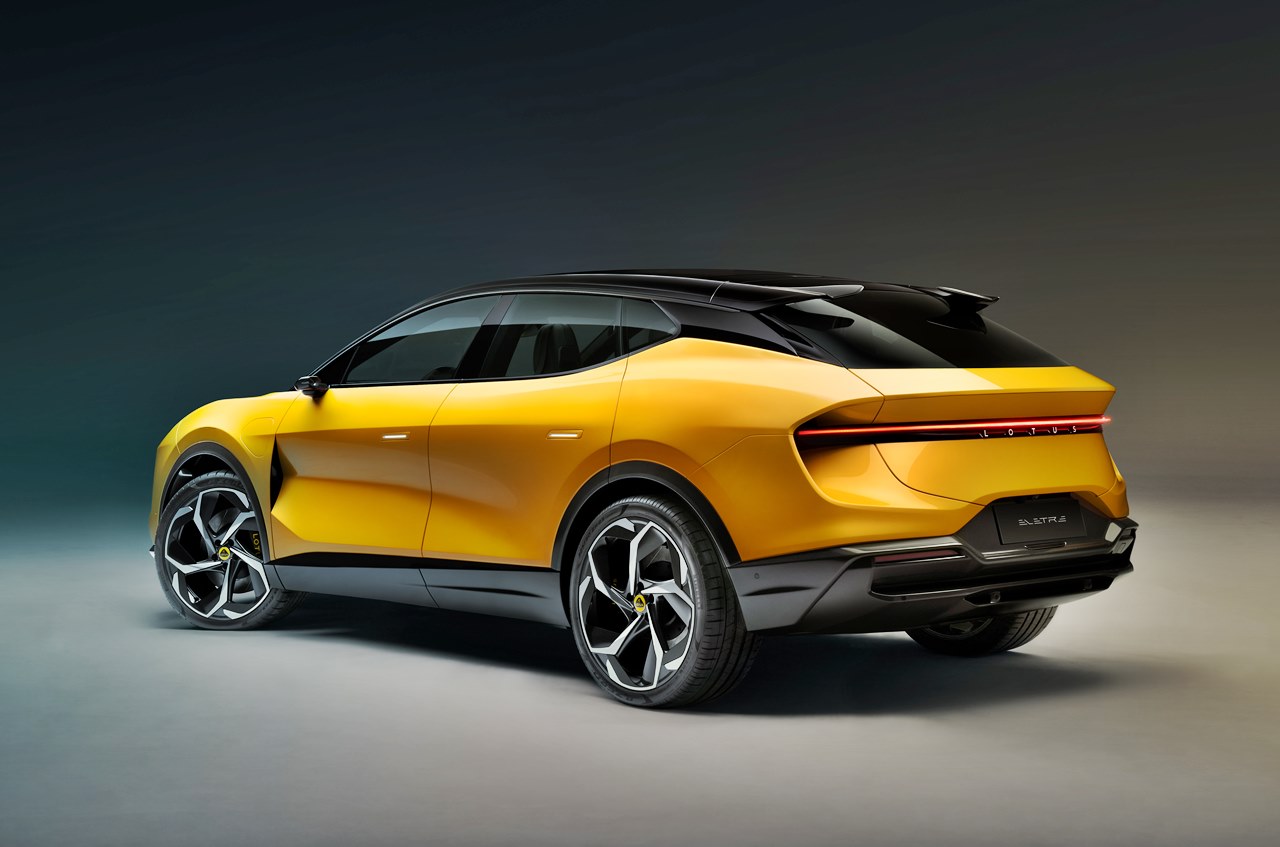 “The Eletre is a bold and revolutionary new car, delivering on our commitment to move Lotus into completely new automotive segments as we widen our global appeal and accessibility. This is a momentous point in our history and a clear signal of our ongoing desire to transform our business. It is a true Lotus, and we’re confident it will delight performance car customers and offer a distinct alternative to the segment’s established players. The Eletre has the soul of a Lotus and the usability of an SUV. Alongside the Emira sportscar, this is the perfect two-car garage from Lotus,” said Matt Windle, Managing Director of Lotus Cars.

Pricing is not announced at this time and the Eletre will be built at a new factory in Wuhan, China. First deliveries start in 2023 with the early production going to customers in China, the UK, and Europe.