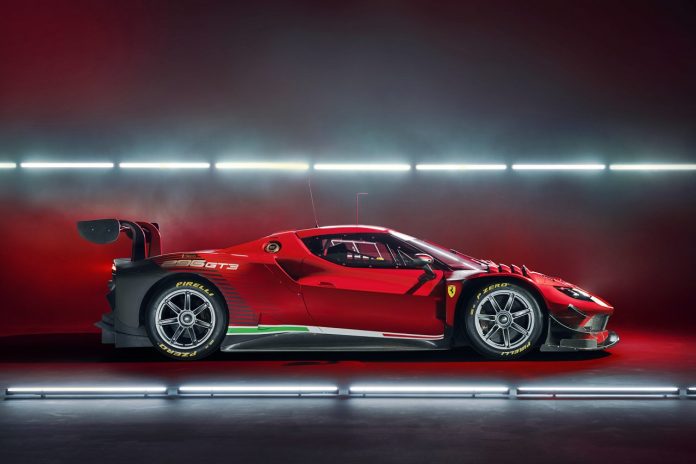 Ferrari has unveiled its 2023 contender, the 296 GT3, at Circuit de Spa-Francorchamps in Belgium ahead of this weekend’s TotalEnergies 24 Hours of Spa race. The 296 GT3 was developed with extreme use in mind, typical of the Pro classes, but also for gentlemen drivers, for whom racing is first and foremost about having fun.

The entire Ferrari 296 GT3 project concept emerged in 2020 and went live with the first simulations and simulator models. Then came the indoor testing, which defined the car’s aerodynamic shape in the wind tunnel, the bench-tuning of the engine and rigidity testing the chassis. The car finally completed the endurance tests in Maranello’s 4WD Dyno. Since the first shakedown at the Fiorano track on April 12, 2022, the new Ferrari has completed tens of thousands of kilometres preparing it for racing.

This is the first modern-day Ferrari GT that has been designed and developed completely in-house and is the mid-engined successor to the 488 GT3 Evo 2020.  ORECA will put together the 296 GT3 as well as provide parts support for customers.

The Ferrari 96 GT3 grew out of the 296 GTB, the latest evolution of the company’s two-seater mid-rear-engined sports berlinetta concept. It’s a new approach in terms of design, car management at all stages of a race weekend, electronics, and even the engine architecture, a 120° turbocharged 6-cylinder (600 ps/710 Nm) – in compliance with the new GT3 regulations.

This new model marks the return to the track of a 6-cylinder-engined Ferrari even though, in compliance with technical regulations, it doesn’t have the electric unit featured in the 296 GTB. Like its road-going twin, the positioning of the turbos is inside the vee. All this brings significant benefits in terms of compactness, lower centre of gravity and reduced mass

The gearbox of the 296 GT3 is new and specially developed for this car. The designers opted for a single-disc clutch unit with 6 gears, arranged transversely for better aerodynamics and weight distribution. Clutch actuation is now electronic and can be controlled from the steering wheel, rather than mechanical via the foot pedal, while the gear change is electrically actuated.

The car’s design, minus the aerodynamic devices or features specific to the racing version, has retained its connection to the production model. The Ferrari engineers have been able to define an aerodynamic configuration within the homologation performance window by reducing ride height sensitivities with the aim of improving handling and driveability. This precise and detailed work on the shapes yielded a gain of 20% in downforce on the car over the previous generation.

Development of the cabin design was done without neglecting essential aspects such as safety and comfort. In endurance racing, performance depends on these features. The cabin was completely redesigned over the 488 GT3, in response to input from factory drivers and customers. The result is a cockpit that allows its occupant to quickly and effectively find the best driving position, with the main functions always within easy reach.

Many controls and functions have moved to the new Formula 1 single seater-inspired steering wheel, while the position of the Sabelt seat provides optimal visibility, both day and night. It also adds a new level of comfort for drivers of different sizes and statures who can use the adjustable pedals and steering to find their best position in the car. The air conditioning system and airflow inside the cabin were designed to provide adequate ventilation in all conditions, helping the driver to concentrate during every stage of a race.

While the 296 GT3 chassis draws on the experience of the 488 GT3, it is entirely new and is made of aluminium. It allows the car to exploit the grip potential offered by the tyres without compromising their integrity in just a few laps, benefiting performance and repeatability. The chassis’ extreme lightness, which in the 296 GT3 also allows better and more efficient ballast management, contributes to this. The safety structure has been carefully designed using the most sophisticated simulations and innovative technologies and research, especially in alloys and materials.

The 296 GT3 has a longer wheelbase than its road-going counterpart, within the regulatory limits, and a different suspension design to the 488 GT3, with dedicated kinematics and structures. The double wishbone arms in the front and rear suspensions are designed to offer maximum grip even at high speeds, limiting stress on the tyres as far as possible, to the benefit of tyre life, performance and reliability. The suspension, like the anti-roll bars, features the widest possible range of settings providing drivers with the best possible setup.

Ferrari is still working on the pricing which will be available towards the end of the year. The first customer teams will get their cars late in the year but in time for them to prepare for the debut race which will be the 2023 Rolex 24 at Daytona.