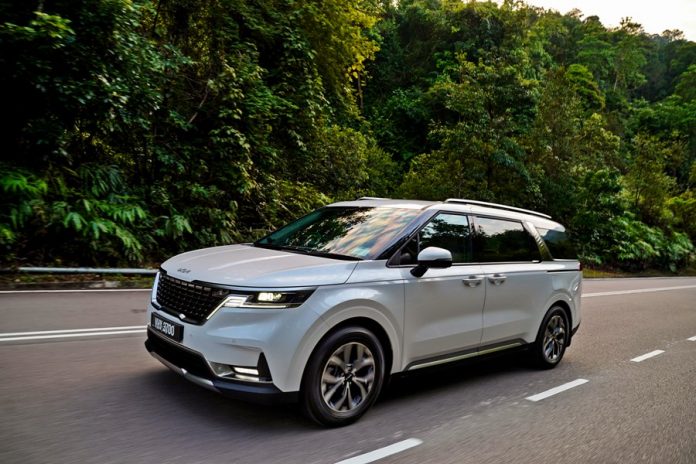 The new locally-assembled Kia Carnival shows how Korean design has come a long way in 50 years, having started with adapting foreign models (under licence) and then trying to design their own cars. They tried to be different, seemingly for the sake of being different and there were strange forms and shapes which were unnecessary. After realizing there was no need to ‘reinvent the wheel’, they began to get experienced foreign designers – the best known being Peter Schreyer who gave Kia a recognizable identity.

From having foreign designers, they also opened design studios in Europe and America where their designers could be immersed in the markets that they were developing products for. As a result, the designs today are original and appealing, without the oddities of trying to be different.

New design approach
In the case of the new Carnival, the design originated from Kia’s studio in California which has been in existence since 2008. It’s therefore not surprising that the design is polished, of high quality and has a unique combination of MPV and SUV. In fact, Kia designers have coined the term ‘GUV’ – for Grand Utility Vehicle – to reflect a slightly different class of MPV.

While it has the long monoform of a people-carrier, it doesn’t have the bulkiness and has styling elements that make it look like a long SUV. Besides the lifted front top of the bonnet to give the feel of a large SUV, a skidplate on the bottom edge of the front and rear bumpers are elements which give the SUV-like impression.

The headlamps don’t have conventional covers, with each of the DRLs and lighting elements being separate. The appearance is a bit futuristic, which also gives originality to the Carnival’s design. The grille, sized proportionately to the vehicle, is quite a simple execution which looks like the ‘Tiger Nose’ has finally evolved away from its familiar look.

Most MPVs have a pretty dull side view but the Kia designers have given the Carnival a more eye-catching and sporty appearance here. Apart from the ‘floating roof’, the tapered and angled C-pillar provides a unique look, and the texture garnish adds a touch of class too. The texture is also found on the dashboard trim, contributing to the premium image that Kia is aiming for.

2.2-litre Smartstream turbodiesel
Like the imported version we drove earlier, the locally assembled Carnival also has a turbodiesel engine and it is the same all-aluminium 2.2-litre Smartstream 4-cylinder unit. With high-pressure commonrail fuel delivery (Euro5 B7 biodiesel), it develops 199 bhp/440 Nm, with the strong torque available from 1,750 rpm.

The engine is mated to a conventional torque converter automatic transmission with 8 speeds. There’s no conventional lever for selecting transmission positions; instead, a large E-Shift knob (with a high quality finish) on the centre console is rotated to select the R, N and D positions. Manual selection of gear can still be done using paddle shifters on the steering wheel. The PARK position is easily selected by just pressing the button in the middle of the knob. It’s probably the way transmission control will be in future but for now, some might still miss a lever.

There are also drive modes for quicker acceleration or better economy as well as a SMART mode which is adaptive. It learns the behaviour of the driver and gradually adjusts the characteristics to suit the driving style. Over time, the driver will find the transmission operating smoothly and almost predictably. However, a different driver who takes over may not necessarily like that character and if this new driver uses the vehicle for a long period, then it will gradually change to his or her style. Perhaps then there should be a ‘memory’ function to store preferred characteristics, just like seat positions.

Spaceship-inspired interior
The interior is where the new Carnival impresses, and not just with spaciousness that would be expected from its exterior dimensions. The designers have created a more premium image and feel to the cabin with convenience features for everyone on the three rows. The interior designers were inspired by the minimalist yet elegant spaceship interior in the classic 1968 movie ‘2001: A Space Odyssey’ so their initial idea was a family vehicle for going on space travels! Even the dashboard panoramic display that stretches across the driver’s side is intended to give the feeling of being in the cockpit of a high-tech spaceship.

The spaciousness is enhanced by the large windows, especially on both sides of the second row. There’s a panoramic view of the world passing by and with the High version, there are also dual sunroofs overhead to make things feel even more airy.

Versatile seating a strong point
By far, it was the seating that attracted a lot of attention with its variability. As mentioned before, the locally-assembled model is available as a 7-seater or 8-seater, whereas the CBU version we tested in February was an 11-seater. The layout, with maximum people capacity, would be 2-2-3 or 2-3-3. In both versions, the third row folds flat into the floor but for the second row, the seats are fixed in the 7-seater due to the many electrical systems in them. For the 8-seater, they can be adjusted in various ways, turned around the face backwards and even removed completely.

Turning the seats to face backwards requires a bit of work as the left and right side seats have to exchange positions. They are not that difficult to remove and there are security features to ensure that they are locked in place when installed. Most people should be able to handle the task but it’s not something that might be done frequently either.

For the ultimate in comfort, the 7-seater comes with two Premium Relaxion (not a spelling error) seats for the second row. These are wide and when reclined, there is an additional pad that extends forward and up to provide support for the lower part of the legs. Pivoting armrests on the outer side of each seat provide a place to rest the arm while being out of the way when getting in and out.

The seats (which are made locally) have heating and ventilation within and for keeping the entire cabin cool, there are air-conditioning vents on the ceiling over the middle and rear sections. The fan speed and temperature can be controlled separately from the front system but because the panel is situated just behind the driver’s seat (on the ceiling), it can be difficult to reach for most passengers.

The third row, for 3 persons, is quite comfortable, as we found from sitting in the section for about a third of the journey to Penang. You can’t say that of all MPVs but with the Carnival, there won’t be reluctance to go to the back. Legroom is also pretty good and more importantly, even though the seats are over the rear end, there’s no bumpiness.

The powered sliding doors on both sides are a nice luxury feature but to be expected considering the price. Getting into the third row is easy as the second row seats tumble forward, but when getting out, the passenger in the third row might need help as the release handle is right at the B-pillar. Presumably, there will be a driver to help, or someone in the second row will also be getting out.

Enough cargo space for moving house
The standard boot space when the third row is in use is limited but there’s a deep compartment below it for storing items. This, however, means that only a temporary spare wheel can be carried. This is the skinny tyre for emergencies which is lighter and saves space too.

The cargo volume is variable so it depends on what you want to carry. For maximum volume, the third row can be folded into the floor and the second row seats removed. This gives a space that would rival a pick-up truck – and it’s enclosed. So that adds another dimension to the term ‘multi purpose’ as you could probably do house-moving with just the Carnival alone.

Most features are common to all three versions and the extras that the High versions have are the dual sunroof, memory function for the front seats, larger digital instrument panel and a comprehensive suite of Advanced Driver Assistance Systems. There won’t be fighting for USB recharging ports as up to 7 are provided plus a wireless charging pad. The sound system is from Bose and has 12 speakers placed around the cabin. The only thing missing for a family-type vehicle would be a cooler box but that’s something that can be purchased as an accessory anyway.

Driving impressions
At 5 metres long and almost 2 metres wide, the Carnival is an imposing vehicle and for some, it may be intimidating. It would fit right into the landscape in America but in Malaysia, with our narrower roads and tighter congestion, a large vehicle might seem impractical. However, as we discovered back in January when we drove the 11-seater, the size does not mean it is difficult to drive. In fact, when on the move, it doesn’t feel much different from a smaller MPV and there is the added stability of being 2,100+ kgs.

Where you become aware of its bulk is in tight situations, like parking, but even then, it is not as cumbersome as a pick-up truck. The Surround View Monitor is a great help here and we found that parking was a ‘no-sweat’ exercise and the vehicle could be positioned properly within a bay.

Even more surprising is the way the vehicle behaves on winding roads. Apart from the competent chassis design, the low ride height also helps keep the Carnival stable and hardly any lean could be felt. With motor-assisted power steering these days, big vehicles like the Carnival are no harder to drive than small sedans. The feedback is good and assistance is progressive. The body control is certainly light years from what we remember of the original Carnival (the one that was also sold as a Naza Ria) which wallowed when pushed too hard in turns.

The 2.2-litre Smartstream engine provided enough power for brisk motoring but it has also to be said that our two drives did not have the maximum number of passengers aboard and the load was fairly light. With all 7 or 8 seats occupied, perhaps the performance might feel different but as we kept hearing from our convoy leader ‘Enjoy the drive’, and unless you are in a rush, the engine should be able to provide decent performance.

The weight also helps with ride comfort although the pressures were on the high side as the vehicles had come straight from the plant with pressures meant for maximum load. It’s not super quiet in the cabin but the ambient noise level seemed to be consistent. Conversations with people next to you are fine but because the seat rows are far apart, you sometimes have to raise your voice to talk to the drive (certainly if the person right at the back is talking).

Priced (excluding insurance) from RM231,228 – RM261,228, the Carnival is a breath of fresh air in the MPV segment, with smart styling and it has not just a premium image but also the feel to go with it. We would go as far as to say it sets a new benchmark for the MPV class and even those who have not had a liking for MPVs will find the Carnival appealing.