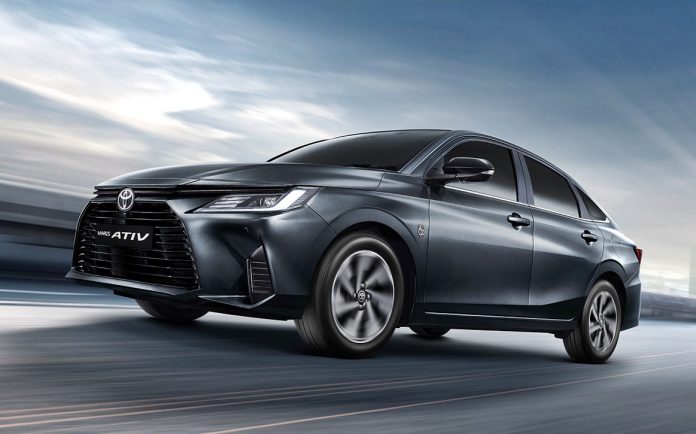 A new generation of the Toyota Yaris Ativ was unveiled in Thailand this evening and while it is known by that name there, Malaysians know it as the Vios, one of the best-selling sedans in the non-national brand segment. With this new DNGA-based Yaris Ativ, the Vios goes into its fourth generation since 2002. To date, around 3.5 million units have been sold worldwide, with a large number in ASEAN.

DNGA – Daihatsu New Global Architecture –is a platform and structure which is used for the smaller models in the Toyota Group which Daihatsu is part off (and which is also extended to Perodua since it is partnered with Daihatsu).

DNGA has been developed with weight-saving approaches while the rigid structure and suspension geometry provide high standards of stability and comfort. Besides giving much attention to aerodynamics, DNGA also provides generous interior space with a quiet environment.

Size-wise, the new Vios (we’ll call it that since the name is more familiar to Malaysians) is almost the same as its predecessor with 5 mm more length, 10 mm more width and an extra 5 mm in overall height. Of greater significance is the widening of the wheelbase by 70 mm to 2620 mm which will have positive implications on handling and stability and more importantly, cabin spaciousness.

For now, only the specs for the Thai Yaris Ativ model are available and the engine fitted is the 3NR-VE 1.2-litre petrol engine which is partly dictated by the need to meet the country’s Eco Car requirement for incentives. This engine produces 94 ps/110 Nm which flows through a Super CVT-i transmission to the front wheels. As is common these days, the driver can choose an Economy or Sport mode, or just leave the engine to run in the default Normal mode.

It’s not known whether Malaysia will continue with the 1.5-litre 2NR-VE unit (107 ps/140 NM) in the current Vios. As the model is assembled locally, it may be possible to use the engine and if we’re not mistaken, it is produced at a factory in Negeri Sembilan. Using the engine would be important for the model to maximise its local content level and get better government incentives to help keep its pricing competitive.

The suspension remains straightforward with MacPherson struts in front and a torsion beam with coil springs at the rear. Some versions come with rear disc brakes as an extra selling point although most engineers will tell you that drum brakes are good enough.

As we’ve seen in the new models launched in recent times, Toyota’s design approach has become more ‘aggressive’ with a bolder appearance. Where appropriate, models are also given a sportier image and in the case of the new Vios/Yaris Ativ, the profile has gained a sleeker fastback style which brings the Cd down to 0.284.

The frontal appearance, now more angular and chiseled, has hints of the larger Camry with the dominant grille. Sequential turn signals and LED headlamps/tail lamps have now come down in price that they can be offered in this class.

With each new generation, the level of quality has risen and texturing is even finer. Adjustable ambient lighting, common in more expensive models, has now trickled down to the Vios and the driver can choose from 64 colours to set the mood for each journey.

The dashboard layout follows current trends with a tablet-like touchscreen display to show infotainment and navigation information. In the middle area of the dashboard are the manual controls for the ventilation and air-conditioning system, a more practical approach than having everything done by just touch.

Over on the driver’s side, the digital instrument panel shows all the operating information (with variable displays) while there are switches on the steering wheel for easy setting changes without taking the hands of the steering wheel.

Depending on the version, the new Vios comes with features such as automatic air-conditioning, a PM 2.5 air filtration system and an electric parking brake. Connectivity with smartphones is easily done with Android Auto or Apple CarPlay.

An extensive Toyota Safety Sense package (which includes Adaptive Cruise Control) is provided to reduce drive workload as well as help avoid accidents. There’s also the Panoramic View Monitor which provides an all-round view and Toyota also has its own DVRs (dashcams) that are installed as standard or offered as accessories, depending on the version.