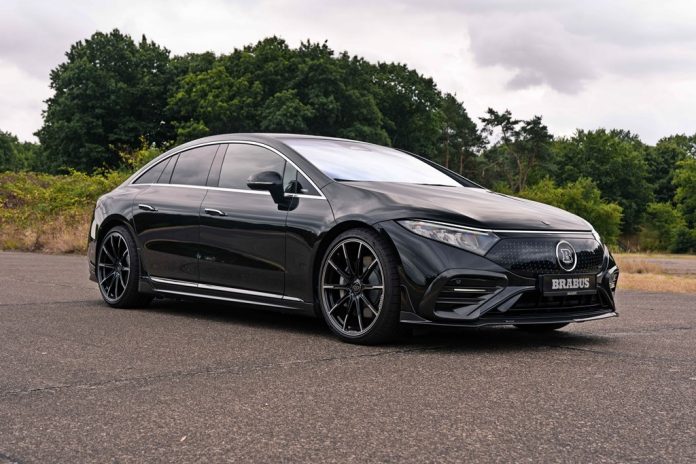 BRABUS is well known for enhancing the looks and performance of Mercedes-Benz models. Thus far, since it began business in 1977, it has doe impressive work with cars with combustion engines. But with the electric age round the corner, the company has also to prepare for the future and it has begun doing so.

Perhaps because its extensive experience is with combustion engines, it has not yet developed comprehensive expertise with electric powertrains so it is not focusing on that area yet. Instead, it is enhancing performance by further optimizing aerodynamic efficiency, which can also have a positive effect on performance.

BRABUS in fact has a listing in the Guinness Book of World Records related to aerodynamics. In 1985, it refined the bodywork of a W124 Mercedes-Benz sedan and brought its Cd down to 0.26. That was a world record at the time and is still a value achieved by only a few, far more modern cars today.

Its first effort in the 21st century is with the latest EQS from the Mercedes-EQ range. Already one of the most aerodynamic production cars in the world, BRABUS has been able to lower its Cd value (the measure of wind resistance) by 7.2%.

Confirmed in wind tunnel testing, the lower drag in turn reduces the driving resistance, which makes it possible to extend the range, which the more streamlined shape increases by 7% on average in the speed range between 100 and 140 km/h.

The refinement done on the EQS bodywork with components produced from carbonfibre (with exposed structure) give the sedan sporty looks that generate the ‘BRABUS 1-Second Wow Effect’. The bodywork components can have a glossy or matt sealed finish.

The BRABUS front spoiler gives the EQS an even more dynamic face. In addition, the carbonfibre lip reduces drag, and its raised outer edges also minimize front-axle lift by 100%. This naturally also improves the handling stability at high speeds.

The carbonfibre trim for the side air intakes in the front fascia also play a role in the more striking face and route the airflow even more purposefully to the radiators and front brakes. The designers also developed carbonfibre air deflection elements installed in front of the rear wheelarches. These add some sporty lines to the sides and positively influence the airflow.

The rear end is enhanced with a diffuser and a spoiler, both made from that same hi-tech composite material. It reduces aerodynamic lift at the rear by up to 40%.

The BRABUS Monoblock wheels have been tailor-made for the wheel wells of the EQS. They are available in numerous designs and diameters from 20 to 22 inches. With the Monoblock M wheels, there is a disc design that is aerodynamically favourable.

The BRABUS wheels not only benefit the looks but also enhance handling. This improvement can be further amplified with the plug-and-play BRABUS SportXtra module which is adapted to the air suspension. It lowers the ride height of the sedan on the front by 15 mm and on the rear axle by 29 mm. This ride-height lowering also plays an important role in the reduction of the drag coefficient.

As with its other models, BRABUS offers numerous refinement options for the interior of the EQS, enabling customers to personalize extensively. The range of options includes scuff plates with backlit BRABUS logo, whose colours change in sync with the ambient lighting; BRABUS aluminium or carbonfibre pedals; high-quality floormats and a velour mat for the boot. The latter two sport the logo of the tuner and feature leather edging.