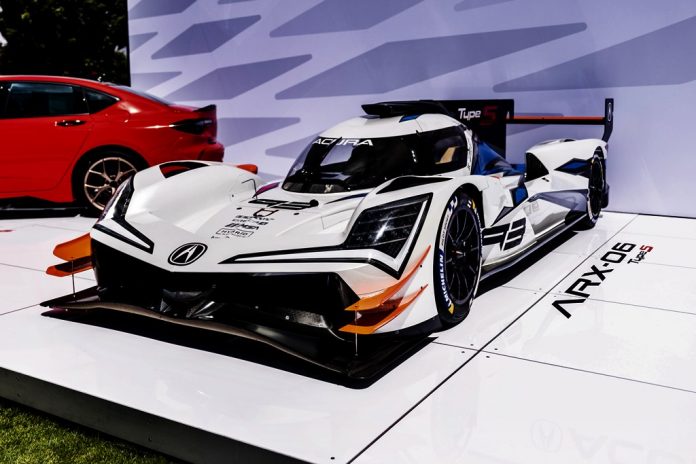 Acura, Honda’s premium and performance brand mainly sold in North America, has had a long presence in endurance racing with prototype models. Next year, at the Rolex 24 at Daytona, it will debut an all-new electrified racing car, the ARX-06, the sixth generation of a successful line of Acura endurance racing prototypes.

The ARX-06 has custom bodywork and aerodynamics based around an all-new ORECA LMDh chassis. The chassis carries an electrified hybrid power unit with an equally new, bespoke twin-turbocharged 2.4-litre V6 engine designed, developed and manufactured by Honda Performance Development (HPD), the racing arm for Acura Motorsports in North America.

Smallest combustion engine
With its 2.4-litre displacement, the AR24e power unit is the smallest displacement internal combustion engine conceived by HPD for endurance racing. It still meets the performance target of 500 kW as measured at the rear axle by torque meters. It features a 90-degree V-angle to reduce its centre of gravity and polar moment of inertia, and can run on sustainable low-carbon fuel.

“We’ve taken the challenge presented by this new rule package from IMSA, and developed what we believe is a very competitive solution,” said Pierre Descamps, who led HPD’s powertrain design team for the ARX-06. “We’ve gone in a new direction for HPD in the design of the ICE. It is still a V6, which of course for Honda is well-known, but we have incorporated several new elements which we believe will make best use of the electric MGU and battery pack. Our new engine will rev to the maximum 10,000 rpm set by the rules, so it also makes a wonderful sound!”

Both IMSA in North America and FIA World Endurance Championship (WEC) rules require manufacturers to use one of four approved prototype chassis, fitted with IMSA-homologated, manufacturer-designed and branded bodywork and engines.

Continued partnership with ORECA
In the case of the ARX-06, HPD and Acura have elected to continue their successful relationship with ORECA. Since moving into chassis design and construction in 2007, ORECA has produced a series of winning sports prototypes, including the Acura ARX-05.

Styling by Acura Design Studio
The exterior styling of the ARX-06 was led by the Acura Design Studio in Los Angeles, in conjunction with ORECA, which is also one of the chassis suppliers approved for prototype competition in both the IMSA WeatherTech SportsCar Championship and the WEC.

Driver and team input was also sought throughout the design process. One effective change was a revision to the placement of the rearview mirrors. This is a seemingly minor adjustment but actually has a large effect on vehicle aerodynamics. Using VR headsets, the drivers were able to sit in the car virtually and recommend a much lower placement for the side mirrors, improving both the aero efficiency of the ARX-06 and visibility for the drivers.

Acura will continue its partnerships with the successful Wayne Taylor Racing and Meyer Shank Racing teams to campaign a pair of ARX-06 entries in the GTP category of the 2023 IMSA WeatherTech SportsCar Championship.