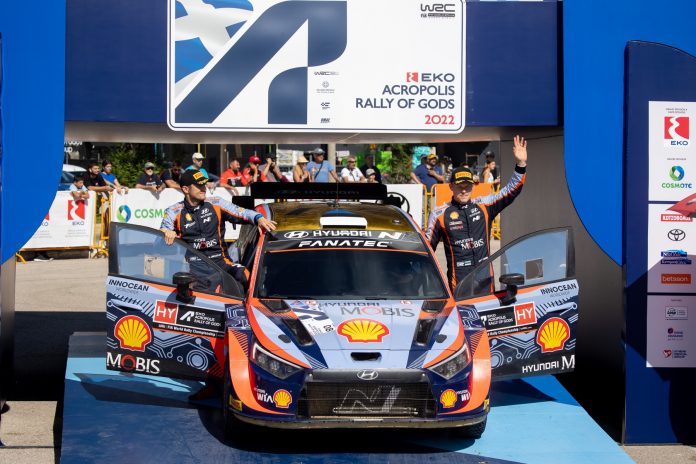 The Hyundai Motorsport team scored another victory in the World Rally Championship (WRC) with Thierry Neuville and Martijn Wydaeghe leading the team to a 1-2-3 finish at the 2022 EKO Acropolis Rally Greece.

The Belgians seized top spot early in the rally after 9-time world champion Sebastien Loeb had to drop out when his pace-setting M-Sport Ford Puma had alternator failure. From that moment onwards, the Hyundai duo never looked back, followed by team-mates Ott Tanak and Dani Sordo.

Neuville carried an advantage of 27.9 seconds over Tanak into the final day’s 3-stage finale. Tanak managed to cut that margin by 2.9 seconds on the first pass through Elefthori, but any hopes of the Estonian putting more pressure on his colleague ended when team orders were deployed. The competitive spirit was one thing, but ensuring the team finished intact was more important.

With fourth-placed Elfyn Evans – driving a Toyota GR Yaris Rally1 – having turbo problems on the road section before the first stage of the day, the frontrunning trio could pull a lead of more than 3 minutes clear of the field.

Under instructions to bring the cars to the finish, all three Hyundai drivers went into safety mode. Their positions in the rally remained unchanged and Neuville took the victory by 15 seconds.

“It has been a tough season so far and to get the victory after a very difficult weekend in Belgium is a relief,” Neuville said. “The most important thing is that we have a 1-2-3 for the team. After all these years, we finally got it and it’s a historical moment for the brand and the team. Everybody has worked hard for this and it’s a nice reward.”

Tanak’s score moved him to within 53 points of championship leader Kalle Rovanpera, who finished more than 17 minutes off top spot, with 3 events remaining. The 21-year-old Finn hit a tree on Saturday and haemorrhaged as he nursed his Yaris to service. He did, however, salvage 4 points from the Wolf Power Stage and could seal the crown at the next round should he outscore Tanak by 8  points.

“There has been a combination of many factors contributing to those results and we have to learn from this weekend about why things went wrong, and we must improve for the future. Elfyn’s retirement was a particularly disappointing way to start the final day and we are already investigating what happened,” said Jari-Matti Latvala, Team Principal of the Toyota GAZOO Racing World Rally Team.

“The good thing is that we got Kalle and Esapekka both to the finish with some really helpful points towards the Manufacturers’ championship plus 5 more from the Power Stage. Kalle especially did a really good drive there to take 4 points for his own championship. We still have a good lead and now we need to look positively towards Rally New Zealand,” he added.

Pierre-Louis Loubet fought back to equal his career-best result by finishing fourth overall with his M-Sport Ford Puma Rally1. Loubet briefly led and took 2 stage wins on Friday but tumbled down the standings with a damaged front-left tyre the following day.

The WRC2 and WRC2 Junior winner Emil Lindholm finished in an impressive seventh place overall with his Toksport Skoda Fabia, one position ahead of team-mate Nikolay Gryazin. Cypriot Alexandros Tsouloftas was set to finish just outside the overall top 10 and fifth in WRC2 in a Volkswagen Polo GTI R5 but came through to ninth overall and third in WRC2 after Yohan Rossel rolled his PH Sport Citroen C3 Rally2 into retirement on the final stage.