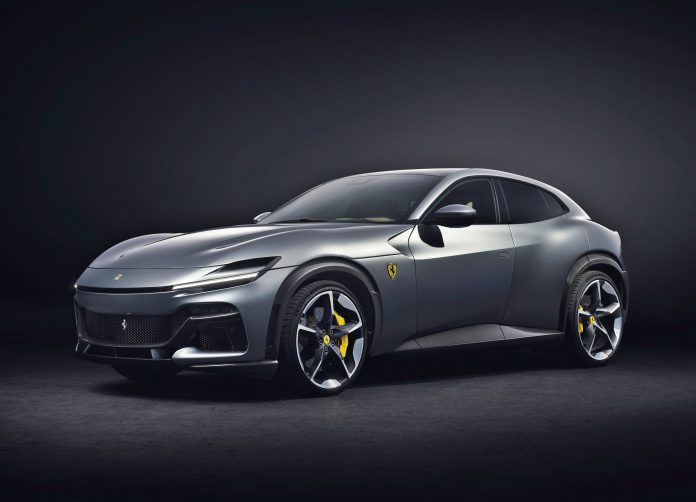 Although it seems like every carmaker has a SUV today, that’s not really been the case. Ferrari did not jump on the SUV bandwagon like Lamborghini but even they have to offer customers such a car. And as with some other carmakers, they have tried to disassociate their new Purosangue as ‘another new SUV’ but rather, another new Ferrari.

Porsche tried that same line too when they launched the Cayenne as their first SUV, referring to it more as ‘another new Porsche’. And Rolls-Royce, perhaps feeling ‘Sport’ and ‘Utility’ are not appropriate for the brand to be associated with, chose to initially refer to their Cullinan as ‘a high-bodied car’.

But ‘SUV’ has become so embedded today, after having been in use since the `1990s’, that carmakers trying to call their SUVs something else have eventually had to call them that. Some try to use crossover which refers to a blending of SUV and passenger car, with a bit more of the latter.

Anyway, here it is – the first ever SUV in Ferrari’s 75-year history. Just as Volvo took a long time to come out with its first SUV because it had to be satisfied that the important issues of safety were fully addressed, Ferrari has also taken time to ensure that the driving dynamics and performance of allow the Purosangue to have the Prancing Horse on its bonnet.

To enable the company to achieve the ambitious goals set for this project and create a car worthy of a place in its range, a completely different layout had to be developed. The average modern GT’s engine is mounted forward in the car, almost straddling the front axle with the gearbox coupled directly to it. With the Purosangue, the mid-front-mounted engine has the gearbox at the rear as a  transaxle layout.

The Power Transfer Unit (PTU) is coupled in front of the engine to provide a unique all-wheel drive  transmission. This delivers the 49:51 weight distribution that the engineers consider to be optimal for a mid-front-engined sportscar.

Adapted from the 812 Superfast engine, the Purosangue’s engine (F140IA) is the most powerful engine ever developed by Ferrari for a 4-seater car, and also the most powerful in its segment. It maintains the architecture similar to the most recent Ferrari 12-cylinder units, ie a 65° angle between cylinder banks, a 6.5-litre capacity, dry sump and high-pressure direct injection.

It is tuned, however, to produce the highest amount of torque at low revs without losing the feeling of linear, never-ending power typical of Ferrari’s naturally-aspirated V12s. 80% of the maximum torque is generated at 2,100 rpm, peaking at 716 Nm at 6,250 rpm. The maximum power output of 725 ps is reached at 7,750 rpm.

The engine programming includes a new patented function derived from Ferrari’s Formula expertise that optimises the torque during transient acceleration manoeuvres in the low and mid-range. It has a single and a multi-spark function to make the combustion as efficient as possible at all revs. The ECU also controls combustion in the chamber to ensure that the engine is always working at peak thermodynamic efficiency, thanks to a sophisticated system that recognises the octane rating (RON) of the fuel in the tank and adjusts the ignition timing accordingly.

The F140IA’s soundtrack is an integration between the symphony created by the engine’s combustion sequence and Ferrari’s ability to control the acoustics in the cabin. The equal-length exhaust manifolds are tuned to guarantee the 12 cylinders are in perfect harmony. The new plenum with optimised intake duct accompanies the V12’s high notes with the body of the medium frequencies. The two progressive silencers, the response of which is now included in the Manettino settings, cater for in-town and performance driving.

The resulting soundtrack is typical Ferrari, with those unmistakable V12 harmonics present, yet subtle, until the driver accelerates hard. As the engine speed approaches the 8,250 rpm redline, there’s a crescendo that reaches its pinnacle at the kind of high revs only Ferrari’s engines can deliver.

The layout of the 8-speed, oil-bath dual-clutch transmission was optimised through the adoption of a dry sump and a significantly more compact clutch assembly. The reduced height lowers the centre of gravity to contribute to enhanced handling.

Total gear shift times have been reduced compared to the previous 7-speed DCT, with new gear ratios having shorter spacing, and a longer top ratio is geared for greater economy in highway driving.

With earlier SUVs, aerodynamics were not too important given their lower speeds than passenger cars. However, this aspect soon became important as SUVs became faster and sportscar manufacturers started to offer high-performance SUVs capable of very high speeds.

Thus the Purosangue’s bodywork was subject to the same sort of aero development as all other Ferrari sportscars. With the taller stance, new solutions had to be found for stability and these included an air curtain that aerodynamically seals the front wheels, preventing turbulent transverse air flows being generated.

The primary focus of the Purosangue’s aero design was the car’s centreline section, essential to both the airflow design and to reduce the drag coefficient, as well as minimising the frontal surface area. The car’s front silhouette was designed to create the most seamless continuity of profile possible between the area of maximum curvature of the bonnet and the windscreen header rail. The rear area of the roof, the rear screen and the spoiler, on the other hand, demanded most work because it is fundamental to managing flow separations and pressure fields.

The best possible compromise between the need for the smoothest design possible for the roof-rear screen line and the need to reduce the height of the tail itself was achieved by using two elements that complete the aero package for the rear of the car: the suspended spoiler and the nolder on the lip of the boot.

While the suspended spoiler helps neutralise the curvature of the roof downstream of the area over the heads of the rear-seat passengers, the nolder, which is barely 7 mm high, channels the wake vortices to create a slight recompression at the tail of the car.

The suspended wing on the bonnet, just ahead of the A-pillar, dubbed the ‘aerobridge’ in reference to a similar element introduced on the F12 berlinetta, plays a very different role to its namesake. While the latter’s aerobridge deflects the airflow from the bonnet downwards to boost downforce, the one on the Purosangue is designed to reduce drag.

There’s no rear windscreen wiper installed on the Purosangue, so the glass has to be cleaned only by air flowing over it. By shaping the lower surface of the suspended spoiler in a curved, the right airflow speed is maintained as it moves towards the rear screen. There are two pairs of vortex generators at each end of the lower surface of the spoiler, which optimise the uniformity of the scrubbing.

Also interesting is the unconventional location of the headlights, which made it possible to create two air intakes above and below the DRL. The upper one is used to channel air into the complex blown system which vents underneath the front aerobridge. The lower one, on the other hand, is used to channel air to the brake cooling system. The design of the vertical outside surfaces of both air intakes includes an air-catcher which maximises the quantity of air channelled through them.

For the Purosangue, the very latest vehicle dynamic control systems are used, including independent 4-wheel steering and ABS ‘evo’ with the 6-way Chassis Dynamic Sensor. Also making its world debut is the new Ferrari active suspension system which was first previewed some 10 years ago on a prototype at the Geneva Motorshow. This very effectively controls body roll in corners as well as the tyre contact patch over high-frequency bumps to deliver the same performance and handling response as other Ferraris.

The all-new chassis has a lower structure made entirely from high-strength aluminium alloy. Together with the structural elements of the upper body, it makes up a spaceframe chassis that is lighter than Ferrari’s previous 4-seaters despite being larger.

The carbonfibre roof is standard to keep weight down and lower the centre of gravity. It has rigidity levels similar with a glass roof while weighing 20% less than an aluminium roof with soundproofing.

Redesigning the bodyshell (made from materials ranging from aluminium to carbonfibre) from scratch also meant the designers could incorporate rear-hinged back doors (referred to as ‘welcome doors’) to make movement in and out easier while keeping the car as compact as possible.

The cabin has four generous-sized seats and being a SUV, the driver has a more commanding view all round than any other Ferrari. The packaging has been designed to still provide a driving position that is as close to the floor as possible to give the driver a strong connection to the car’s dynamic movements.

The driver’s cockpit is inspired by the SF90 Stradale and is almost exactly mirrored on the passenger side. Like all other Ferrari models today, there is an entirely digital interface with a 10.2-inch display which provides all the information required.

The Purosangue’s interior architecture is based on the dual cockpit dashboard concept which has been extended and replicated in the back of the car, creating four areas quite distinct in terms of their functionality, volumes, materials and colours.

For the first time in Ferrari history, the cabin has 4 separate and independently adjustable seats. The integration of comfort-focused components, the use of variable density foams, and the new suspension system mean that the Purosangue can provide unprecedented occupant comfort and a layout with sportiness and luxury.

The boot volume is the largest ever provided on a Ferrari. Additional space can be created by the usual method of folding down the rear backrests. The aluminium rear hatch is electrically activated and opens to 73o.

Sustainable materials have been used extensively throughout the Purosangue, opening up the possibility for new combinations. In fact, 85% of the launch trim for the car was sustainably produced using recycled materials. In fact, the Purosangue is the very first car in the world to use a  special version of Alcantara made of 68% of post-consumer recycled polyester.

Needless to say, every purchaser of the Purosangue can customise the SUV to whatever their imagination can come up with. Additionally, for the first time with a Ferrari, customers can personalise the roof of their car. If they don’t want the carbonfibre version, there is  a full-length electrochromic glass roof which can darken at the touch of a button.

And as a sign of the times, as an absolute first for the Ferrari range, the Purosangue comes an air quality sensor that can check the air outside the car and improve quality in the cabin by smart air recirculation control. The filters can prevent particles of up to PM2.5 from entering the car so there should be a pretty clean and healthy environment for the occupants.

First deliveries will start in 2023 with righthand drive versions rolling out during the second quarter of the year. Official pricing in various markets has not been announced but in Italy, the Purosangue will have a base price of €399,000, equivalent to around RM1.8 million today.