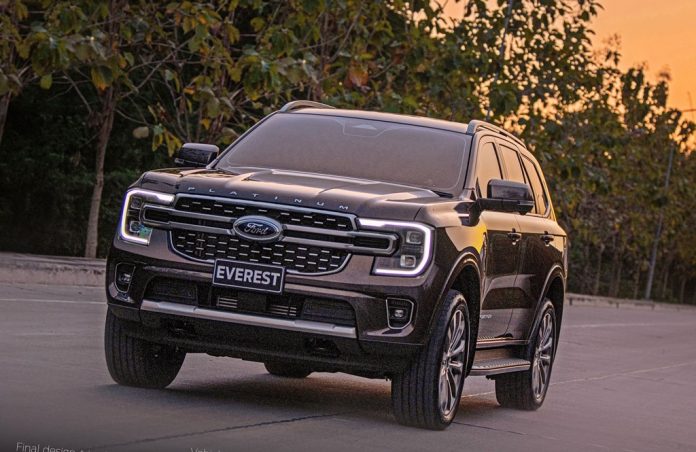 The all-new Everest joins the Ford range in Malaysia, adding a SUV to the next-generation Ranger pick-up in Sime Darby Auto ConneXion’s offerings. This is the third generation of the SUV that was developed for ASEAN and other Asia-Pacific markets around the world and it’s no secret that the Everest (also known as the Endeavour in India) shares a lot with the latest Ranger.

Though the Everest is on the same platform as the Ranger, the shared approach was not considered when the Ranger was being developed in the 1990s as Ford’s ‘Asian Car’. However, with the growing popularity of SUVs, Ford knew it had to have a representative in that segment too. It had the Explorer, once the bestselling SUV in the world, but that was essentially a North American product not really suited for the rest of the world.

So to moderate development costs (and save time), it seemed a good approach to share the platform of the Ranger, which had been extremely well received. According to Chuck Bambanek, who led the development team, the Everest program cost some US$100 million, about half what it would have cost if a brand new platform had also to be developed for the SUV.

“When we launched the Ranger, we said that there would be some derivatives in future but at that time, a model like the Everest was not specifically considered. We certainly wanted to find more ways to use the Ranger platform since this would be a key to competitiveness through getting greater economies of scale,” said a former Ford executive who was involved in the early Ranger and Everest programs.

While the first generations of the Everest, which was launched in 2003, was seen as just a SUV version of the Ranger, the second generation broke away from the similar styling cues. And now, the latest third generation launched today has evolved into a product with more of its own identity and positioning. There are styling elements – like the ‘C-clamp’ headlamps and strong horizontal upper grille bar at the front – shared with the Ranger, but the Everest also has its own style which is partly evolved from the second generation.

The powertrain choices are similar to those of the Ranger, with two turbodiesel 4-cylinder engines available. Both have 2-litre displacements with one having a single turbocharger and the other a bi-turbo. The single turbocharger engine, which generates 170 ps/405 Nm powers the Everest Sport, while the bi-turbo (210 ps/500 Nm) is for the Everest Trend and Titanium variants. Both engines are tuned to run on diesel blends up to B20 with no problem.

The Everest Sport has a 6-speed automatic transmission with rear-wheel drive while the Everest Trend and Titanium have 4×4 and a 10-speed automatic transmission. Besides a transfer case that provides High and Low ranges for difficult conditions, there are also selectable drive modes which optimize performance on different surface conditions. Additionally, to enhance stability on very slippery ground, the Everest Trend and Titanium come with a quick-reacting e-Locking rear differential.

Unlike many other SUVs in this price class nowadays, the Everest does not have a monocoque structure like a passenger car’s. Sharing the platform with the Ranger means it has the more traditional body-on chassis frame (BOC) structure. Though this has its pros and cons, with the merits of BOC being in load-carrying capability.

Modern engineering has also been able to take away some of the drawbacks of BOC which affect ride and handling. However, to provide better comfort, the Everest also has coil springs at the rear, instead of leafsprings which are installed for the Ranger. The damper settings have also been adjusted to give the driver more enjoyable driving.

Like the latest Ranger’s platform, the one for the new Everest is also evolved with 50 mm increases in the tracks. For the Ranger, this has improved the cargo box spaciousness while for the Everest, it should enhance cabin comfort. The rear suspension dampers are also on the outside of the frame rails, the revised location said to allow more tuning range with a better balance between comfort and durability.

Many people like SUVs for the commanding position from the driver’s seat but besides providing a higher seating position, a SUV also has more ground clearance. In the case of the Everest, it’s 200 mm which is good over rough ground. But even better is the 800 mm wading ability which allows the vehicle to cross rivers (but always do check the depth first), which also means that the driver should be able to confidently drive through urban flash floods.

The ‘inside story’ is one of the big things about the new Everest, which Ford designers worked hard to create as a ‘sanctuary’. Customers told the market researchers that they wanted comfort and quietness, and to provide this, the designers looked at modern homes and have used plush materials, premium finishes and provided ambient lighting in areas where customers can appreciate them the best.

There is also more elbow, leg and shoulder room in the front and back and access to the third-row seats is much easier, thanks to second-row seats that slide further forward than before. The second and third row seats have been designed to fold flat to allow for long loads to be carried safely.

The sense of spaciousness is amplified by the full-width ‘coast-to-coast’ dashboard with a tablet-like central display panel. With the Everest Titanium, the occupants can also let the sky in with a panoramic sunroof.

‘Utility’ is in the SUV term and the designers have provided features and conveniences to ensure that all occupants enjoy maximum utility/ There are no less than 10 cupholders around the cabin and three 12V power sockets, with the Everest Titanium having a 230V AC power outlet capable of delivering 400W (up from 150W) to power laps and other large appliances. There are also 4 USB charging ports (one of which is windscreen-mounted) and a wireless Qi charger.

The variable-volume cargo area has underfloor storage for small items. To stop items from falling out of the back when the tailgate is open, a small lip, affectionately known as the ’apple catcher’ valley, runs along the edge of the opening. There’s the convenience of a powered tailgate with handsfree operation for the Everest Trend and Titanium.

In addition to a more refined and comfortable interior, Ford focused on bringing the latest connectivity and technology features into the new Everest. A first-in-class large, high-resolution portrait 12-inch touchscreen in the Everest Titanium (10.1-inch for the Trend and Sport) is the command centre for managing connectivity and infotainment.

Ford’s latest SYNC4A infotainment system brings new levels of connectivity and enhanced voice recognition to make operation more convenient and safer. Wireless Apple CarPlay and Android Auto can mirror favourite apps (like Spotify or Waze) on the display so that they can be accessed directly from the big screen.

For those who are worried that the size of the Everest (4914 mm long, 1923 mm wide) makes it difficult to park, that will be forgotten when actually parking. With the 360-degree camera with split-view display in the Everest Titanium (reverse cameras in the Sport and Trend) in addition to front and rear sensors, parking in even tight spots is ‘no sweat’.

Ford has always treated occupants of its SUVs and pick-up trucks the same way where safety is concerned, giving just as much safety technology as its passenger cars. For the Everest, there are new and enhanced driver assist technologies and safety features to take the stress out of driving and help drivers to remain focused.

For occupant protection, all variants come with 7 airbags (driver and front passenger, dual seat side, dual side curtains) within a strong safety ‘cage’. Active safety features and systems include ISOFIX points for compatible childseats, ABS, EBD, electronic stability control with traction control, emergency brake assist, hill descent control, hill launch assist, roll-over mitigation and adaptive load control. Incidentally, the parking brake is now electronic, which is easier to use while the small tab takes up little space on the console between the front seats.

Ford has also added another category of active safety systems which assist the driver to avoid accidents or reduce their effects, and even reduce fatigue on long journeys. Besides turn assist and cruise control across the range, the Everest Titanium also gets advanced driver assistance systems such as blind spot information system (BLIS), lane departure warning and assist, high beam assist and a tyre pressure monitoring system.

Other new or enhanced technologies are adaptive cruise control with stop and go and lane centering and Active Park Assist 2.0 which almost autonomously positions the Everest in a parallel or perpendicular parking bay with the press of a button. With Evasive Steer Assist, the driver will be helped to avoid potential forward collisions as the system reduces steering when a collision cannot be avoided by braking alone.

With the size of the Everest, reversing has to be done cautiously, even with the rearview cameras. To help the driver, there are systems to detect other road-users who may be crossing the path of the vehicle as it is reversing out. The driver will be alerted but if no action is taken, then the brake system will automatically activate to stop the motion.

The same autonomous braking capability is also provide going forward. The system will alert the driver if a collision is imminent and if the driver does not respond correctly, the brakes will be applied automatically. The autonomous emergency braking system has also been enhanced to work at intersections.

Imported in CBU form from Thailand, the new Everest comes with a 3-year manufacturer’s warranty (or maximum of 100,000 kms) plus another 2 years of extended warranty (with a maximum of an 60,000 kms).

To know more about the new Everest and Ranger in Malaysia, visit www.sdacford.com.my or any authorized Ford showroom.