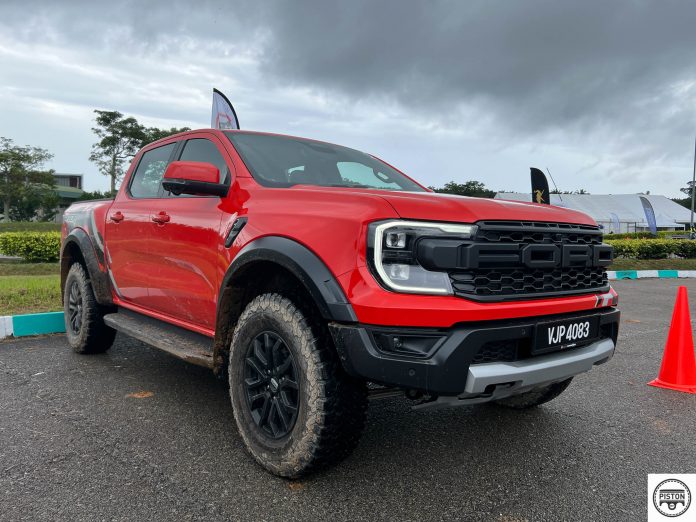 The all-new Ranger Raptor is one of the most highly anticipated new trucks to be launched in recent times. Hailed as the ultimate performance variant of the all-new Ford Ranger, the new Raptor is said to be built to dominate the wilderness, master the mountains and rule everywhere in between.

What’s new with the engine?

At the heart of the new Raptor lays a new twin-turbo 3.0-litre Ecoboost V6 petrol powered engine. Mated to Ford’s 10-speed automatic gearbox, the new powertrain produces a monumental 397PS at 5,650rpm and 583Nm of torque at just 3,500rpm.

The engine is not only a powerhouse in every sense of the word, but is also a technological wonder. It is built using a compacted graphite-iron cylinder block and is said to be 75% stronger and up to 75% stiffer than the iron used in traditional engine castings.

The engine also features some motorsport derived technologies such as a new “race-bred” anti-lag system which keeps the twin-turbos spooling for up to three seconds after the drivers lets go of the throttle. This is to ensure there is absolutely no turbo lag and power is delivered instantaneously when the driver demands for it.

The suspension and shock absorbers are the most advanced ever!

As for the chassis and suspension, Ford’s engineers didn’t hold back. The shock absorbers and suspension have been completely redesigned for strength and weight enhancement. The upper and lower control arms have been strengthened and lightened. The suspension offers long travel at the front and back and a Watt’s link rear end offer better control to the driver across extreme terrains and at high speed.

Also managing suspension duties are two-pairs of FOX shocks. The new shocks are said to be the most sophisticated ever on a Ranger Raptor, and feature a 2.5-inch Live Valve Internal Bypass technology to enhance ride comfort and handling. Not only that but the shocks are also filled with Teflon-infused oil that reduces friction by as astounding 50% compared to the FOX shocks on the previous Raptor. The shocks also feature predictive technology that utilises cutting-edge position-sensitive damping capability that can predict suspension movement based on driving style, and the terrain.

And if you are wondering, Ford didn’t forget about bottoming-out in case of high-speed jumps. To protect against that, the shocks come with FOX Bottom-Out Control that provides maximum damping force in the last 25% of shock travel. Similarly, the shocks can also automatically stiffen the rear dampers to prevent the Raptor from squatting under hard acceleration.

The chassis too is said to be upgraded with a series of new mounts and reinforcements for body elements such as the C-pillar, the cargo bed and also offer unique frames for the jounce bumper, shock tower and rear shock bracket. All of this has been designed to help the all-new Raptor cope with punishing off-road conditions, and to keep up with the masses of power.

The all-new Raptor comes with a 4×4 electronic shift-on-the-fly (ESOF) system that has been upgraded. This is not new technology, but the system in the Raptor offers an all-new electronically controlled on-demand two-speed transfer case with four settings – 2WD, 4WD Auto, 4WD High and 4WD Low. The system also further adds a front locking differential to complement the rear locking differential for ultimate control on demanding terrains.

Complementing that is a new updated Terrain Management System that offers seven selectable drive modes. In addition to the ‘Baja’ (pronounced as Baha), that is configured for high-speed off-roading. The other modes available are Normal, Sport, Slippery for on-road driving and Rock Crawl, Sand and Mud/Ruts.

Each mode adjusts multiple elements in the Raptor from engine and gear shifts, ABS sensitivity and calibration, traction and stability controls, exhaust valve actuation, steering and throttle response, and even changes the design of the instrument cluster depending on the mode selected.

The new Raptor stays true to the motorsport theme with an all-new class-exclusive active exhaust system that amplifies engine performance but also changes the engine sound according to the selected mode. Available in four modes – Quiet, Normal, Sport and Baha – Ford says that the all-new Raptor can either purr or roar at the press of a button.

What about the design and interior features?

A Raptor can never be a Raptor without some wild aesthetics, and the all-new Raptor stays true to that with massive flared arches that enhance the width of the car. And in case the competition does not know what smoked them, bold F-O-R-D lettering and a bumper that is separated from the grille will remind them.

The 17-inch alloy wheels come wrapped in BFGoodrich all-terrain KO2 tyres really accentuate the muscular appearance of the Raptor while functional vents, aero features, a rear bumper that angles upwards showing its its 265mm ground clearance, LED lights all around and Ford Performance scuff plates and new cast aluminium side steps enhance the toughness of the Raptor.

The design carries on with the with C-Clamp Matrix LED headlights with dynamic bending lights first seen in the Ranger Wildtrak.

The interior design stays true to the off-road performance and high-energy nature of the exterior. The cabin features new jet fighter sports leather seats that are not only supportive during high speed cornering, but are also electronically adjustable in 10 different ways. The front passenger too gets powered seats.

As for entertainment besides the masses of power already available for driving entertainment, the all-new Raptor also comes with a fully-digital cabin with a new high-resolution 12.4-inch TFT cluster display and a 12-inch centre touchscreen loaded with Ford’s SYNC 4 entertainment system featuring wireless Apple CarPlay and Android Auto connectivity and a Bang & Olufsen sound system with eight-speakers. There are also four USB charging ports, a wireless Qi charger and a 360-degree camera.

As for the price, SDAC shocked the local market by announcing the new Ford Ranger Raptor will cost just RM259,888, which is an absolute bargain considering the features you are getting.