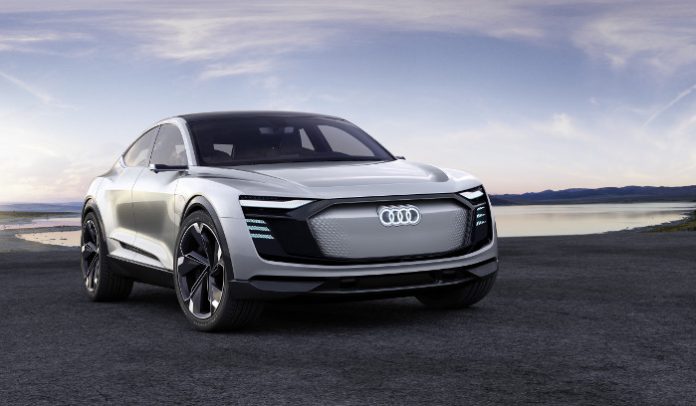 At the ongoing Shanghai Motorshow, Audi has unveiled its design study, the all-electric E-Tron Sportback Concept. Sporting futuristic design elements, this vehicle provides a glimpse into what the actual car might look like when it hits the road next year.

This vehicle measures 4,900mm long, 1,980mm wide and 1,530mm high. It has a wheelbase of 2,930mm and according to Audi is positioned in the C segment which is close to the Audi A7. The front end features an octogonal single frame grille with a wide horizontal cut but unlike conventional models, it forgoes the large opening at the front due to the fact that electric motors require far less cooling than petrol engines.

The edges of the central surface are drawn back which help channel airflow. The sharp creases, angular headlights and blacked-out grille provide for a futuristic yet menacing stance.

The contours are angular yet simple and provide the vehicle with a coupe-like look. The wing mirrors have been replaced with cameras that provide a better field of view and almost eliminating blind spots that come with conventional mirrors. The LED lighting features digital matrix projectors that help illuminate the road ahead during the day or night. Below the DRLs are 250 LEDs that display engaging graphics and communicate signs while on the move.

Inside, the E-Tron features a signature white Audi interior with a digital instrument cluster and switchgear that wouldn’t look our of place on a commercial airliner. Unlike conventional Audis, this one has two rear seats instead of the stretched three seat set up. The dash up front features a sports steering wheel that resembles that of the R8 but overall, has a very minimalistic look as opposed to its competitors that feel very busy and complicated.

The E-Tron also has 23-inch wheels that feature a 6-spoke design and add to the sporty look but also give the car a wider track. But Audi may choose drop the rim size for the production version in the name of power conservation later on. 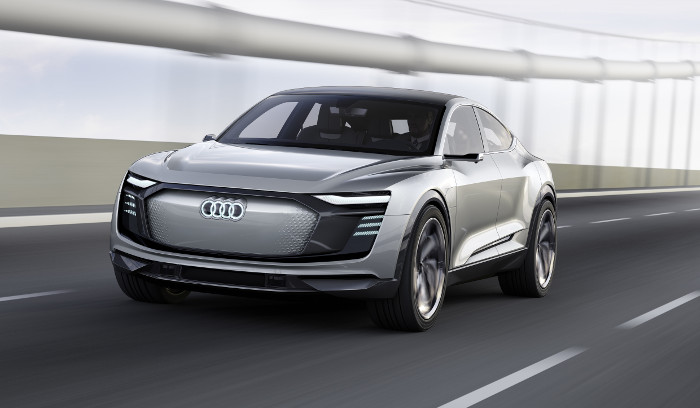 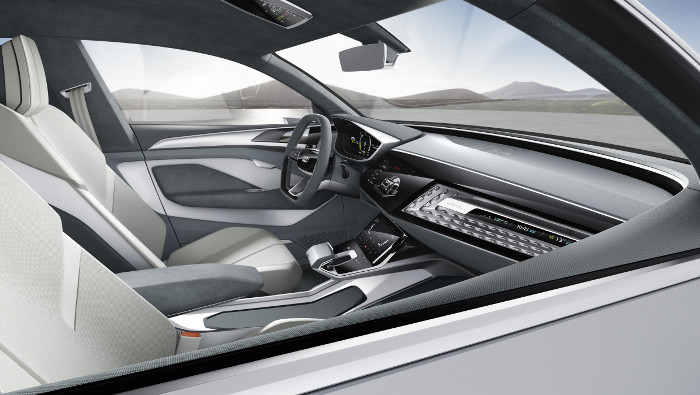 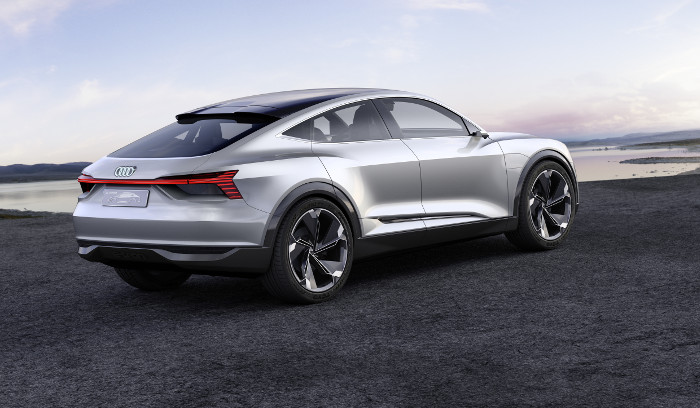 Since this is an all-electric vehicle, it features three motors, one on the front axle and two on the rear one. Working in tandem they provide it with an-all-wheel-drive system. Power is rated at 320kW (429bhp) which increases to 370kW (496bhp) when in boost mode. The 0-100km/h sprint is accomplished in 4.5 seconds, which isn’t supercar quick but impressive considering this Audi’s dimensions. Juice is supplied via a 95kWh lithium-ion battery pack that also provides the vehicle with a range of 450km.

The liquid cooled Lithium-ion battery pack is positioned between the front and rear axles and placed below the passenger compartment. Due to this, the vehicle has a lower centre of gravity and a balanced axle load distribution of 52:48 (front/rear). The battery can be charged by the Combined Charging System which accepts Alternating or Direct Current (AC or DC) charging outlets.

Regarding the reveal, Rupert Stadler, Chairman of the Board of Management of AUDI AG, said, “Our Audi e‑tron will be starting out in 2018 – the first electric car in its competitive field that is fit for everyday use. With a range of over 450km and the special electric driving experience, we will make this sporty SUV the must-have product of the next decade. Following close on its heels, in 2019, comes the production version of the Audi e‑tron Sportback – an emotional coupe version that is thrillingly identifiable as an electric car at the very first glance.”

Though it has been labeled as a design study, the production ready car is slated for launch in 2018, which means several elements will be carried over from the concept vehicle.