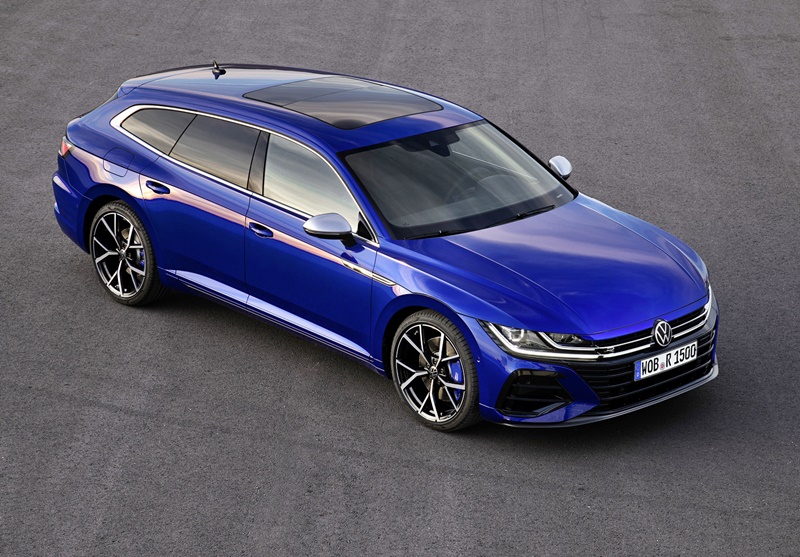 The Volkswagen Arteon, successor to the CC model, has received an extensive update for its new model year as well as gained a second bodystyle variant in the form of the Arteon Shooting Brake. For readers not familiar with a ‘shooting brake’, it’s actually an old term from the days of horse carriages which were used to carry equipment during hunting sessions. It evolved into the stationwagon but a ‘shooting brake’ is usually more sporty looking.

Volkswagen’s new entry in the shooting brake segment indicates that this segment still has potential in spite of the continued growth in demand for SUVs. There are people who want the extra load-carrying capability but not the tallness and bulkiness of a SUV (although many of today’s crossover SUVs are almost like cars anyway).

The Arteon is Volkswagen’s Gran Turismo — marrying the sleek design of a premium coupe to the space of a midsize sedan. With the Shooting Brake, the difference starts from the B-pillar rearwards. Instead of the coupe-shaped rear end, the roof and window lines are extended towards the rear on the Shooting Brake and end in the new roof spoiler.

At the top, the window line runs parallel to the roof. However, at the bottom, the lines move upwards towards the D-pillars, thus making the window area at the rear narrower and more striking. All elements together form the sporty rear profile typical for a Shooting Brake.

Sharper looks
The latest Arteon has a more a refined front end with sharpened design elements. The long, wide bonnet stretches across the entire front profile to the wheelarches to form the shoulder section. At the front, it reaches far down into the grille, emphasizing the ample width of the car with its crossbars. Aerodynamically, it’s pretty efficient with a Cd of 0.265. 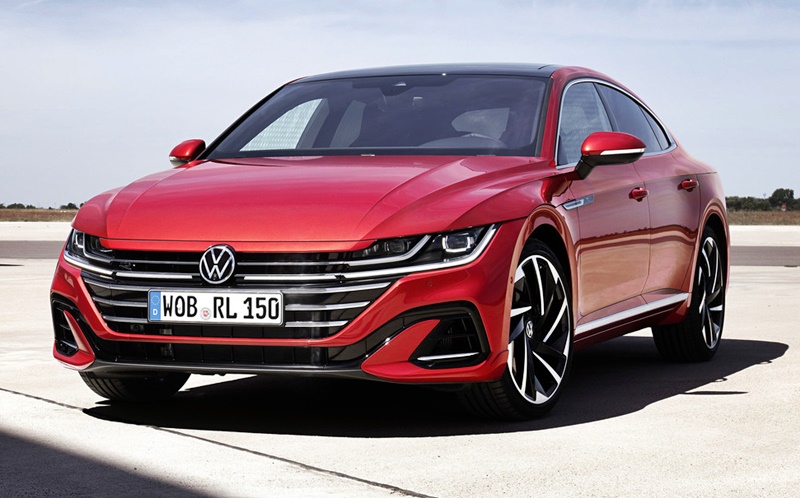 The Arteon can also be configured with an illuminated grille, which was not available before. On certain versions, new LED daytime running lights (DRLs) connect to form a central light bar in the grille, surrounding the new Volkswagen logo and using light as the new chrome. Consequently, the Arteon has been given a new and unmistakable daytime and night-time lighting signature.

The lower section of the front profile, the front apron, has also been modified. Up to now, this area featured four chrome bars. These have now been transformed into three significantly more striking chrome bars.

Powertrain choices include hybrid
Depending on the market, the Arteon will have at least four powertrain choices – a powerful 2-litre turbocharged TSI petrol engine, 1.5-litre TSI petrol engine, 2-litre turbodiesel or a plug-in hybrid. 4Motion all-wheel drive is also available for some variants. The flagship Arteon has R-Performance Torque Vectoring which distributes torque variably both between the axles and also between the rear wheels depending on the driving situation.

Interior redesigned for refinement
The updated Arteon gets a redesigned cockpit with further refinement. At the topmost level of the dashboard, new leatherette surfaces stand out by having been refined are more pronounced with decorative seams to visually build a bridge to Volkswagen’s luxury SUV, the Touareg. On the second level, new aluminium decor is installed, with midrange versions having translucent aluminium decor and 30-colour ambient lighting. The air outlets, stretching up to the third dash panel level, are fully integrated here. 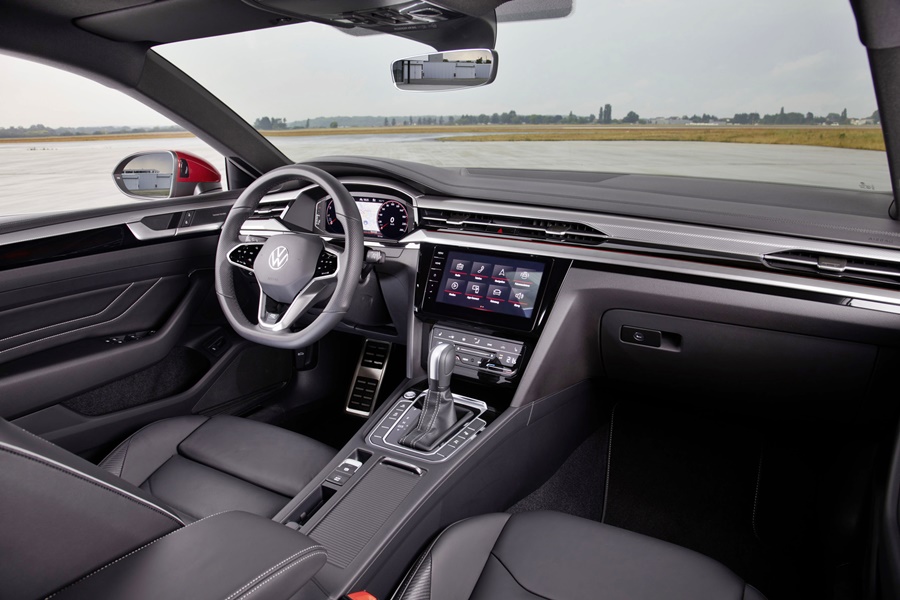 Like the new Golf, the Arteon has the Volkswagen Digital Cockpit. This allows the driver to configure the instrument display on the 10.25-inch display. The driver can quickly and easily switch between three basic layouts using a View button on the multifunction steering wheel.

Volkswagen is also offering a newly developed, high-end sound system made by audio specialists harman/kardon for the very first time. It has been specifically geared towards the Arteon product line. The system uses a 700W, 16-channel Ethernet amplifier to power a total of 12 high-performance loudspeakers. 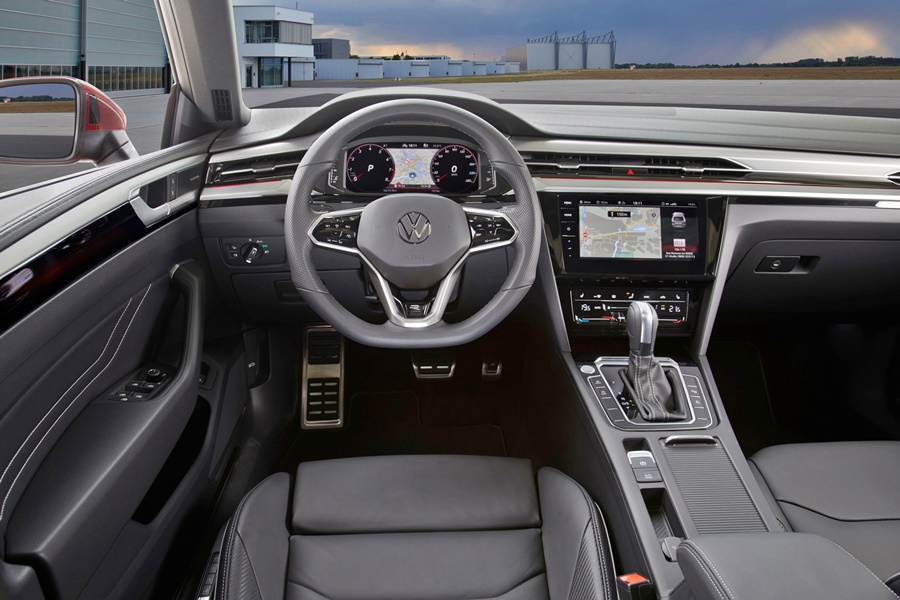 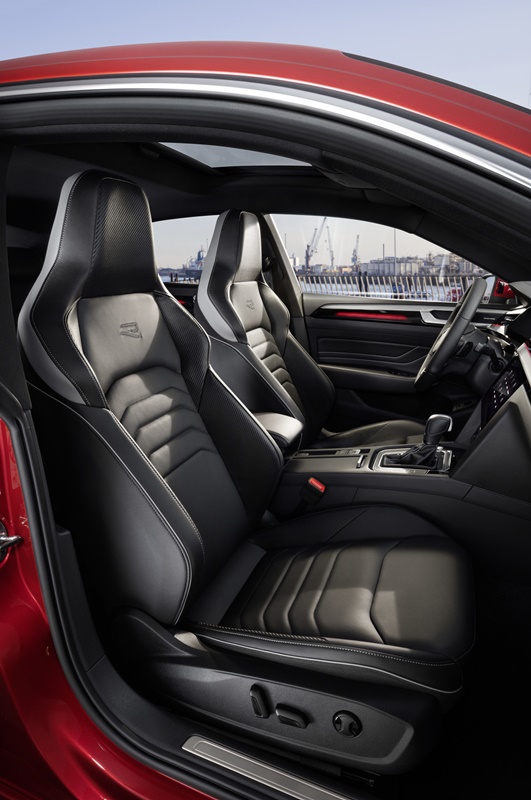 The range of technical innovations involves powertrains as well as further IQ.DRIVE assist systems. The Travel Assist system, an option, enables partly automated driving within a speed range from 0 km/h to 210 km/h (within the system limits). An integral part of Travel Assist is the ACC with predictive speed control. The adaptive cruise control reacts to speed limits, towns, bends, roundabouts and junctions with corresponding speed adaptation.

In combination with the Travel Assist system, the steering wheel rim additionally features touch-sensitive surfaces which, once the system has been activated, detect whether the driver has at least one hand on the steering wheel for safety reasons.

Launch in Malaysia still pending
The Arteon was expected to be in Malaysian showrooms last year as bookings were being accepted in July. A unit was shown at various dealerships between July and October, with the price then quoted as RM290,000 upwards. However, it’s now been a year and we have yet to see the model.

Visit www.volkswagen.com.my to know more about models available in Malaysia. 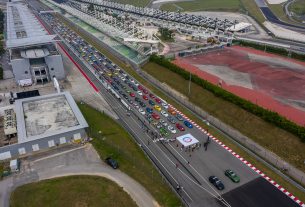 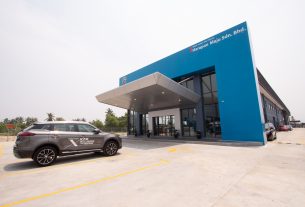 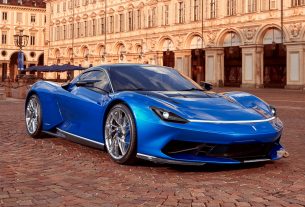 Is this the ultimate electric hypercar?