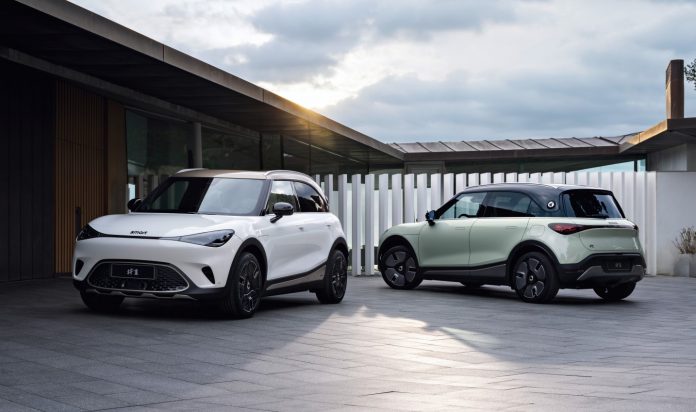 Proton will begin selling its first electric vehicle (EV) from Q4 of 2023 via its marketing arm, Proton Edar, which has been appointed as the importer, distributor, and dealer for smart New Energy Vehicles (NEV). Besides the Malaysian market, Proton Edar will also be handling the brand in Thailand (from 2024).

The EV is the new smart #1 (referred to as ‘hashtag 1’) which was launched in April this year. The smart #1 is the first product of a joint venture company, smart Automobile Company Ltd. which was established by Mercedes-Benz AG and the Zhejiang Geely Holding Group in 2019. It is a ‘descendant’ of the original smart company which started in the 1990s as a low-cost concept of Nicolas Hayek, creator of the Smart watches.

The EV will not be in Proton showrooms and there will be separate outlets dedicated to the brand. Expect a different, more digital environment at these outlets as they will be modelled along the same concept as smart outlets in other markets. Whether aftersales support will be shared with Proton or be separate is something being studied at the moment although it may be better to have dedicated facilities. Just because EVs are electric vehicles doesn’t mean that the ‘wireman’ at the workshop will be qualified to handle them!

As the brand image is youthful and ‘lifestyle’, the smart #1 is targeted at younger customers. However, the smart #1 is a premium product and its price would therefore be unlikely to be under RM150,000 with the present tax exemptions. This would make it difficult for young customers in Malaysia to afford but according to Roslan Abdullah, CEO of Proton Edar and Deputy CEO of Proton Holdings Berhad, there is a segment of young and affluent customers whom the company expects will be interested in such a product.

The marketing of smart EVs is seen as the first phase of collaboration between Proton and smart and could possibly see other ventures. The company will also be looking at EV models for other segments, although these could come from other brands in the Geely group (eg Emgrand and Zeekr). This is one of the advantages Proton has by being part of such a large group as it has access to models and technology which can be adapted for its products.

Certainly, it will provide Proton with useful experience and insights into selling and servicing EVs to Malaysians in preparation for its own electrified products in future. In fact, the carmaker has already established a New Energy Vehicle division to look into all aspects of the future business.

Well aware of the issue of ‘range anxiety’ and access to recharging facilities, Proton Edar will also be looking at ways to develop its own recharging network as well as public facilities. Additionally, there is also the possibility of a mobile recharging service which could be offered in rural areas where the recharging network might not cover adequately.

Initially, the annual volume is expected to be 800 to 1,000 units in Malaysia, with a forecast of 10,000 units by 2027. Bookings might be accepted from May next year as the first shipment of cars is expected during the second quarter.