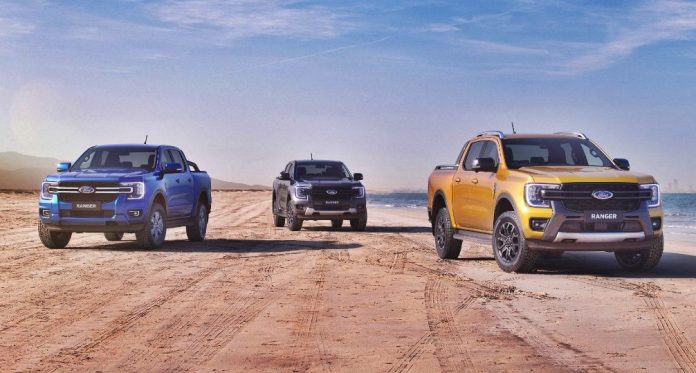 To Ford, the lives of the occupants of a pick-up truck like the Ranger are no less valuable than those in a passenger car, and require the maximum level of protection that can be provided. For this reason, the next-gen Ford Ranger pick-up truck comes with some of the latest in crash protection features and driver assistance technologies.

Post-Collision Braking
[Available on Ranger WildTrak/XLT Plus]
In the immediate moments following a collision, the vehicle may be headed in an unpredictable direction. It could hit another object – a lamp post or another vehicle. To reduce this risk, the next-gen Ranger has Ford’s post-collision braking system which automatically applies the brakes after a collision. The system automatically engages with moderate brake pressure when an initial collision has occurred, so the vehicle will come to a standstill and avoid a secondary collision.

Pre-Collision Assist
[Available on Ranger WildTrak/XLT Plus]
Pre-collision Assist uses both the new, wide-view windscreen-mounted camera and radar located near the front bumper to scan the road ahead to detect a potential collision with another vehicle, pedestrian, or cyclist directly in front of the vehicle. If an imminent collision is detected, the system emits an audible and visual warning. If the driver’s response is not sufficient, the Automatic Emergency Braking (AEB) system will activate automatically.

The AEB system has been enhanced with cyclist and pedestrian detection capability as well as the ability to provide AEB support at an intersection in some instances, thanks to the addition of the new, wider camera coverage. Whenever a possible collision is detected and the fails to take corrective action, the vehicle will apply the brakes automatically.

Before the AEB activates, the driver will get a Forward Collision Warning, an audible tone which will be very evident because the audio system (if on) will be muted. If the driver does not respond correctly, ie slow down or brake, then AEB will activate.

Evasive Steer Assist
[Available on Ranger WildTrak]
A segment-first feature in the next-gen Ranger is Evasive Steer Assist which also helps prevent potential collisions. In the event a vehicle in front is too slow or has stopped, the Ranger driver can get additional assistance in the steering to steer around the hazard. This will be valuable when braking alone cannot fully avoid the collision. The advanced system is designed to operate at both urban and highway speeds and employs the same camera and radar used with the Pre-collision Assist feature.

Reverse Brake Assist
[Standard on Ranger WildTrak]
Reverse Brake Assist helps the driver to avoid or mitigate potential collisions while reversing. The system may detect moving vehicles or stationary pedestrians and objects behind the Ranger. While some other systems may only alert the driver, the system in the next-gen Ranger will automatically apply the brakes to briefly stop the vehicle, should the driver not react in time.

Cross Traffic Alert
[Available on Ranger WildTrak]
Tricky reversing situations are a little less stressful with the next-gen Ford Ranger’s Cross Traffic Alert system. When the driver shifts into Reverse, the system is active, and will alert the driver of a vehicle approaching from the sides, when reversing out of a driveway onto a street, or even from a busy supermarket parking spot.

Adaptive Cruise Control with Stop-and-Go
[Available on Ranger WildTrak]
Adaptive cruise control with stop-and-go is more advanced than just cruise control. It is an intelligent feature that maintains a safe gap with a vehicle ahead whatever the cruising speed is set at. This is done by scanning the road ahead with the camera and radar and if there is a vehicle, the speed will be adjusted.

The system in the next-gen Ranger is even more advanced that many Adaptive Cruise Control systems as it operates down to standstill. With other systems, the cruise control will deactivate below a certain speed. The Ford system can slow the vehicle right down to standstill when necessary, and then resume forward movement when the vehicle ahead moves on.

BLIS
Available in many passenger cars today, this system is like having another ‘set of eyes’ when performing a lane change or joining a highway. If a faster-moving vehicle enters the Ranger’s blind spot zone, BLIS will alert the driver via a small light on the side mirror (left or right), so they know not to change lanes.

Next-Gen Ranger In East Malaysia
After journeying around Peninsular Malaysia on a series of previews before it has its official showroom launch, the next-gen Ranger will cross the South China Sea to East Malaysia.

Sime Darby Auto ConneXion (SDAC) will hold previews at Vivacity Megamall in Kuching, on September 7 – 11, and at Suria Sabah Shopping Centre in Kota Kinabalu on October 5 – 9, 2022.