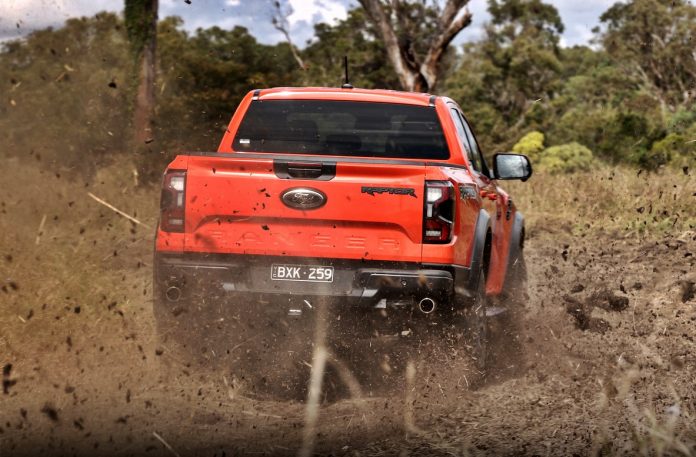 One of the pleasures that driving enthusiasts enjoy is the ‘music’ from the exhaust of their cars. It can convey emotion and form part of the car’s character, especially with sportscars. Some manufacturers have their engineers spend a lot of time and effort to ensure that the car has a sound unique enough to become an aural signature that signifies the presence of the car near or far.

Generally, the growls or roars have been associated with sportscars but now, Ford is also bringing a new feature to truck owners which will allow them to customise the exhaust sound in various ways. It’s made possible by the new active valve twin exhaust system fitted to the 3-litre twin-turbo V6 engine of the latest Ranger Raptor.

The system is designed to control the noise emitted from the powerful engine by adjusting the opening of valves – much like a saxophone or a large pipe organ – to change the sound. The driver can select sounds in 4 different drive modes: Quiet, Normal, Sport or Baja. The Baja mode is very loud and Ford reminds owners that it should only be used in off-road conditions.

“For the new Ranger Raptor, we wanted to really make the character of the truck come alive, to emphasise the power and define the presence of the vehicle, but not make it tiring when it didn’t need to be. We spent hundreds of hours tuning and developing the sound of the vehicle and really think we have something that sounds right for the truck,” said Justin Capicchiano, Ford Performance and Special Vehicle Engineering Manager.

Avoiding upsetting the neighbours
One of the key features customers love most about performance vehicles is their powerful exhaust note. And while that exhilarating sound is appropriate on the motorway or out in remote areas, it might be considered ‘irresponsible’ in a residential area, especially early in the morning or late at night.

By selecting Quiet mode, owners can keep the exhaust sound to a minimum. Even better, it is possible to schedule a ‘quiet start’, which sets the Ranger Raptor to always start in Quiet mode. Alternatively, a quiet time (with start and end times) will also be helpful for owners to keep their friendship with neighbours.

Switching between modes and sound
Changing the exhaust sound requires just the press of a button on the steering wheel that looks like an exhaust pipe. The first press displays a pop-up message on the digital instrument cluster of the selected mode, while pressing the button again allows changing to another selected exhaust mode.

“There’s a lot involved in the science of sound, and we wanted the Ranger Raptor to sound the way it looks and drives. The team had to consider and model everything from the whistle produced by the turbochargers to filtering out prolonged tones when driving at a constant speed,” said Capicchiano.

“From computer modelling to physical prototypes, the intention was to create a distinctive and emotionally exciting engine note that will have the hair standing up on the arms of those who hear it. We want you to know it’s a Ranger Raptor driving down the road before you see it,” he said.

To know more about the Ranger Raptor, visit www.sdacford.,com.my.