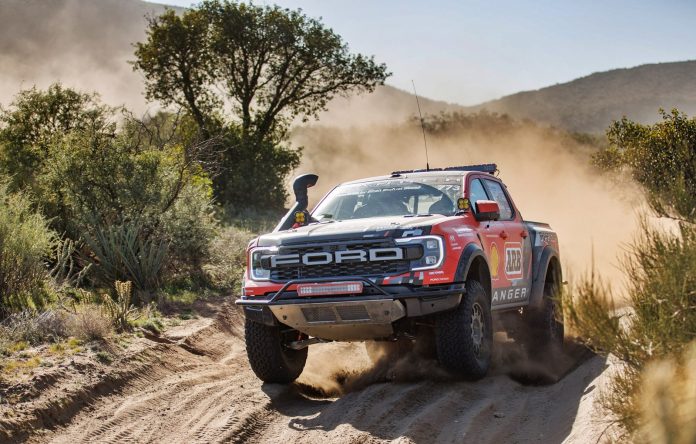 Remember the news about a new Ford Ranger Raptor being entered in the SCORE-International Baja 1000? Run in California, it’s one of the world’s toughest off-road races and just making it to the end in one piece is an achievement.

The Ranger Raptor – prepared in Australia for desert racing but still quite standard and even road-legal, finished its class in first place. And it was still in such good condition that the team decided to drive it back to its home base. In 2017, a stock F-150 Raptor also did the same thing.

Completing the nearly flawless run across the desert, the Ranger Raptor ran on low-carbon biofuel (blended with ethanol and bionaphtha) from Shell which is one of the approaches being taken for sustainability of combustion engines. The powertrain has no problems and required only basic maintenance and systems checks, besides refuelling stops, over the hundreds of kilometres of rough, dusty terrain in high temperatures.

“That’s the Baja 1000, one of the toughest off-road races in the world,” said Mark Rushbrook, Global Director, Ford Performance Motorsports. “It’s a key providing ground for Ford Performance for our vehicles to earn the badge of Raptor. This effort has been a global effort for Ford Performance from the beginning, with Ford Australia having done the design and initial development sign-off, then shipping it to the USA [from Australia] and working with all of our partners to pool all available resources for this common goal. It takes a great truck and it takes great people. We’ve proved that we have both of those on a global level.”

“It was truly awesome!” said Brendan McGinniskin, Motorsports Supervisor, Ford Performance Australia. “Spending the night out there chasing the truck was something I’ve never experienced before, and it was such a different experience of going racing. It was so cool and wouldn’t have been possible without all of the expert chase crews we had out here. Everyone pulled together and not even the few tense moments we had were going to stop us from crossing the finish line together.”

The Ranger Raptor is part of the latest Next-Generation Ranger range that has been introduced in many markets, including Malaysia. As the most rugged Ranger with high performance, the Ranger Raptor has used a lot of Ford’s long experience in Baja races. So much that one of the 7 selectable Terrain Management modes is called the ‘Baja’ mode, which is used for high-speed travel over rough ground. When the Baja mode is used, even the roar through the exhaust system rises many decibels (and should only be used in open areas).

While there are some trucks that are modified to be more powerful and more capable with aftermarket accessories, the Ranger Raptor comes straight from the same factory in Thailand that builds the other Ranger versions. It is powered by a 3-litre V6 EcoBoost 397 ps/583 Nm petrol engine and is priced from RM259,888. To know more or to locate a showroom to make a purchase, visit www.sdacford.com.my.