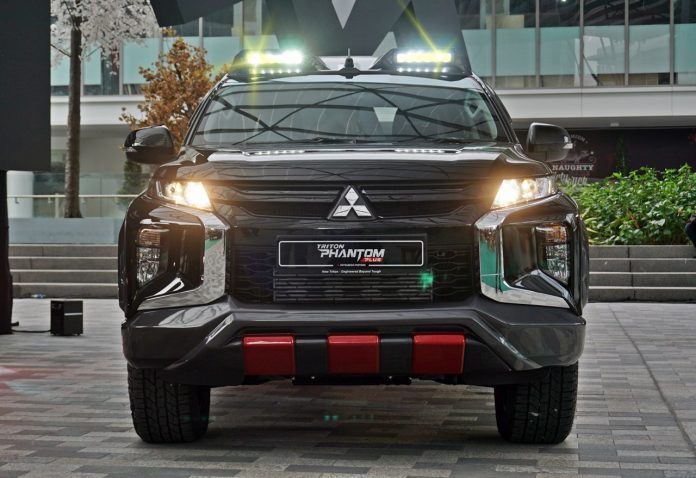 Like many other car companies, Mitsubishi Motors Malaysia (MMM) has been quiet over the past two years due to the pandemic. Now that things are gradually returning to normal, the company is also resuming its activities and to start off, it has introduced a limited edition of the popular Triton pick-up truck. Known as the Triton Phantom Plus Edition, only 1,000 units will be available for sale (imported CBU from Thailand) and all come in a bold Jet Black Mica finish.

Priced at RM139,700 (excluding insurance, Peninsular Malaysia registration), the Triton Plus Phantom Edition is positioned below the flagship Triton Athlete model, having similar features and equipment as the Triton Premium. As with the other Triton versions, Mitsubishi Motors Malaysia offers a long warranty of 5 years or maximum of 200,000 kms.

While the exterior styling is essentially similar to the top versions of the Triton range, the limited edition model stands out with the spotlights on the roof of the double cab. Inspired by the Triton Absolute concept truck displayed in Bangkok two years ago, the spotlights are developed locally and their fitment has been approved by the JPJ.

The spotlights, which are in narrow LED strips on the left and right side of the lead edge of the roof, provide powerful additional lighting which would be useful in off-road situations. They are wired to the headlights and will only be available when the high beams are in use. There is also a separate switch to keep them off if not required.

The Triton Phantom Plus Edition can also be identified by the red accents on the front and rear skidplates as well as more distinctive bodyside moulding on the front and rear doors. The sports bar behind the cab has a matte finish and at the rear end, the tailgate has ‘PHANTOM’ moulded into it along with ‘PHANTOM PLUS’ decals on the sides.

Below the muscular wheelarches are 18-inch alloy wheels finished in a gloss black, with Yokohama Geolander all-terrain tyres fitted as standard.

The Triton has always had a stylish and spacious cabin for 5 persons and for the limited edition, there are sportier seats with leatherette upholstery and carpet mats with red accents. To emphasis the limited edition status, the PHANTOM name is also incorporated on the seat upholstery.

For management of the infotainment system, there’s a 9-inch touchscreen in the centre of the dashboard. For those with compatible smartphones, it’s possible to transfer favourite apps to the screen using Android Auto or Apple CarPlay.

The technical aspects of the model are the same as the other Tritons with a 2.4-litre MIVEC turbodiesel engine  which produces 181 ps/430 Nm max torque. Variable Valve Timing enhances efficiency to extend the cruising range of the Triton.

The 4×4 system is the same as the other Tritons with a gated shifter and selection of the 2H, 4H and 4L ranges done with an Easy-Select rotary knob. This is a lot more convenient than the old trucks which required operating a second lever. For more control over gear selection, there is also a sequential manual mode. There’s also Hill Descent Control to help when going downhill whereby the computer will manage the speed and the driver just has to concentrate on steering and avoiding obstacles.

Besides the Triton Phantom Plus Edition, there are 6 other Triton variants to choose from, with prices ranging from RM81,390 to RM146,600. Those in the Kuala Lumpur/Selangor area can see the Triton Phantom Plus Edition and other models at a roadshow at Pavilion Built Jalil from today until Sunday (August 7). There are also stalls selling camping gear at the roadshow for those who want to pick up such items for adventures with their truck.

To know more about the Triton and other Mitsubishi models, or to locate a showroom in Malaysia, visit www.mitsubishi-motors.com.my.