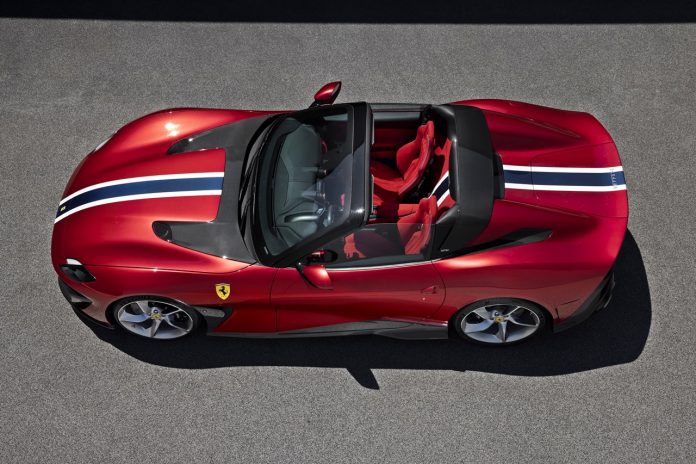 Ferrari is an exclusive brand and owning one is already something special. But for those who must have ultra exclusivity, the company’s Special Projects programme will create a ‘One-Off’ model that is literally one-of-a-kind in the world. Each of these unique Ferraris will take around 2 years from start to finish and the latest example is the SP51.

Commissioned for a customer in Taiwan, this latest addition to Ferrari’s One-Off series was designed by the Ferrari Styling Centre and sits on the 812 GTS platform. The front-engined V12 spider’s most striking characteristic is its total absence of a roof, making it an authentic roadster in every respect.

More than just taking the roof off
Creating a roadster is not as simple as leaving the roof off. The absence of the roof makes it a big challenge for the designers who must spend a lot of time doing wind tunnel studies and dynamic testing. It’s not just to ensure comfort in the cabin but also the same standard of acoustic comfort and wind feel as the car that inspired it.

The SP51’s styling has muscular, undulating surfaces formed with extensive use of bare carbonfibre. The trim on the bonnet is particularly striking as it dynamically frames the two air vents.

Another of the SP51’s features is its new Rosso Passionale 3-layer paintwork. This special colour was developed specifically for the car and gives it an elegant yet imposing character that also exudes authority. This is further enhanced by the blue and white livery inspired by a legendary 1955 Ferrari 410 S which not only runs the length of the car, but is also referenced in the interior.

At the front, specially-designed headlights give the SP51 an instantly recognisable and forceful identity all of its own. Also noteworthy are the wheels, which are specific to the car and have carbonfibre wing profiles on each of the spokes which also feature a sophisticated tone-on-tone diamond-cut finish on the forward-facing section.

The rear of the car is dominated by an arched theme with the taillights inset below the spoiler. Immediately behind the cabin are two flying buttresses that are visually softened by two deep carbonfibre scoops.

Between these two elements stretches a transverse, carbonfibre wing, the profile of which folds over the buttresses. The resulting effect is vaguely reminiscent of a Targa-type car in which the flying bridge elegantly conceals the anti-roll hoop, a nod to the solution adopted on Ferrari’s early-1960s Sports Prototypes.

One was the decision to use the same Rosso Passionale colour for the exterior as the main colour for the Alcantara trim, and the effective idea of extending the lengthwise exterior livery into the cabin. Its white and blue stripe, in fact, both appear on the central tunnel and the fascia between the two seats on the firewall, as well as on the steering wheel stitching.

The special finish for the door panels, the lower section of the dashboard and the sides of the seats, comprising a blue Kvadra insert with white cross-stitching, also picks up the livery. Glossy carbonfibre trim has been extensively used throughout the interior where it pairs very harmoniously with the Nero Momo Opaco elements.