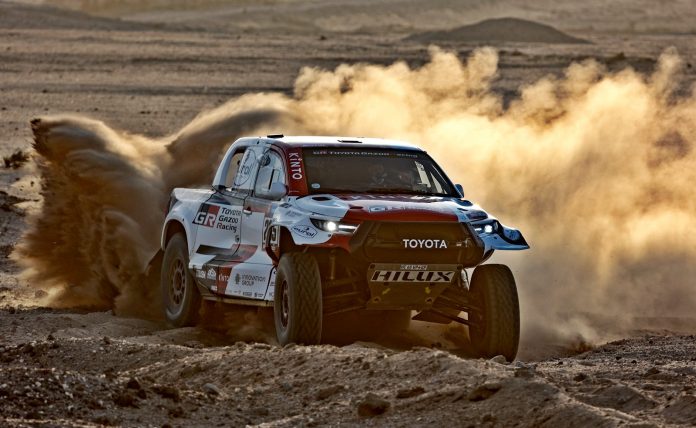 With three weeks remaining until the start of the 2023 Dakar Rally, the TOYOTA GAZOO Racing (TGR) is making preparations for its 3-vehicle team’s entry in the first round of the World Rally-Raid Championship (W2RC) 2023 season. The team will have reigning masters, Nasser Al-Attiyah and co-driver Mathieu Baumel, with newly crowned South African Rally-Raid Champion Giniel de Villiers and co-driver Dennis Murphy, as well as Henk Lategan and Brett Cummings.

The 2023 W2RC starts with the Dakar Rally in January, and will be followed by the Abu Dhabi Desert Challenge at the end of February; the Sonora Rally in Mexico during April, and the Desafio Ruta 40 in Argentina at the end of August. The season will draw to a close with the Rally of Morocco, again scheduled for mid-October. Al-Attiyah and Baumel will compete in all the rounds.

Campaign in South Africa as well
The two remaining crews will compete the rest of the season in the South African Rally-Raid Championship (SARRV) as part of TOYOTA GAZOO Racing South Africa, which also serves as a key component in the ongoing testing and development of the GR DKR Hilux T1+. In 2022, the 7-round series was won by Giniel and the former champions Henk and Brett finished second in the championship considered one of the world’s toughest rally-raid series.

The tough 2022 racing season offered TGR comprehensive opportunities to improve the Dakar-winning GR DKR Hilux T1+. The team capitalised on more than 25,000 kms of racing and testing completed by its crews in both the W2RC and SARRC.

Revised regulations for 2023
For the 2023 season, the FIA has adjusted its criteria aimed at balancing the performance between the Class T1+ vehicles, and their counterparts in Class T1U (ultimate). The primary focus of the updated rules is to tighten the field, making competition even tougher. For example, both the Class T1+ and T1U cars have had their peak power output reduced by 41 hp. The power curves have been adjusted to blend the change proportionately, and the altitude compensation for turbo powered T1+ cars has been removed.

At the same time, TGR has been constantly upgrading the GR DKR Hilux T1+, with the aim of improving its quality, durability and reliability even further, ensuring that the car is fully prepared for the tough conditions of the Dakar Rally, the W2RC and the SARRC.

As such, improvements have been made to the differentials, suspension parts and wishbones, which have been reinforced. The single damper setup has also been optimised, as has the transmission’s shifting characteristics. Finally, the software has been tweaked to accept the latest racing fuel, and to ensure that the car conforms to the Balance of Performance requirements as set out by the FIA.

Private teams
The team’s commitment to the development of the GR DKR Hilux T1+ is reflected by the privateer racing community, with 7 privately entered versions of the vehicle listed for Dakar 2023. These vehicles sport similar set-ups and specifications to the GR DKR Hilux T1+ used by the factory entry.