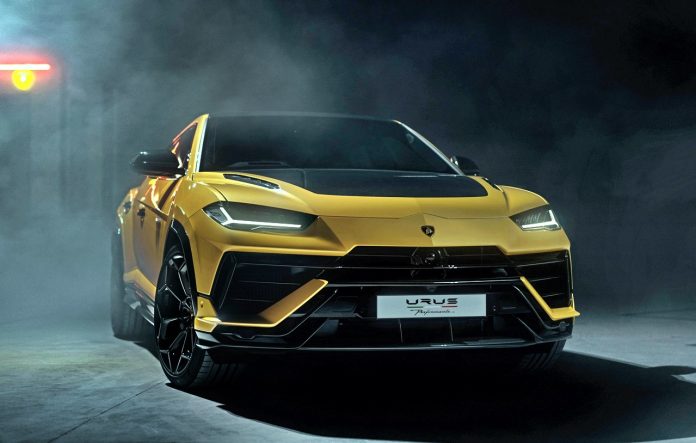 Ever since Lamborghini launched its first SUV, the Urus, sales have been exceptionally high and propelled it to become the bestselling model for the Italian sportscar maker. In fact, in 4 years, it has produced over 20,000 of the SUVs, which makes the Urus the most successful model the company has ever produced.

But like any progressive company, Lamborghini has not left the Urus as it is and has been inspired by success to raise the bar on its Super SUV. With the new Urus Performante, there are revisions in styling and both the powertrain and chassis have also received improvements for higher performance.

“The Urus set a new standard at its launch, taking Lamborghini’s design DNA and technological talent and delivering the world’s first Super SUV for a new era. The Urus Performante sets the bar even higher for the SUV segment,” said Stephan Winkelmann, Lamborghini Chairman & CEO.

Extensive use of carbonfibre
The Urus Performante can be identified by a pure, sharper, more prominent bonnet and bumper design/ Deep cuts in the bonnet lines extend down to the new front bumper, and the bonnet has an air outlet forged from lightweight. A roof in carbonfibre is also available as an option, reflecting the Urus Performante’s extensive use of composite materials that makes it the car with the highest number of carbonfibre parts in its segment.

The front bumper and splitter in carbonfibre sport assertive new lines. There are new black front air-intakes which deliver increased engine cooling, while a new air curtain draws airflow over the front wheels. The aerodynamic design theme decreases drag to contribute to the overall aerodynamics efficiency with the newly-designed rear spoiler increasing downforce of the Urus Performante by 38% at the rear end.

In profile, the SUV’s lowered stance is accented by its prominent front, and rear wing and bumper, increasing overall length by 25 mm. The rear is equally distinctive by its purposeful high-performance design as the rear spoiler with carbonfibre fins takes design inspiration from the Aventador SVJ.

The lower rear bumper and diffuser are also in carbonfibre with a lightweight titanium Akrapovic sports exhaust as standard. This generates the characteristic Lamborghini resonance depending on the drive mode selected.

“The Urus Performante’s very bold and characterful design perfectly integrates the improved aerodynamics incorporating the front bumper’s air curtain, with significant visual differentiation including the new lightweight carbonfibre bonnet and extensive use of carbonfibre throughout reminding of its ‘Performante’ heritage. This benchmarking Urus is designed as a unique driver-oriented Super SUV,” said Mitja Borkert, Head of Design.

Ad Personam options available
Inside, the cockpit features Nero Cosmus black Alcantara as standard with a new hexagonal seat stitching design known as the ‘Performante trim’. Customers have a wide choice of options in colour and trim, with further Ad Personam customization including interior matt carbonfibre details, red door handles, and a customized kickplate with the Ad Personam logo.

A new HMI graphic, with a dedicated design for the Urus Performante, features on both the centre console screen and in a large arc across the main display.

The re-engineered drive modes allow the driver to select the perfect set-up for every surface condition to enjoy more comfort or sharper, stronger throttle response with enhanced agility. Besides the standard drive modes, there is also a new RALLY mode which provides more fun dirt tracks with amplified oversteer.

Prior to its global debut, the Urus Performante’s high level of performance was demonstrated when it set a new record in the production SUV category on the 2022 Pikes Peak International Hill Climb Road, beating the record set 4 years ago.

New steel springs lower the Urus Performante’s chassis by 20 mm, with a wheel track that is broader by 16 mm, over which wider carbonfibre wheelarches surround the new optional 23-inch or forged 22-inch lightweight wheels with titanium bolts and specially developed Pirelli tyres.

Special-developed Pirelli tyres
The tyres come alongside with an evolution of the Urus Pirelli P Zero Trofeo R. For the first time, the Pirelli semi-slick tyre has been developed to meet the characteristics of an SUV, with this particular variant developed in co-operation with Lamborghini. The result of the collaboration is a tyre with increased capability, achieving performance both on dry asphalt with high ambient temperatures and on wet surfaces with colder temperatures.