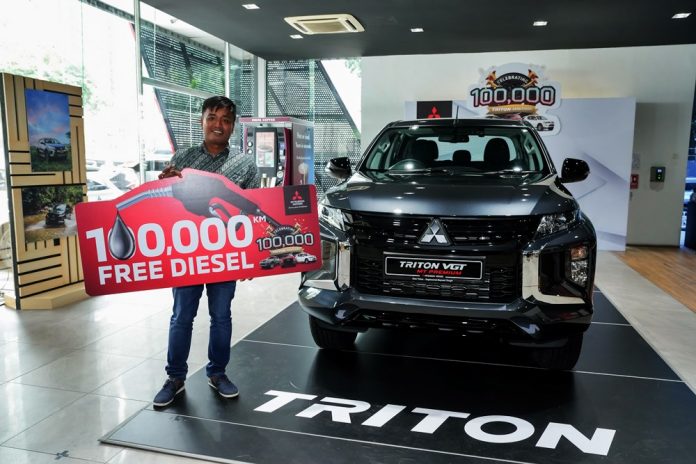 When Mitsubishi Motors Malaysia (MMM) was established in 2005, one of the models it offered was the Triton. It arrived at a time when pick-up trucks were growing in popularity as they could be registered for private use (earlier, they could only be registered as commercial vehicles). With its stylish design and Mitsubishi Motors’ heritage in the Dakar Rally, the Triton became one of the popular choices for Malaysians wanting a truck.

Recently, the company delivered its 100,000th Triton and commemorated the milestone by giving the customer, Muhammad Faerus, diesel for 100,000 kms which is worth RM27,000. Encik Muhammad Faerus, a solar panel installation contractor, purchased the Triton from EON Auto Mart, an authorized Mitsubishi Motors dealership in Kuala Lumpur.

“Since the Triton was introduced in Malaysia, it has proven to be one of the favourite pick-up trucks in the market with its rugged look, versatility, and good handling. It is capable in the harshest of off-road conditions but also perfect as an everyday vehicle. Our customers come from all walks of life – business owners, off-road enthusiasts, and lifestyle users. Over the years, with improved technology and functionality, it has inspired owners to take on challenges and push the boundaries in creating an exciting life journey, while fulfilling their dreams and ambitions,” said Shinya Ikeda, CEO of Mitsubishi Motors Malaysia, at the presentation ceremony.

Last year, despite the pandemic and competition from rivals, the model maintained a solid market share of 22% with 9,268 units sold. Six variants are available, all imported from the Mitsubishi Motors factory in Thailand. Prices (without insurance) range from RM81,390 to RM146,600.

Contest for owners
In conjunction with this achievement, MMM is running the ‘100,000 Triton Ambitions’ Contest which will commence on September 14, 2022. To participate, Triton owners need to fill up a contest survey form and submit a photo which features a Triton in it.

One winner from each of the four categories will win 25,000 kms of diesel (worth up to RM7,000) each. The contest form, photo submission, and detailed contest terms and conditions can be found at the MMM website at www.mitsubishi-motors.com.my.