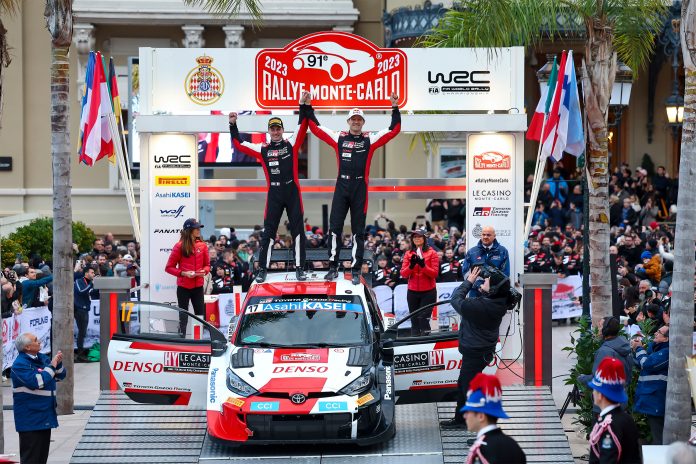 Frenchman Sebastien Ogier collected yet another victory – his ninth – at Rallye Monte-Carlo, the opening round of the 2023 World Rally Championship which ended today. Driving for TOYOTA GAZOO Racing in selected events with co-driver Vincent Landais, Ogier powered the GR Yaris Hybrid on the twisty roads in the French Alps from start to finish.

His ninth victory makes him the driver with the most Monte Carlo wins. It joins 55 other WRC wins over 3 decades, during which time he has been with the Citroen Junior Team, Citroen, Volkswagen Motorsport, M-Sport Ford and TOYOTA GAZOO Racing teams. With 8 WRC titles, he has won twice as many championships as third-ranked Juha Kankkunen, and is just one short of Sebastien Loeb.

Following Ogier was team mate Kalle Rovanpera, giving TOYOTA GAZOO Racing a 1-2 finish in the season’s opening round. From the start, Ogier had steadily opened a lead although Rovanpera worked hard to reduce the gap to 16 seconds in the closing stages today. However, Ogier drove consistently in the remaining 4 stages to finish 18.8 seconds ahead.

Besides a commendable placing, Rovanpera also collected 5 bonus points with his win on the Wolf Power Stage. This is the final stage of an event in the WRC and competitors try their best since it pays extra points that could become valuable in the course of the season. So for the young Finn, who was the youngest ever World Champion (2022) at 22 years old, it’s a good start to defend his title.

Third place was taken by Hyundai Motorsports’ Thierry Neuville in a Hyundai i20 N Hybrid. While he managed to prevent the Toyota team from claiming all the fastest time, heavy tyre wear had prevented him from getting ahead of Rovanpera and he finished 14 seconds behind.

The TOYOTA GAZOO Racing team was hopeful for a 1-2-3 finish but a puncture (which lost Ogier his chance of victory last year) cost over 40 seconds on Friday. This left him further behind Neuville, with the gap being 27.8 seconds after the final stage.

Dani Sordo and Esapekka Lappi continued to seek improved form from their i20 N Rally1 Hybrid cars on the final four stages. Sordo found a step change in performance despite battling an ongoing hybrid issue which limited power up the Col de Turini. The Spaniards ultimately finished seventh overall, one spot ahead of their team-mates Lappi and co-driver Janne Ferm. The Finns, in their first WRC event with the team, made valuable gains during the weekend as they acclimatised to their new car.

The unusual weather conditions and, consequently, those of the asphalt roads immediately raised the challenge for all the drivers from the start. They had to manage their tyres allocated to the maximum possible extent. All 18 special stages were characterised by good weather and dry road surfaces, the likes of which is rarely seen at Monte Carlo, and temperatures higher even those initially forecast.

Added to these conditions, typical of a pure asphalt race, were the risks arising from deep cuts, dirt on the road after each passage and the presence of stones on the racing line, so that on Saturday afternoon in particular the risk of tyre damage was high.

It was a good debut for the new supersoft tyres, often used by the drivers to save the soft compound tyres, as well as to deal with the specific hazards of the stages. “The drivers would have preferred a harder tyre because it was more stable but, at the same time, they appreciated the soft’s low degradation. In the end, they were able to read the situation with a good balance and make the most of what they had at their disposal, which is the main quality of a professional driver in this discipline, with so many unknown circumstances,” explained Terenzio Testoni, Pirelli’s rally activity manager.

Ott Tanak, 2019 WRC champion, who rejoined M Sport Ford this year, went easy on his soft compound tyres in preparation for an all-out attack on the Wolf Power Stage. He had an impressive start with his Ford Puma but missed out on the benchmark time by just half a second. Nevertheless, Tanak felt his finish in fifth place was a positive start with the team where he had started his WRC career in 2011,

The championship moves northwards to Scandinavia for Rally Sweden next month. It will be the only round this season with pure winter conditions so there will be lots of snow and ice to deal with.